Review:
Salt and Sacrifice
Dark Souls With a 2D Twist

Salt and Sacrifice is the sequel to the 2D Souls-like Salt and Sanctuary, so I’d like to start by talking about how it builds on the previous game.

…I’d like to, but I’ve never played Salt and Sanctuary. So, instead, I’ll have to discuss how the sequel holds up on its own.

What Is Salt and Sacrifice?

Salt and Sacrifice is a 2D action platformer, with the emphasis heavily on "action." It’s also a Souls-like, with all the usual elements thereof: You’re some variety of cursed being who drops dead whenever an enemy so much as coughs on you, but you don’t stay dead for long. 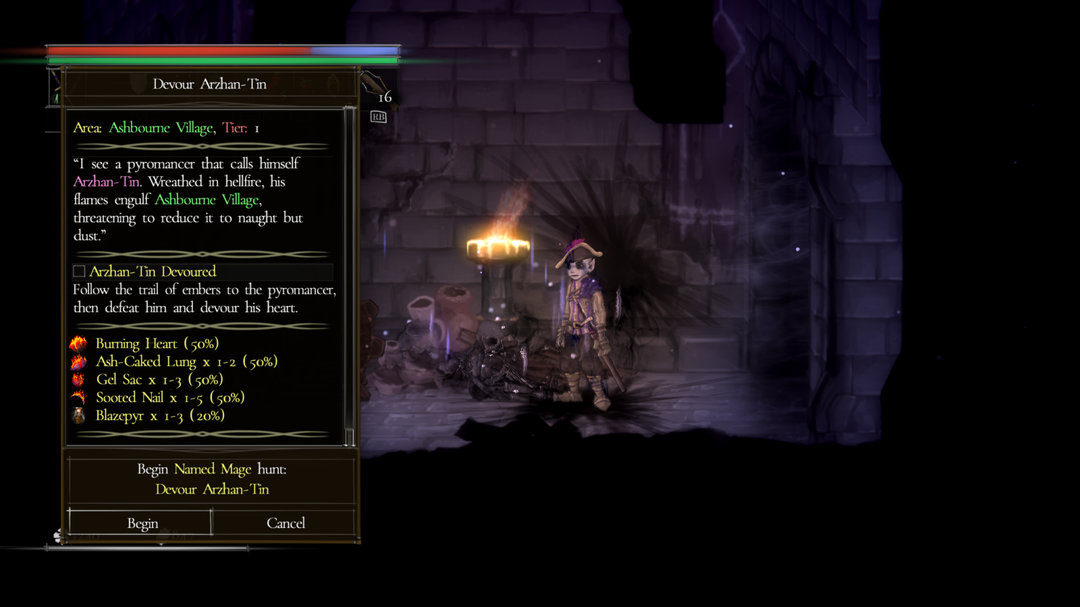 This particular flavor of curse is the Magebane Rite, which turns you into an immortal Mage hunter.

You heal up and refill your items at campfires-I-mean-obelisks, but all the enemies respawn when you do. Instead of telling you what’s going on, the game expects you to dig out the lore yourself from bits and pieces scattered around the world (luckily for me, the story isn’t connected to Salt and Sanctuary, so I’m no more clueless than everyone else). And, finally, combat is a bit on the slow side—just enough to make you rely on patterns and plans instead of twitch reflexes.

Cut me some slack, I've died eight times in the last twenty minutes.

What Makes It Interesting?

But I probably don’t need to tell you what a Souls-like is. The real question is: What does Salt and Sacrifice do differently?

The most interesting part of this game is the Mage Hunts—which is appropriate, since hunting mages is literally your job. Instead of a single boss battle, you chase your quarry all over the map and soften it up with a series of quick skirmishes. Eventually you’ll corner the mage, who will keep all the damage you dealt during the hunt, and you’ll fight it out until one of you dies. It’s an interesting twist on the usual giant boss battles of Souls games.

And then you get to craft gear out of the Mage’s body.

Side note: Mages and their minions will attack regular enemies, and vice versa. Aside from the interesting story implications, that also means that luring mages and monsters into each other is sometimes much safer (and funnier) than throwing yourself headfirst into certain death again. 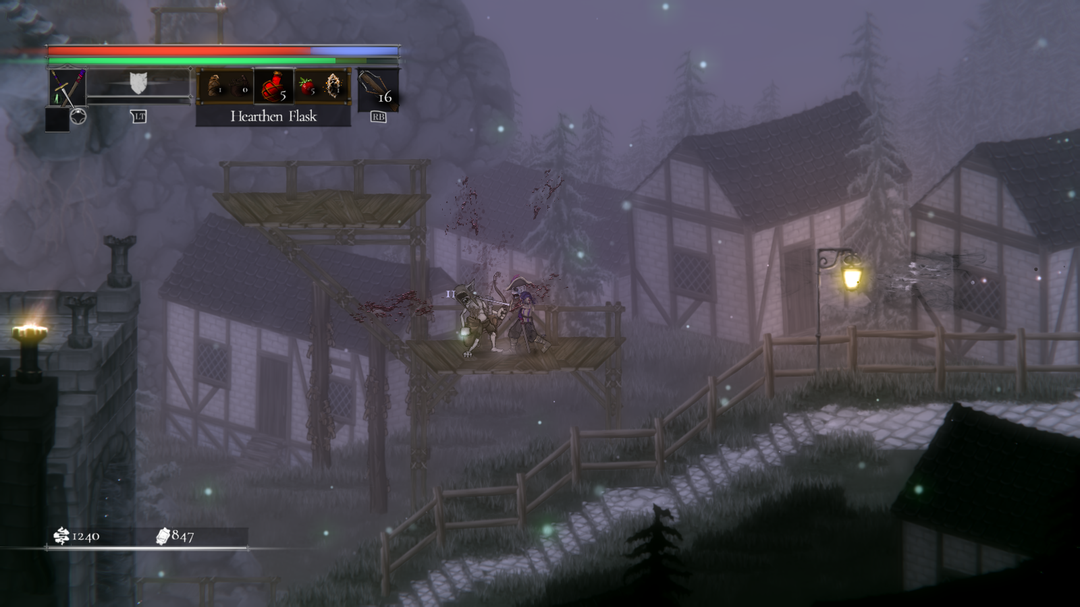 There are also some interesting mobility items that you pick up along the way, like the grappling hook that you find an hour or so into the game. Those, along with doors that won’t open until you’ve eaten enough Mage hearts, add some strong Metroidvania elements to this Souls-like.

The other major difference is that Salt and Sacrifice uses a sort of Final Fantasy X sphere grid situation to handle leveling up. Instead of just dumping points into your preferred stats, you use the points to unlock nodes on the skill tree. Most nodes are just small stat boosts, but some also let you use different types of equipment or higher levels of the equipment you’re already proficient with. Even more interesting, you also get a limited number of refund items, which let you turn a node back off and get back what you spent for it—so, say your dex-based character needed to take a point of strength just to get to a different part of the grid, you can sell that point of strength back later and reinvest in something that’ll help you more.

You do get to pick a starting class, but that just unlocks a few proficiency nodes for you at the start of the game. 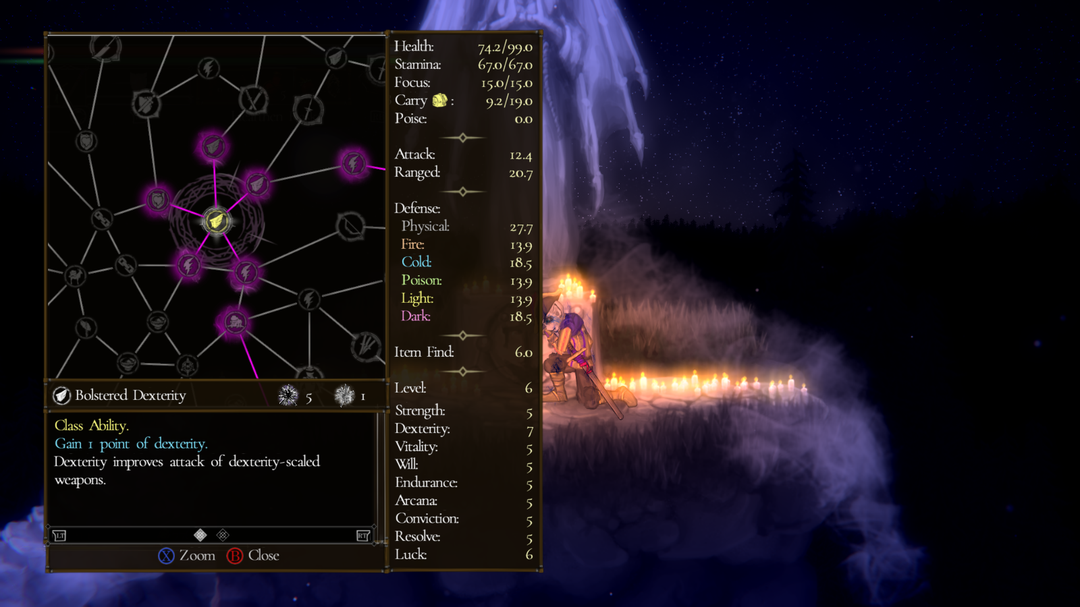 Pick your starting build, level up, realize you’ve done it completely wrong, restart the game… you know the drill.

And Here's Where the Salt Comes In

Souls-like games are supposed to be challenging, but there’s a difference between “challenging” and “unfair”; Salt and Sacrifice is often the second one. Most of the time when I died it was because I got stun-locked or juggled to death.

The biggest problem is that the invulnerability frames in Salt and Sacrifice seem to be sort of a loose suggestion. You’re only invulnerable while you’re flat on the ground, and even then not the whole time. You’re also not safe the whole time you’re dodge-rolling, so there’s a real risk of just rolling straight into another attack. There’s a reason why every platformer from Super Mario Bros. onward gives you a short “safe” window after getting hit, and this is it.

Though, amusingly, you’re completely safe while using an obelisk.

Also—not nearly as big of a problem as the last one, but still worth mentioning—the art and animation in this game are weirdly stiff and stilted. It’s not a deal breaker, but it’s definitely jarring at first. It gave me a deeper appreciation for the buttery smoothness of Flynn (the last platformer I reviewed).

To be fair, you could argue that people in Salt and Sacrifice move stiffly because everyone’s either a cursed undead or a twisted abomination. It feels like a design choice, but it still might be off putting for some players. 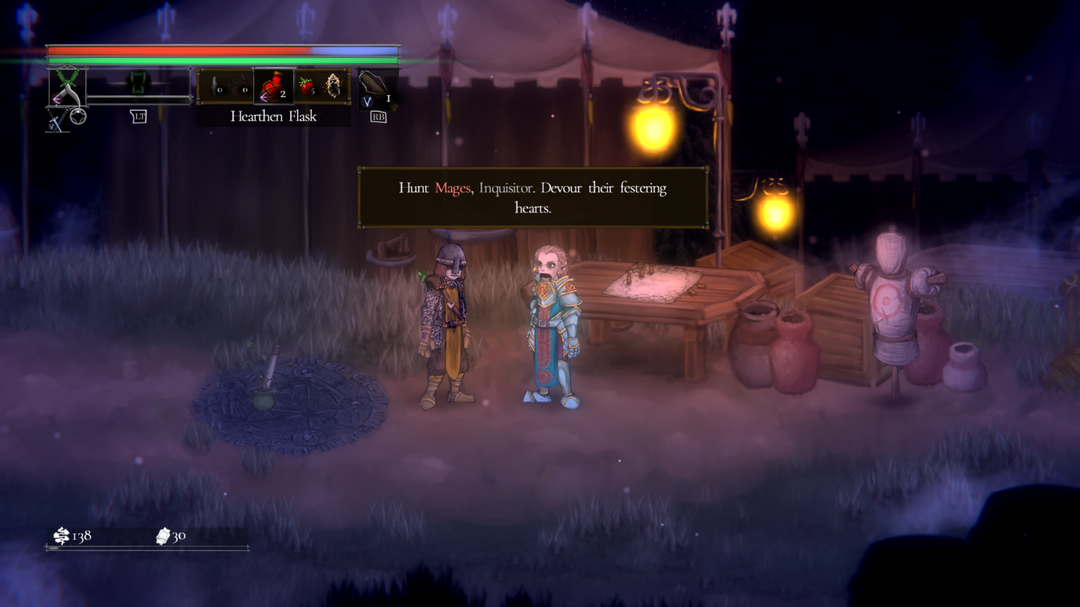 I’m not sure how you’d explain this mouth, though.

And last but not least, please give us a way to sort through the crafting menu. Just adding filters for gear we have the materials for, and gear we have the skills to use would go a long way. The core gameplay loop is fun, so the less barriers to jumping back into it, the better.

It took me some time to get into Salt and Sacrifice, but after playing for a few hours I found that I really wanted to keep playing (even with the unavoidable deaths). It may not be perfect, but it’s a great challenge to sink your teeth into and incredibly satisfying to progress through.

Overall, I’m inclined to say that platformer fans will have an easier time getting into Salt and Sacrifice than Souls-like fans—the side-scrolling could be a tough adjustment for people who are more used to modern action RPGs. Still, both of those types tend to have a bit of a masochistic streak, so a Metroidvania/Soulslike should appeal to all manner of people who enjoy the experience of breaking down brick walls with their faces.

So if you’re looking for a new type of game to rage out at, with some unique twists to the Souls-like formula—and you’re willing to bear with a couple of imperfections—Salt and Sacrifice might be just what you need.