Save the Dog, Save the World

Flynn: Son of Crimson is an old-school 2d action platformer somewhat in the vein of Shovel Knight. It is the first, and currently only PC/Console game by Studio Thunderhorse (though they did release two mobile games back in 2015).

You play as the titular Flynn, who takes his dog for a walk one day and ends up caught in a war between Rosantica—his homeland—and a twisted shadow world called the Scourge.

It’s also around this time that Flynn learns he’s a demigod who inherited a powerful magic called Crimson Energy, and that he’s the only one who can defeat the Scourge. And, just in case the stakes aren’t personal enough, the main antagonist steals four spirit orbs from your dog Dex and scatters them across Rosantica, which leaves her weak and in danger of dying.

Okay, the actual reason is that Dex is a powerful spirit guardian of Rosantica and the bad guys need her out of the way.

On his journey to save Dex, Flynn will learn to harness his Crimson Energy through various weapons, skills, and elemental effects. He’ll need every edge he can get in order to save his dog… and the world, I guess. 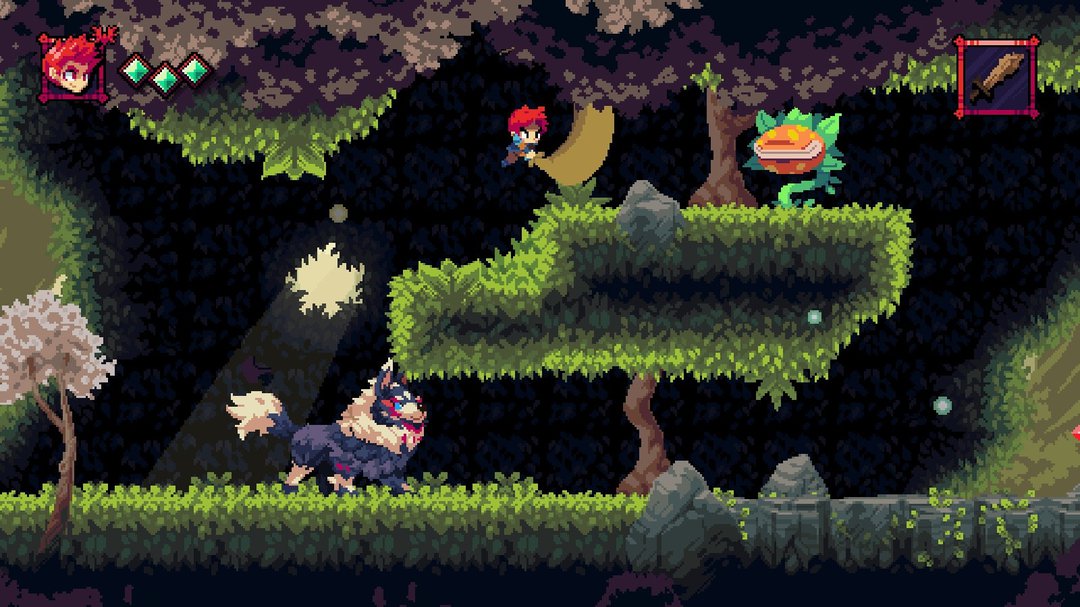 A Solid Game With a Lot of Heart

Flynn: Son of Crimson is a really solid game overall. The combat and platforming are tight, the various weapons and upgrades keep the excitement up, and the story has a couple of twists that—if not totally unexpected—at least keep things interesting.

For a bit of added risk/reward, you can search for secret level exits leading to special challenges. You can also test your platforming skills by looking for the golden relic in each level, then sell the relics for a bunch of gems to buy upgrades with. 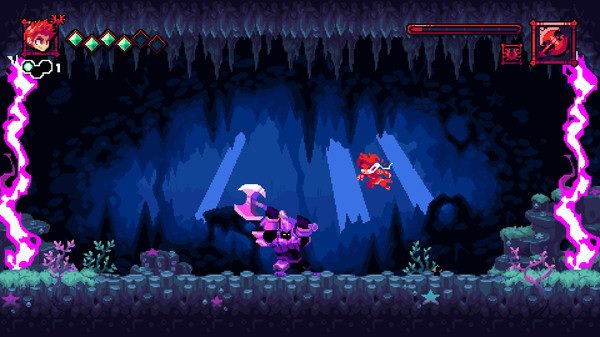 The art is a sort of pixel-chibi style that still manages to look intense when it wants to.

Strangely enough, what stood out most for me was the music: If I’d just heard the soundtrack, I would have sworn that I was listening to some of Octopath Traveler’s more chill tracks. Does the style of pseudo-orchestral music that I loved so much in an epic JRPG still work in a cute 2d platformer? As it turns out, yes. Yes it does.

Finally, Flynn: Son of Crimson comes with some accessibility features, so props for that. A particularly interesting one is the “No Player Damage” option, which lets you play through the story without worrying about skill or twitch reflexes. That sort of “story mode” option isn’t for everyone, obviously—plenty of people play games for the challenge, after all—but it’s a welcome inclusion for those who need it. 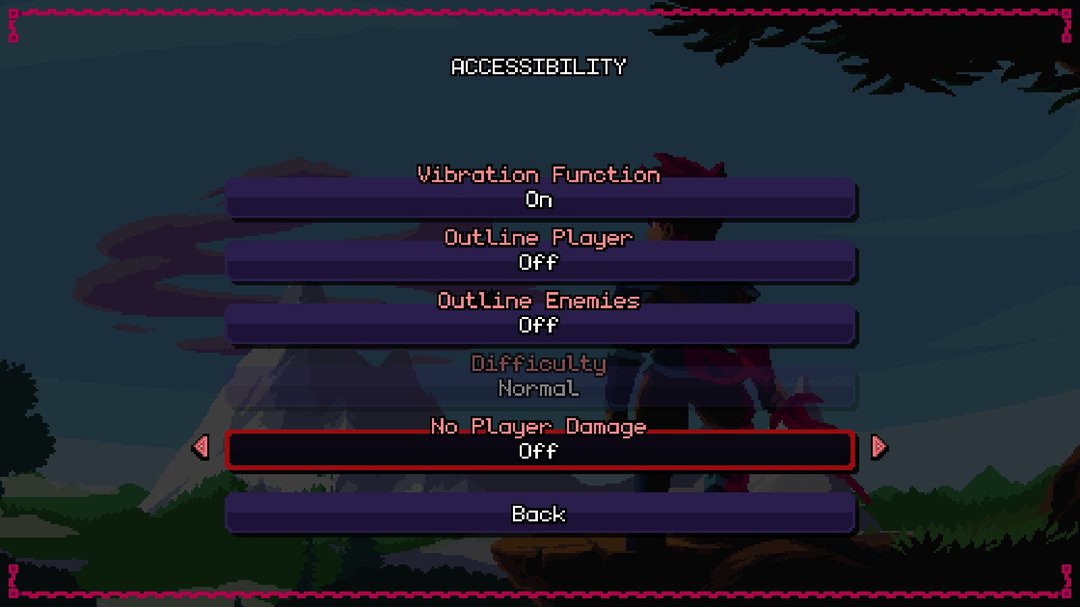 Always good to see devs embracing the idea that games are for everyone.

As I said before, Flynn is a solid game; it’s hard to point out anything really wrong with it (with one exception that I’ll get to). However, there are several things that are worth bringing up before you buy it.

For one thing, it’s over pretty quickly. I personally finished the game in less than 6 hours, which is apparently pretty average. Supposedly you can 100% it in 8-9 hours, which I haven’t done myself, but sounds about right. It’s not that the world is especially small, but you can breeze through most levels so easily that the game seems shorter than it is.

On a related note, Flynn: Son of Crimson is pretty easy. I always hesitate to make this complaint, because I grew up on Mega Man and have a reputation for being Pretty Good At Platformers™. But, since my playtime was right in line with what other people are reporting, I can be pretty confident it’s just that the game isn’t very tough, and not that I’m some kind of Flynn prodigy.

Finally—and this is the one thing I found solidly wrong with Flynn—there’s a level near the end of the game where you fly on Dex’s back. I don’t normally get motion sickness from games, but something about the motion blur in this one level made me full-on nauseated. That part is only a couple of minutes long, but if you’re already prone to motion-sickness, you might find that it’s too much for you. In fact, if I could make one suggestion to Studio Thunderhorse, it would be to add an option to the Accessibility menu to reduce or eliminate motion blur. 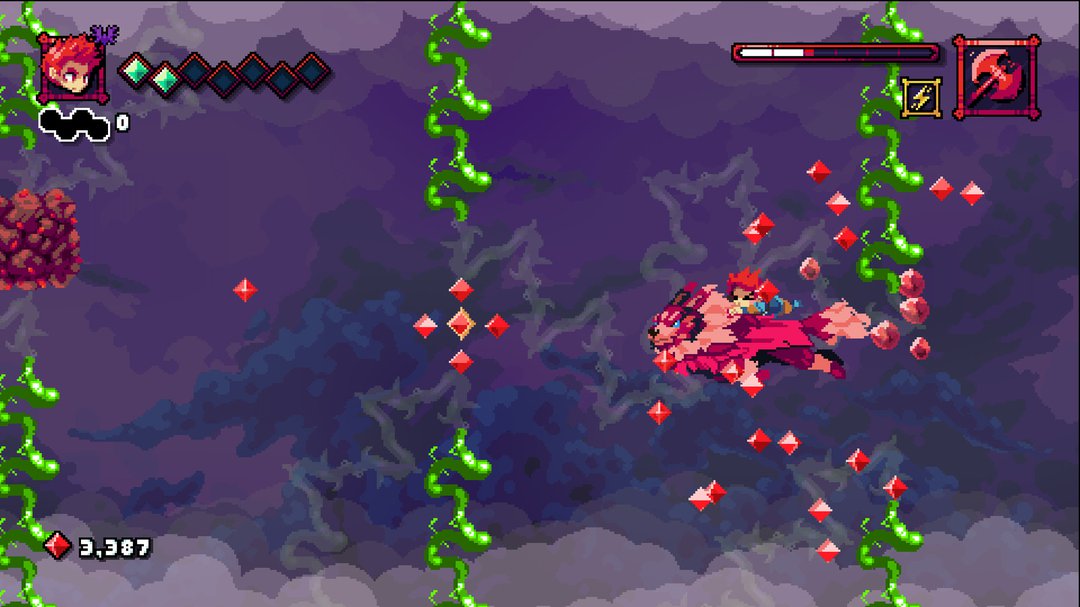 You cannot pet the dog in Flynn: Son of Crimson

Overall: Worth the Gems

Flynn: Son of Crimson has an MSRP of $19.99, which is just about right for a bit of action platforming fun; of course, you can always throw it on your wish list and wait for that price to come down even more. It’s also currently on Game Pass, so if you’ve got that, taking a few hours to play Flynn is well-worth it.