Breath Of The Wild:
A Review

Breath of the Wild

New Ideas Are A Breath of Fresh Air

Breath of the Wild is, of course, famous for being the first truly open-world Legend of Zelda game. That is, the entire world is available from the word go (sort of) and it’s up to you, the player, to decide where to go and what to do. Your mission is to defeat Calamity Ganon, but when and how you do that is entirely your decision.

In a similar fashion, the shrines and Divine Beasts are scattered around the world for you to find when and how you are able. However, when you get right down to it, the entire rest of the game only exists to make the final battle easier - you could just leave the tutorial area and run straight to the end. 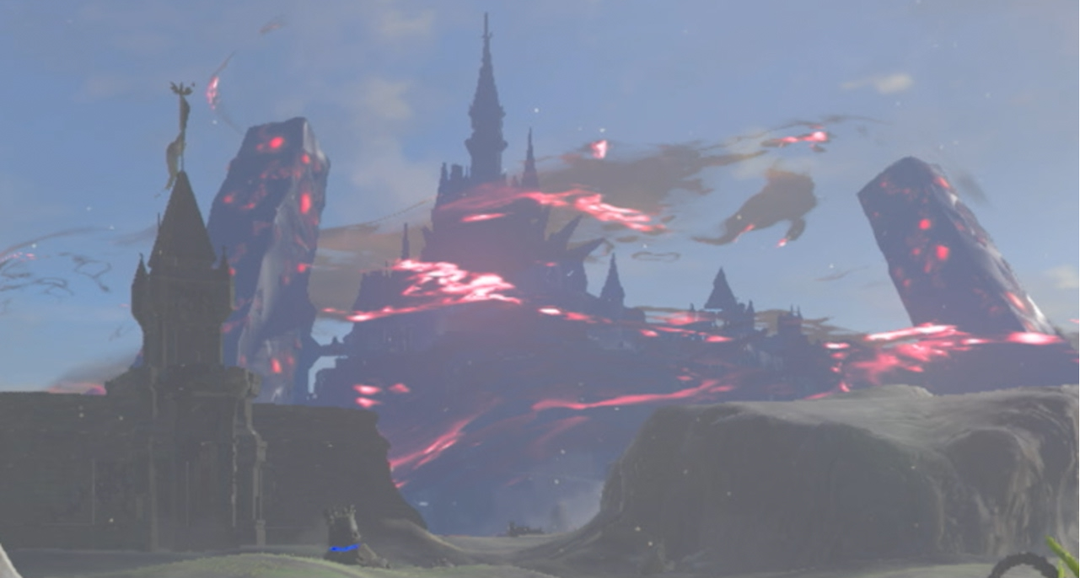 You‘d DIE, but you could do it.

This is touted as a huge departure from the traditional formula, but is it really? Yes and no. From its very first installment, The Legend of Zelda has had a pretty strong open-world flavor. True, the dungeons were numbered, but you could find and beat them in any order you were able to. The exception, of course, was the final dungeon, which you couldn’t even enter until you’d cleared the other eight. Most other games held to that pattern of a suggested - but not necessarily required - order, with a final dungeon that you couldn’t reach until you’d beaten all the others.

The major difference between Breath of the Wild and almost every other Zelda game is that they’ve removed the idea of items being used as gate-checks. That is, you need to have X item in order to access Y area. In most Zelda games the items are used to impose a sort of order onto the game, forcing you to go through the levels in a certain way. However, as any speedrunner will tell you, those are more like guidelines than hard and fast rules. Breath of the Wild has done away with that entirely, though it’s actually not the first to do so; A Link Between Worlds also allows you to access dungeons in whatever order you choose. The only major difference, then, is that you can fight the final boss whenever you feel that you’re ready.

Nitpicking aside, Breath of the Wild does have a lot to offer. This iteration of Hyrule is expansive and beautiful, ready to be explored. This time, the game has a sort of Elder Scrolls / World of Warcraft approach to quests: you have your overarching goals, but side quests and ways to advance your main quests are found (more like stumbled on) during your travels. 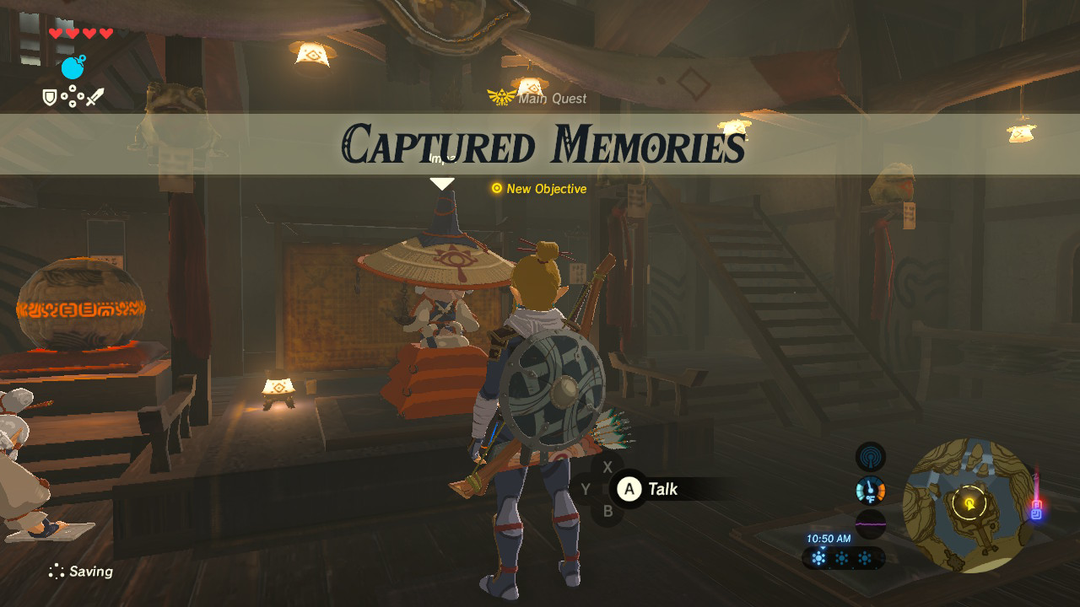 “Link, I need you to go find very specific spots and then stand in those spots.”

Link’s runes allow you to interact in new and often fun ways with the environment, and make for some truly unique puzzles. Stasis is my personal favorite rune; it’s very satisfying to freeze a boulder, build up a ton of momentum on it, then watch it fly off and bowl down your enemies when the Stasis breaks.

Speaking of enemies, Breath of the Wild has a surprisingly low number of them. Previous Legend of Zelda games have been largely about combat, fighting your way to and through the dungeons and temples in order to progress the story. There were exploration and puzzle-solving elements to be sure, but the combat was always a main element of previous titles. Not so with Breath of the Wild, which is first and foremost about exploring. This game’s formula is exploration, puzzles, and battles, in that order.

One thing about Breath of the Wild that pleasantly surprised me were the strong yet believable characters. The major characters in the game all have distinct personalities that never stray into caricatures, as a lot of characters from previous games did. Princess Zelda is strong and wise, but we also see moments of her being startled, being worried, even doubting herself. Mipha, the Zora’s champion, is kind and caring, but not afraid to stand and fight. Revali is a cocky jackass, but… well, he’s pretty much always a cocky jackass, but he does thank you once, so there’s that. The point is, the characters have depth and nuance that is rarely seen in the Legend of Zelda series. They feel real.

Finally, the cooking system is a fun addition to the game that just begs to be abused. With the right ingredients you can create dishes that make you fireproof, increase your attack power, boost your defense, or give you temporary extra hearts. Strategically cooking and eating food can give you the boost you need to get through more challenging portions of the game.

With a lot of the right ingredients, you can boost your stats by a lot.

The very same open world that Breath of the Wild is known for opens the door on a couple of major flaws. The problem with creating such a vast world is that you have to fill it with something, and in this case it’s filled with shrines. Over a hundred shrines, as it happens, each of which has a small puzzle or battle inside it. A large percentage of the gameplay goes: find a shrine, clear the shrine, get a spirit orb, turn in four orbs for a reward, repeat ad nauseam. You can see how this formula can start to get a bit old.

Also, mountains. By the goddess Hylia, I will never complain about the mountains in Skyrim ever again! At least you can go up those at a pretty reasonable pace. Link, on the other hand, climbs like a sloth that realized it’s late for yesterday’s dinner. You can go faster, but that burns through your stamina so quickly that you have to use it pretty sparingly. Bear in mind, this is all when the weather is good. Don’t even bother when it’s raining, because you’ll just slip right back down. It’s certainly more realistic than being able to just go scrambling up a mountain like it’s nothing, but realism can sometimes be the enemy of fun. 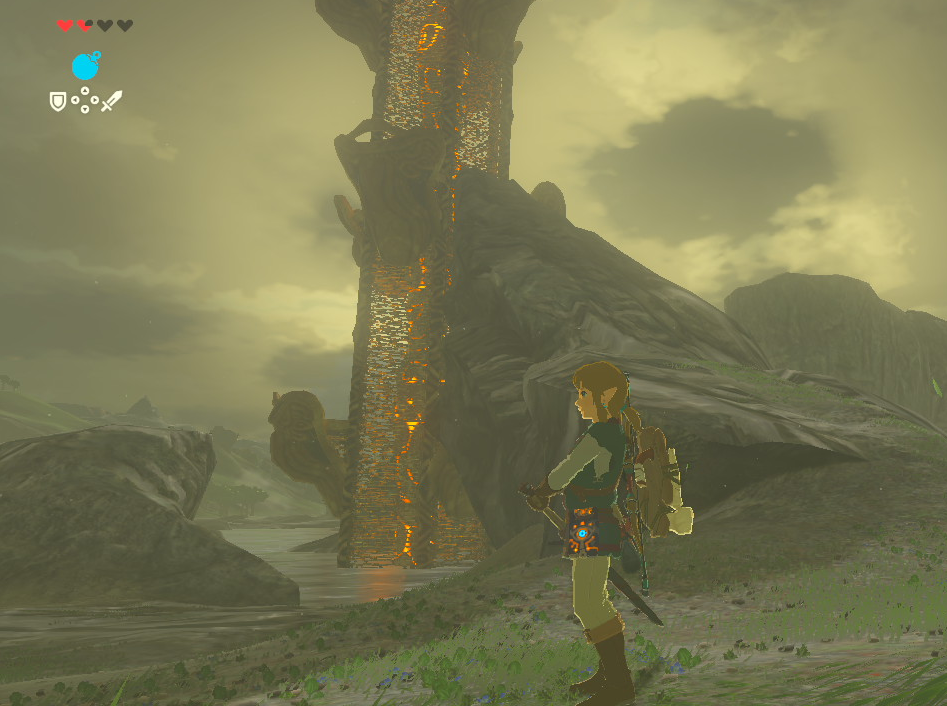 And doesn’t that tower look fun to climb? No? Well, do it anyway.

If you haven’t played Breath of the Wild yet, I have one piece of advice for you (warning, minor spoiler): [spoiler] Go northwest to the Rito city first. Not only is Vah Medoh the easiest of the Divine Beasts, the ability you get from beating it lets you launch yourself straight up, which makes the rest of the game go so much more smoothly. [/spoiler]

Also semi-realistic and not fun is the durability mechanic. Weapons and shields (though not armor, for some reason) will break after a certain amount of use. That’s hardly a new concept, and usually it means once in a while you have to go pay a blacksmith to fix all your stuff. In Breath of the Wild you’ll find that Hylian weapons and shields are made of toothpicks, Elmer’s glue, and will break after fighting three or four moblins. Bows hold up a bit better than melee weapons but still break after a couple dozen shots. This is offset a bit by weapons being found just about anywhere: stuck into the ground, stashed in treasure chests, or fallen near dead enemies. Still, it means that you have to use your favorite weapons very sparingly, because even the highest quality items won’t last long. Playing Breath of the Wild is a constant struggle to keep decent weapons on hand. 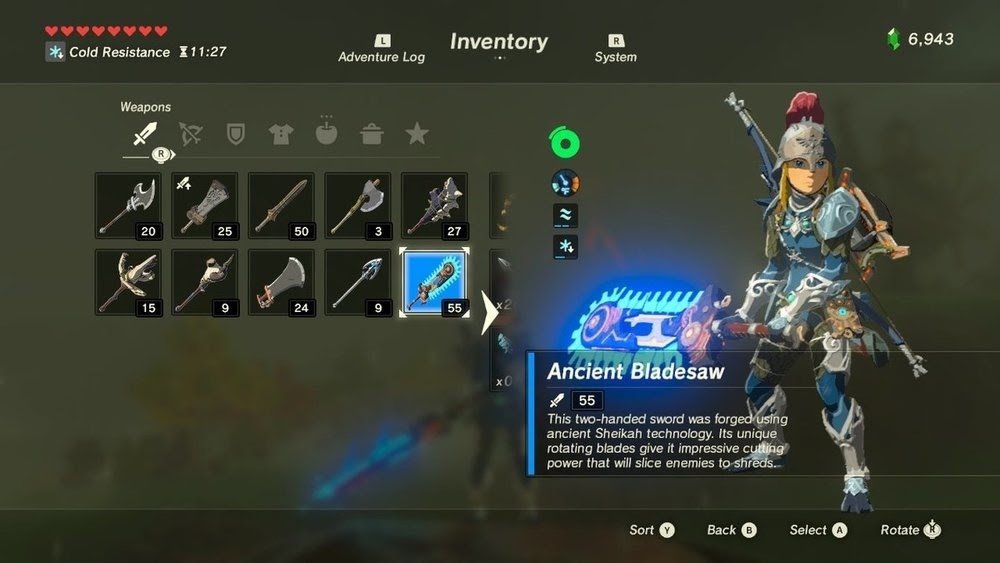 Finally, the main dungeons are a bit disappointing. There are only four of them, and they all use the same gimmicks: controlling parts of the Beasts in order to reach different areas, and activating computer terminals.

Overall, it seems like the designers got so caught up in the open-world theme that they let the usual Legend of Zelda hallmarks slip. Where are the clever dungeon designs? Where are the iconic enemies like Gohma and Dodongo? Where are the special items and abilities to let you explore the world in new ways? What should be a great game is unfortunately dragged down a bit by repetitiveness, tedium, and some misplaced realism.

Looking To The Future

Breath of the Wild brings some new ideas to the table and, in the process, hits a couple of stumbling blocks. That doesn’t make it a bad game. On the contrary, I had a great time with it overall, and it definitely earned its impressive ratings.

Given those ratings, I think it’s safe to assume that Legend of Zelda will continue exploring the idea of vast, open worlds, but I do hope that they continue to tweak the formula. Truly, tweaks are all that’s needed: Stamina-based climbing isn’t a bad mechanic; just speed it up. Durability isn’t a bad mechanic; just make it a bit more forgiving. Mini-dungeons like the shrines are a good concept, but for Hylia’s sake we don’t need a hundred of them!

Overall, I really like the direction that Breath of the Wild took the franchise, and I’d love to see these bumps smoothed out to make a truly great game. Until then, I do highly recommend picking this one up when you can, especially if you can find it on sale, but I’d stop short of calling it a must-buy. 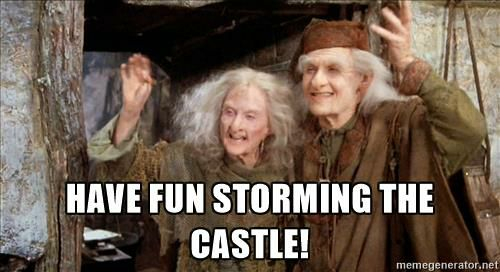 What do you think of The Legend of Zelda’s latest game? What’s the coolest thing you’ve found in the newest version of Hyrule? Leave us a comment here or on our Facebook page and let us know what you think!

If you’ve got a spare rupee or two, please consider supporting our Patreon so we can continue bringing you articles, podcasts, streams, and more.