Its Tough Ruling The World 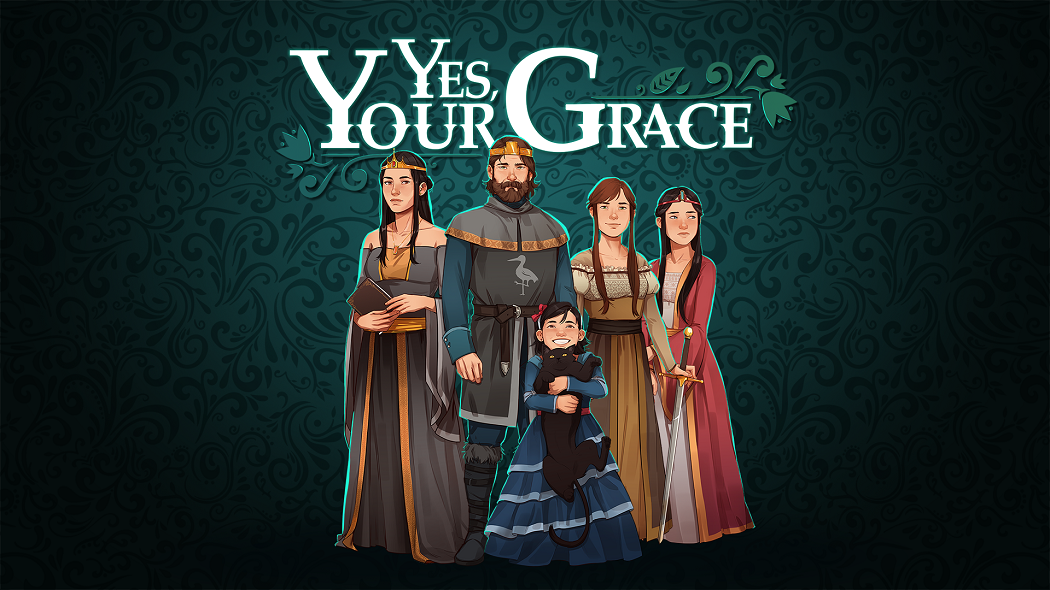 When you start playing Yes, Your Grace, you’re introduced to a dire scene - a king in a dilapidated throne room with an advisor telling him “it’s time”. The king puts on his crown and exits to the castle’s walls, which overlook an ocean of soldiers - all chanting, lighting fires, letting the king know what they’re here to do. This is the end of Yes, Your Grace, and possibly the end of the Kingdom of Davern. The result of the battle, along with the fates of everyone you meet, are in your hands.

Palpable tension is a common feeling in Yes, Your Grace

Suddenly, you are wisked back in time, to 52 weeks ago. It makes you ask a lot of questions. How will that final scene play out? Will the decisions that you make allow you to emerge victorious, or will they doom you? Will you even be able to get to this penultimate scene without going broke? It's tense in the throne room, and Yes, Your Grace demands that you take ownership of your actions, for better or worse.

Taking The Throne, Answering To The People

The main gameplay loop of Yes, Your Grace is fairly straightforward. Boiled down to its base, it’s a resource management game. You have to keep track of your kingdom’s gold, its supplies, its army and of course how happy the population is. Despite this simple description, actually playing the game is a balancing act, filled with practical choices and lunging after emotional gut decisions.

As a king, you have to balance being royalty with being a public servant. Obviously, you never have to worry about getting re-elected but you still have to keep your population happy. Yes, Your Grace is played week-by-week, and each one begins with you on the throne and petitioners approaching for assistance or to offer their services. Peasants will often approach begging for solutions to the problems in their lives - a mysterious creature stealing food here, someone throwing bits of butchered meat into the road there - and you have to decide if or how to help them. 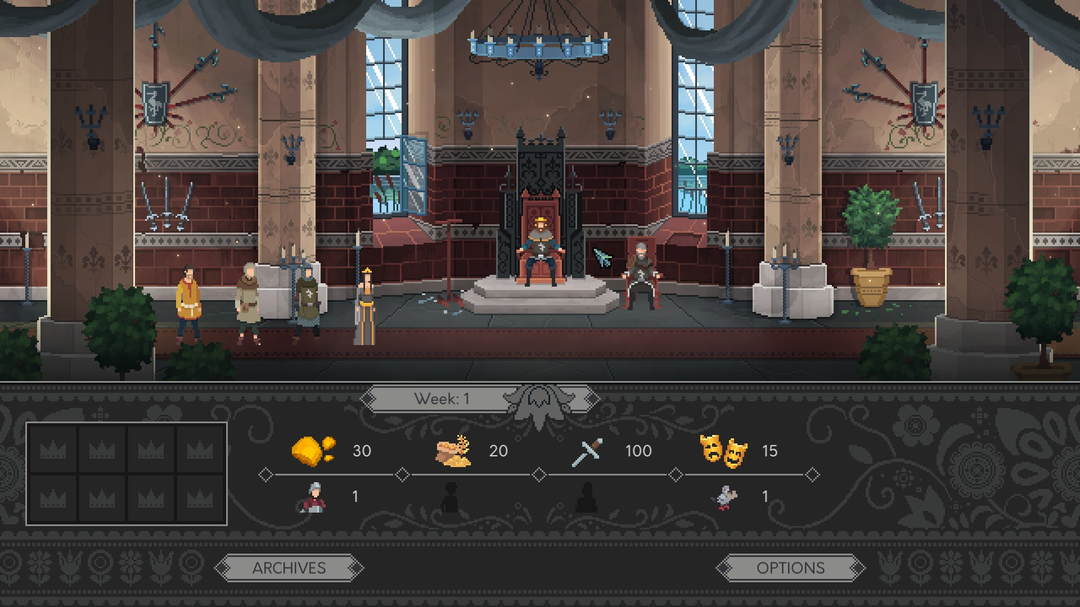 Never a dull day in the life of a King!

Peasants represent one of the biggest risks in Yes, Your Grace. They are the wild card - you never know what you’ll get. Sure, helping a flooded village might earn you their loyalty, but there are other things you could do with the supplies: battles to wage, crises to handle and overcome are just around the corner. Do you save the peasant altruistically or do you practically hoard what you have?

Of course, Yes, Your Grace distinguishes itself by adding in other questions than just a moral binary. What if they’re lying? What if there is no monster snatching up people? This is the only peasant you’ve heard complaining about it so far. Maybe you waste the supplies or not, but you have another handful of choices to make, one after the other. These judgement calls feel like small decisions in the moment, as they do a wonderful job of disguising themselves as unimportant. Don’t worry: in a few weeks time, you’ll know if you made the right choice.

There is never just one thing going on at a time in Yes, Your Grace. There’s always an upcoming deadline, a battle to be waged and prepared for or a trial to gather evidence in. The game does a wonderful job of dangling these events in front of the player, reminding them that something vaguely ominous is coming over the horizon. It’s that small reminder that granted nearly all of my decisions a second’s hesitation, giving that sense of anticipation that makes you want to keep playing to see what’s going to happen next.

Lords and Ladies, Cloaks and Daggers

Peasants aren’t the only people you’ll have to deal with: there’s a reason some of your choices with the common folk slip under the radar until it's too late. That’s because as the king of a fairly small court, it’s also your job to represent the kingdom in diplomacy. That means forging alliances, treaties and deals with the other lords and ladies of the realm - partnerships that prove endlessly beneficial to a more defenseless realm like yours. These relationships are never one sided and often leave you with timed side-quests. You can’t be bothered with these personally, but your agents are another matter entirely. Sending out assistants to do your dirty work is a nice thematic touch that makes you feel like you really are royalty, managing a kingdom outside the throne room filled with loyal subjects. Loaning your general, witch or hunter to another lord for a couple of weeks seems inconsequential when the reward is a constant stream of gold or supplies. 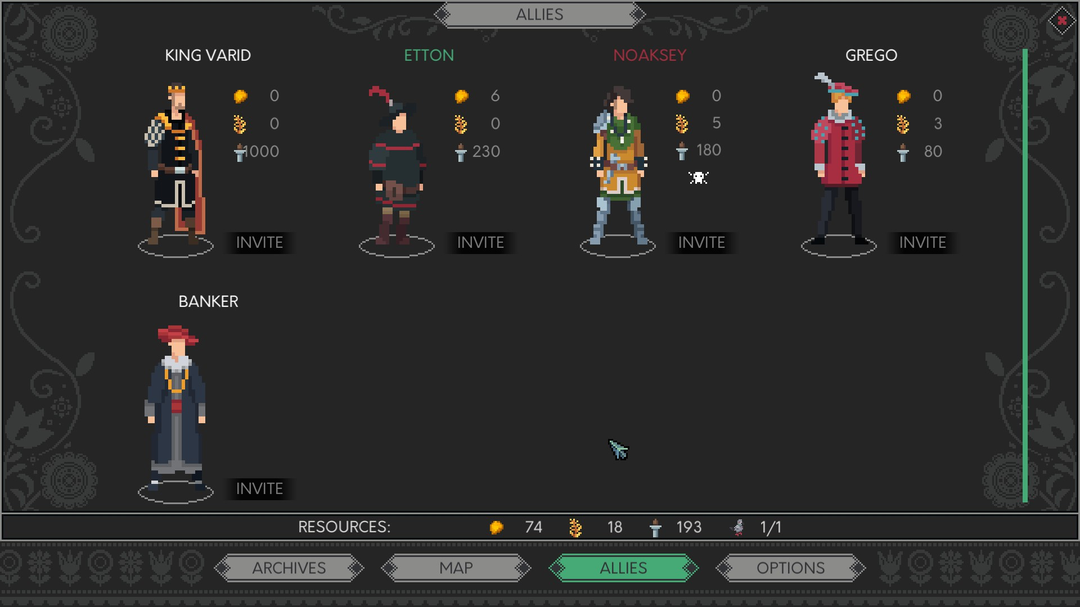 Be careful with your allies - some may not like you depending on who you side with.

That is, until someone else comes to your court petitioning for your help, and the only options you have are to send your general to solve the problem or give them resources. Yes, Your Grace constantly puts you in situations where you have to choose who receives something and who doesn’t - there will never be a situation where all sides get what they want. It’s a game of compromise, and knowing that someone will leave a situation worse for wear is refreshingly honest. Yes, Your Grace isn’t full of happy endings, and you’ll be lucky if you get one yourself.

Behind all of the resource management and stressful decision making that you have to deal with as King, you also have a family to care for. Between your wife and three daughters, making sure that everyone is happy is a job of itself. As if being King wasn’t hard enough, sometimes those managerial duties take a back seat to just keeping control of your children and their antics. 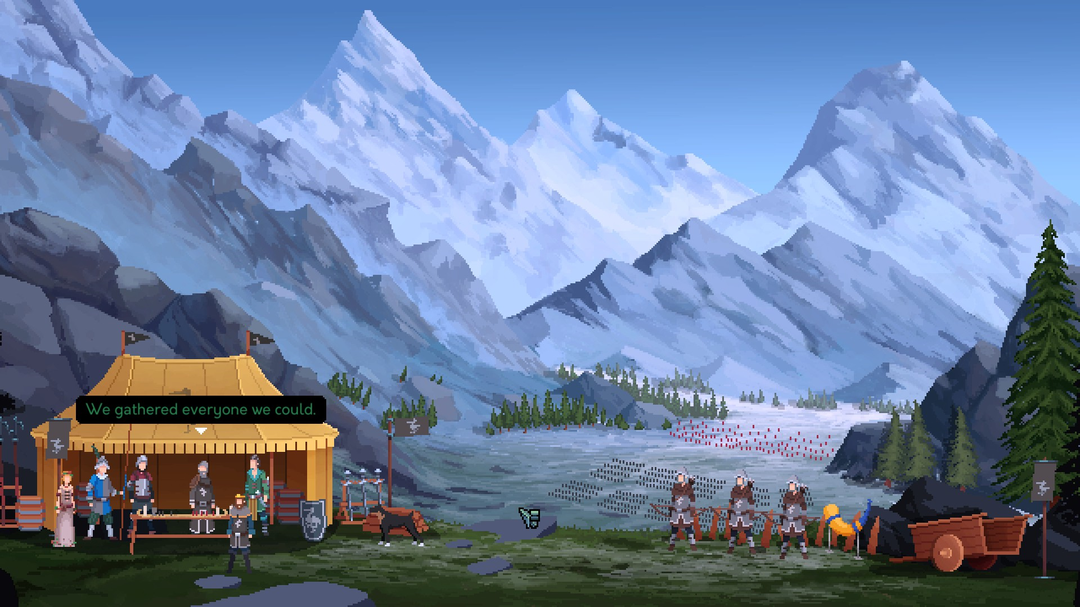 The outcome of battles like these are the culmination of your previous decisions.

You’re the father of three wildly different girls - Lorsulia, Asalia and Cedani, each with their own wants, needs and individual storylines. As their father, you play a huge part in these storylines, and if you want you can blur the lines between family and diplomacy. It should be known that Yes, Your Grace takes place far in the past, and the ugly, sexist traditions of the time period are well represented. Your children are expected by others to be quiet, out of the way and eventually married off. How you treat them is up to you; you can be whatever kind of king and father you want to be.

The royal family doesn’t just provide a much-needed look behind the scenes of a king’s life, it’s also where you’ll find most of the game’s heart. Sure, speaking with peasants about their sometimes wacky situations is funny enough, but interactions with the family are where the game’s best writing is. By the end of the game you’ll be attached to your daughters and their quirks, like Cedani’s penchant for taming dangerous animals. There are also some genuinely heartwarming moments, mostly told before the game’s most precarious situations. When the next week brings an army to the front door of the castle and you’re speaking to your wife and children for what may be the last time the pressure sets in. 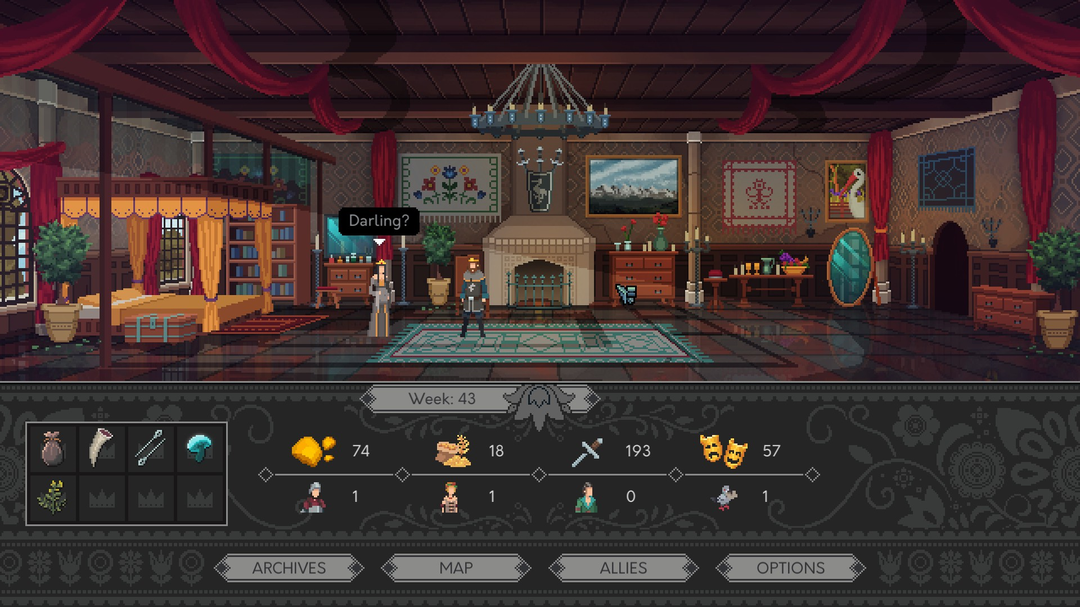 Check in on your family often, as their stories are constantly progressing.

Yes, Your Grace uses this balance between life on the throne and life as a father to raise the stakes even further. It makes you realize that it’s not just the people’s lives in your hands, but also your families’. I haven’t played many games that made me think about consequences in this way before, and it’s a testament to how well written and planned out Yes, Your Grace is.

Happy Is The Head That Wears The Crown

At the time of writing this review, I managed one full play through. By the end of my six-and-a-half hour long experience with Yes, Your Grace I was shaken and impressed. I had gotten what I thought was a good ending (no spoilers on what that entails) and thought about the decisions that got me there and what I would have done differently. Considering my ending, I don’t think I’ll pick the game back up again sometime soon, but it’s one of those titles I’ll remember fondly. 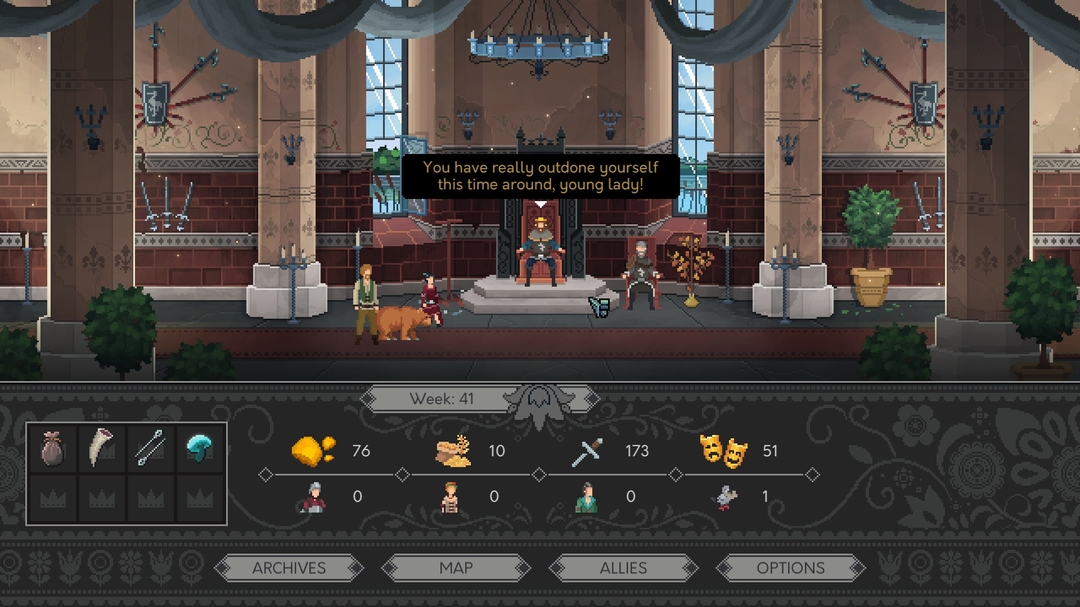 Yes, Your Grace delivers everything it promises and more. At face value it looks like a kingdom-management sim, but once you get an hour or so into it, you realize how complex everything is. All the different resources and systems are tied together with your family and what you can do for them. I made all my decisions with that realization, and all those choices suddenly became more difficult.

This is the agony and the bliss of Yes, Your Grace: every choice might matter, but some might not at all. Each choice feels like it could be the one that might catapult you into a better situation or cause you to slide backwards, and you won’t often know until much later. Managing your kingdom is easy, but keeping balance between everything is much, much harder. Yes, Your Grace is a better game for making you wait to see what your choices reveal, and eventually gives you a story that can feel personal and whole.

Simply put, I loved my time ruling over the Kingdom of Davern. Getting to know its people, from the drunkards that would ask for more coin to the travelling merchants, is a simple fun. Feeling its weight on your shoulders is more complicated. And with so many choices to make, I can see myself returning to the throne some time soon. Especially considering that my play time to completion was just about seven hours. For an experience that delivers equal parts light-hearted wit and heavy decision making, you can’t go wrong with Yes, Your Grace.