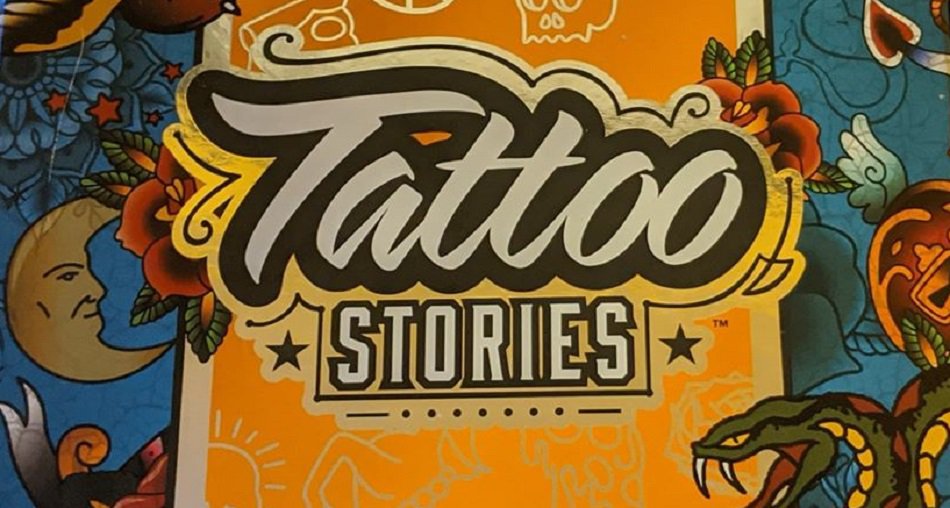 First things first: yes, this is a game by Bicycle. Yes, that Bicycle, the ones who made the playing cards that we’ve all got somewhere. They conducted market research and found that the vast majority of people who had bought a new deck of cards in the past year had also bought a board game, so branching out in that direction was a natural next step for them. They were at PAX Unplugged last year, ready to break into the industry. 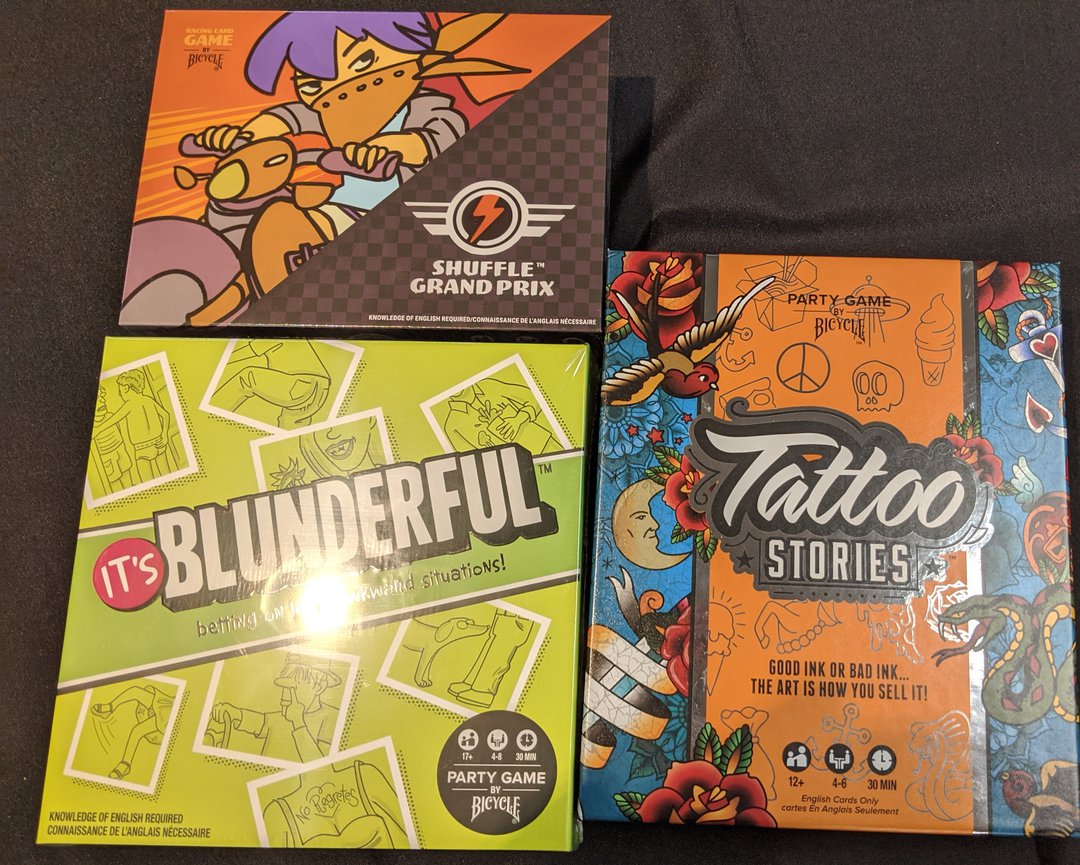 Bicycle's three new games. Check back for our thoughts on the other two!

I’ll admit the corporate logic was a little off-putting at first, since it made the whole venture sounds like nothing more than a cheap cash grab, but I was pleasantly surprised when I started playing Tattoo Stories. It was a lot of fun when I tried it at PAX Unplugged, and it’s been a hit with my friends at home, too.

The premise of Tattoo Stories is simple: one player at a time is the customer who decides what elements should be in the tattoos. Everyone else has to draw a tattoo concept using those words or phrases, and then argue for why their artistic vision is the best. Then the next player becomes the customer and you do it again. That’s the entire gameplay loop, and it’s a blast. It's enough of a party game to be approachable, while also differentiating itself from others already out there.

I know as much about drawing and art supplies as the average sea cucumber does, but the first thing my friends noticed was that the dry-erase boards included in Tattoo Stories are pretty good quality. They’re sturdy and erase cleanly, and if there’s more to a good whiteboard than that, I couldn’t tell you what. The markers, though a bit small for my liking, also work well. If you’ve got Shrek fingers you might prefer full sized dry-erase markers, but otherwise I have no complaints on the quality of the contents.

Aside from the tiny two-page instruction manual, the only other thing that comes with the game is a box of cards. Each card has a word or short phrase on it; it could be anything from “guitar” to “historically significant quote” to “epic beard.” Like the whiteboards, the cards are sturdy and just feel good in your hand - though, like the markers, they’re pretty small. That hardly matters though, since all you need to do is choose your favorites and lay them out for the other players to see.

I’ve already told you most of the rules of the game, but here’s how it’s actually played. Each player gets a dry-erase board and a marker, and one player is chosen to be the first customer. That player draws ten cards from the box, chooses five, and puts the other five back.

The other players have three minutes to draw tattoos that somehow incorporate those five words or phrases. They may ask the customer questions during those three minutes to figure out the best tattoo for that person. What they may not do is erase anything they’ve drawn; they have to commit to what they’ve made!

When time is up the players take turns presenting their tattoos, then the customer gets to distribute points. Each card goes to the player whom the customer feels used that element the best. A single player could get all five cards, or none at all. 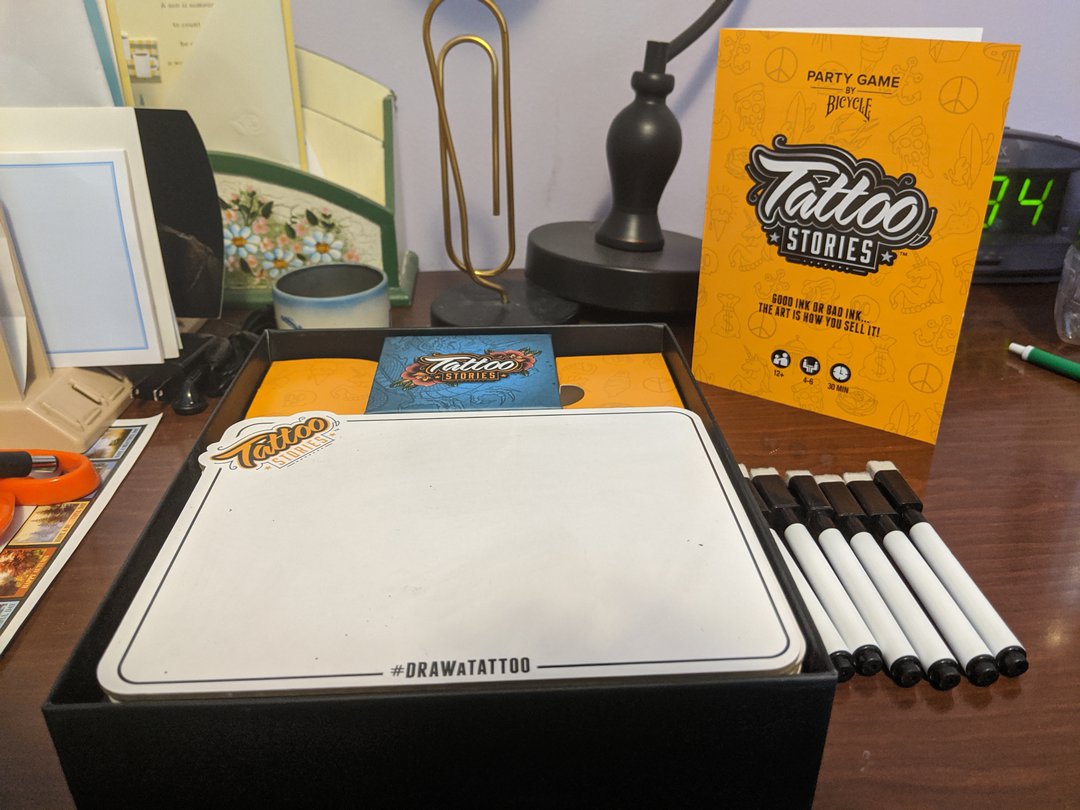 The entire contents of Tattoo Stories. It's a small but delightful game.

After giving out cards, the next person becomes the customer. Play continues until each player has been the customer twice, and then whoever has the most cards wins - or, at least, those are the official rules. Much like any party game, Tattoo Stories can (and probably will) just go until the players decide they’ve had enough. We've often played just one full round of everyone being the customer while waiting for others to get to game night, but that didn't diminish the sheer amount of fun we had.

The fun, of course, comes from seeing what ridiculous drawings will come out and how people will try to defend them. Just try to keep a straight face when you hear, “Pizza, penguin, bikini, monster truck, Mexican food. Go!” Don’t worry about your artistic skills; in my experience, the worse you are at drawing, the more fun Tattoo Stories becomes. 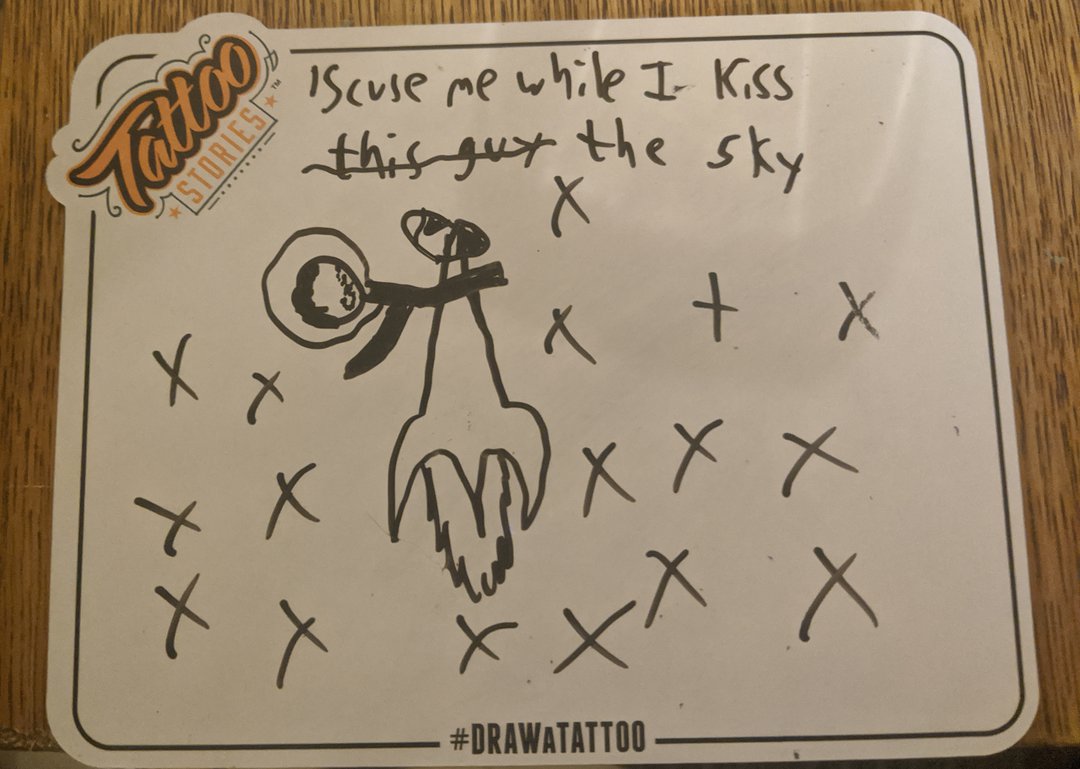 This one included astronaut, song lyrics, and cyborg (so I stuck DC Cyborg's head on the rocket). Trust me, you don't need artistic skill to have fun here.

Finally, if you’re worried about replayability, don’t be. With 220 cards in the box and five cards used each round, there are roughly five hundred billion possible combinations (that’s not an exaggeration, I did the math). You won’t be running out of options anytime soon.

If there’s one major downside to Tattoo Stories as a party game, it’s that the box only comes with six boards and markers. That means that, unlike Cards Against Humanity and similar games, there’s a hard cap on how many people can play at once. You could always go buy more dry-erase supplies, but adding more players would make each round take longer and make it harder for each player to get points. With just what comes in the box you’re limited to seven players - the box claims six, but the customer doesn’t need to draw a tattoo.

A Game For Everyone

Tattoo Stories is fun for anyone who’s old enough to hold a marker. Kids will love the chance to think creatively and draw pictures, while adults will enjoy seeing what ridiculous combinations (and justifications) they can come up with. And, if your friend group is more of the Cards Against Humanity type, just remember that there’s nothing saying that you can’t make your drawings as offensive as possible - you’re just not required to.

With a price tag of just twenty bucks, Tattoo Stories is well worth it for anyone who needs a new type of party game, or something new to play with their kids.