Fueling your Ship with Human Souls for Fun and Profit 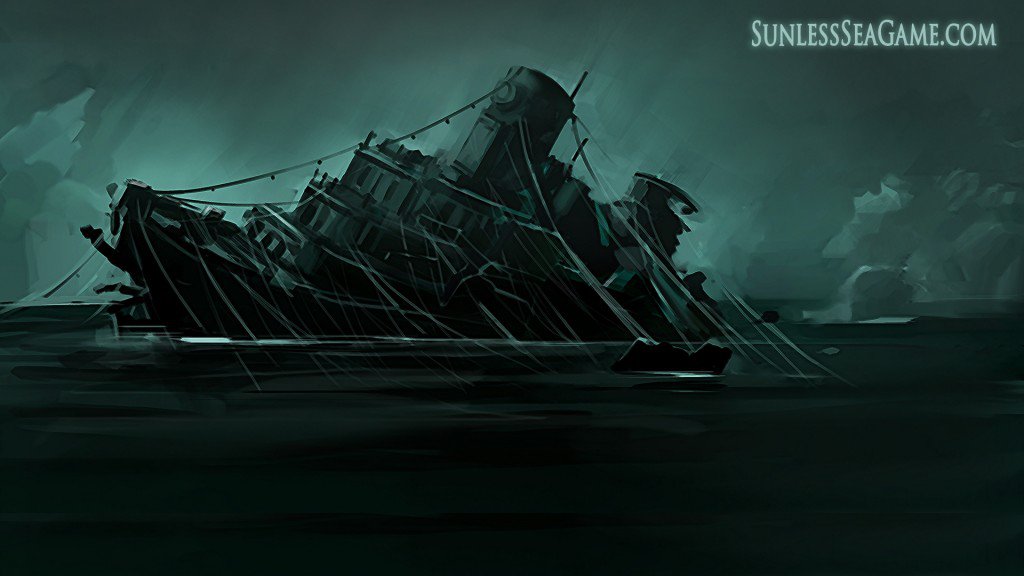 As a frugal dude, I like to maximize the amount of fun and game time I get out of any individual title. Pragmatism demands that I measure fun as the quotient of hours played over money spent. When a game claims to have 10 hours of game-play with a sixty dollar price tag, I'll usually give it a miss.

Darkness claws at the weakling crevasses of the human heart, growing like a terrible, iridescent bloom.

"Now Dana," you may say, "You're acting pretty elitist if you're ignoring the multiplayer aspects of popular short-campaign games such as the Call of Duty series and-"

"Shut up! I don't like those games! You're ruining my self-indulgent wankery!" I screech.

...My point is that when it comes to single-player games, I really appreciate replayability. I've logged hundreds of hours in games like Civilization 5, but the real king of randomly generated goodness is the Roguelike. Rogue was a procedurally-generated high fantasy labyrinth of death that spawned an entire subgenre of RPGs. My first was Dungeon Crawl: Stone Soup. I've greatly enjoyed modern interpretations of the genre like The Binding of Isaac and Risk of Rain.

Recently I picked up Sunless Sea, one of the latest explorations into procedurally generated gameplay. Holy crap, let me tell you about this one. I knew that I was going to be hooked after I sold my soul to a wistful deviless on the side of volcano, then ran out of food and fuel on the way back to Fallen London and had to eat some of my crew and sacrifice some more to the dark gods of the Unterzee for fuel.

It hits so many of the right notes for me: A delightful mashup of pulpy 1880s and 1890s atrocities, Heart of Darkness, Lovecraft, with aromatic hints of Moby Dick and maybe a dash of Drugwars on our TI-83s. Sunless Sea is based off of the world of Fallen London, a browser game that is apparently pretty great (although I've never played it). There's no saving the world, because the world can't be saved; London has fallen into the abyss, Hell's civil war is over, and everyone is struggling to survive. The fathomless Unterzee stretches from wall to wall of the cavernous void that London has descended to.

I was captured by the flavor of this game right off. Every single interaction is both totally bizarre and oddly understandable. It's a brutal world where tiny, unimportant humans toil and grind themselves to death on the sharp obsidian rocks of an uncaring universe, but little flickers of hope and joy shine through like the false stars of the Unterzee. There's no central narrative, unless you choose to uncover the details of your father's missing past. It's all about the writing in this game, and enjoying the mix of bizarre weirdness and creeping doom that hides between every word.

Each island has its own story and choices to be made with repercussions that ripple out through the rest of your gameplay. Some of them are just straight up funny. Being the deciding factor in an anthropomorphic steampunk rat versus anthropomorphic Roman Centurion guinea pig race war is surreal and absurd. Or what about discovering the dark Cyclopean secrets that draw all of the postmen from London to the Dead Letter Processing center on the tiny island of Nuncio? It's nonsense and you can only choose to laugh or cry. 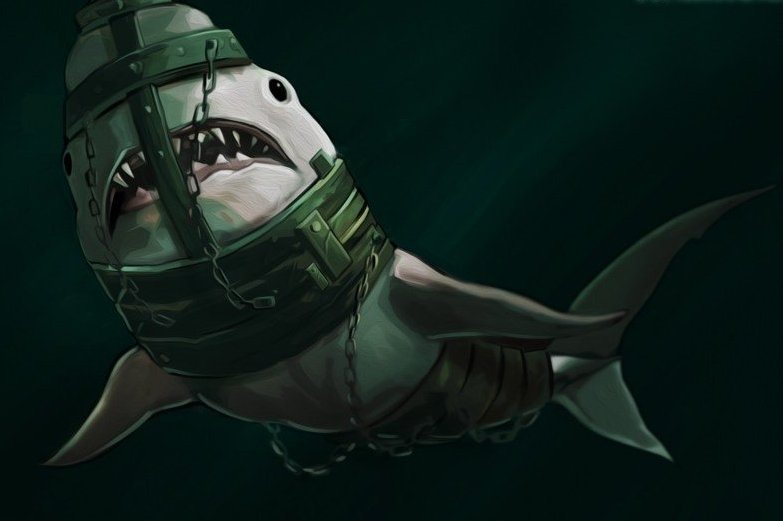 Mystery hangs like a palpable fog over the iron deck of your ship, clouding your eyes.Who would bind a shark? Who even does that?

Not everything is all doom and gloom in Sunless Sea, it's just 96% doom and gloom by volume. Failbetter Games has courteously added in a few romantic subplots, allowing you to engage in a secret affair with your ship's officers or a lover from London, with no restrictions or gender barriers. Mechanically they allow you to reduce terror, but the treatment of sex and romance is touching and kind to the fragile nature of the human heart.

Mechanically, this game starts turning the screws immediately. They allow you to choose one of three different victory conditions, supplies you with a rusty tugboat and a shoddy gun, then points you into the black ocean with a quick pat on the head. Death is inevitable. Like all good roguelikes you must learn and adapt strategies in order to reach that most noble and sincere of goals: Retirement. Without careful inventory management, balancing money, supplies, your crew's terror and the integrity of your hull, your poor captain will end in gentle sleep at the bottom of the inky Unterzee. 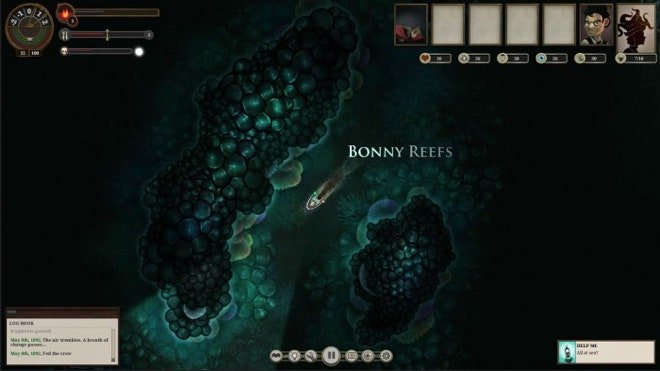 Sunless Sea focuses on narrative. Each line could have been ripped from Herman Melville's fever dreams. 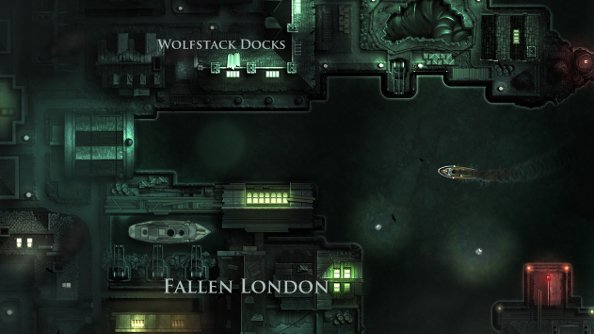 There's loads of interactions and random events, and your choices can change the outcomes to result in nice things happening or terrible, roiling failures. Every port offers new stories, and things can radically alter your plans when you're out on the deep zee. Stat growth is a function of telling your officers secrets, and the stats affect combat and narrative choice success chance. While combat does feel a little slow and clunky it adds to the atmosphere without detracting from the game-play. You're piloting a steam powered rust bucket, not an advanced warship, and it shows. Naval combat still manages to be tense as you watch your aim-finder tick towards a lock-on, praying to the gods of Stone, Salt, and Storms that you can limp away from this one. It has randomized island locations so each venture is always into the unknown, and good trading routes will never carry over between playthroughs.

This is not your typical twitch-fest of fingers that you often expect from a procedurally-generated game. Instead, the tension is built into making terrible choices and hoping they don't back-fire, like in X-Com or Darkest Dungeon. It works, and it's addictive, making you want to try and try again. The visual of your vessel exploring the dark waters of Underzee will give you a constant burst of hope towards finding something new and exciting...while often just depositing you into more and more terrible situations instead.

Always good to make it back to port... even if you know more bad things might be waiting for you there.

Sunless Sea can dash all of your efforts upon the rocks, but when a game is this well written, you'll find yourself coming back for more.

After sinking hours into this game I can say that I still haven't scratched the surface. As a matter of fact, as soon as I'm done writing this I'm going to go play some more. If you want to talk to me about cosmic horror, tweet @DKjolner. If you want to keep our server from devouring its own young to live, consider donating to our Patreon, or maybe just follow our Facebook page to keep up on all of our articles.