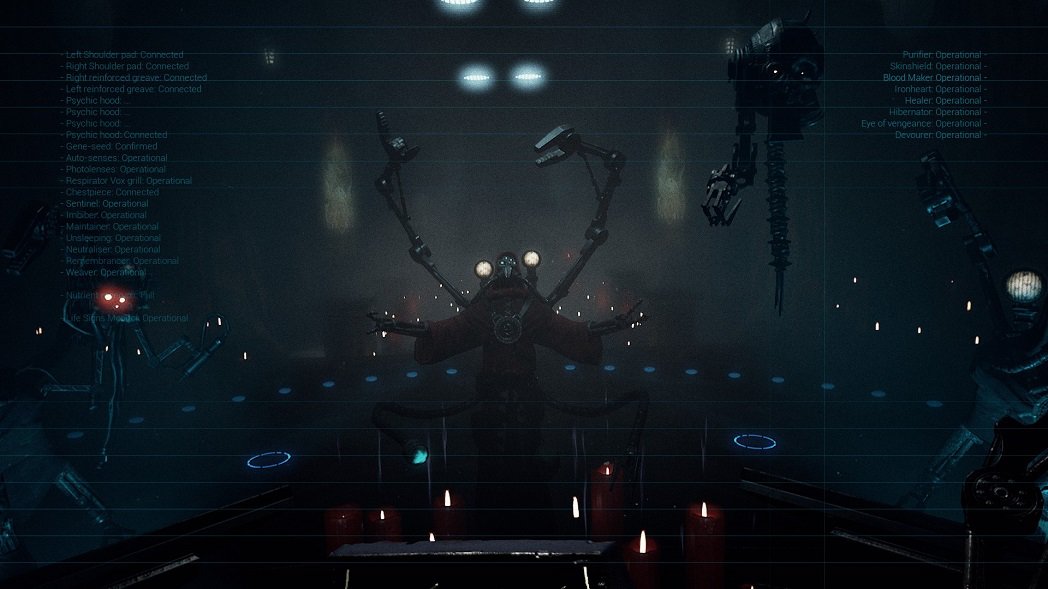 Trudging through the bowels of a 10,000 year old interstellar ship, three men clad in massive suits of armor wielding equally massive weapons slaughtered wave upon wave of monstrosities. They handled their enemies with righteous fury and without hesitation. They were Deathwings, and their mission had to be completed. For fans of Warhammer 40k, this is a story that has the feeling of a classic. For those of you who are uninitiated in this universe, we have some catching up to do.

Venturing Into An Unknown Not Meant For All

In Space Hulk: Deathwing you assume the role of the leader of this team, a librarian of the Dark Angels company of Space Marines. Your missions include exterminating the Xenos and Gene-Stealers from spaceships across the cosmos and discovering artifacts and the lost history of your great empire. However, one massive derelict ship, a Space Hulk that is slowly transforming into a Xenos hive has come into the Deathwings’ sights, and must be destroyed, to further the empire’s hunt for their past and to purify the universe. 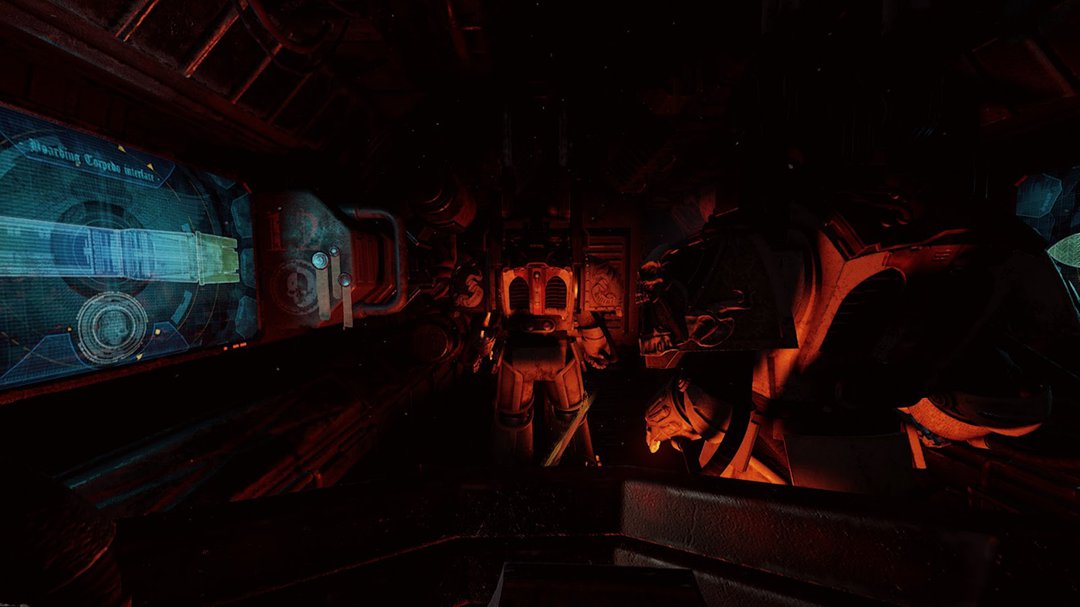 Now, if you don’t know what any of that means, you’re probably like me and haven’t explored much of the Warhammer 40K (40,000?) universe, so I’m going to put this bluntly. Unless you’re a fan of the series and know a decent amount of its lore, much of this game is going to go over your head. It’s story is quite lengthy, and dips frequently into the lore of the Warhammer cannon. There are references to important figures that I’ve missed completely, or to the Age of Heresy, which would mean much more to a fan.

That being said, if I had been a fan of the series, I would be lapping the story up. The look of the game is, even to me, exactly what I imagine the world of Warhammer would look like. Across sprawling spaceships, your squad of Deathwings mulches enemies in rooms fashioned sometimes into massive cathedrals or macabre laboratories where flesh and metal intermingle. The depiction of the world and the faithfulness of the game’s writers to its source material make the game a truly enveloping journey at times. However, if I was a fan, there would still be glaring issues that take the game back from immersing to downright frustrating.

Much Of The Same

I enjoyed setting a small scene in the opening paragraph of this review, and I believe it was necessary as this game’s atmosphere is such a grand part of its premise. But now, imagine going through that exact scene over 100 times, and after number ten it gets a little tiring. Sadly, that’s what a majority of Space Hulk: Deathwing is, much of the same. Once you play the first few missions of the game, everything becomes kind of same-y. And yes, while there are some levels that contain unique and sometimes breathtaking structures, it’s not enough to detract from the hours spent slogging through the grey-black halls of ships. 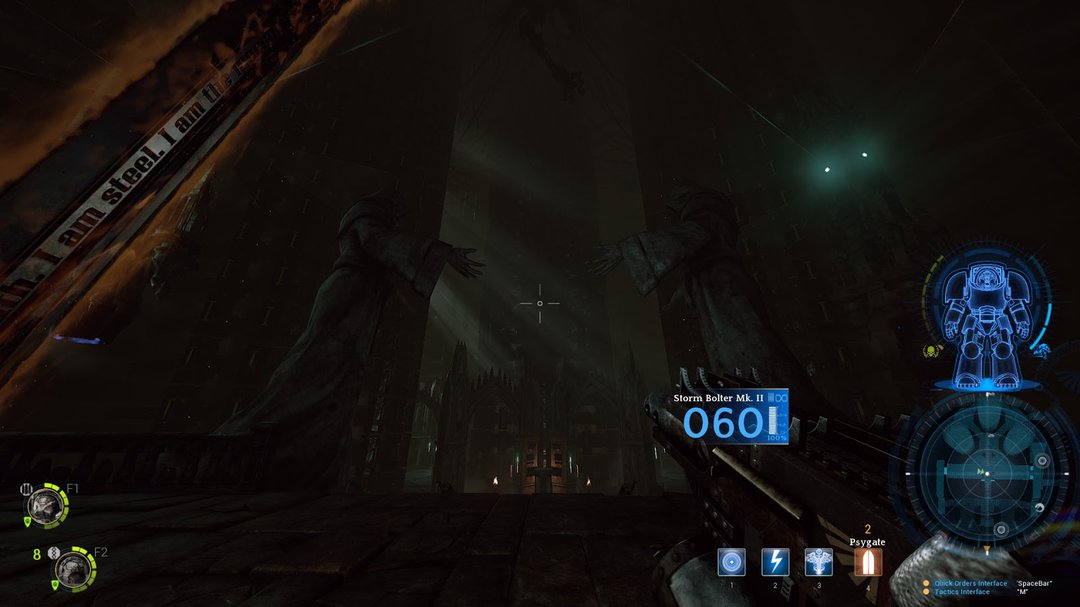 Grand setpieces try to offset the blandness of most levels.

The variation in your combat encounters is just about as great as the games level designs, more or less the same thing over and over again. As you and your party travel through missions, you’re constantly attacked by hordes of the Xenos, or ambushed by Gene-Splicers, but these fights lose their luster after the first few. Eventually, hearing an alien screech only got an annoyed sigh out of me instead of a trained gun or readied sword.

How To Purify The Space Marine Way

That being said, there are moments during these fights that instill a primal sense of joy, something that comes along with turning a group of massive aliens sprinting straight at you into compost, illuminated only by the muzzle flashes of your guns. Instances like these showcase the potential lying in the feel of Space Hulk: Deathwing’s combat, but don’t come often enough to break its endless trudge. 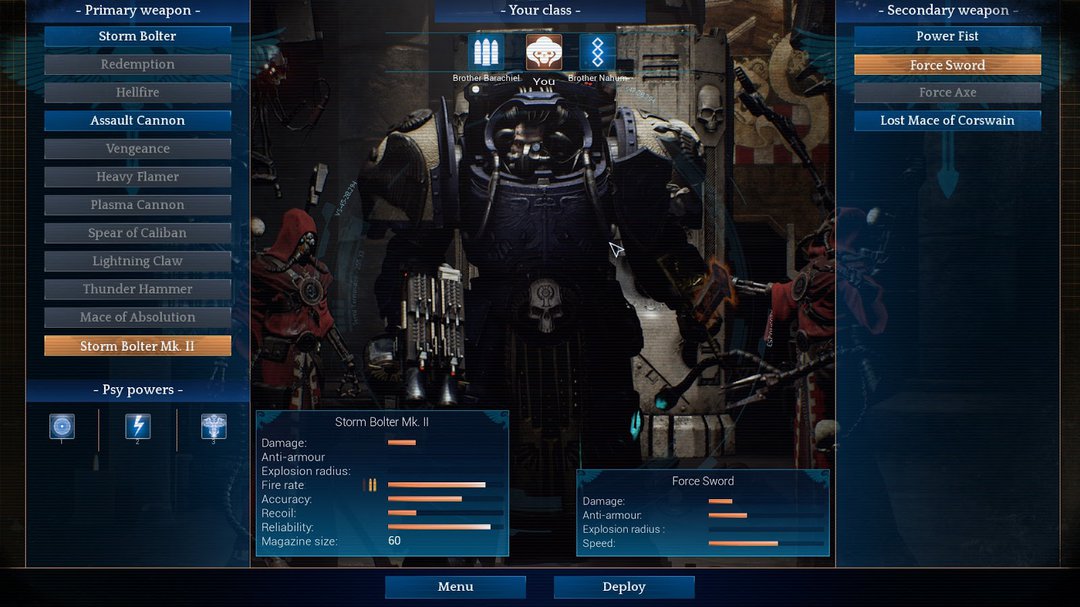 There are plenty of ways to purify the cosmos!

It’s nice enough then, that there are a decent amount of ways to decimate your enemies. There are always three ways to attack available; Psyker powers, melee attacks or with your gun. As the Librarian of your squad, you have special abilities that range from a sith-inspired chain lightning attack to the ability to teleport inside an enemy, causing them to explode. Your other attacks are rather mundane compared to the first set, though it’d be unfair to say the arsenal of guns at your disposal is tiring, you can choose from regular machine guns to plasma cannons to dispatch enemies.

Oh and you can just sprint into enemies and crush them. That’s incredible. 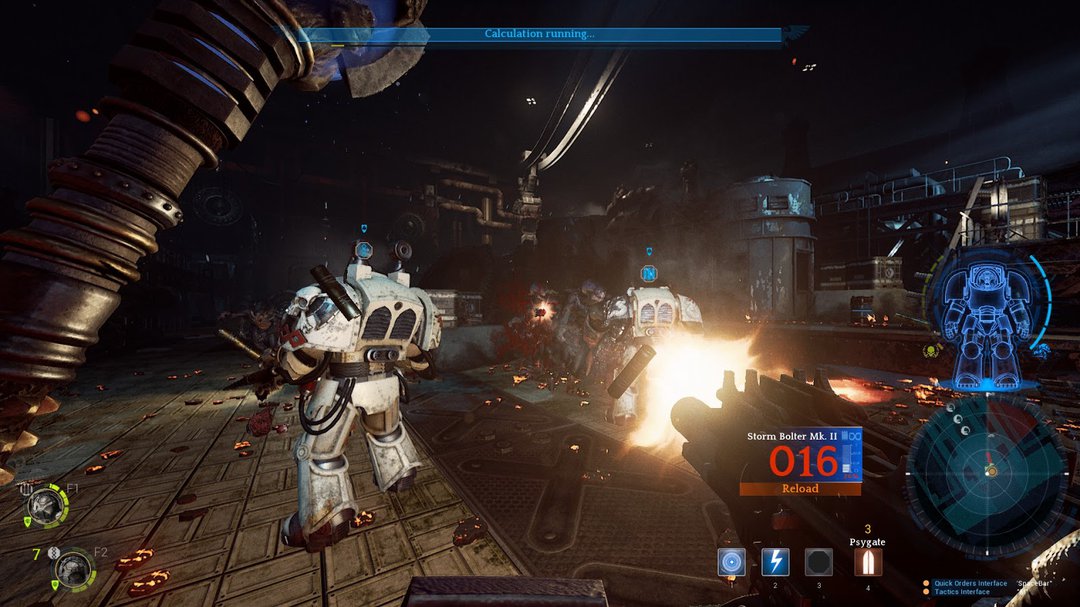 I can still hear Brother Barachiel shouting “For the Emperor!”

Clunkier Than Your Armor

Ever present during missions are two AI Space Marines, and although they look menacing enough, they hardly ever are. They can’t do much on their own besides shoot things or hit things. Beyond that, their actions in a skirmish depend completely on an unreliable radial menu that can’t be navigated quickly. I can’t count the number of times Brother Barachiel decided to turn away from a Xenos clawing at him, or gotten hit by a rocket and simply not moved, only to (you guessed it) get hit by another rocket. While it may not seem like a huge deal, these AI’s are necessary to get through the game’s half-hour or more long missions. 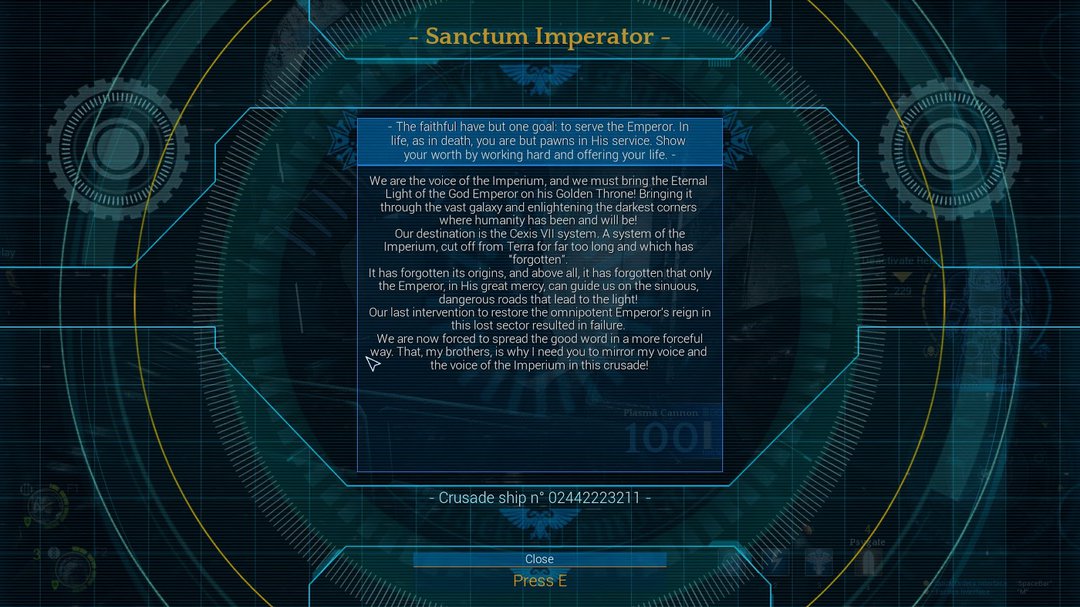 Checkpoints can also happen during important story events or at random information screens like this.

The gameplay of Space Hulk: Deathwing carries the same kind of clunky feeling as operating the menus for your AI teammates with different mechanics that seem to only have been implemented to slow the player down. Weapon switching is only allowed in your team’s ship, which you can only get to before missions on by activating a Psygate. Without being able to swap weapons on the fly, and because you only have 3 Psygate uses to start each mission, it’s easy to find yourself stuck with a bad weapon. It’s a bad situation only made worse because checkpoints can be easily missed, so it’s safe to say that I was sent back to the beginning of levels quite often.

Space Hulk: Deathwing is a work of passion, made by some true fans of the Warhammer 40K universe that poured all of their knowledge of the series into the look, sound and story of the game. There’s no other way that I could imagine a game in this series to be designed artistically. However, only other fans of the games would be able to pick up and appreciate the subtle details and nods to its large canon. For anyone else, they would go unacknowledged or be misinterpreted.

Past those facets, the game at large tends to be more of a chore. Repetitive missions, locations and enemies plague the game from the first mission and persist throughout. And while I would have liked to continue having moments of pure glee or awe, from intense firefights or stunning setpieces, they were too few to make a difference.

Where the game succeeds is in immersing its player, making them feel like a Deathwing, plowing through enemies. So if you’re a fan of the Warhammer 40K universe, or you just like to feel like a tank, Space Hulk: Deathwing may be for you.