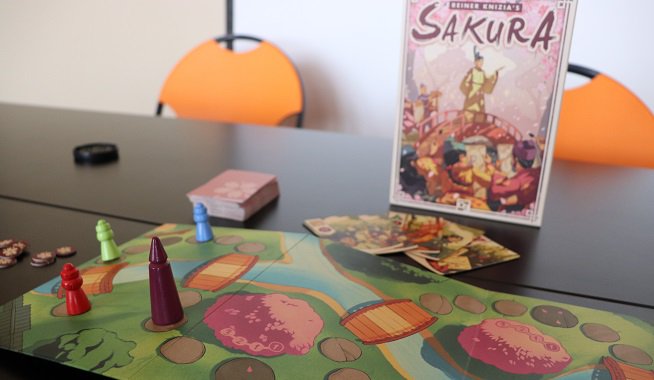 We all know celebrity culture is – to put it nicely – interesting. But what if we changed the context to, say, feudal Japan? Would it suddenly be charming, even fun to make a board game around? That’s the question that Sakura by Osprey Games tries to answer in their brand new game.

After spending the last year playing games that had such dramatic goals as conquer your foes, creating a galaxy of life, or building a trade empire… can a game all about painting royalty hold up?

The Premise: What Would You Do For Your Art?

Sakura is a game that looks very regal on its box cover, but the art on the cards betrays how silly the game really is. You score honor by making sure you are the closest to the Emperor token on three different Sakura squares, marked by cherry blossoms on the board. The reason you are doing this? To be the painter who creates the best portrait of royalty, to hopefully become the court painter. Be careful however! The Emperor is known to walk back and forth, and if your artist token runs too far ahead and bumps into the Emperor, they lose honor and are pushed back, allowing your opponents to try and score. 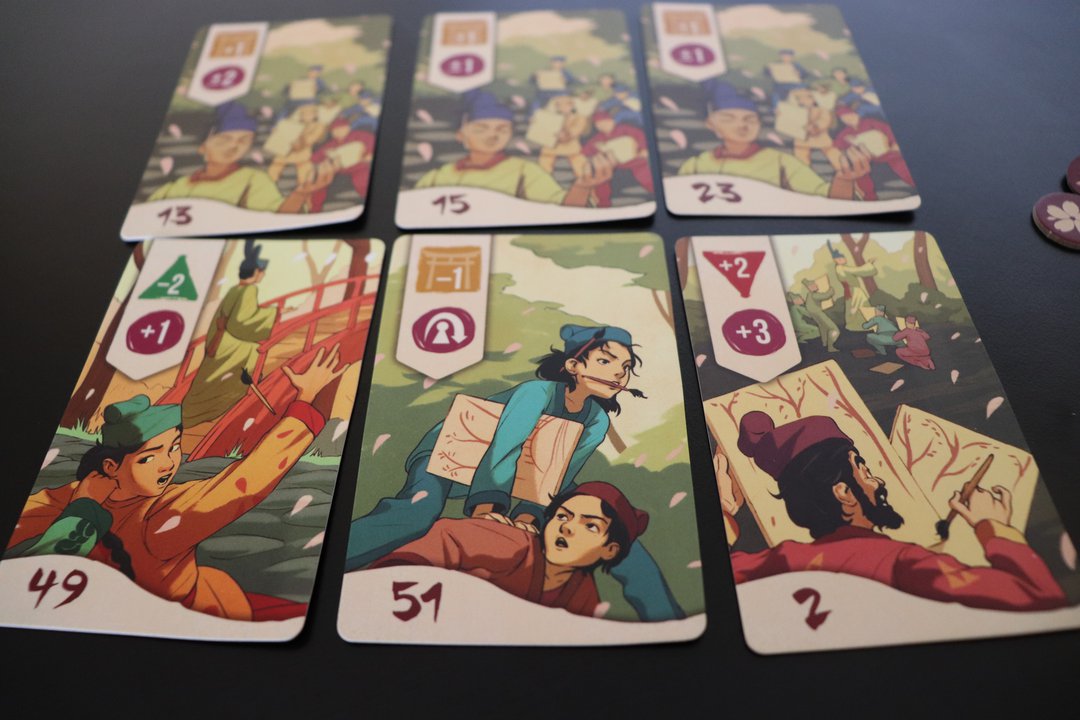 The cards in this game is where the magic is: the art is wonderful, and usually quite funny.

You would be surprised how often your characters will end up accidentally running face-first into royalty, and that’s because movement is handled: every round involves you choosing one of the cards in your hand and playing it face down. There are three numbers on each card: How the Emperor acts, how your artist acts, and what initiative order your card goes off in. For example: you might have a card that moves the Emperor forward one square, but lets you jump ahead twice. This could let you get back in first place, but one additional rule might sabatoge that: squares on the board can only be inhabited by one token at a time.

Suddenly, your attempt to jump in front actually launches you into the Emperor instead of landing just next to him. Another player had anticipated you, and used a high initiative card to walk the emperor backwards a few spaces. Now you are left apologizing profusely as you run away from royalty, while all the other artists are laughing at your misfortune.

There are only three trees that the Emperor stops at, so the game becomes a mixture of bluffing, trying to time your leap into first place, and trying to get your opponents in trouble. The board might be small, but the game becomes very frantic when the Emperor token gets close to a scoring point: will everyone play cards to try and get him to back off and run into opponents, or rush him over the scoring point?

Sakura works so well because it’s so simple. The game is compact and easy to understand once you get past the abstractions. The artwork on the cards you have in your hand is hilarious; while the box and board show a serene set of characters, the cards showcase the painters practically leaping over each other. Sakura gets to the point quickly: having fun, and causing mayhem.

Sakura is a game that is at its best when you lean into the competitiveness. Everyone revealing their cards at once creates an atmosphere of fun tension, but the silliness of the theme keeps people from taking it too seriously. The game’s short playtime means that people will want to play cards that always keep them close to the Emperor for fear of losing points… but play too aggressive, or if everyone else suddenly makes the Emperor walk backwards, you will end up accidentally tackling royalty. In my 6-10 games, this almost always resulted in someone laughing out loud, even if they were the one losing points. 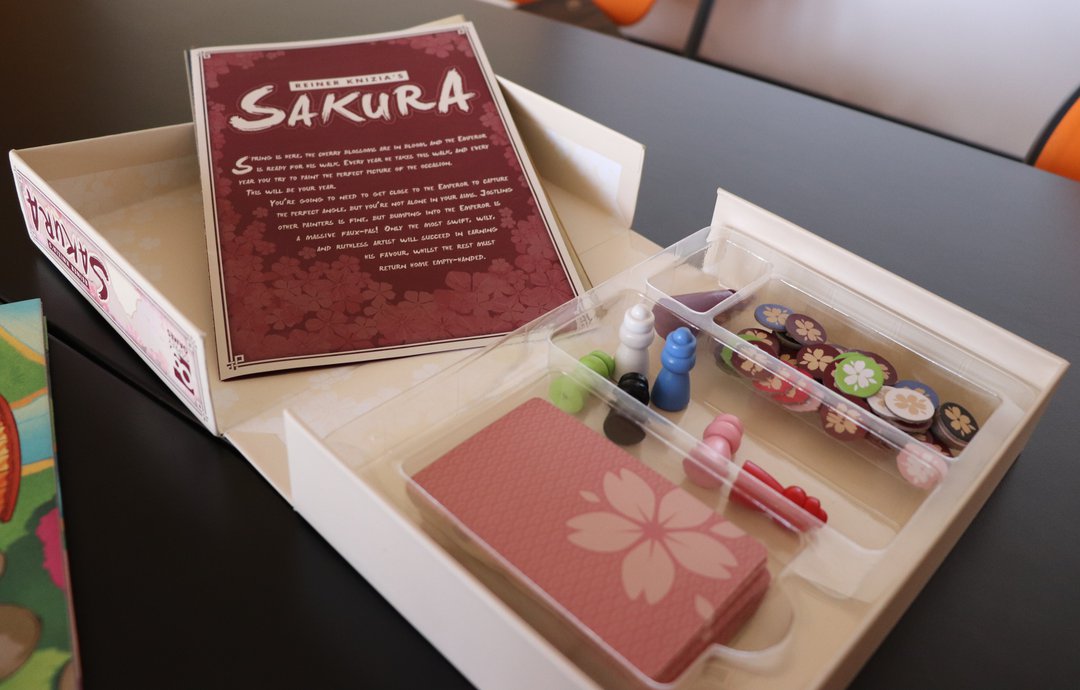 As your board game collection grows, it's amazing how much you'll come to appreciate games that are easy to put away.

There’s one last element that makes me really enjoy Sakura: the ease of set up and take down. Osprey Games has nailed a box design that I absolutely love, which is similar to opening a hardcover book. All the pieces fit in easily and snugly, and there are still enough components for you to enjoy card artwork, a miniature board, and lots of gameplay.

The Bad: A Problem For Two

Honestly, one of the only issues with the game is that the game plays oddly with two players. Like a lot of board games that are great with multiple opponents, Sakura had to come up with a way to make it playable for two people. This meant the inclusion of a neutral player which is run by the rules; the few times I attempted this mode, the extra amount of rules keeping detracted too much from what kept the game fun. Sakura is a game that is at its best when played loudly and with jovial people.

If there was any other complaint I had for the game, it is that the board – while pretty – has a hard time laying flat. Fortunately, it doesn’t detract from the actual playing of the game, because there are so few pieces, but it is worth noting for people that enjoy a pristine gaming table.

Sakura Is a Silly But Great Distraction

A combination of elements keeps Sakura in my games-to-go bag. First and foremost, this game of artistic assertiveness is a perfect size. The small book-like case keeps it neat, it’s easy to squeeze into any bag I’m bringing, and the game takes barely a minute to set up. Secondly, it’s quick to teach, while still having plenty to do. Because the complications of the game come from where other players position themselves and what they ‘bet’, it has replayability. While I can't imagine planning an entire evening around playing this game, it's a great way to warm up or cool down from a long visit with friends. 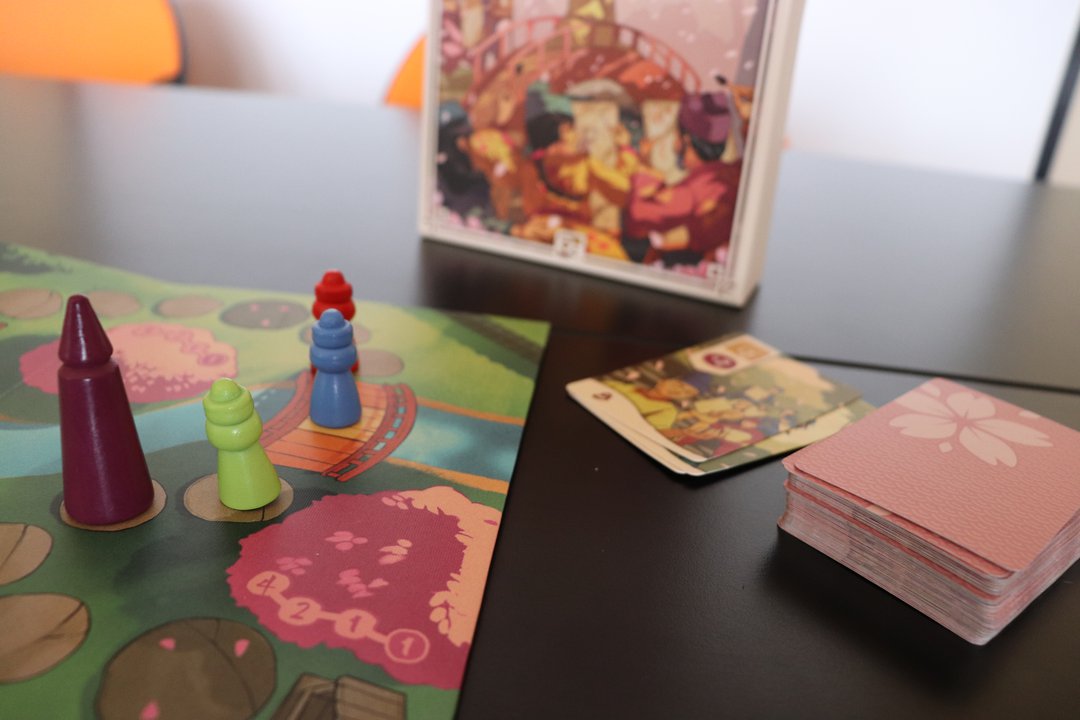 Finally, I find myself actually enjoying Sakura's theme. It's different from the larger boxes I typically carry with me. While I love huge, sprawling co-ops to learn and figure out and master as a team, I have been finding that I enjoy my competitive games to be lighter and faster. With games typically clocking in at a half hour or less, this Reiner Knizia game really does what it sets out to do in a pretty little package. No more, no less.

If you are looking for something a little different in your board games, or if you want a filler game that still has enough complexity to keep your group's attention, check out Sakura.