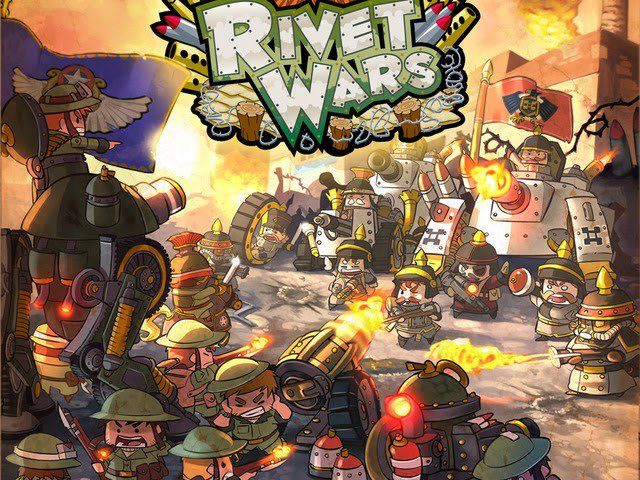 Recently, I've been in the habit of tempting poor college students into getting games they shouldn't. Its a bad, but highly entertaining hobby. A lot of it is that many have only had video games in their lives, more raised with a controller or keyboard then little plastic pieces or cards in their hands; its an odd, interesting reversal of what you might think, starting from the electronic and working down to tangible, manual games. A lot of times they believe its not as exciting, not as much mayhem available to them.

How the pieces look out of the box, on their natural playing board.

Out of all the games I have brought over to the gaming club and various dorm rooms of friends, the game I have had the most success with in drawing a crowd is Rivet Wars. You might not expect it, given the relative high cost of the game, but the laughter of people rolling artillery, the frenetic pace to get victory points, the hilarious and somehow adorable mixture of World War I asthetic with chibi-sized figurines, well, it attracts a lot of people.

As well it should: Rivet Wars is a damn good game, and quickly becoming a favorite in my collection.

Let me cut right to the chase, shall we? This game is amazing. I have had nothing but fun putting this down on the table; from either the wonderful first reactions I get from people seeing the miniatures, or their first time putting one of the larger tanks on the field and seeing the destruction it causes, the game was designed for a good time. This doesn't mean it's not cut-throat and aggressive, its just that each of the games themselves are usually fast and furious for most miniature gaming standards, so the idea of seething over one stinging loss seems silly. There is enough mayhem and chaos that you can shrug your shoulders, shake your fist muttering "Next time...next time!" and move on.

To get into the...plot, so to speak, Rivet Wars feels like a World War I that has just dragged on far, far too long, making it stretch the boundries of what you might expect from any one period-era fight, with a dash of steam-powered style weaponry. Some heroes can ride horses while another is in a giant metal suit of armor. My favorite has to be the Blightun Dragoons: gentlemanly cavalry if I have ever seen any. 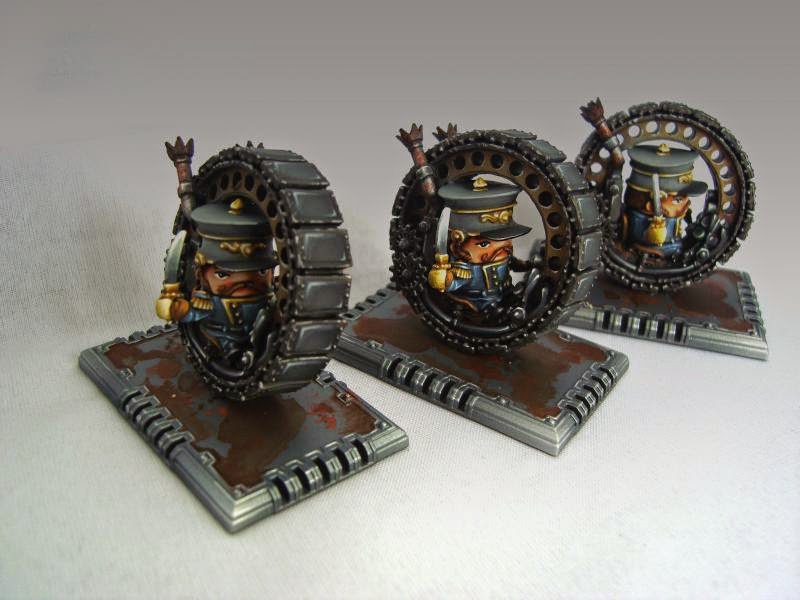 Let it be said that the game is going to be more than two factions eventually, but the starter box, Eastern Front, has two. The allies, in familiar green plastic, with the Germans Blightuns in an imposing grey (Seriously, at least eight people have come up to me when I am demoing the game stating "Oh, so you are the Germans?"). These are the most dominant factions, as per the rulebook, as they are the ones that have been fighting tooth and nail the longest, with a Mad archduke pushing the Blightun war machine forward in an attempt at empire, while the Allied states push to keep and gain natural resources. The art style, squished as it is on the miniatures style, comes across loud and clear.

The core set of Eastern Front has everything you need, and what makes the game wonderful is that there is so much to do with just what comes here. The basic way the game operates is this: Get to a set amount of victory points, usually by holding particular grids on the board with infantry, or by scoring secret missions that are drawn randomly from a deck. Its a great system, as it keeps the game having a general focus, while also keeping it from becoming the same thing every time. In addition, its wonderful that only infantry units can score: it reminds players to keep using small units rather than just rolling out with say, three mortars and a tank whenever possible. 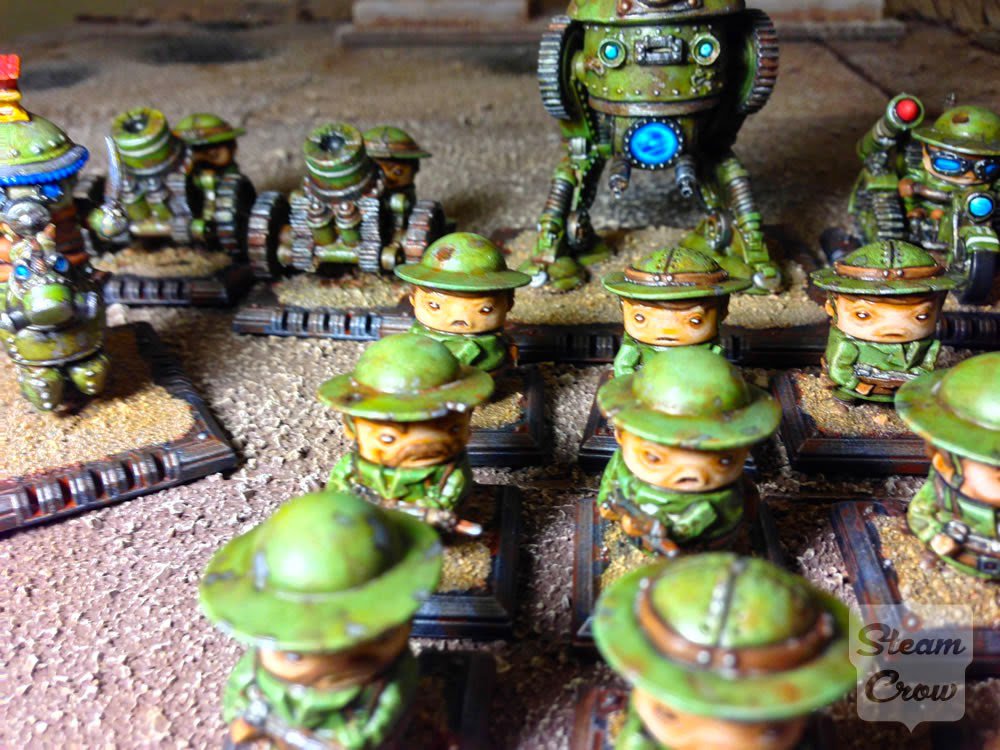 The miniatures look great on their own, but some paintjobs turn theminto works of art.

Its wonderfully fast paced - every turn, you get to call in reinforcements, a set number of points of models before throwing them down your friend's throat. You get to move and sometimes even attack as they first appear, leaving the game to pitch in huge upsets, where one turn you can be three points ahead, and then suddenly, your front line is gone, and your foes are waving their flag on top of the hills you need to take. At the same time, there is a lot of variability; there are hero units that create special effects, or heroes and turrets that are 'plugs', meaning they are not models themselves, but are slotted into high end units such as the two tanks in the base set - some give more firepower, while others just improve what you already have. As new sets for this game come out, the ability to throw plugs onto other models and swap them about looks like way too much fun.

My good friend, upon getting his own copy of Rivet Wars and rushing through his first few dozen fights, said this to me: "I'm not sure if this game is wildly broken or perfectly balanced." I couldn't help but laugh, mainly because its very true. Its also a part of its charm. I wouldn't say that I am yet an expert on the game, as I have only played full games a dozen or two times; however, the game has a knack for being able to swing wildly and quickly, as a mixture of solid dice rolling and the action cards you draw to augment your movement abilities or sometimes attacks. At the same time, the developers are gearing up for tournament style play at times, something I will be very interested in following.

To summarize? Great game, and its going to get better: one of their upcoming expansions, The Battle for Brighton, is going to cause aerial combat to soar into the battlefields. The rules are already set into the core system, but this expansion will take advantage of it in full, with biplanes and even zeppelins suddenly creating a new element to the war. Even better, some of the artwork for a new faction, the Russians Ruskas, have started to emerge. Bear riding cavalry? Please, I'll take some of that too. 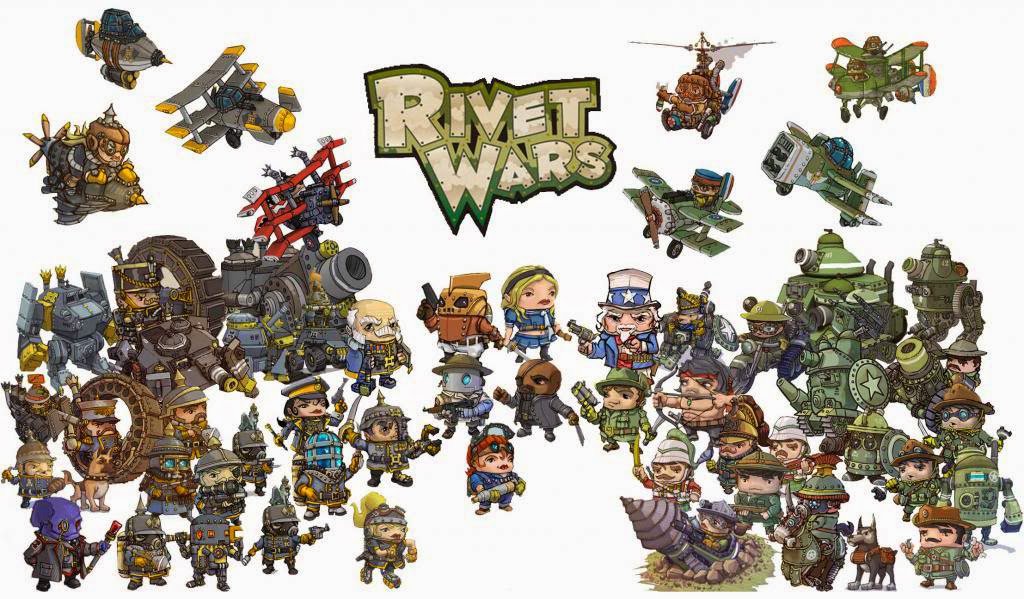 So many options... so much to look forward to.

Expect a few more articles on this game as the writers here at Sprites and Dice play it during our meetings. I am really, really excited to see where this Kickstarter gone right goes next. The price tag to buy into this game might be steep, but the quality of the game itself - and the laughter you will share with your friends - is well worth it.