When Wizards Have Hiccups

If you’ve ever wanted the feeling of arcane energies crackling around your body, laying waste to scores of foes, wrapped in a roguelike package that’s procedurally generated, Wizard of Legend by Contingent99 might be the game for you.

I say might here because I don’t think I’ve had this kind of love/hate relationship with a game I’ve reviewed anywhere in recent memory. For a game so simple in execution, my thoughts are—complicated. I’ll say up front that I think this is a good game. Whether it’s a game for you will depend on whether or not you’re able to see past several small hiccups. 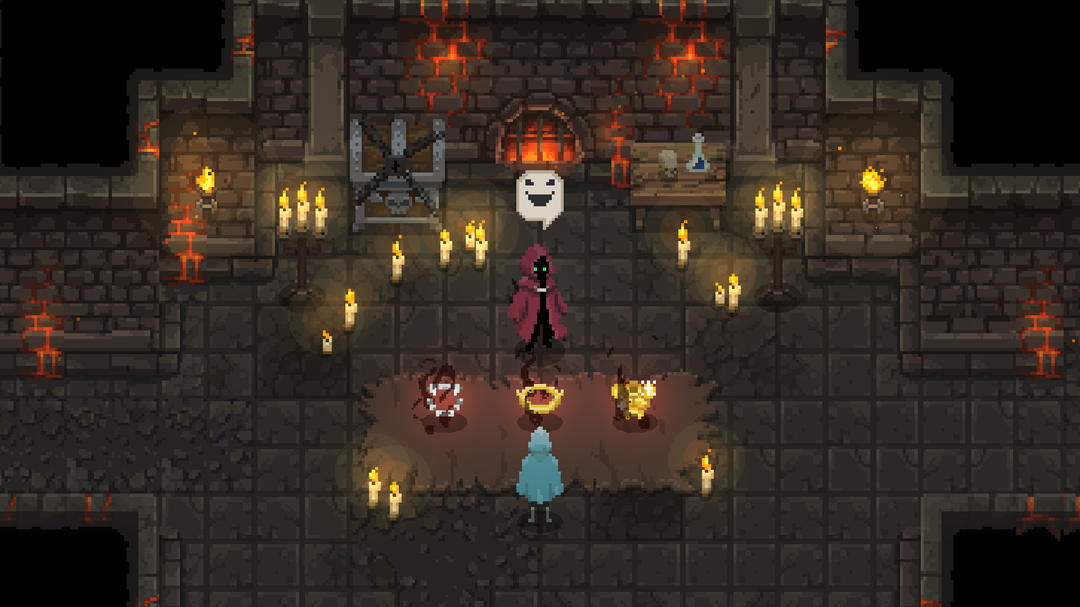 Mmm, tasty items. This merchant sells cursed ones. They're FREE but have pretty nasty penalties on them as well.

Your Own Personal Grimoire

Wizard of Legend puts you in the boots of a fantasy-world museum goer, working your way through a series of interactive exhibits about the magic that once flowed throughout the ancient world (and serves as the game’s tutorial), when an artifact in one of the exhibits breaks free and transports you to said fabled past. As you gear up for the actual Trials, you’ll have the opportunity to purchase over 100 unique spells covering five different elements, equip one relic from a catalogue of at least a hundred more choices, and then pick your favorite 4 spells as your loadout before hitting the dungeon. Beat each “world” and its boss to get to the big boss at the end of the run, do that three times, and earn your ending. At the time of writing, I haven’t beaten the game, so I can only say that, of the story, the narrative cuts out immediately after the tutorial. For what starts out with such charm, there is really no story to carry you through the gameplay. Hiccup one: despite first appearances, don’t come to this game expecting any story.

But you didn’t really come to this game for the narrative anyway, did you? Let’s be real here. You came to be a badass wizard who fries enemies with lightning, sends huge waves of earth to knock foes into pits, tosses fireballs around with the flick of a finger, and freezes enemies cold in blocks of solid ice so you can continue to pummel them at your leisure. This game delivers pretty solidly on that front, all in its visually pleasing pixel style. If the narrative is just an excuse to get you into the action, you can clearly see where all the attention making this game was spent. When you are zipping around the dungeon rooms reducing your enemies to sneezes of dust, the game feels great. It’s very satisfying when you blast through a floor of the dungeon taking next to no hits, your magical combination of powers (plus the extras you’ve acquired mid-run) doing so much work that you feel like some kind of arcane demigod. 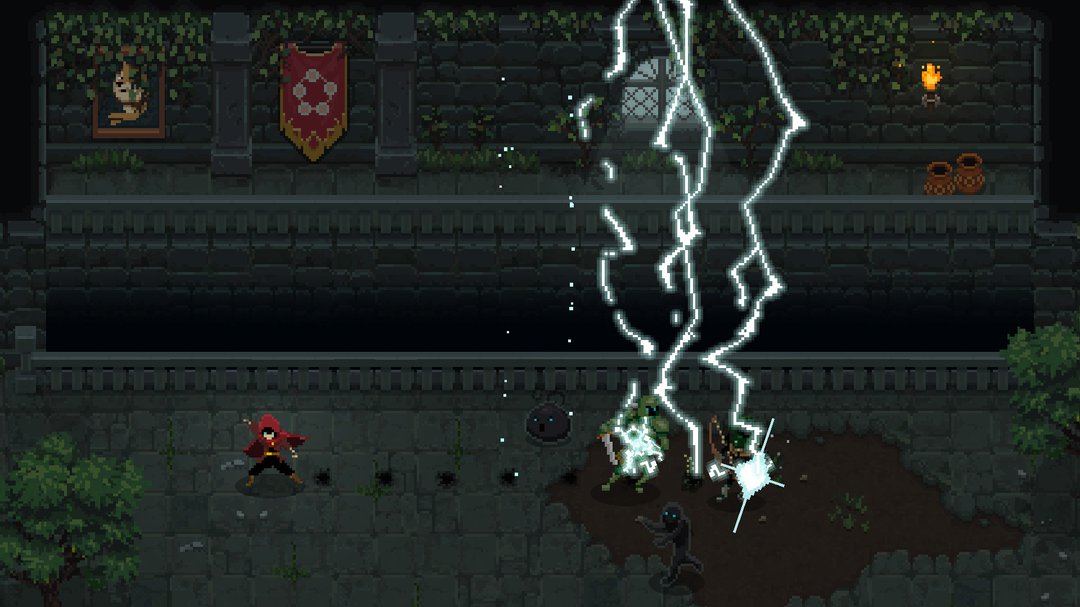 Few things are cooler than shooting lightning at your enemies while striking a smooth pose.

And yet, for every up in this game there is a down. I vacillated between loving and hating this game in equal measure at least half a dozen times in my first two days of play alone! I fell in love with the visual style of the game. I was disappointed that the procedural dungeons look exactly the same on every run (only the room positions and items for sale/mini-boss order changes); after a couple days of play, excluding the variety of spells and items you can discover and unlock, you will probably have seen 98% of everything this game has to offer. Also, I initially loved the fast-paced combat, but I disliked how I seemed to be taking too many random hits at the behest of the game’s controls rather than my own lack of skill.

And in fact, that’s hiccup number two: the controls just aren’t as tight as they should be for a game like this. Your health bar doesn’t replenish after each level, so the only time your health increases is if a health drop appears in a breakable (VERY rare without a relic that increases the odds), before a major boss fight (not a mini-boss), or if you’ve built your wizard to, say, gain health back on crit hits. If this were a game of pure skill, that wouldn’t necessarily be so bad. I like a good challenge as long as it’s a fair challenge.

I should mention that there is a merchant on every floor who sells a health potion as one of his standard offerings. In practice, however, I’ve found that I’ve taken more damage trying to locate his room on tough floors, and if I’m spending all my gold on a potion every floor, that means I’m not spending on fun new spells or other relics to combo into my build.

Sometimes, in coming back to that idea of a fair challenge though, the game’s controls get in the way. For example, while your wizard will continue to face up/down/left/right if that was the last direction inputted, letting you blast away in one direction while stationary, if you want to attack on a diagonal (some rooms are built on diagonals) the game will default you to one of the four cardinal directions if you stop moving. This will often cause you to miss unless you keep the stick tilted at a diagonal, running into your enemies. Which you may not want to do. You will take random hits when you shouldn’t. If this doesn’t really bother you, or if you’re inclined to use your dash move constantly (which can also put you IN harm’s way or into hazards in tight spaces), your mileage may vary. 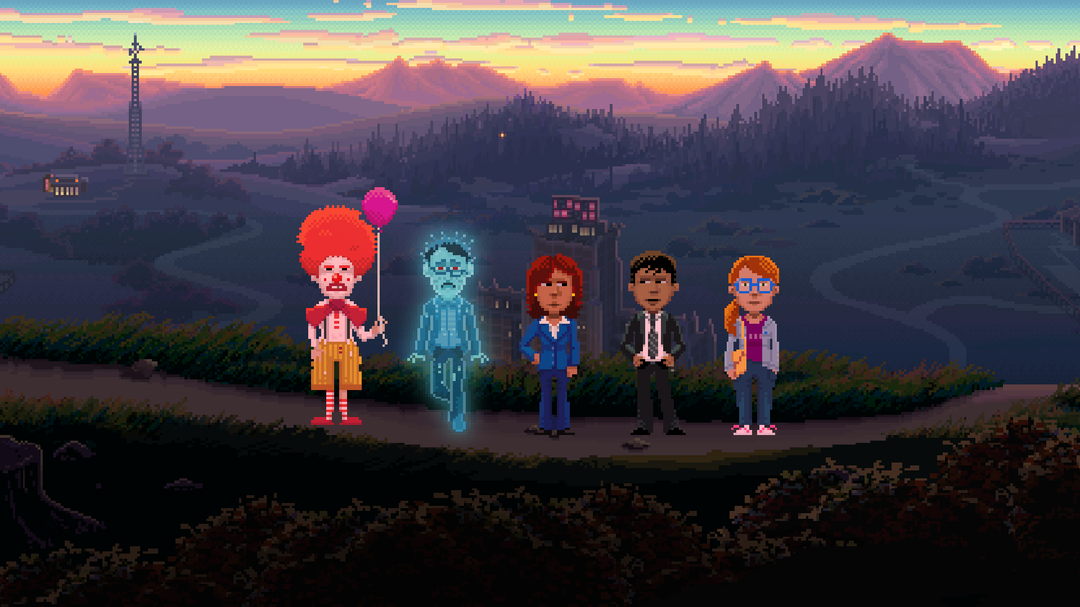 One downside to the otherwise exciting shopping sprees you can have is that there are no descriptions of what anything does prior to the sale. Wanna know what it does? You have to buy it.

Hiccup number three comes with builds; you have hundreds of items and spells to build with, but some are extremely niche and you will almost never use them. Builds are one of the most fun aspects in roguelikes, watching your combination of powers and items stack in new and interesting ways. If we come back to the occasional issue with the controls, you’re just better off never taking some spells. Sure the magnetic field that catches projectiles is cool, but against melee it’s 100% useless. Remember, you can only control the four spells in your default loadout each run. Conversely, once I found a spell that orbited ball lightning around me, I never took it off. It occasionally blocked projectile shots and pushed enemies off ledges; it also served to cover my back in those cases where the joystick controls might have gotten me hit. I don’t see why I wouldn’t take this spell on my default build every run.

Relic items aren’t much better. Remember what I said about limited health? Well those little red orbs you find that heal you don’t really give much back. So while you have dozens and dozens of relics to choose from to start your run, you’re almost certainly best off in taking something that offers healing. The box that increases the health item drop rate is okay, but I still don’t find many health items with it. I ended up favoring the heal-on-crit item combined with a cloak that gave me a higher default crit rate. Even then, the healing you receive is negligible, so you need to score a lot of hits to get a return on the damage you’ll inevitably take. I was quite sad that I didn’t have more leeway to experiment with builds in favor of simply taking a build that had the staying power to get me through all the levels and bosses. 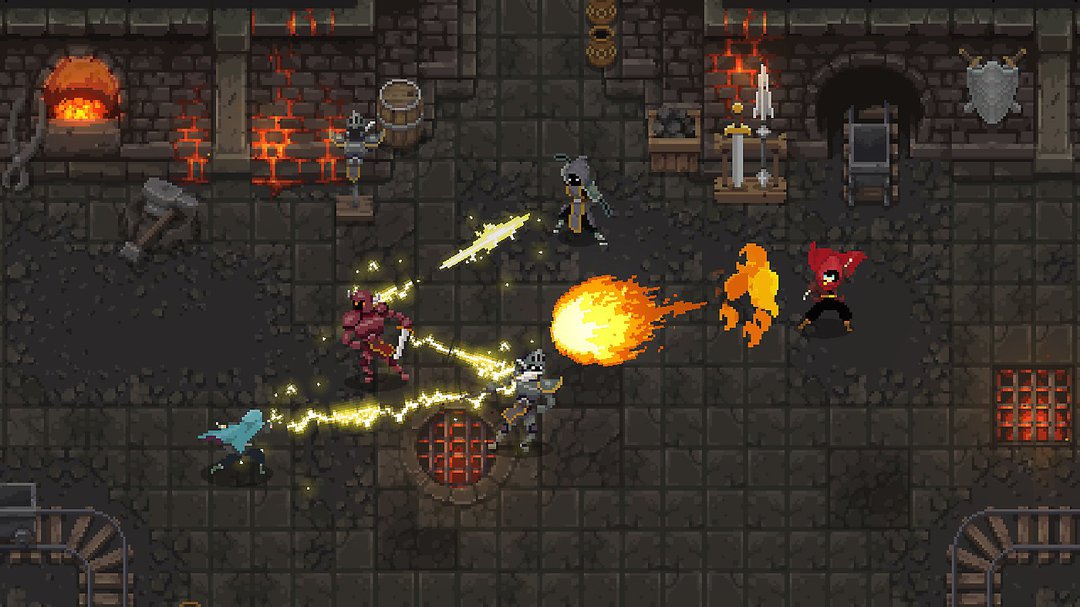 It can get a little hecktic in the 2 player game keeping track of where you are. While I like the seemless look, sometimes I wish the players had icons over their heads or something.

A Cure For Hiccups?

I’m going to take a step back here and reiterate what I said when I first started this review. This game is a good game. As many times as I’d find a new hiccup while playing, I’d also come back for “just one more run.” That’s not nothing. My biggest complaints of the game can all be traced back to the need for tighter controls. This is something the developers could easily address in a patch. I honestly think that even the scarcity of healing wouldn’t be such a bad thing if the controls would allow you to aim-at-a-standstill on diagonals. This game, and by extension its myriad of spells, is all about how you engage your foes. If you were given more options to play a distance game instead of always having to be on the move, something some of the spells “prefer,” I think the gameplay would be better for it.

I should give an honorary shout out to the two-player mode, which I had a chance to try with my brother. It’s really fun to double your firepower, and the game doesn’t seem any more difficult for adding the second player. We did experience one major bug, however, having to do with lock-in room fights, the auto-teleport that brings players together when triggering events, and getting locked outside the fight, unable to move.

If you are honestly not bothered one bit by these things, I’d say this is probably a safe purchase for you. If you enjoy a run-and-gun style of play where you’re always on the move, the directional input issue probably won’t be an issue for you. If you don’t care about punishing levels of healing, you’ll be able to better enjoy all the relic builds you can try. If you don’t mind playing one or two builds to death when you find really effective ones, then power to you. And yes, the two player bug we experienced ended our run (needed reset), but it only occurred once in the entire time we played. This game is reasonably priced if you don’t mind these things or I'm still literally describing how you like to play your roguelikes.

Keep in mind that other difficult but very well made titles like Enter the Gungeon, which are chock full of content, are the competition at this price point. For everyone else, if you’re still sitting on the fence, I’d recommend waiting for a sale. Or at least a patch on the controls.