Is It Wrong To Be This True To An Original?

Every now and then I hear a title that makes me do a double take. “It couldn’t be,” I say to myself half skeptical, but the name and theme are just too perfect to chalk up to coincidence. If you’re looking at River City Girls asking if it has anything to do with the old NES game River City Ransom, yes. Yes it does.

You wouldn’t necessarily be wrong to have no clue what I’m talking about, though. River City Ransom, released all the way back in 1989, was a hit in Japan while only ever reaching levels of “cult classic” with Western audiences. Its humor and unique gameplay for the time were popular in small circles, and I was one of the lucky few that spent hours on a friend’s NES in coop mode brawling my way across River City.

The game has had several ports across other systems and Nintendo’s virtual console in subsequent years, and now with the help of Arc System Works (another name that immediately gets my attention), there’s a modern sequel on the way! 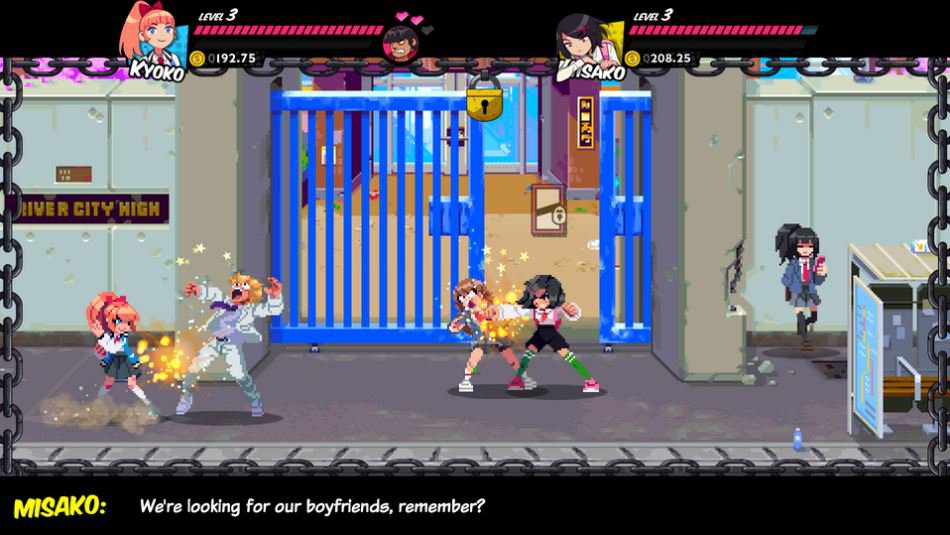 The mainstays of the series have gone missing. Time for some new faces to hit the streets, and those streets are gonna feel it in the morning!

The plot of this game is as straightforward as it ever was. Two of the most popular dudes in school have been kidnapped, and it’s up to you to punish the culprits. In an update befitting a modern audience, with the boys left powerless it’s their girlfriends who will be administering the beatdown. Misako and Kyoko are going to mash their knuckles across the jawlines of any punks who get in their way! Of course, this being River City, the place is as rough-and-tumble as it ever was. It’s the perfect setting for a side-scrolling brawler, and this aspect of the game hasn’t aged a day since the 80s.

What has been updated is the entire look of the game. Thanks to Arc System Works, River City Girls watches like a full-time anime with its own intro song and voiced cutscenes. Characters are well-acted and funny, if not a bit one dimensional, but again you’re not really here for the plot. You play a River City game to beat up a small town’s population worth of baddies. And if that’s why you’re here, this game certainly delivers. Animations are smooth, and it’s just as satisfying to string together several moves into a combo of your own, making your enemies regret ever crossing fists with you. 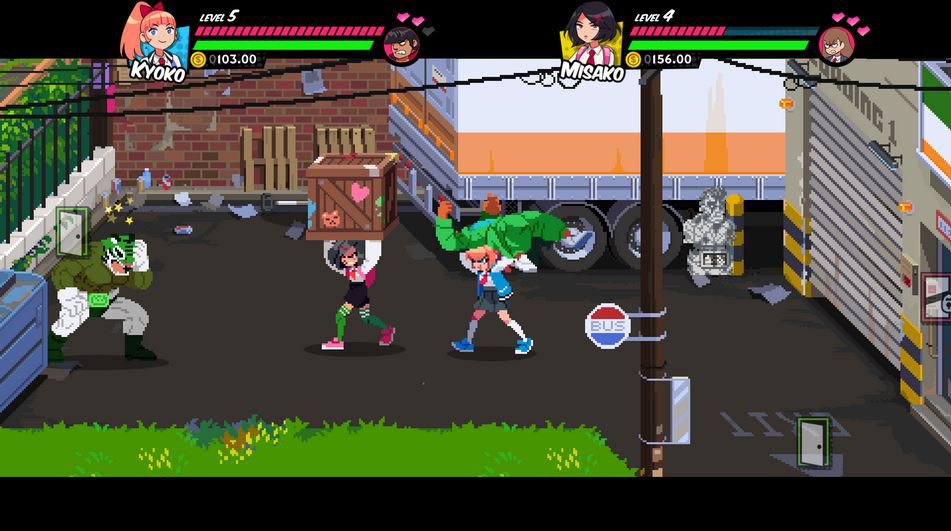 You'll find all sorts of weapons lying around, including foes that haven't gotten back up yet!

Classic Possibly To A Fault

So much of what made River City Ransom special back in the 80s remains unchanged in River City Girls, and while those mechanics aren’t really novel anymore, they are still welcome. The main carryover from its predecessor is the pseudo leveling you do in taking all the lunch money you beat out of enemies and spending it at the dojo for new fighting moves; there is still a regular level system which results in you learning new moves as well, though less frequently. This game also gives you other ways to spend your “hard earned” cash in items you can equip to further boost your stats. However, all those carryovers that make this game feel so true to the original also make it somewhat annoying.

You can play the game by mashing your basic combo, throwing in a heavy attack now and then, or you can try to time various moves to build your own combos, but for the first few hours of the game your move list won’t be big enough to do much more than basic punches/blocks/dash attacks. That’s annoying. If an enemy hits you, you’ll take the brunt of their full combo, no longer able to respond with a block or any kind of interrupt. That’s annoying. Bosses who are typically more aggressive than your standard baddie will often move toward you between combo hits, resulting in your attacks whiffing as your animations carry you past them, and allowing them to spike you in the back of your head when you should be pummeling them. That’s annoying. You'll trigger an area transition instead of attacking an enemy because both inputs are bound to the same key and you've been knocked too close to the transition. That's annoying. Sometimes thrown items can bounce off an enemy too close to you and knock you to the ground as well; honestly, I can’t understand why they kept this mechanic from the original or who thought this could possibly ever be fun. It’s annoying.

And the first time you come across a boss you can’t beat easily, forcing you to skip their multistage cutscene dialogue over and over (a button hold of about 3 seconds for each screen of their cutscene), you may just get very annoyed. I like that this game lets you continue endlessly from the last checkpoint when you die, but things like boss fights really need better checkpointing altogether. 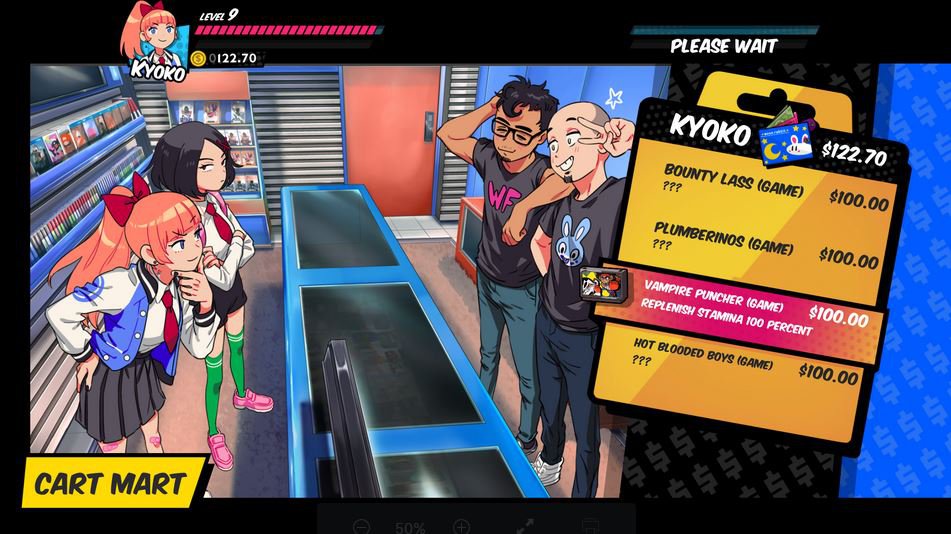 Every single shop gets its own art screen and a quick voice line for the shop owner when you enter. This game drips with gorgeous art and sound design, despite all the annoyances.

The Sum Of Its Parts

All of these little annoying points together mean my recommendation of this game will be for very specific people. The truth is, while I was hyped for the release of River City Girls since I first learned it was coming, it turned out to be a little too antiquated in gameplay for me. Much like in my review of Mage’s Initiation, this game plays for better or worse like it’s directly out of the decade it was based on. Some will see that as a plus, a solidly old school beat-em-up with a graphical makeover and excellent soundtrack that they cannot pass up. For me, on the other hand, there just aren’t enough little quality of life improvements or innovations in the combo system to hold my attention; I’ve played more recent and innovative games, and I just can’t go back in time like this anymore. I had the time of my life as I ran between enemies, comboing my heart out and picking up fallen bad guys to use as bludgeons on those still standing (yes that’s a thing you can do), but every time I got stunlocked into the game-slowing loop of eating an enemy’s combo and picking myself off the ground, it was like the fun had come to a grinding halt.

And unlike Mage’s Initiation, this game isn’t a mere $15. I can’t just say “support the developer and buy it anyway if you’re unsure.” This game will retail for a solid $30. That’s half the price of a full on triple-A game! For half a dozen (very well made) levels wrapped in charming art and sound, but ultimately a little clunky to play around. If you’re the sort who loves the anime aesthetic and drools over the prospect of a truly classic-playing beat-em-up, then I’d say you’re safe with this title. You’ll enjoy it for everything new it has to offer and you’ll revel in the gameplay. For everyone else though, I cannot recommend this game at full price. If you’re sitting on the fence after this review, I’d say it makes a solid addition to the “wait for sale” list. At $20 I’d say it’ll make a much more reasonable purchase, and in the meantime if you have a copy of River City Ransom somewhere you should go dig it up. It will still scratch that old itch even if it looks a lot more dated than its flashy, newer cousin.