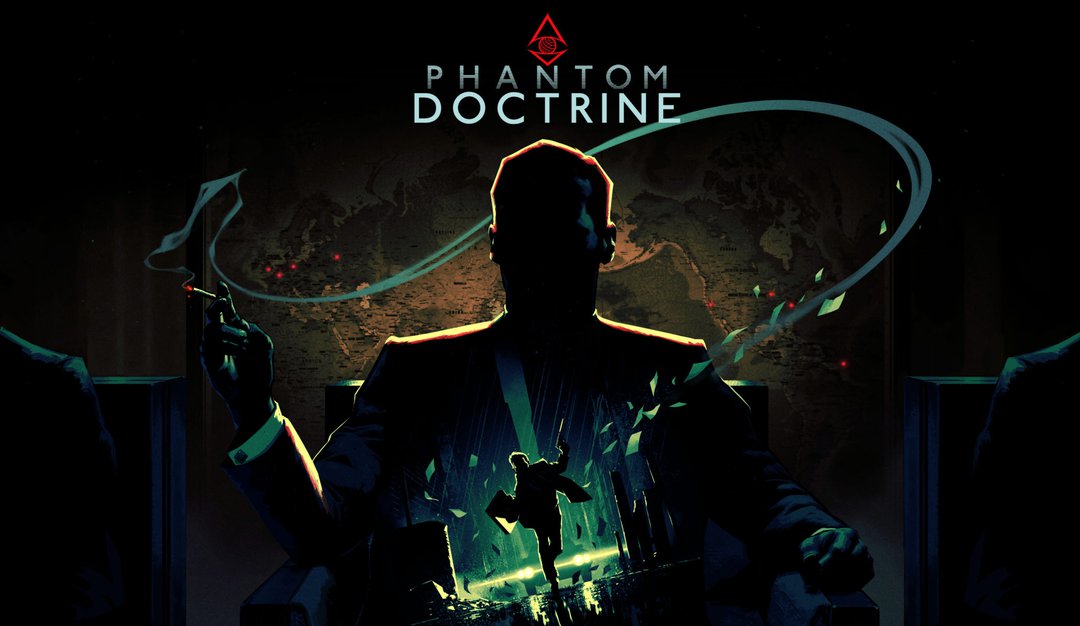 “It looks like XCOM,” several of my XCOM loving friends say as I excitedly show them Phantom Doctrine in that perhaps-overly-enthusiastic manner I have of talking about games. I'm all but grabbing them by the shoulders and yelling PLAY THIS. And certainly, this new game by CreativeForge Games, published by Good Shepherd Entertainment, has several similarities to the beloved player slayer that is the XCOM series.

But to judge Phantom Doctrine as just an XCOM clone would be dismissing everything that makes this Cold War espionage thriller unique. It has so much more to offer than just seeing how many grenades you can stuff into your agents’ cargo pockets to— look, let’s just take some deep breaths, both of us. I’ll make you a deal. Give me five minutes of your time to run you through this game, and I’ll give you an excuse to part with thirty-five dollars and change of your hard-earned cash for one of the best tactical games you’ll probably play all year. 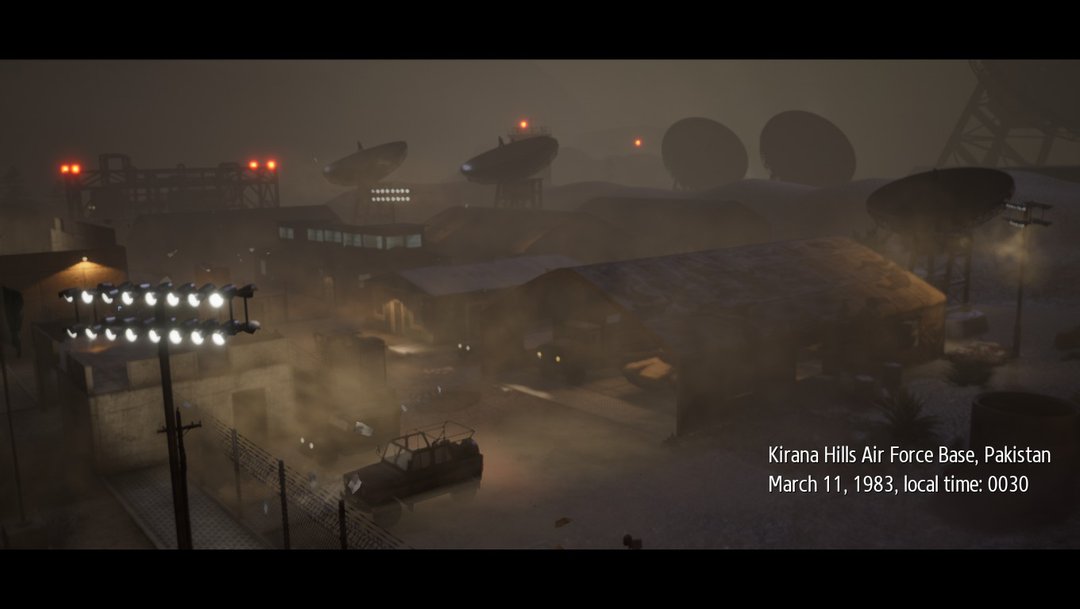 Ah, the 80s. Is there truly any better decade for a spy thriller?

I could start with any number of parallels here to paint this picture of America or Soviet Russia versus—ok I don’t exactly know who’s pulling the strings against them yet. I haven’t connected enough pushpins with red thread to figure that out. Oh, you think I’m joking. Just wait. You’ll be tacking up photos and redacted documents to corkboard soon enough yourself.

Let’s start again. This game could be like XCOM if XCOM offered you more to do than silently stalk your prey, plan out your perfect ambush, open fire, and then spend the next thirty minutes scrambling behind cover missing shot after shot until either everything in front of you is lifeless or your men and women lie in little pools of their own blood. Don’t get me wrong, that’s not a dig against XCOM; I’ve spent many tense yet contented hours in front of my XCOM2 ironman run. XCOM does combat well, and polishes it to a mirror finish. But what if you were to hypothetically build on top of that kind of system? What if you had the ability to use disguises, or walk into non-restricted areas free of alarms, or silently incapacitate enemies and hide their bodies, or accidentally put guards on alert because one of them hasn’t done his regular check-in, or call in support from off the map, or just kick in all the damn doors to a room at once as your agents breach in perfect sync, dropping every hostile within?

Phantom Doctrine is like XCOM, but with the ability to go stealth or “go loud” like the spies you are. Or go both, with some people waiting out at the van in body armor just in case things go bad for your infiltration team. Phantom Doctrine is like XCOM if XCOM didn’t mind you splitting up your characters. On one recent mission, no lie, I had one of my three agents simply take a nice stroll around the outside of a single story building, peeking through the windows as he went. Revealing the fog of war inside each room was intel more valuable than any amount of explosives, and it allowed my other two agents to quickly work through the facility, avoiding guards’ lines of sight, as if they were psychics.

In short, Phantom Doctrine is like XCOM if XCOM gave you the freedom to do all the things you wouldn’t normally do in it. 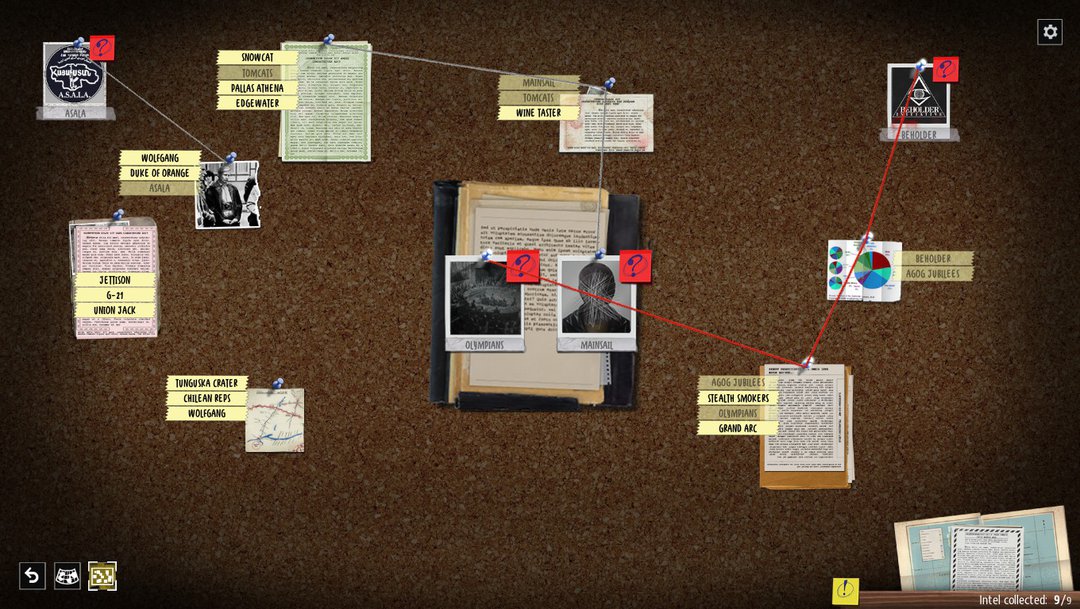 I wasn't joking about the corkboard.

Phantom Doctrine, as you might be getting the sense now, is about more than just combat. Some missions will involve shooting by their nature, though, and that aspect of the game is satisfying as ever; imagine my surprise, for example when, with two agents overwatching a doorway, ready to shoot the two guards pursuing my team, both fire at not just the first enemy to proc their cones of vision but at the second one as well, laying them both out in the space of a blink. I was shocked at the efficiency of their placement plus that particular order. This game gives you all the tools to tackle missions with a style and variety that suit you.

Perhaps your agents have their backs to the wall, desperately looking for an escape from an op gone bad. You run up against a locked door, but luckily one of your agents has picks and has it open in no time. You’re about to fling yourself across the threshold when you notice the vision cone of an enemy soldier on overwatch outside. They’re already covering the side exits! One of your other agents bounces a laser into the eyes of the guard, disrupting his overwatch as you file out and open fire first. Your team makes for the extraction zone, your pickup still two turns away. Have you timed its arrival properly? 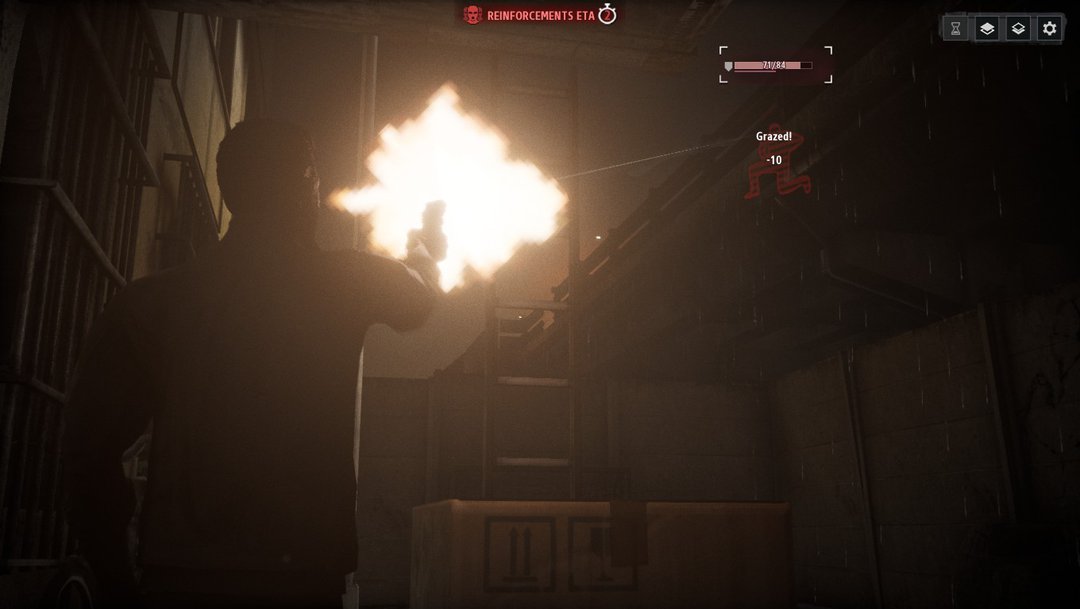 Pistols are great for quick headshots. In this case, my automatic weapon was out of ammo and I couldn't afford the turn to reload.

And of course, I’ve saved the best for last. The cherry on top of the whipped cream on top of the delicious ice cream sundae that is all this game has to offer. Remember those times in XCOM where your agent would jump through a window, heroically pointing their weapon directly into the enemy’s head, your readout stating a 95% chance of a successful attack—all for you to heroically miss? I’m sure we can both count times like that on both hands and maybe both feet! Do you miss those times? If you do maybe Phantom Doctrine really isn’t the game for you.

The random chances to hit are gone. Just let that sink in.

All agents (and enemies, though it start at zero for them while you’re infiltrating) have a stat called focus. You can spend it to activate takedowns and other special abilities, but it’s also automatically deducted when you’re shot at. If you have it, plus or minus a modifier for cover, you take less damage or dodge attacks altogether. Weapon damage is expressed, not by a chance to hit, but by a range of damage, with automatic fire and high focus skills having higher outputs. How you manage your focus is up to you. Save it for defense? Go for that risky but rewarding headshot? Blow it all and then have another team member help refill it with their own support skills? In keeping with its theme of positioning, intel, skill use, and planning, Phantom Doctrine once again delivers on its promise of letting you run your team of spies the way you want. Except here, if you fail, you have no one to blame but yourself. 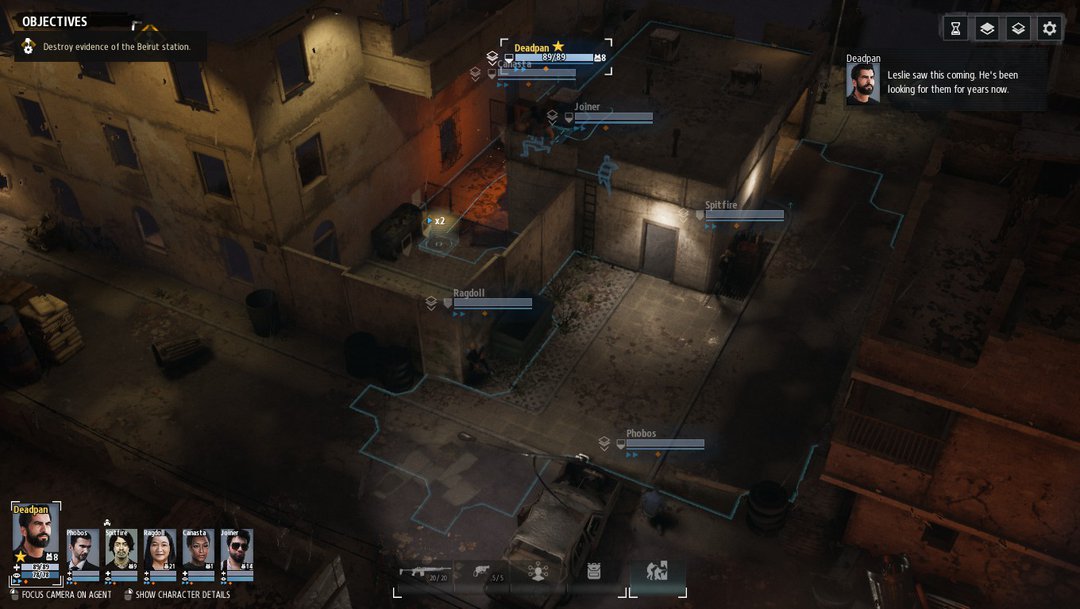 It's SO SATISFYING to fan out your team, some watching the flank from around cover while others take point approaching your objective.

Your Mission, Should You Choose To Accept It

I’m probably about up on my five minutes with you and there’s just so much more to this game that I don’t have the time to go into the nitty gritty about. Yes, it has base building. Yes, it has upgrades and weapon mods. Yes, you actually get to read redacted documents for codenames and tack them up on your wall. Yes, you do get bonuses for extracting enemy agents instead of just killing them. Yes, there is an overworld map that lets you fly your people to minor jobs between missions. Yes, you can also assign them within your base to boost tasks. Yes, you can move your secret base of operations. Yes, your agents can be captured or left behind. Yes, agent identities can become compromised, necessitating new IDs or blown cover during ops. And yes, there’s an Ironman mode for the truly masochistic.

Yes, yes, yes. This game is a slew of yesses in my book.

So who might say “no” to this game? For starters, this game is still always going to be a little bit like XCOM. So while it hosts a number of improvements over that basic formula, if you like espionage but detest turn-based, tactical games, Phantom Doctrine may still put you off. If you don’t like playing minigames and micromanaging your base operations in between missions, you will definitely have a problem with about 40% of this game; honestly, I personally like how the base management breaks up the action and lets me feel clever, like I’m actually running a group of spies. But that’s a big chunk of your downtime for some who just enjoy nonstop action. And finally, if you miss the thrill of life and death that XCOM cranks up to 11, Phantom Doctrine’s more considered and thoughtful pace (minus those bursts of gun battles) might not be for you; again, I personally enjoyed the pace of this game and tired of XCOM’s ceaseless intensity (read: stress), but I appreciate that some people thrive on that. The game costs a reasonable $36, so it’s worth taking these kinds of things into account before purchasing. 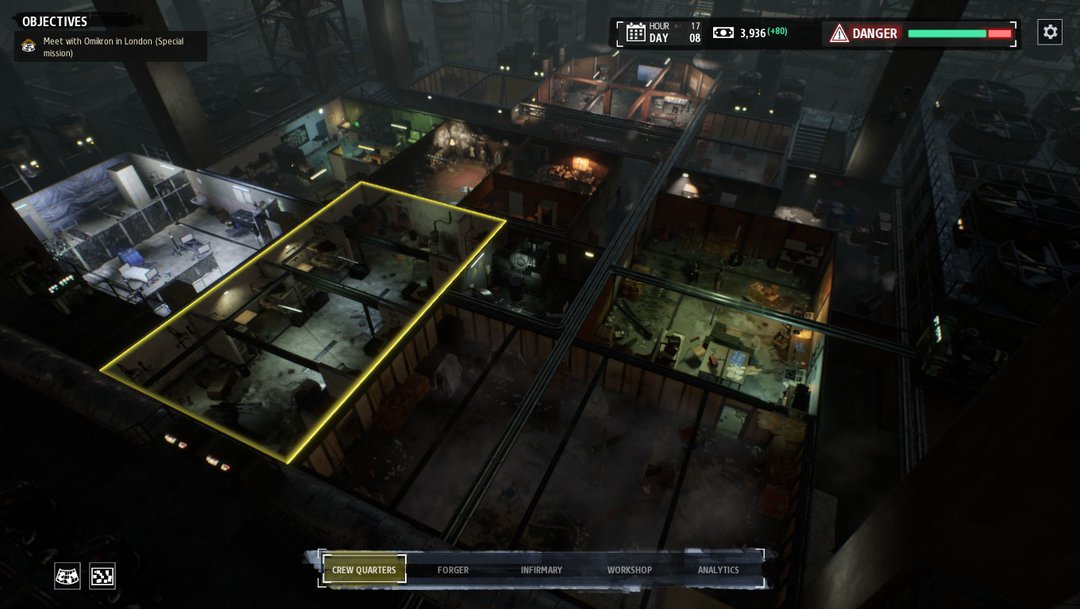 Home sweet home. At least until the danger meter fills up as depicted here and it's time to evac the heck away to a new locale.

All in all, I think that this game has been just as carefully planned in its design and execution as its operatives display through their actions in-game. A lot of clear thought and effort has gone into making this game a tactical marvel, and for those out there who can’t get enough of games “like XCOM” (of which there are still not actually a great number) I cannot recommend Phantom Doctrine highly enough. It’s not exactly XCOM3 but that’s not the point. It’s something different, something all its own. It’s unique, and I think that definitely makes it worth your time.

Now if you’ll excuse me, I’m dying to know how the plot thickens in the next chapter.