A Macabre Story With Real-Life Parallels 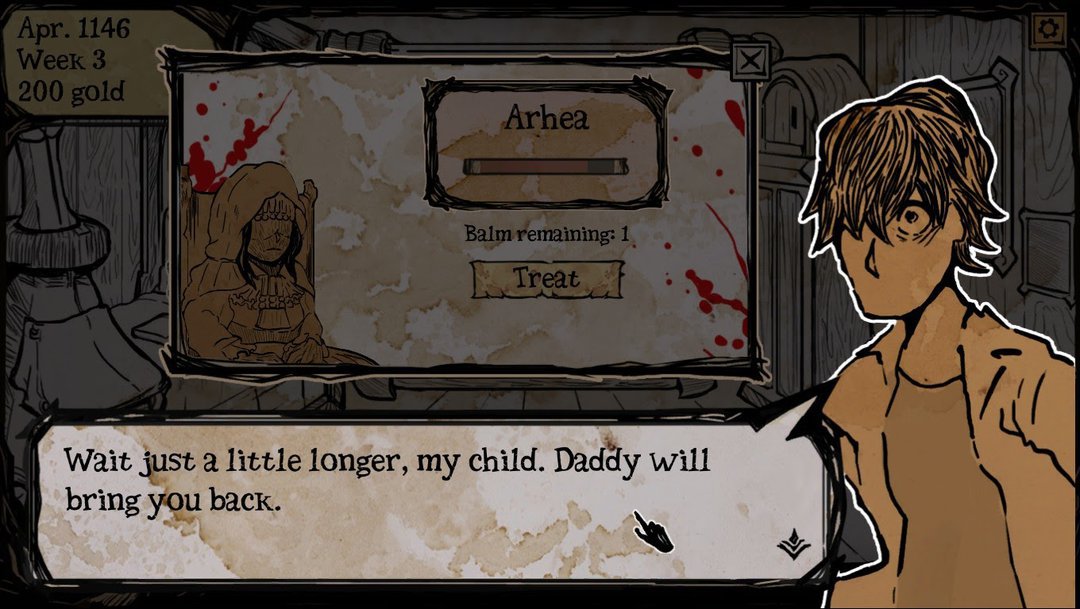 What would you do to bring back someone you loved? Would you make a deal with the devil? Make a wish upon a monkey’s paw? Or would you dabble in experiments so depraved that they would make the stomach of any sane person churn? 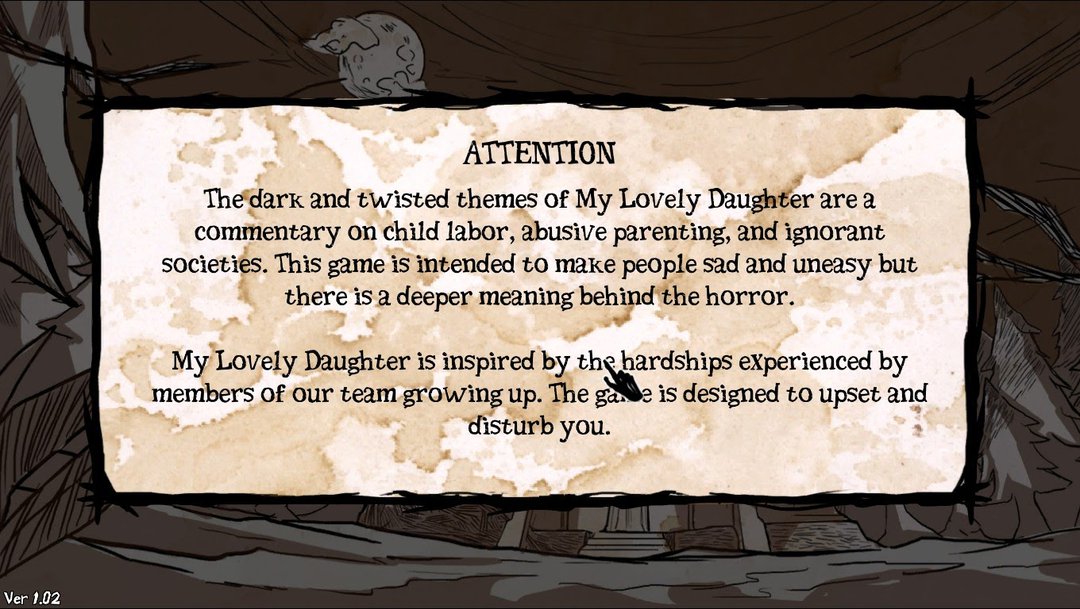 Enter at your own risk.

In My Lovely Daughter, the latter of those is the only option of Faust, an amnesiac alchemist that awakes in a dark gothic home. He finds himself surrounded by rooms that feel familiar, books that he could swear he had read, and a lone figure sitting upright on a four-poster bed, illuminated by a small fire. He finds that this figure is his daughter, now deceased, and that the fire is her soul removed. So he does what any newly-insane alchemist would do, begin creating homunculi to harvest and feed souls to his daughter’s, to wrench her back to his loving arms. 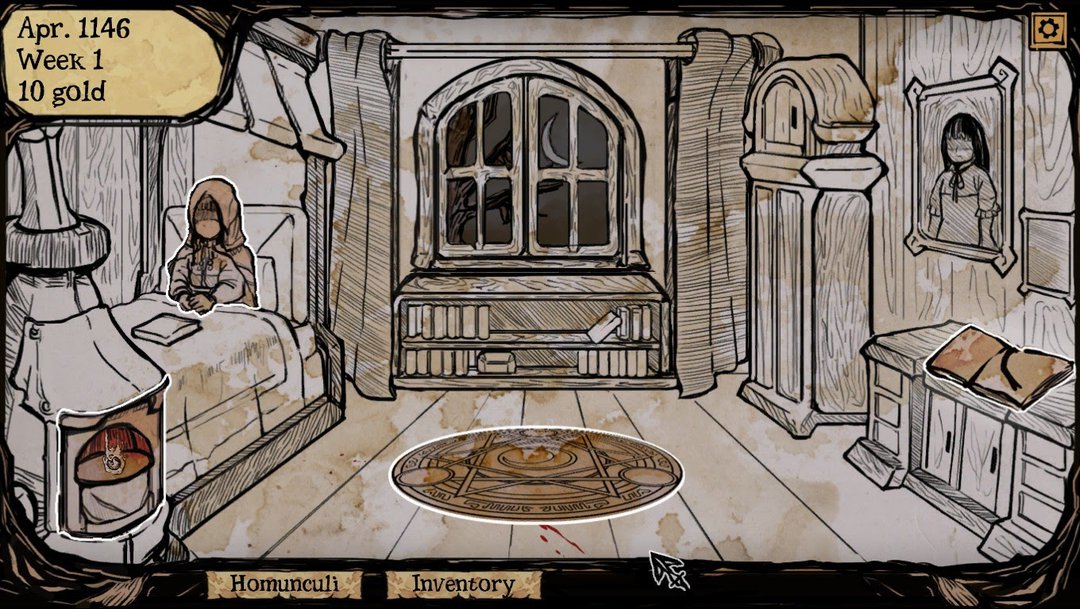 Your daughter’s room is also where you’ll be making all of your homunculi.

Anything For Daddy's Little Girl

My Lovely Daughter is a macabre trip that tells not only the story of an alchemist driven mad by the loss of his memory and his only daughter, it is a metaphor for the very real issues that children with abusive families come to face.

After creating your first homunculus using clay and a transmutation circle (ahh, my years of watching Fullmetal Alchemist finally pay off), you sacrifice her to feed your daughter’s soul. For Faust, sacrificing these creatures is an easy task. To him they are only means to his desired end. But for us these sacrifices, always of homunculi which always retain the look of a young girl and see Faust as their father, are brutal. Your first homunculus, a golem of mud given a soul, is tied up and left in the rain to be washed away, leaving only her soul and some of her residual components. 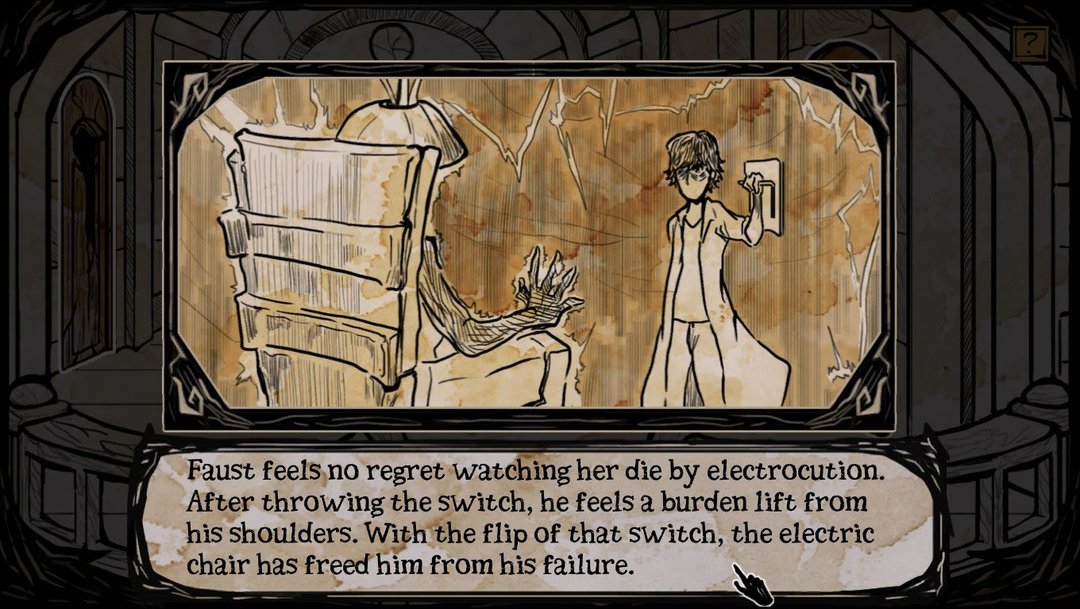 Faust’s methods of sacrifice are varied and gruesome.

Getting your daughter back won’t be that easy, however. You will need more souls to experiment on and feed to your daughter, so more homunculi need to be made. To be able to fully resurrect your daughter, you will have to balance her soul’s joy, sadness, fear, and anger, otherwise known as its attunements. These attunements are harvested from the souls of the homunculi you make, each of which has a predisposition towards one in particular. What is left unknown is how much of each attunement is needed, so you will of course need to experiment, meaning more sacrificing of your other “daughters.”

Of course, you won’t only be using clay to make your homunculi. There are five main ingredients that can be combined in different orders to create a different variant of homunculus. However, they all carry the same gothic style of the game, whether they take the shape of a child engulfed in flames or an animated porcelain doll, they are all unsettling to look at. This unsettling effect extends to the entirety of the game as well, which seems to have taken some inspiration from Darkest Dungeon. However, a roughly sketched together look lends some charm to the macabre setting. 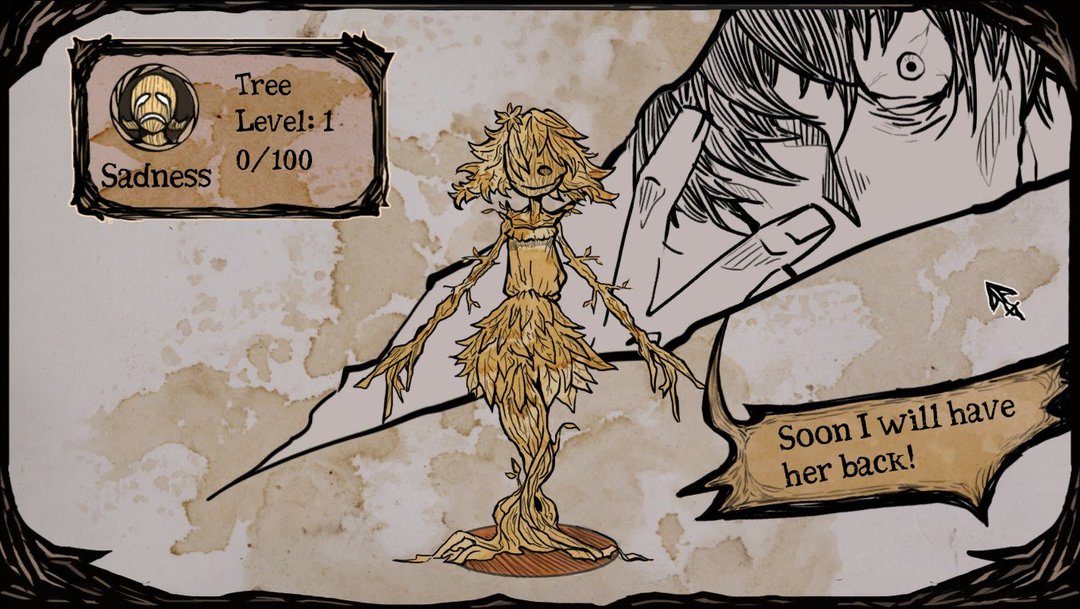 Yes, you will care for her too.

Basic ingredients for homunculi, clay, meat, and wood don’t grow on trees… Well except for that last one, but Faust isn’t a lumberjack. Luckily the people of the town that Faust awakens in remember him, and miss the work that his homunculi not-daughters used to do for them. So Faust does what any good father would do, and starts putting those “daughters” back to work. Yes, this is a game that is meant to make you uncomfortable, and that is certainly by design as you explore the ideas in this game.

It’s a stark comparison that the team at Gamechanger Studios makes to the real world: there are plently of real children that are put into their own unfortunate situations where they have to work. However, in My Lovely Daughter, the homunculi I send to work will have to be sacrificed later as a way to layer on more of that meaning into this virtual story. Sometimes playing this game, it’s hard not to feel abusive, if not downright evil. That's most certainly by design.

Visiting the town takes a week, but during that week you can assign your different homunculi to different members of the town. These villagers all have their own back stories which slowly unfold as your daughters do more work for them. You speak to them or fulfill high quality item requests that pay in large amounts of coin. Jobs have their own affinities as well, and matching a homunculi to the correct job grants a bigger experience boost to them. The higher the level of a homunculi, the higher quality ingredients they yield when they are sacrificed. However, what you’ll need to buy before any ingredients is preserving balm for the body of your daughter. Given her—condition—her body is constantly degrading and requires expensive balm to preserve which can be purchased from the town’s spindly old vendor. That’s where you can also buy artifacts that grant passive bonuses such as generating more money from jobs as well as gifts and extra rooms for your homunculi. 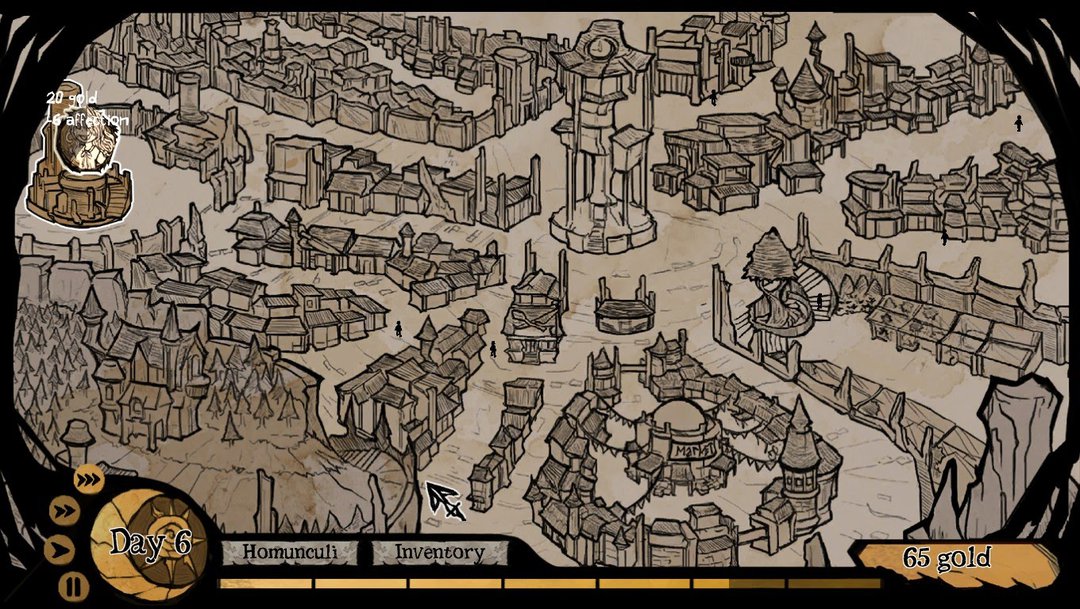 The town of Salach is full of businesses looking for work that you can make your daughters do.

Of course, you have to remember that your homunculi may as well be real people, even if they’re made of meat and clay. They have affinities, which decrease or increase depending on how you interact with them. Send your homunculi to work too much without giving them any gifts, and their affinity will decrease to the point where they will run away. However, if you raise their affinity, they reciprocate that affinity with status bonuses.

The affinity system in My Lovely Daughter is, simply put, bittersweet. Of course, Faust himself doesn’t care much for what happens to his homunculi daughters, but as a player, it’s different. Homunculi have legitimately humanizing qualities; in letters they leave under the doors to their rooms, they detail how villagers treat them as monsters, how they only want to fit in and be like others, constantly doubting if Faust truly is their father. Having all of these reminders of the homunculi as characters makes it more difficult to finally sacrifice them for your actual daughter, who you only know as a dead body on a bed. The systems and game mechanics in this game are actually very good, it's just sometimes hard to think critically about them while you are horrified about the acts you are undertaking.

In the end, the goal of the game is resurrecting your daughter, which takes quite a while. Over the course of my game I’ve only gotten one of the multiple endings, and even then it wasn’t anything remotely close to a good ending. My Lovely Daughter has a replayability that isn’t like many others, because as much fun as the game is, I found myself continuously playing to know what happens at the end. The story of the game and its characters are shrouded in mystery, and for me, much of it still is. 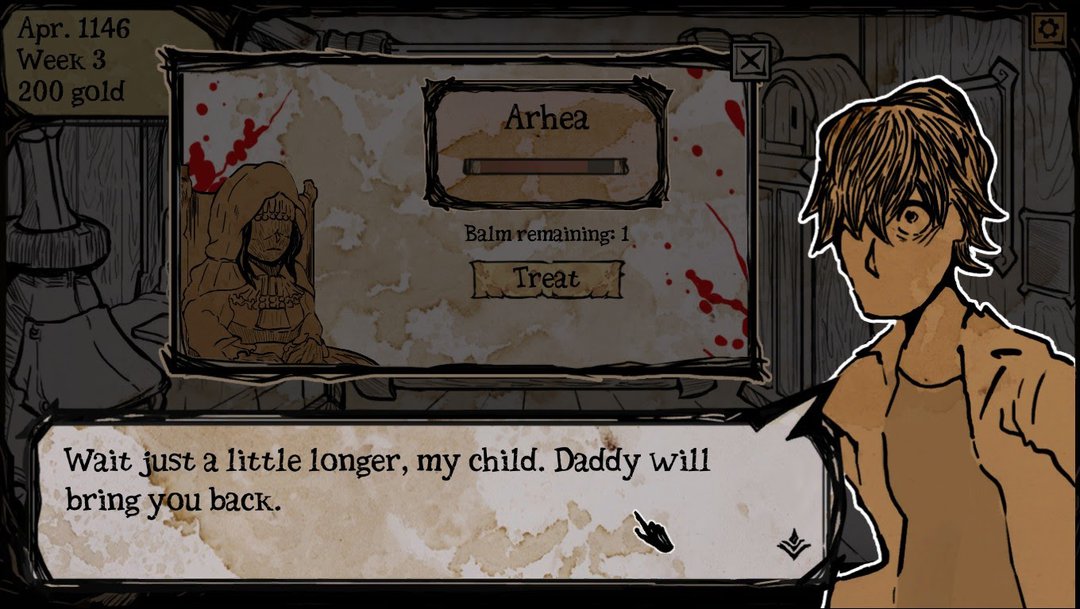 Daddy’s apparently also gone a bit off his rocker.

My Lovely Daughter truly is an discomforting game. It asks the player to act in the interests of the main character instead of their own, and in a game like this that means doing things that you personally might never do. Behind every one of Faust’s actions is you, and you end up feeling partially responsible for the fates of the daughters that you create. It is a sober reminder of the fate of children in families where behavior like Faust’s, parents that see their children as means to an end instead of as children, is normal. My Lovely Daughter certainly isn’t for everyone, it is a tough game to enjoy, but not a tough game to be entertained by. If you’re looking for a game that’s not just about being fun, but also has a message to deliver, take a look at My Lovely Daughter.