Crafty Games has a history with Brandon Sanderson’s Mistborn universe. Before Sanderson took over the Wheel of Time series and became a household name, Crafty Games got his blessing to create a Mistborn tabletop RPG, which Sanderson himself was heavily involved in designing. All in all, it’s safe to say that Crafty Games knew what they were getting into when they set out to create an all new board game set in that same universe.

If you are not familiar with Mistborn, it’s a book series that follows a band of outlaws and rebels during the last days of the so-called Final Empire. The Empire is controlled by the Lord Ruler and the noble Houses, who use their wealth and power to maintain order at the expense of the masses. In Mistborn: House War each player becomes the head of one of the Houses and competes for the Lord Ruler’s favor - or secretly tries to collapse the Empire. 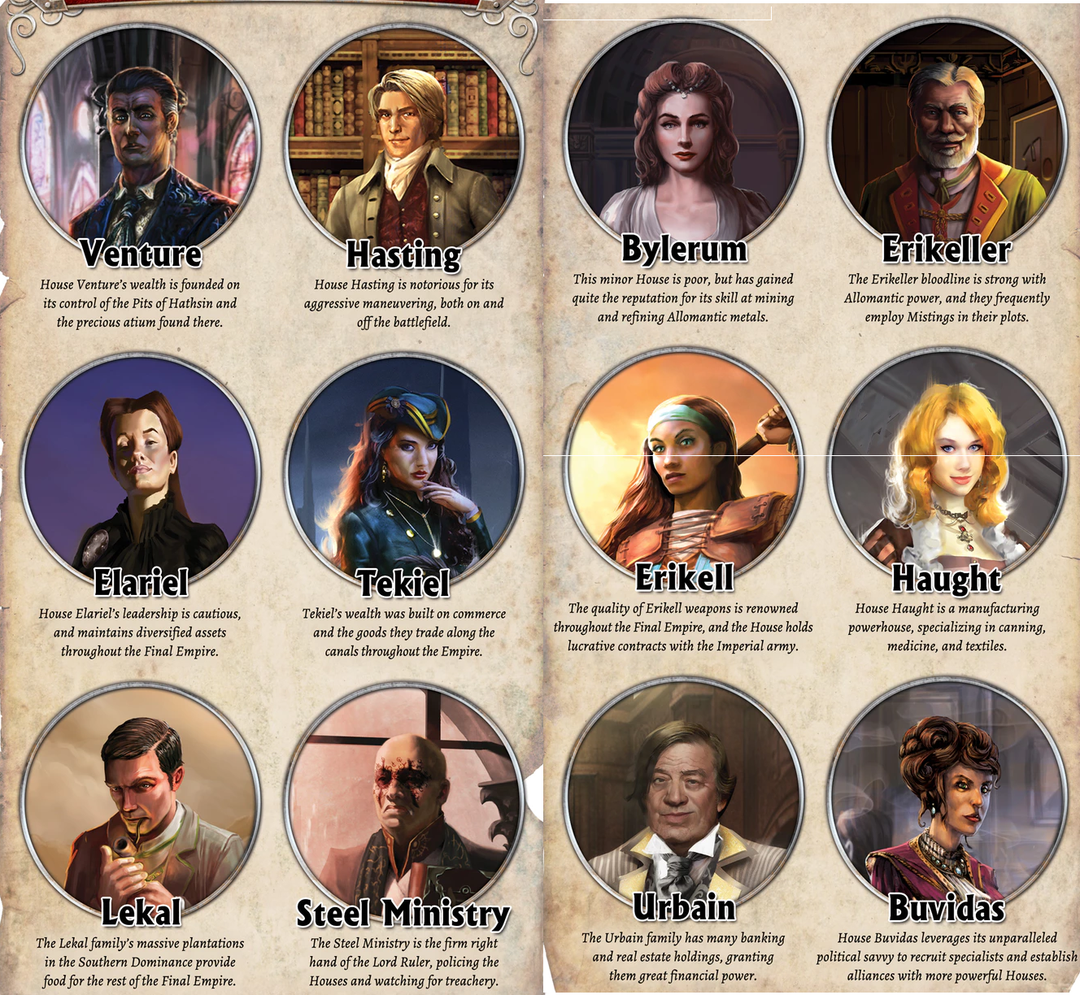 The major players of the Final Empire.

I got to speak about this game with a Crafty Games representative at PAX Unplugged. My biggest question was why they had decided to make a game based on the Houses, rather than following the main characters of the books - Kelsier, Vin, and their street crews. His answer was that the biggest challenge in creating a game like this was “finding the adventure.” The obvious choice would be to follow the characters that people already know, but then they also know what is supposed to happen. This setup allows for more flexibility in the outcome, as you'll see. Besides that, the Mistborn RPG is already focused on the street crews, and Crafty Games wanted to do something different. They wanted to explore the world in a new way, and show that there’s plenty of action and adventure to be had even away from the books’ protagonists.

He also confided that a major challenge was coming up with details about the Houses. Many of the major Houses are only talked about in passing in the Mistborn series, and don’t get much “screentime,” so to speak. One of the things that Crafty Games had to do for this game was come up with many new characters, fashions, and spheres of influence for these powerful families - with each decision okayed by Sanderson or his creative team. 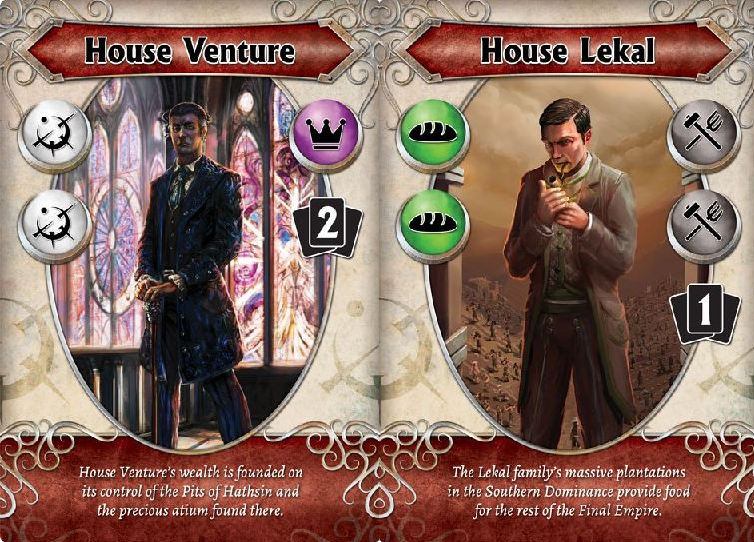 The Gameplay: Resources And Politics

Mistborn: House War plays like some strange lovechild of a basic Eurogame and Munchkin. Each House wants to gather resources, then use those resources to solve various problems that arise in the Empire. By doing so they earn the Lord Ruler’s Favor, which is this game’s version of Victory Points.

However, these problems are expensive and difficult to resolve, and a single player often won’t be able to do it. This leads to a lot of Munchkin-esque deals of “help me with this encounter and I’ll give you resources/points/something else.” If a problem goes unsolved for too long it “erupts,” which causes Unrest and hastens the end of the game. An unsolved problem may have other effects as well.

There are also Personality cards, which have various effects.

There are two ways that Mistborn: House War can end. The more common way is that Vin (the leader of the rebels) is flipped off of the problem deck and resolved one way or the other - either she is defeated or she erupts. When that happens the player with the most Favor wins. Note that Vin is worth a great deal of Unrest, so if she erupts it will often - though not necessarily - max out the Unrest meter and trigger the other ending instead.

That brings us to the other way this game can end: if too many problems erupt, the Unrest meter will rise all the way to 8 and the Final Empire will collapse. In that case, the player with the least Favor wins, because he or she is the most distant from the Lord Ruler and least likely to be caught up in the backlash. This is a great addition both in terms of mechanics and story: gameplay-wise it means that nobody is ever really out. If you’re way behind on points, you just shift your strategy to undermine the others and win by losing, so to speak. Plot-wise, it adds a sense of real weight to your decisions and puts some urgency behind all the squabbling. Fighting for position is the core of the game, but you do need to remember that you’re still part of the Final Empire, and are bound up in its fate - unless, of course, you prefer to stand back and let it fall. 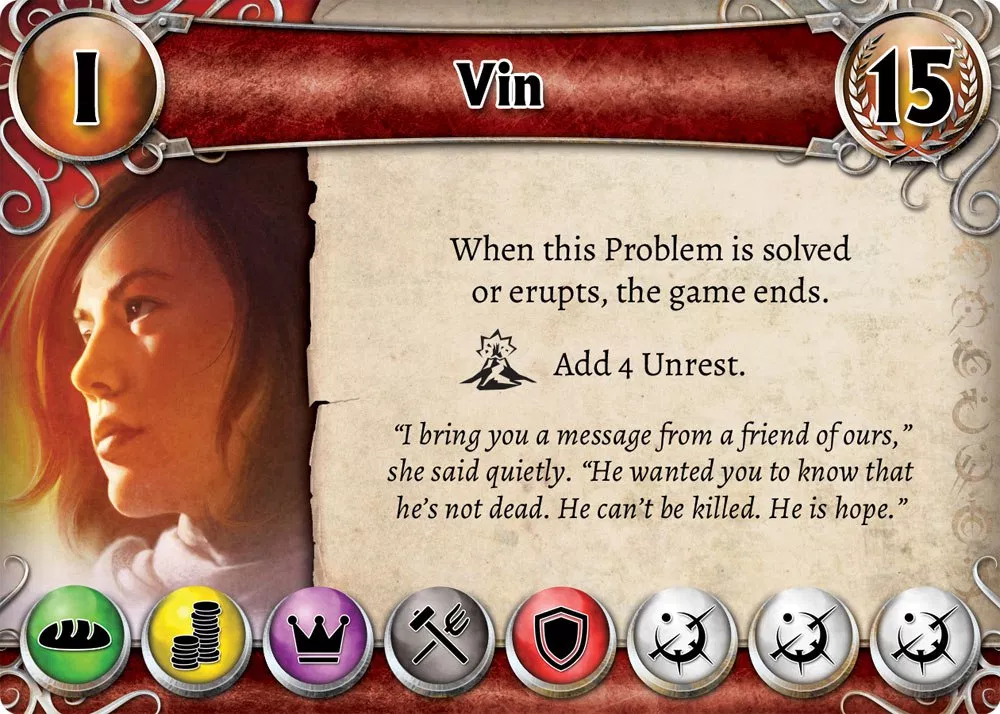 Solving Vin is not so easy: it requires one of each normal resource and three atium, which is the rarest resource and usually wild. However, solving this problem earns you a whopping 15 Favor.

Closing Thoughts: Mistborn From The Other Side

When I first learned that there was a new Mistborn board game coming out, I assumed (like many other people) that it would be about fighting against the nobility and the Lord Ruler. Putting the players in the roles of heads of Houses instead is an unexpected twist, but not an unwelcome one.

Fans of resource management and backstabbing politics may want to check this one out. It reminds me somewhat of Lords of Waterdeep, Cosmic Encounter, and - oddly - it has a dash of the My Little Pony CCG in there with the cooperative problem solving. While the game is certainly good enough to stand on its own merits, fans of the Mistborn series in particular might enjoy the chance to see that world from a new perspective. 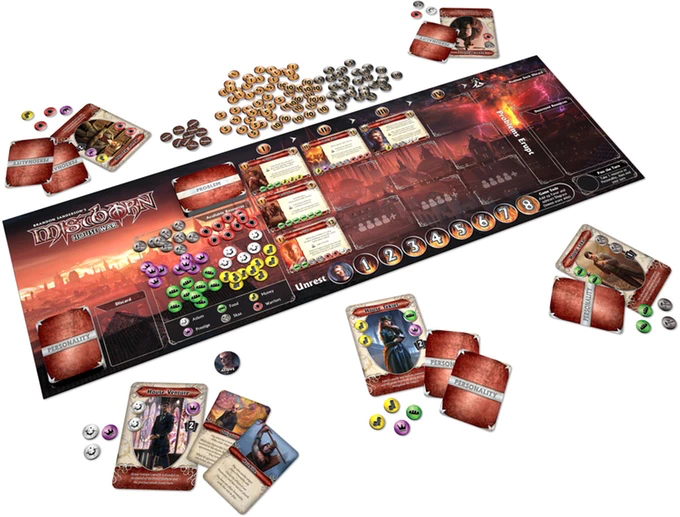