A Master Storyteller’s Take On Tabletop

Brandon Sanderson is a bestselling fantasy author who is known for his Stormlight Archive series, for writing the last few books of The Wheel of Time after Robert Jordan’s passing, and - the reason this article exists - for the Mistborn series. He’s one of my favorite authors but, regardless of your personal opinion, this is clearly a man who knows how to tell a story.

If you’re not familiar with Sanderson’s Mistborn series, it takes place in a bleak and brutal world called Scadrial, a place where an eternal cloud of ash in the air is all that protects the world from its too-close sun, nobles fight one another for supremacy while slaves live off of their crumbs, and the cruel regime of the immortal Lord Ruler holds back something even worse. It’s also a world where even slaves can awaken to incredible power, Mistborn dance through the air on strings of magic, and street crews who are closer than family fight together to survive.

The Mistborn Adventure RPG takes place, naturally, in the world of Scadrial. It is a fairly rules-light tabletop with a heavy focus on character and storytelling. The system is somewhat reminiscent of the World of Darkness RPGs, where your stats, Traits, tools, etc. all contribute to a pool of dice that you roll to determine success or failure. However, the Rulebook itself states many times that the mechanics should always take a backseat to the story.

Creating Your Character Is Creating A Story

As someone who mostly plays Pathfinder, where characters are blocks of stats with backgrounds taped to them, Mistborn Adventure RPG was quite a change for me. Building a character for Mistborn is answering a series of questions, and not just things like “what race is he?” and “how hard can he swing a sword?” Every question is geared to figure out not just what you can do, but who you are, and what your place is in the world.

In fact, the very first question you have to answer - as a group - is what your overall Crew will be. Are you a group of escaped slaves? A disgraced noble and her few remaining followers? Daring rebels banding together to take on the Lord Ruler and his Steel Ministry (good luck with that)? You must answer three questions for the Crew: its Cause, Target, and Method. These appear on character sheets but will be the same for everyone in the Crew. Only once you’ve settled that can you move on to figuring out who you, individually, are. 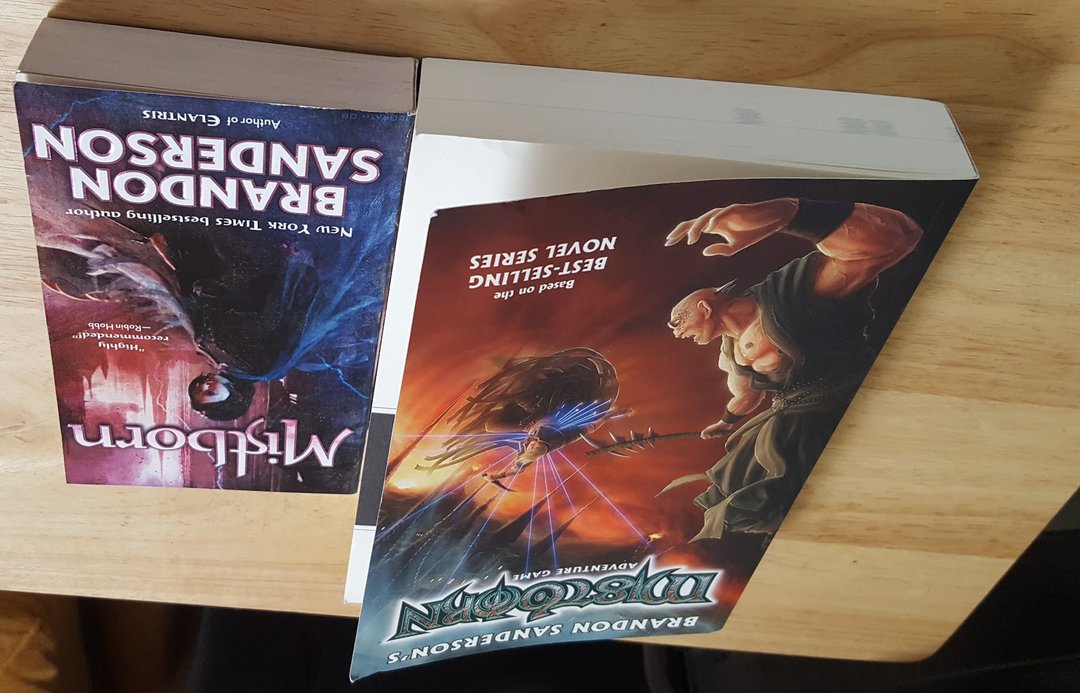 The rulebook is bigger than the novel it’s based on, but don’t worry! Only a tiny fraction is for character creation and basic rules.

The questions you answer during character creation drive both the overall plot and your character’s personal growth. These are things like your character’s Tragedy, a painful event from the past, and his Destiny; in other words, his overarching goal. Of course, you’ll also determine things like stats and abilities - after all, you do need to be able to function within the game. This leads to another interesting point: your stats and skills don’t need to have anything to do with combat, or at least not physical combat.

The Rulebook has scattered entries from Sanderson himself providing insight or giving his thoughts on various aspects of the game. One of my personal favorites reads, “Power in Mistborn is about more than just who, or what, you can kill - much more. It’s about what you can accomplish.” In other words, a good fixer with the right connections and resources can be just as powerful, if not more so, than a Mistborn who can fly through the air and kill people with the Push of a coin.

The Mistborn Adventure Game is an RPG inspired by a guy who writes books and likes stories. That’s great, and it does a fine job of guiding players to fit into a rich and detailed world, but at the end of the day it is still a game. So what is it like to play?

As I mentioned before, the overall feel of the Mistborn Adventure Game is pretty similar to World of Darkness. Not only does it rely on rolling pools of dice, but it has a blend of combat and backstabbing politics that is pretty rare in, or at least not directly encouraged by, games such as Pathfinder and Dungeons and Dragons.

Mistborn is billed as being rules-light, and that’s definitely true. Most of the rules are made up on the fly by the Narrator, and what’s in the book are just guidelines and suggestions. While Pathfinder will tell you exactly how much of a penalty you’ll take for trying to hit something in the dark with a broken weapon from horseback (and you’ll have to take ten minutes to look up all the rules and crunch the numbers) Mistborn just has the Narrator subtract an “appropriate” number of dice from your dice pool before you roll - probably just one, maybe two or more in especially difficult situations. However, the focus in Mistborn is always on the story. What few game mechanics there are only exist to serve the plot, and the rulebook itself encourages throwing away anything that gets in the way of that. 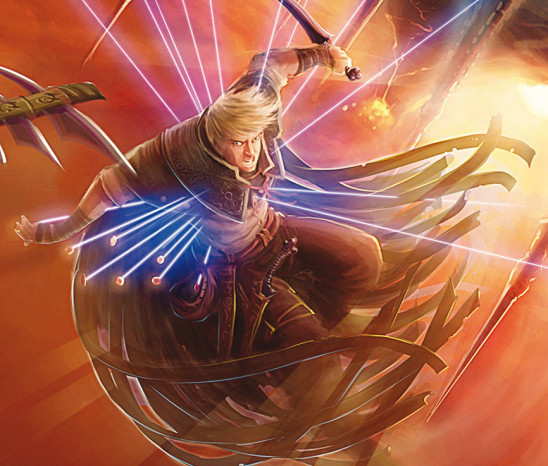 The one concept that even experienced role players might struggle with is how the dice work. It’s simple enough in practice, but I had some trouble wrapping my head around it while reading the book, so I’ll try to boil it down.

There is no set number that is a “success.” When you roll your pool of dice, what you’re looking for is matching numbers, i.e. a set of two or more of the same number rolled. It also doesn’t matter how many matching results you get: two 3s will have the same outcome as ten 3s. If you don’t have a match, the result is considered to be zero. Any 6s that you roll are used to “nudge” the outcome, improving your success or mitigating your failure.

Since you’re rolling D6s, and 6s turn to Nudges, that means that no result can be higher than a 5 no matter how many dice you roll. Once you have your result, the Narrator subtracts the Difficulty of the check (a number from 1 to 5 that he or she has previously decided on) from it. If the end result is zero or higher then the check is a success, with higher numbers being “better” successes. For something complicated like picking a complex lock or ferreting out information about a well-protected noble, the Narrator may determine that a certain number of successes are needed.

Technically an opposed check with no chance of injury to either party is a Contest, while an opposed check where one character stands to be physically, emotionally, or socially hurt is a Conflict, but that seems to be a distinction without much of a difference in mechanical terms.

A session of Mistborn Adventure is, in the simplest terms, a combination of role-playing as determined by the questions you answered about your Crew and character, and rolling dice as determined by your stats, traits, abilities, and equipment.

One Major Flaw: How Is Your Mistborn Knowledge?

One of the first notes that Sanderson puts in the rulebook is that, while of course he hopes that you’ll read and love the Mistborn series, his goal was to create a game that could be enjoyed even if you haven’t. While you certainly can play even if you’ve never heard of Mistborn, you are expected to have a certain degree of knowledge about Scadrial. You’ll at least need to brush up on the Final Empire, the different types of magic, and a lot of new terminology. 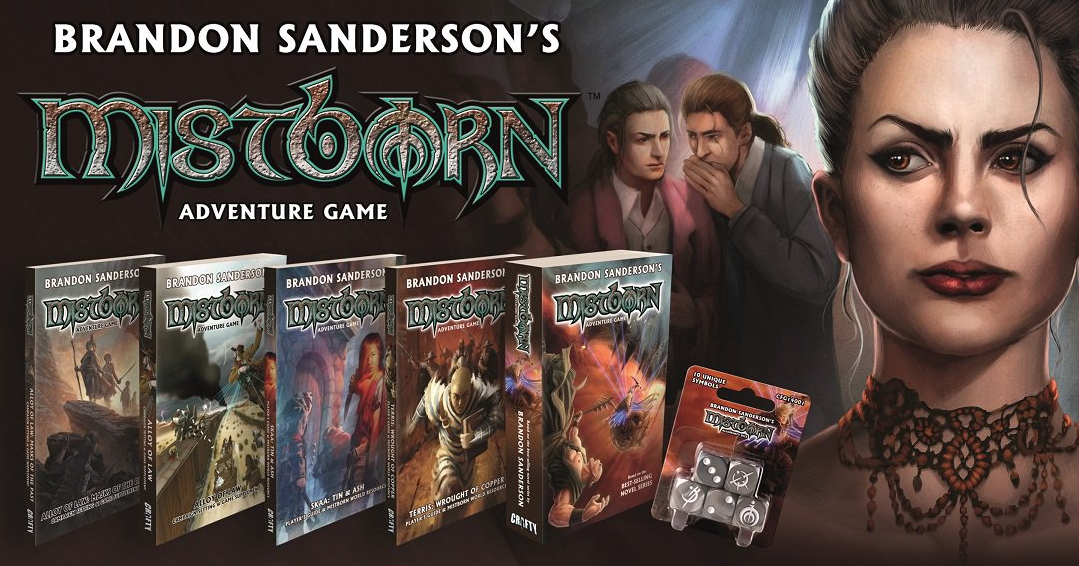 And that’s not even getting into the supplemental books.

Of course, any RPG will require you to know a bit about the world before you play, but Mistborn has so many unfamiliar concepts that this stands out more than usual. Someone who’s never played Dungeons and Dragons could still tell you what a Wizard is, and a Fighter is pretty self-explanatory, but someone who’s never read Mistborn won’t know what a Tineye or a Smoker can do. I’ve mentioned several times that you can play as a Mistborn, but you could also play as a Misting, a Keeper, or even a Kandra. Do you want to be a Terrisman or a Skaa? If you have no idea what I just said, then you see the problem: You almost have to learn a new language in order to function within Scadrial, and there are no common concepts like elves and dwarves - or vampires and werewolves, if you prefer World of Darkness - to get you started.

It’s not a deal breaker for me, at least, but be prepared to do some homework before you play.

Still A Story Worth Telling

The Mistborn Adventure Game accomplishes what it sets out to do: Give players a game that’s easy to learn and play and allows them to live and play within the world of Scadrial. I don’t know that I love the system of rolling for pairs and Nudges - it’s less intuitive than having a fixed “success” number like World of Darkness, or rolling and adding your skill as in Dungeons and Dragons. It’s supposed to be less random than those systems, but unless your dice pool is at least seven (which is quite large, the absolute maximum pool is ten), dice can still do what dice do and leave you twisting.

However, what I find most valuable in the book is not the rules or mechanics, but the character creation guidelines and the interjections from Brandon Sanderson. It’s obvious that this is more than just a game to him and his team - it’s a world that they’ve spent years crafting, and they’re helping us to experience it as deeply as possible. In the process, they are also teaching us how to create and tell our own stories.

In the past, I’ve sometimes tried to understand characters - including in my own stories - by creating them in Pathfinder or GURPS. I think I now have a new favorite system for doing that. I’ll definitely look forward to doing some more character and world building so that I can get this one back to the table.

The Mistborn Adventure Game is a decent tabletop RPG, but it is an absolute master class in character building and storytelling.