The Blue Bomber Turns It Up To 11 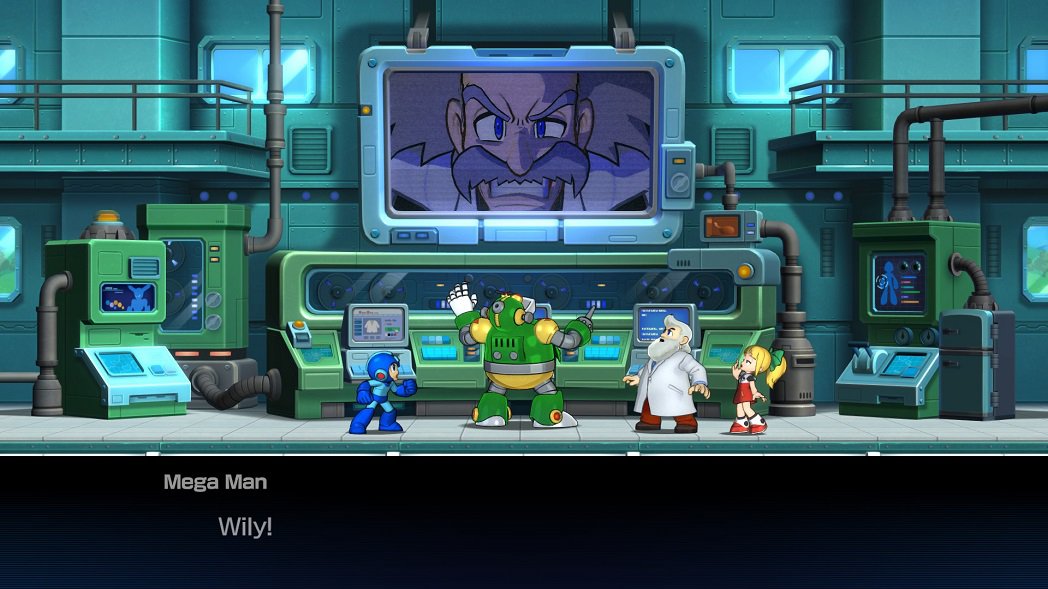 After eight long years of nothing, we finally have a new entry in the main Mega Man series. Mega Man 11 was officially released on October 2nd, and the internet has been… pretty quiet about it, actually.

Capcom had previously released a single level as a demo, which I reviewed a month ago, and most of what I said there still holds true. However, now that I’ve finished the game as a whole, we can take a deeper look. Can this game hold up to a venerated series so long past its prime? 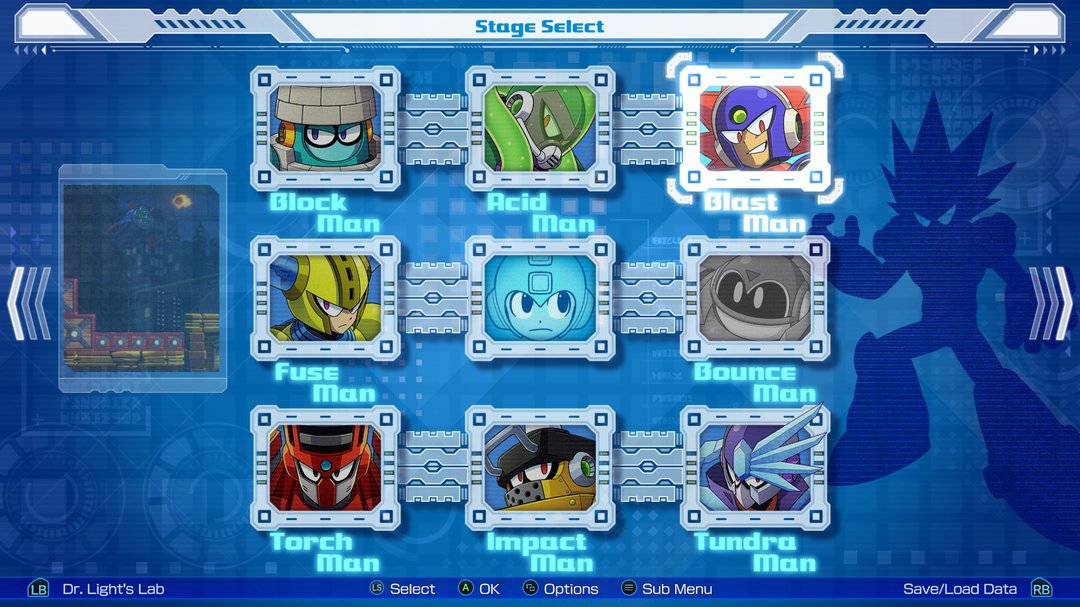 Get Equipped With Double Gear

As anyone who’s been following this game knows, the big new attraction is the Double Gear System. This lets Mega Man use two different abilities: Speed Gear and Power Gear. The Speed Gear boosts your speed immensely - which, in-game, actually slows down all of the action so that you can time your moves perfectly. The Power Gear greatly boosts your damage output by allowing you to charge up a double shot from your Mega Buster, or fire stronger versions of the boss weapons you earn. The downside is that you can only use the system briefly before you need to let it cool down. If it overheats, you might be stuck without it during a crucial moment.

So, I’m going to come right out and say it: The Double Gear System feels great. Having an ace in the hole is always nice, particularly in a challenging game like Mega Man. Using it effectively can really make you feel like a badass, blasting through common enemies and getting yourself out of tight spots with ease. 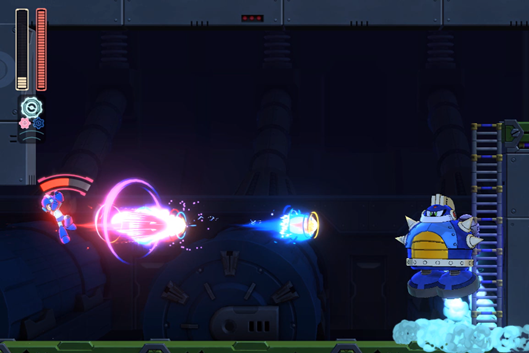 I’m especially fond of the Speed Gear, particularly once you unlock the added booster for it (which makes Mega Man keep moving at the same speed while everything else slows down). It feels like living out a scene from an anime where the main character cuts down a dozen enemies before they can move.

The Double Gear System also gives you a last resort super-ability: When Mega Man is low on health, he can activate both gears at once to become nearly unstoppable for a few seconds. The problem is that you can’t turn that ability off, so if you don’t solve your problem quickly you’ll be stuck with overheated, useless Gears. It's all or nothing for those few seconds, so you have to make it count!

There Are Difficulty Spikes. And Regular Spikes

However, don’t think that just because you can double your damage and practically stop time that the game is going to be easy. This is Mega Man after all, and this one was designed with Gears in mind, so you’d better be prepared to die. A lot. Actually, this brings me to one of my major issues with the game: The difficulty is kind of all over the place. 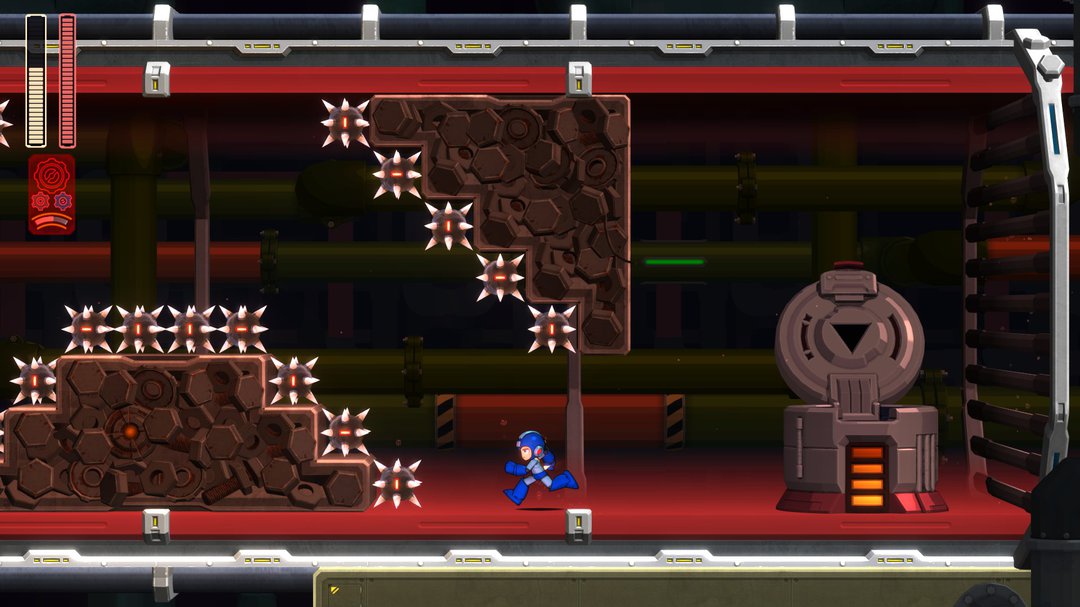 Protip: you can buy spike guards. Do that.

Now, I grew up on this series and I consider myself to be pretty good at it. I cruised through a couple of the levels without dying once. I died a few times on most stages, but was able to get through them with a reasonable amount of effort. However, a few of the levels were controller-breakingly hard. Let me be clear: I’m not complaining because a Mega Man game is challenging. I’m complaining because the difficulty spikes randomly, rather than following a logical curve that peaks at the end of the game.

Impact Man’s stage has a section where you’re stuck on a small, slow-moving platform, surrounded by spikes, and under assault from all directions by drill enemies that come flying out of the walls. You can see where they’ll come from, but it doesn’t really matter since you have nowhere to dodge to. Acid Man’s stage has several underwater parts where you have to jump nearly perfectly around banks of spikes, all while being pushed along by the current. I walked into the first level of Wily’s fortress with nine extra lives and finished it with none, then found the rest of the fortress (including Wily himself!) absolutely trivial by comparison. I have no problems with a game being hard; I have a big problem with a game having randomly placed sections that are 10x harder than the rest of it. 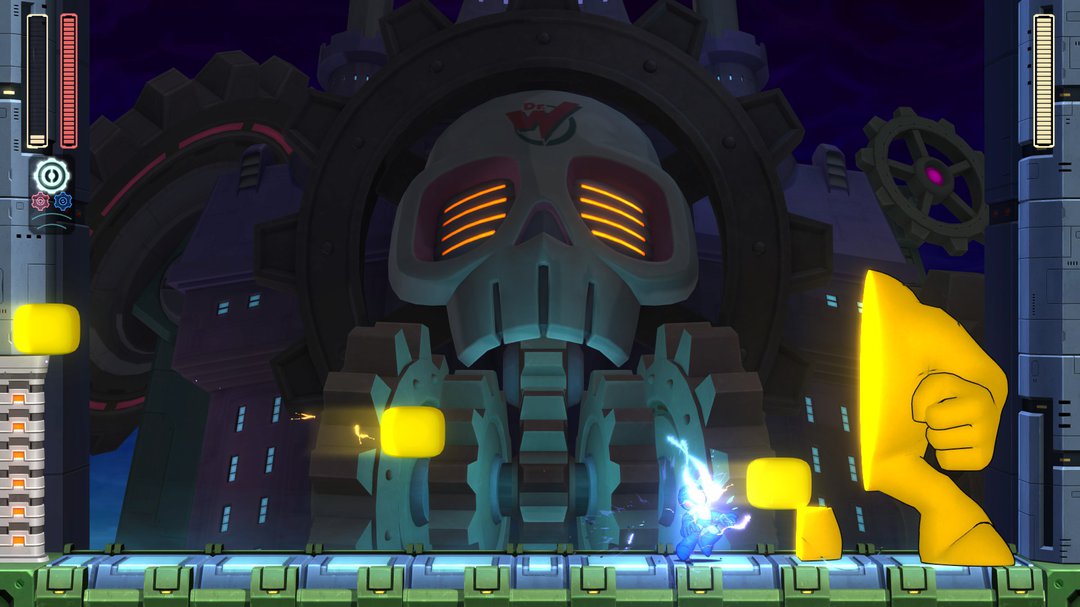 The moment when every Mega Man veteran whispers, "Oh, no".

Get Equipped With Backstory

Another way that Mega Man 11 seeks to build on the old formula is with a greater focus on story. Admittedly, saying something has more plot than a classic game in this series is a bit like saying someplace has more water than a desert, but we do get a couple juicy bits of lore.

For one thing, we finally get an explanation in the main canon of why Dr. Light and Dr. Wily had their falling-out, and why Wily is now so cartoonishly evil. There are even cutscenes, complete with voice acting! Buried in the game and item descriptions, we also learn tidbits about Mega Man and his gear. Did you know that the Mega Buster’s shots are concentrated solar energy? Because I didn’t. 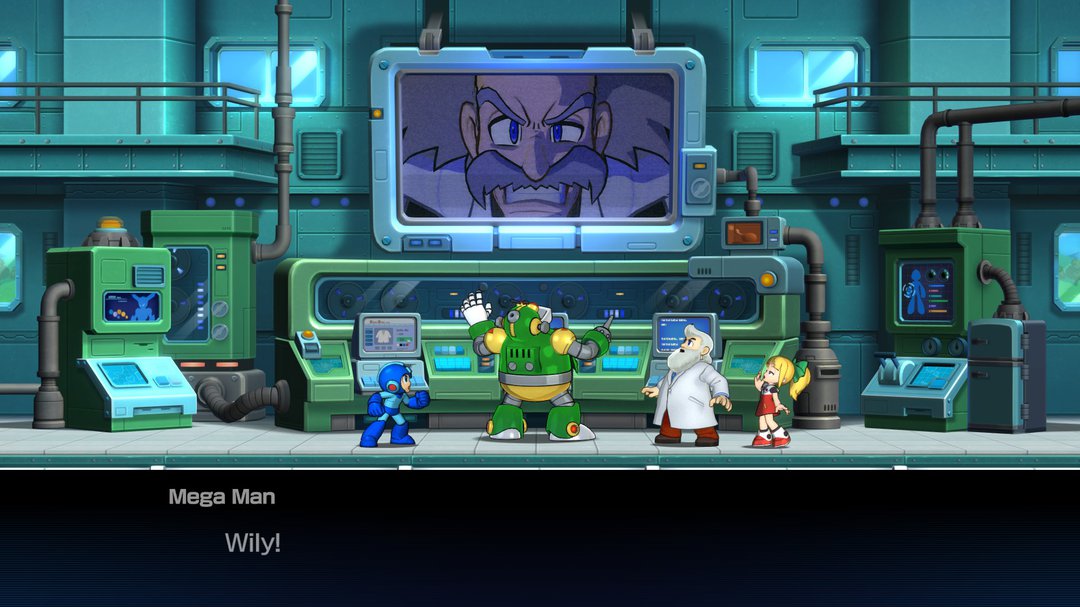 Gasp! Who could have forseen this sinister plan?!

As you might expect, the plot still takes a backseat to the gameplay, but Mega Man fans should be happy to finally know how things got to where they are today.

Get Equipped With… Equipment...

Aside from the Double Gear System, Mega Man 11 boosts the blue bomber’s power in another way: he can install 'chips' to improve his abilities. These range from the Speed Gear booster that I mentioned earlier, to an item that keeps him from slipping on ice, to one that (somehow) causes more bolts to drop - bolts being what you use to create these chips in the first place. You unlock the chips mostly by beating levels, and there is no limit to how many you can use at once, so Mega Man will just keep on improving as you play.

Bolts can also be used to craft items like extra lives and energy tanks, so you can load up before you go into an especially hard level. That’s how I got nine extra lives before going into the first level of Wily’s fortress - and it was a good thing too, because I still nearly didn’t make it. I will say, however, that I think the items are a bit too cheap to make. Once I passed the halfway point of the game I was able to have nine lives and nine energy tanks practically at all times, which made boss battles nearly irrelevant. 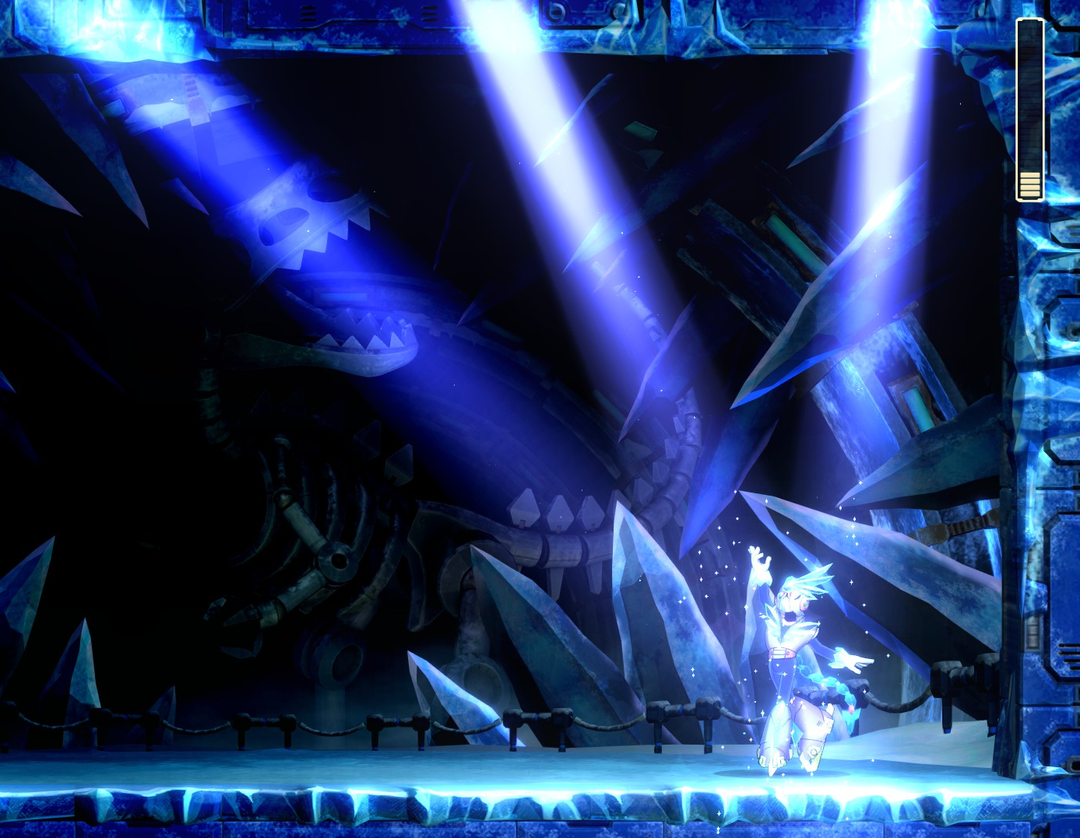 Admittedly, I was playing on the standard difficulty, and it seems that on Superhero (the hardest difficulty) there are no drops in levels aside from the bolts, so those crafted items become a lot more important and you have to ration them a lot more effectively. That will be my next challenge to myself.

The Levels Seem Too Long, But The Game Seems Too Short

My single greatest complaint about the demo holds true for the full game. It’s not every level, not even most of them, but some are definitely just too long. Three or four times throughout the game I found myself saying, “Good god, this is still going?” There came points where I felt like the stage had thrown everything it had at me, and was just being stretched out to add some playtime.

However, on the subject of playtime, when I got to the top of the fortress and landed the final shot on Dr. Wily, I went back and checked my playtime: Four hours. Four hours to beat a $30 game. 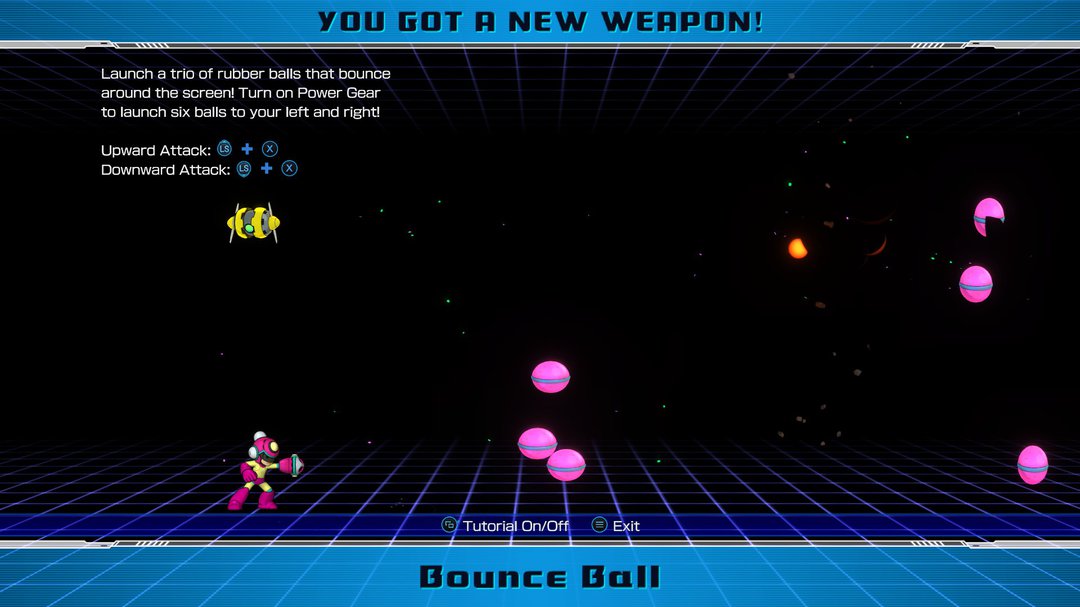 And that includes the time I spent giggling about this weapon's name.

Who Is It For, And Is It Worth It?

Granted, there is still a lot more value I can get out of Mega Man 11. I fully intend to try playing on Superhero mode to give my skills a real test, and I haven’t even looked at the challenges yet. Still, I feel that $30 is pretty steep for a game whose content only lasts a few hours. That price tag is my main sticking point right now because, like I pointed out when I reviewed the demo, you can buy Mega Man Legacy Collection 1 and 2 (which would get you all ten of the previous Mega Man games) for $40 on Steam.

There’s no doubt that Mega Man 11 is a great game that delivers classic action in a shiny, modernized package, but is it really worth 75% of the entire rest of the series? I’m inclined to say no. 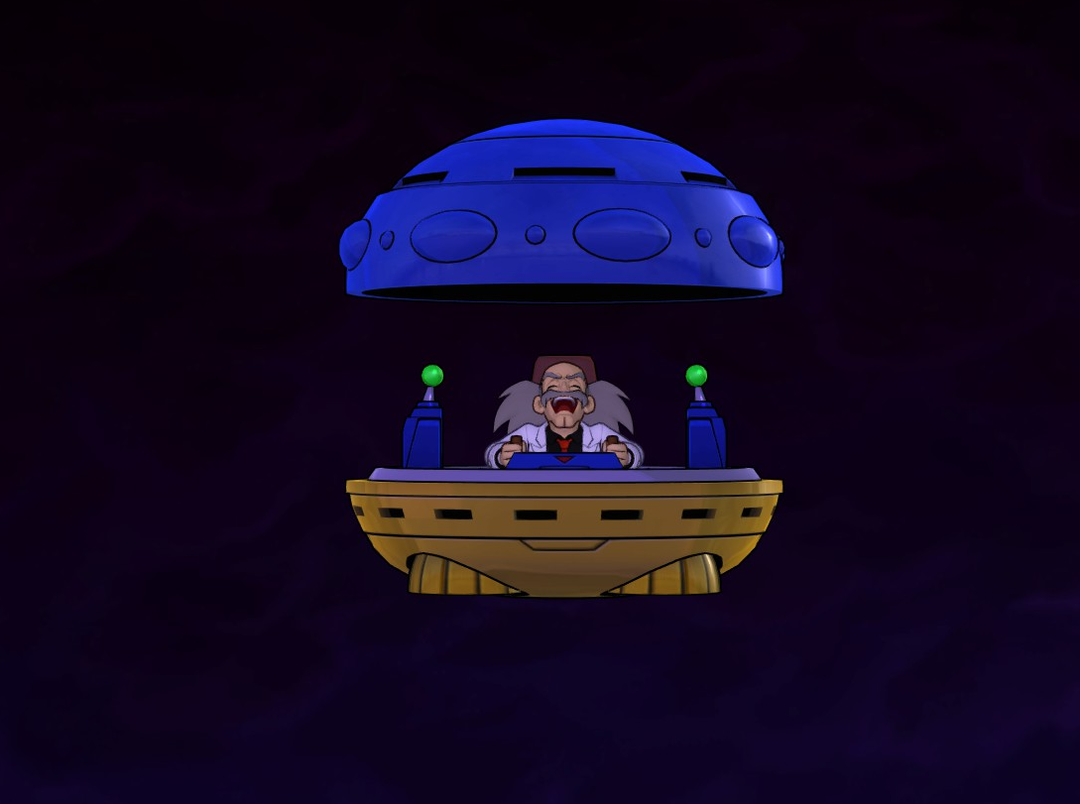 I have to give credit where credit is due: they finally toned down Wily's flying saucer, AKA the most obnoxious sound in gaming.

It’s also not a great entry point for new players to the series. I say that because of the main attraction: The Double Gear system. I would hate for a new would-be fan to play Mega Man 11, fall in love with the Gears, and then be disappointed when they aren’t in other games. They’re a great gimmick just for this one entry, but that’s exactly why I wouldn’t want a new player to become reliant on them.

So, what’s the final word here? If, like me, you’re a huge fan who spent your childhood playing every Mega Man game as it came out, then… well, you’ve probably already bought this one, too. If you’re a more casual fan, I definitely still recommend buying it, but don’t pay full price. Wait for the inevitable sale and snag it for $20 instead.

Mission complete. Returning to base.