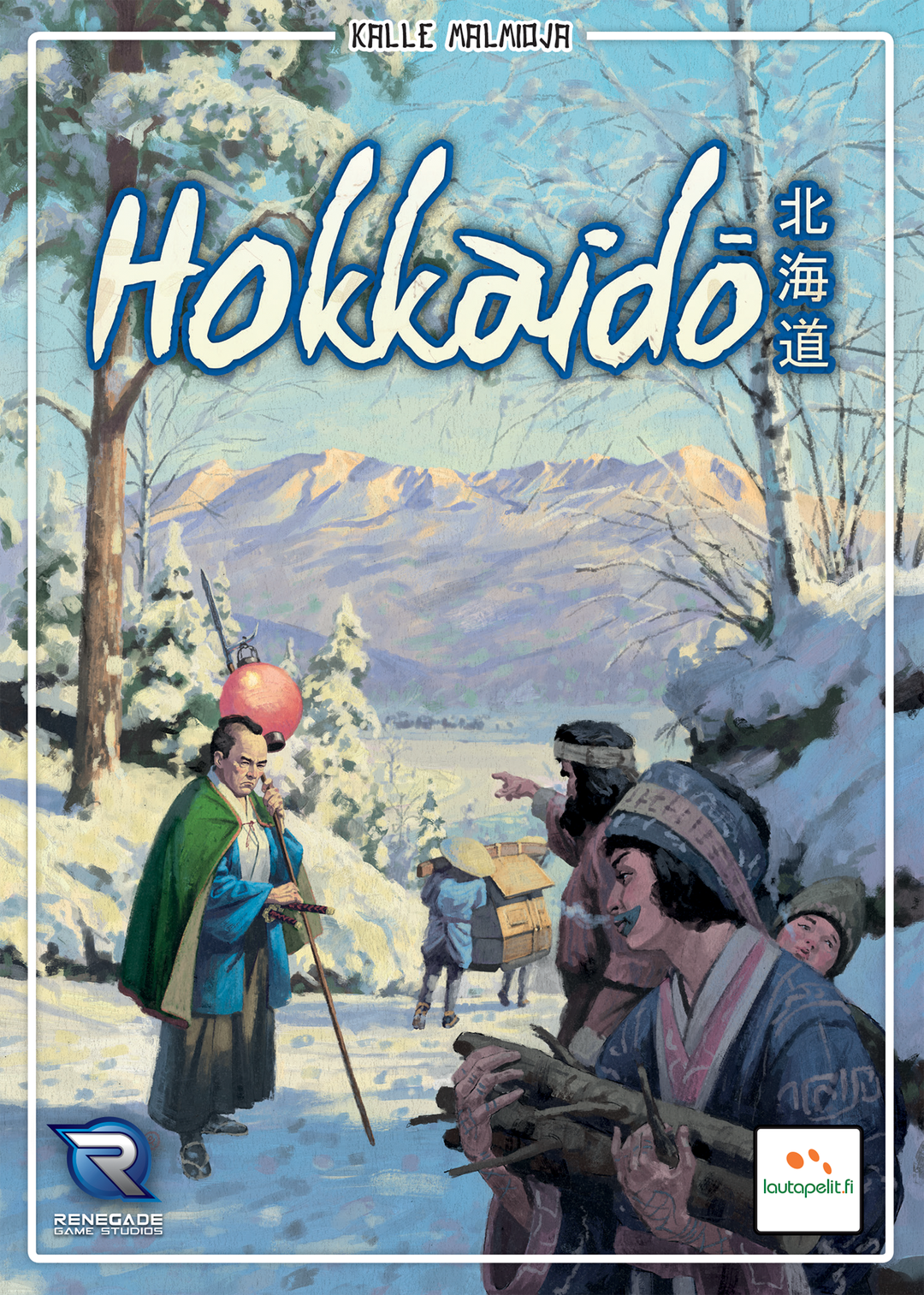 Despite never having been to the literal Hokkaido, Japan’s northern island, I can safely say now that it factors into two of my favorite things in life. It’s the name of one of my favorite local Japanese restaurants, and now it’s also among the excellent board games I’ve played. This tiny little box from Renegade packs quite a punch, so if you’re looking for more solid strategy titles but have limited shelf space, love small boxes you can toss in travel bags, or simply enjoy a crunchy game that plays in thirty minutes or less, have a closer look with me.

Do you have what it takes to layer a ton of cards into the most points anyone's ever seen? What you see here is a factory marvel, but a total town fail.

The premise of Hokkaido is a simple one: as the people move to new lands (this is a sequel to Renegade’s Honshu after all), they’ll be discovering and building in a difficult and mountainous region. You do this as the players by drafting cards, each with 6 squares of terrain on them. Each turn you layer one new card into your lands, flipping them any which way you desire so long as you follow the placement rules, and at the end of twelve drafting rounds, whoever has the most points within their territory wins the game. It’s easy to just jump in, and while all the various terrain scoring differently seems like a lot to track at first, after some very limited exposure we soon remembered that most things were worth about two or three points apiece. I was able to memorize the scoring rules before the end of my first game, and I noticed my friends stopped asking for repeats of the point values of things right about the same time, too.

The game doesn’t get much more complicated than that. There are some rules to challenge you as the game progresses, of course, which is where the strategy and fun comes in. There are requirements that you always overlap at least one terrain square when playing a new card and that you cannot cover mountains or lakes with another card. Your mountains have to form a continuous path across your land, and you cannot fork them at any time (they must remain as an unbroken chain). And there are some other considerations like having to build up your towns equally, because the smaller of the largest towns on either side of your mountain range will be the one you score. There are also some limited rules for playing and using resource cubes, either to play a tile and terraform terrain to a more favorable type or to save for extra points at a matching factory at game’s end. It does, very well, that classic bit of “how can I layer similar things together to score the most points” in a box a fraction of the size of many of its heavier, longer-playing cousins.

It looks like it might take up a decent bit of room, but in reality you can fit the full player count around a modestly sized table. **Burrito not included.

I have to say that Hokkaido certainly impressed me. I was a bit jaded going into my review playthroughs, looking at this as merely a simple strategy game: a small box, a deck of cards, some cubes, and some tokens. Probably full of dry drafting while stacking up points better than my friends, I thought. And, well honestly the game is a bit dry, but that doesn’t discount what it brings to the table. The theme isn’t going to win any awards for drawing you into the game’s world, but I will admit it results in some very pleasant and functional artwork on the cards. It reminded me, though, that drafting is never dry! That feeling you get from other drafting games, whether wargames like Inis or economic builders like 7 Wonders, is preserved here! At first it’s the excitement and tension of not knowing what you’ll be passed, making the best of a worsening situation as the drafting hands get smaller and smaller. As you get more comfortable with play, and you start looking at your neighbors, you also get a sense of what you could be denying others rather than simply taking for yourself. Do you mess with your opponents, or do you take a card you really need instead?

No lie, we found ourselves going through all the familiar expressions that any good drafting game draws out in just our first game! One moment the game was easy, any card slotting in to our lands and the world full of possibilities, while twenty minutes later the classic cries of “WHERE DID I GO SO HORRIBLY WRONG” filled the room. Sure, I could draft that factory in the color I’d been waiting for, but I’d be forced to cover up another valuable square to slot it in. During one round I was passed all cards with mountains on them. I agonized over how hard it’d become to place mountains without ruining my setup; there were basically no good moves on that hand, only minimizing the effects of what I was forced to pick from. Though I took some solace in knowing the other players were feeling the pinch the same as me. For a game that boils down to “draft a card and slot it into your play area” every turn, the decisions to be made are always sharp and exciting, and interesting decisions are the heart of any good board game.

Despite the dry theme, the artwork is really quite lovely.

Overall, I had way more fun with Hokkaido than I thought I’d have going in. We found that it stuck to its quick play time even given a little bit of that analysis paralysis you tend to see with strategy games; one player agonizing over which card to draft didn’t slow the game down more than an extra minute or so per hand, which was quite the pleasant surprise. After just a few rounds of drafting, everyone understood the rules, making this game a cinch to teach at game night. And in classic small-box style, the game was quick to set up and reshuffle for extra games. There are also additional objective cards you can use to add more spice to your scoring should you play a ton of this game.

I’ve mentioned other light, card-based games in the past, such as in our spotlight of Button Shy games. In a lot of ways, Hokkaido reminds me of Circle the Wagons, another game about layering cards to score sets of symbols and special objectives. If you’re a fan of games like that but want something a little more meaty, Hokkaido is the perfect next step up. It has just enough extras in its resource cubes, terraforming tiles, and placement rules to add that little bit of extra depth you’re craving without becoming overly clunky. I could easily see ditching its original box for an even smaller storage solution, as well, for the diehards who want to fit the most games in their suitcase or shelf.

As small box strategy games go, you get a lot of bang for your buck, so if this sounds at all like your kind of game, or even if you’re just looking to expand more into the realm of strategy games, I wholeheartedly recommend you give Hokkaido a play. Or two, or three.