A Game That Requires A Stout Heart. Or At Least A Stout. 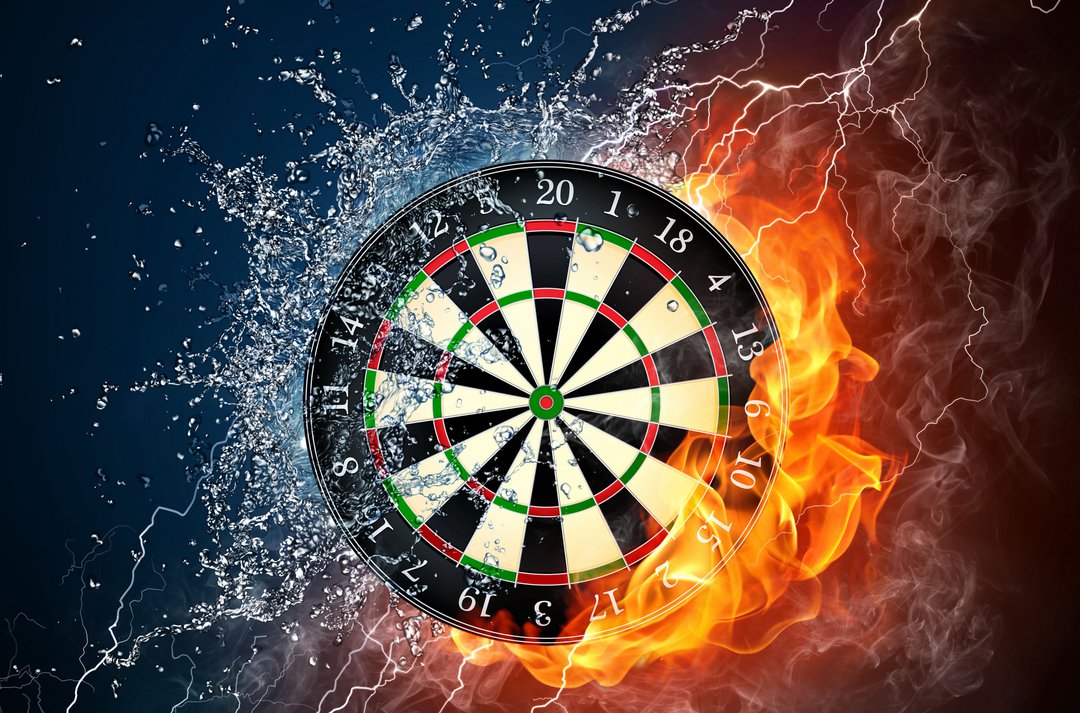 I recently had the opportunity to play a few rounds of the game Darts. The aptly-named game, which involves throwing the eponymous missiles at a board to score points, has received mixed but generally positive reviews both from casual players and professional blogs and magazines. The developers were not present at the time, but some fans of the game invited me to step in and give it a try, and I happily took the opportunity to do so.

Darts can be played with a number of different rulesets. I got to try two different versions of the game: 301 and Cricket. I’ll begin with 301, as it is much simpler, although a bit less interesting strategy-wise. Each player takes turns throwing three darts at the board, and adding whatever points they get to their scores. As the name suggests, the object of the game is to be the first player to 301 points. Note that you must reach 301 exactly. Going over that number results in a “bust,” and all the darts you threw that round are not counted toward your score. 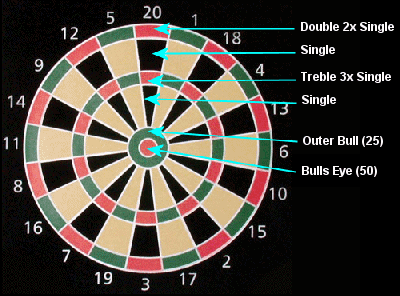 The numbers around the outside of the dartboard indicate how many points each section is worth. The “bulls-eye” (the circle at the middle of the board) is worth a whopping 50 points!

Cricket (which has no relation to the outdoor sport of the same name) is another variant of Darts that I found a lot more interesting. With the cricket rules, only the wedges worth 15-20 points and the bullseye are used. Landing a dart anywhere else is just a wasted throw. However, you also cannot score any points at all until you’ve landed a total of three darts in the same section. Once you’ve done that, any more hits to that section will add its value to your total score. For example, if I’m targeting the 20 wedge, my first three hits allow me to “claim” that wedge. Once I’ve claimed it for myself, hitting it with a fourth dart will score me 20 points.

Now here’s where it gets really interesting: If my opponent claims the same wedge as me, that wedge is now “closed,” and nobody can score on it. Cricket ends up being a bit of a balancing act as you try to raise your own score while blocking your opponent’s attempts to raise his. The winner is the player who lands three darts on all six scoring wedges and the bullseye, and has the higher score. If I finish all of my sections first, but my opponent has more points than me, the game continues until either I take the lead in points or he finishes closing out the remaining areas.

Overall, Darts is a fun if rather simplistic little game, best played in a casual setting with friends and perhaps a beer or twelve. 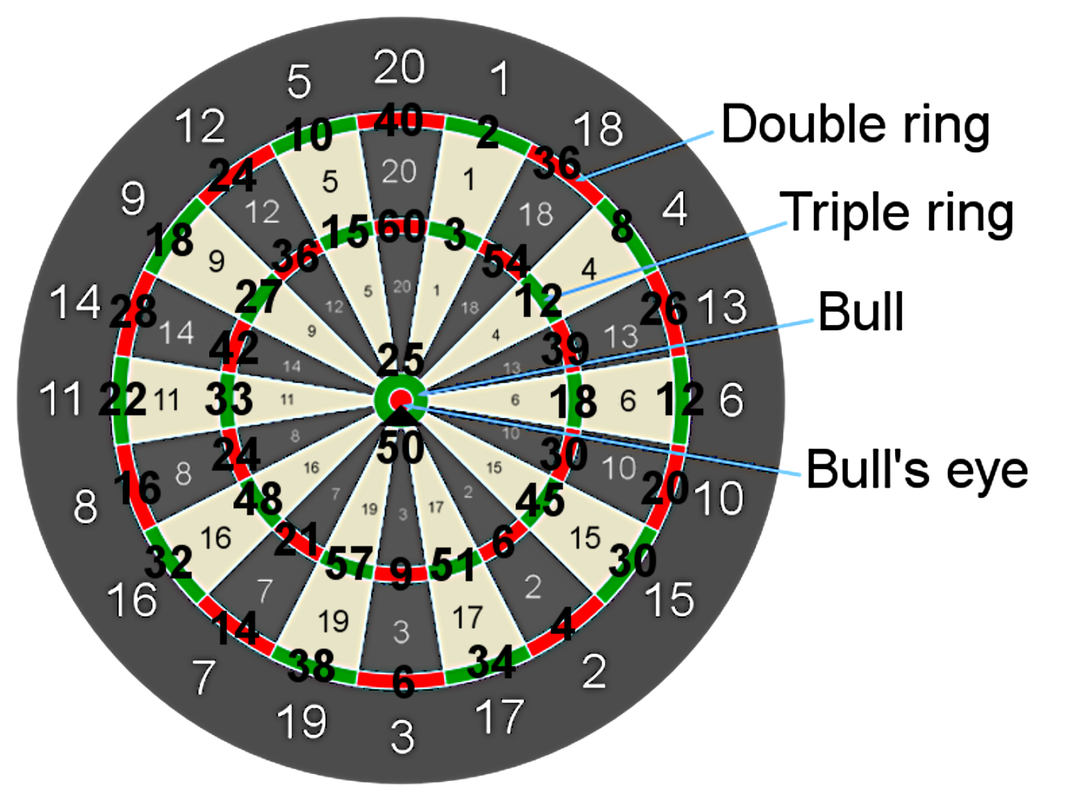 Strangely, the bullseye is not the highest value on the board. As you can see, several spaces on the “triple ring” are actually worth more.

The Good: A Simple Game That Stays On Target

Darts is nothing if not straightforward - throw the darts, hit the target, score the points. Done. It requires very little setup and the rules can be explained in minutes. A playthrough of Darts may not be some deep emotional experience, but it is a fun way to kill some time with your friends. It’s a casual beer-and-pretzels kind of game (which should come as no surprise, given that it’s often played in bars).

Honestly, Darts is so simple and to the point that there’s not much else to say here. There’s not much plot to speak of, the characters are whoever you want them to be, and the setting is so familiar that you feel like the game could take place just about anywhere. It’s not fancy, it’s not pretentious, it’s a quick and easy game that’s not trying to be anything more than that. Darts is a breath of fresh air in an industry that sometimes gets flooded with overblown attempts to be deep, epic, and artsy. 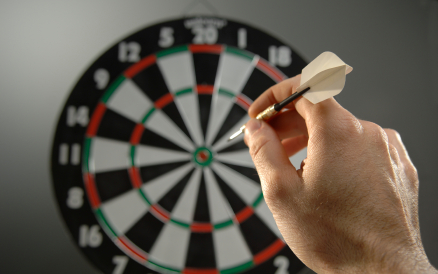 Unfortunately, Darts suffers badly from what you might call artificial difficulty. That is, while the game itself is easy to understand and play, the UI and controls are very clumsy and make it much harder than it should be (think Superman 64 or the original Castlevania). Aiming three darts for the same spot might result in one hitting the target, one hitting a completely different place, and one missing the dartboard completely. Our last game of Cricket ended up dragging on until we literally ran out of rounds to play, simply because nobody could manage to hit the bullseye and end it. The good news is that I won that game by having the highest score when time ran out, but it’s ridiculous that the controls were so bad as to make the game literally unfinishable.

It also defeats the purpose of the more thought-intensive variants of Darts, as forming any kind of strategy is almost impossible when you can’t trust the darts to go anywhere near what you’re aiming at. This alone turns any variety of Darts into a game of luck rather than one of strategy or planning. 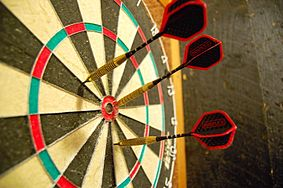 One of these was actually aimed at the person standing next to me.

So Close To A Bullseye

I want to like this game. Darts has a lot of good things going for it: The simple and easy-to-follow plot, the relatable characters, and the casual atmosphere all combine to create what should be a great game. Sadly, it’s almost completely ruined by the fact that it’s nearly impossible to play with the current controls. If they could iron out that one problem, I’d have no issues recommending Darts to any of my friends who are looking for a quick, simple game to enjoy.

Has anyone out there had a chance to play this one yet? What were your experiences? Have any of you found a workaround, or maybe a mod to fix the targeting glitch? Leave us a comment, or drop us a line on Facebook and let me know!

Bars are expensive! If you like what we’re doing here at Sprites and Dice, please consider donating a dollar or two to our Patreon so that we can continue researching the latest and greatest bar games.