A Frozen Treat for Board Game Night 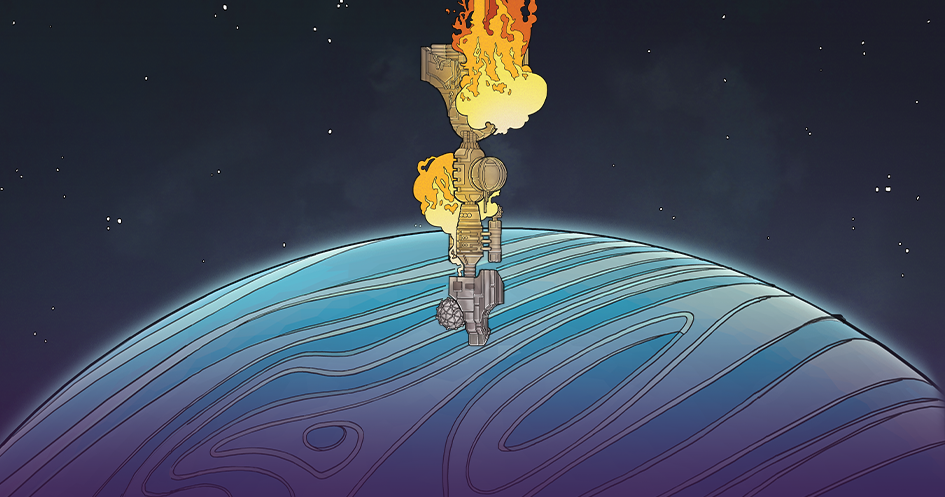 When a mission goes wrong and your colony ship crashes onto an inhospitable alien planet, the survivors of course do the logical thing: split up into factions to fight over the scraps. As a play, you are in command of one of those factions, and it’s your duty to see that as many of your people as possible reach the nearby caves so they can start building a new society.

On the surface (no pun intended) Cryo seems like a pretty typical worker placement game, but you’ll soon find that it’s got a couple of other genres blended in for some unexpected flavors that work surprisingly well. Combine that with a sense of impending doom, and you have a very interesting board game on your hands.

Cryo has a lot of different parts, but it’s actually pretty easy to play. Each player has three drones, and those drones are how you do just about everything. Each turn, you can either deploy one of your drones to use an action on the main board, or you can recall all of your drones to gain resources you've set up on your player board through previous turns. It's only one action you take a turn, but it feels very strategic thanks to the variety of actions possible. 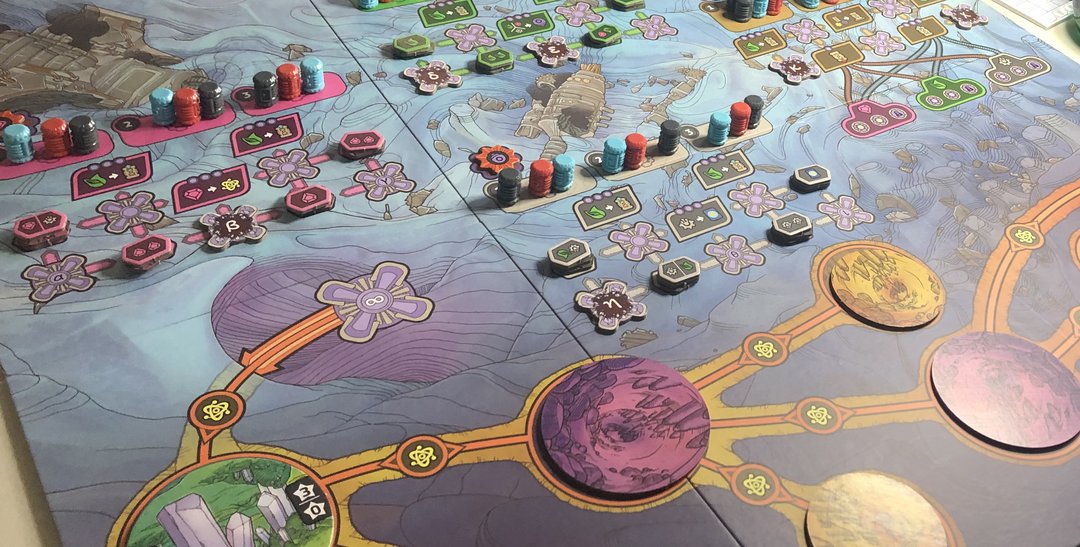 There's a lot to do before the sun sets: explore caves, rescue crew, set up supply lines... better get to it!

It’s a simple yet satisfying gameplay loop, and there’s enough variety to keep things interesting. You need to gather resources to power your ability to explore the caves, draw and play cards to gain access to ships, and of course, rescue your cryo tubes from ship wreckage before it explodes... hopefully faster than your opponents do.

Of course, never forget that your ultimate goal is to get your people into the caves—but, getting them there is costly in energy and resources. So, as with most eurogames, you won’t have quite enough time to do everything you want to do; you’ll need to decide when it’s time to stop building up and start actually scoring points. 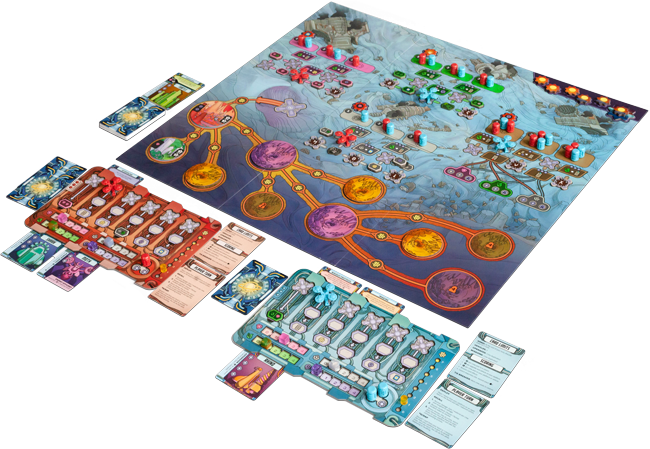 Speaking of time, Cryo’s game clock comes in the form of tokens: Each time a player recalls drones, that player also takes a token, signifying time passing and the planet surface becoming uninhabitable. Once the last token gets taken, the game ends. That also means that players can force the endgame sooner by recalling their drones before they’re all deployed—it’s not the most efficient tactic, but throwing a wrench in your opponents’ plans may be worth it.

Cryo has a few things that set it apart from your typical worker placement game.

The first thing Cryo does differently is that it includes a deck of cards, which are secretly the most valuable resource in the game. These cards can be played as transport ships, player powers, secret objectives, or—in a pinch—scrapped for some other resources. It's a great touch that every card in the deck feels really good to draw, as no matter what strategy you are persuing, each card has four different values you can use towards your own ends.

The second difference is that Cryo has a very bare-bones engine builder mechanic, so you can give yourself a little extra push. As you play, you’ll be able to program some actions into your player board, which you can then activate when you recall your drones. These actions generally involve either drawing cards or swapping out resources, and yet again lets the game give you more player agency. Yes, everyone's the same when you first start a game, but only two turns in and you'll start seeing how someone is hoarding energy to explore the caves, or how another player is building an engine to always have access to food to wake up all of their cryo pods. 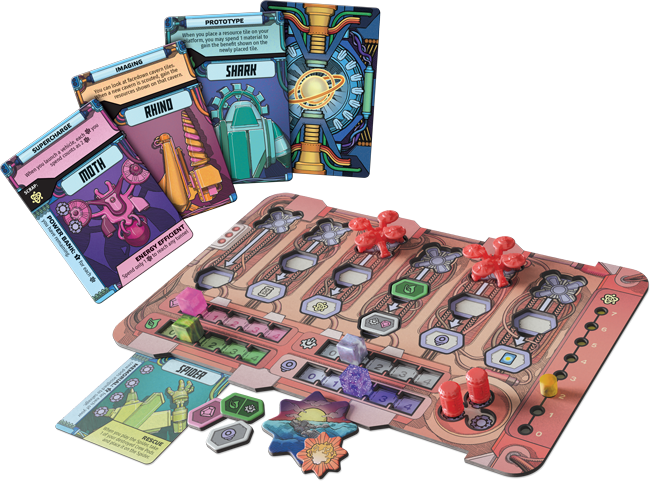 With a little luck, you can set up some really useful combos very quickly.

Finally, there’s a little bit of player interaction; not much, but just enough that you can mess up your opponents’ plans (or vice versa). You can block the spaces other players want by claiming them first, nab the tokens you think they’re going for, and destroy some of their cryo tubes before they rescue them.

Of course, that also means there’s the chance to paint a target on your back. In the last game we played, we tried to avoid being mean to each other until the time tokens forced me to blow up part of the ship. Adam and Wyatt watched in horror as some of their unopened cryo tubes were lost forever. I was then officially “that guy” for the rest of the game... but what was I supposed to do, choose a chamber with my own colonists on it? Sorry friends, but Steve in cryo stasis comes before friendship. 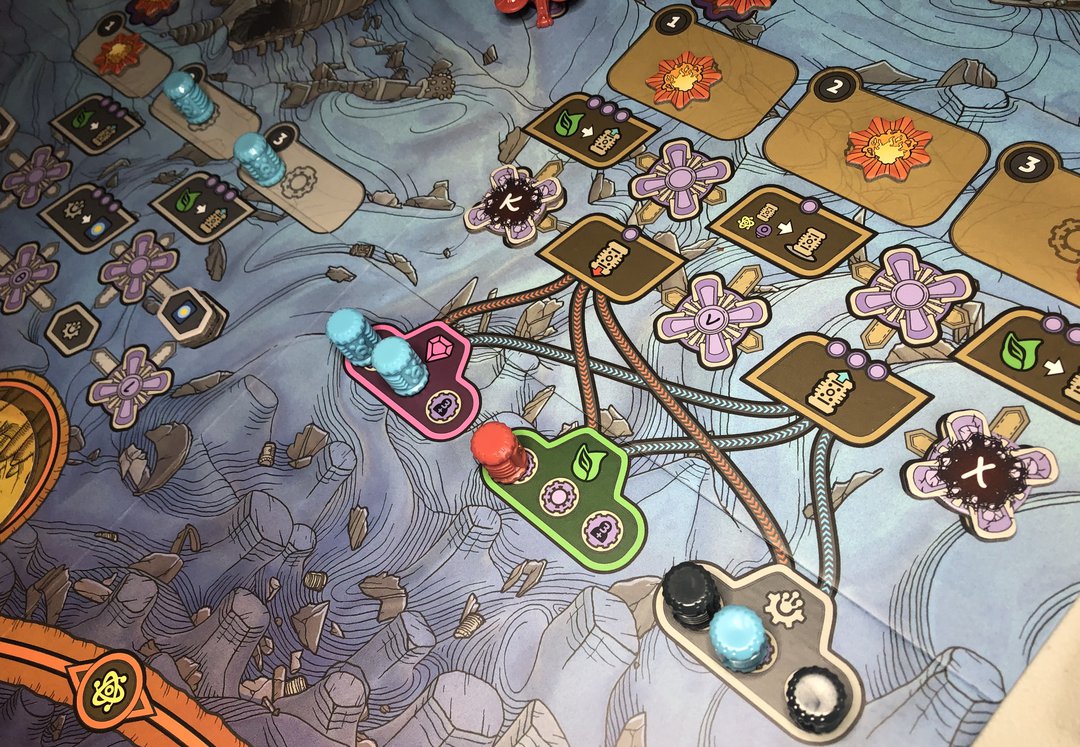 See those explosion tokens over parts of the ship? Those represent us players blowing up any goodwill we had towards each other. At least I saved Steve!

So while I would describe this as a worker placement game, I’d really have to call it “worker placement but…” Much like Renegade’s West Kingdom series, Cryo puts a few of its own twists on the genre to keep things fresh.

Since its release, Cryo has become one of our go-to games when the Sprites and Dice staff has a chance to get together. It’s quick enough to learn, a solid variety of mechanics, and manages to pressure players to keep the game moving rapidly towards the finish line. What you end up with is a game that’s more than the sum of its parts.

One word of warning though: Cryo is a great game, but it's little too complicated to be a good gateway game because it blends so many elements together. A worker placement game like Lords of Waterdeep is a little more straightforward, so I'd suggest teaching that first, or just another gateway game first like Settlers of Catan. With that being said, Cryo is a great game with a little something for everyone. Have fun surviving on an alien planet, and remember: blow up your friend's stasis pods at your own peril.