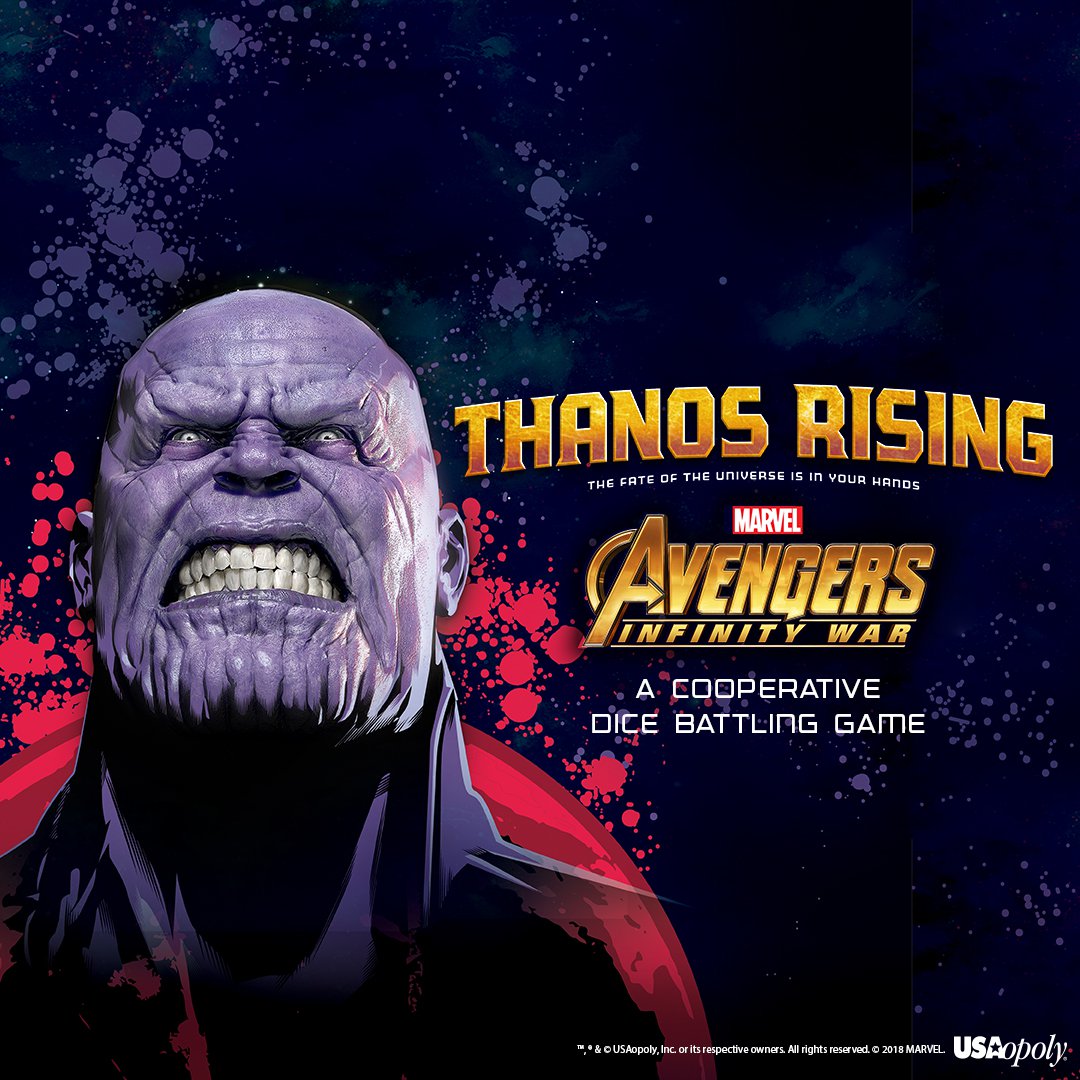 Thanos Rising is not a game that I, nor any of us at Sprites and Dice, would ever have picked out on our own. It looked like something that had been churned out as a way to squeeze some money out of the hugely popular Avengers franchise, and left to our own devices it would have stayed on the shelf forever.

We were at a game day at one of our local gaming stores, and one of the other gamers there wanted to play. So, not really knowing what to expect, we took it off the demo shelf and gave it a try. We were all pleasantly surprised by what we found. 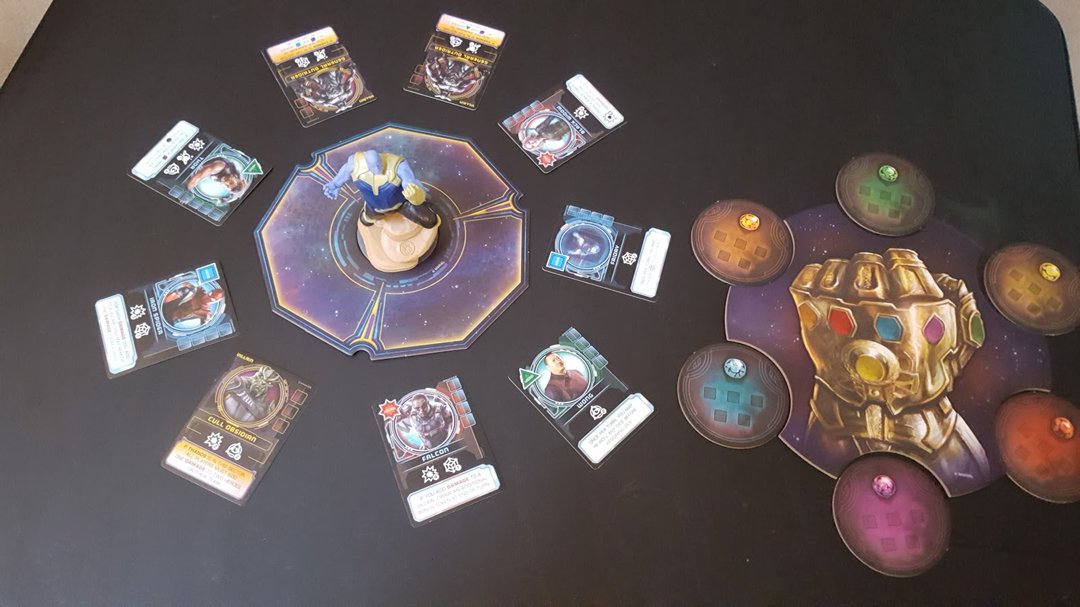 For starters, it just looks good on the table.

So, what is Thanos Rising? It might be best to start with what it isn’t. It is most definitely not some rules-heavy, super-crunchy strategy game, so be aware of that before you pick it up. Contrary to my assumptions, it isn’t some hastily-made cash grab either. It’s actually thought out quite well. However, it most certainly isn’t easy; in fact, it borders on unfair. Thanos Rising isn’t quite as unbalanced as B-Sieged, but be prepared to lose your first several games, even playing with their recommended “easy” rules for beginners.

What Thanos Rising is, is a cooperative dice-rolling, team-building slugfest.

Thanos Rising, first and foremost, thrives on its theme. A nine inch tall Thanos figure towers over the game, mercilessly smacking down the waves of heroes that step up to face him. The Infinity Gauntlet relentlessly builds up toward your defeat as Thanos collects the six Infinity Stones. Meanwhile, you and your allies desperately try to defeat Thanos’s minions before he kills too many heroes or completes the Gauntlet.

If you’ve seen Infinity War, it’s a pretty good interpretation of what happens to the heroes who stand up to Thanos. 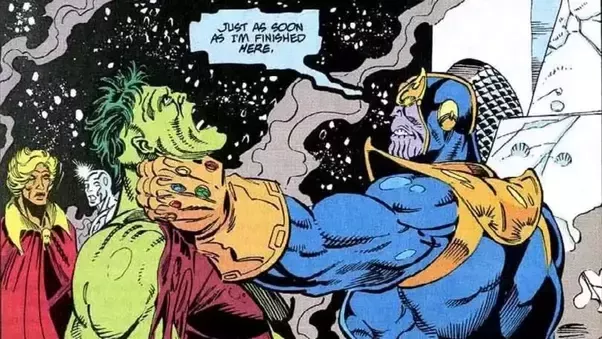 Actual photograph of our last game.

There are four factions that players can choose from: The Avengers, Guardians of the Galaxy, Wakandans, and Magicians. They’re very similar, but have slight tweaks to their dice pools that make them better at different things, as well as different faction abilities. Each also starts with one hero to lead it: The Avengers get Captain America, the Guardians get Gamora, the Wakandans get Black Panther, and the Magicians get Dr. Strange. Each of those heroes gets a benefit from having another hero of a particular type on the team, so your first goal is nearly always to snatch up a hero that will give them that bonus.

Turns are fast and simple. The turn player chooses a section of the board to deploy to, then rolls for Thanos’s action. Thanos will always attack one of the three sections and progress toward at least one Infinity Stone. Once that is resolved, the player will roll his/her dice, assign at least one of the dice toward recruiting a hero or attacking a villain, and reroll the others. Repeat until all of the dice have been used (or forfeited, if there is no place to put them), then pass the turn to the next player. With a maximum of four players, that means that players shouldn’t have to wait more than a few minutes for their turn to come back around.

Thanos Rising is definitely heavy on luck in the early game, but you can accomplish what you want fairly reliably after the first round or two. There are two ways the randomness is mitigated: hero abilities, many of which either increase your dice pool or let you change the results of your roll, and bonus tokens, which you get for damaging villains. The bonus tokens have various effects, but many of them either let the active player roll more dice or simply add symbols to the results. The bonus tokens are very helpful, as they can be played at any time. I couldn’t tell you how many heroes we’ve saved by using bonus tokens to heal them at the moment they should have died.

You'll get to see all your favorite characters! And watch them die at the hands of Thanos!

A Couple Of Major Flaws

As you may have already gathered, Thanos Rising’s reliance on card flips and dice rolls means that there is a lot that’s left to chance. I’ve found the game on the whole to be surprisingly well balanced, with a good ratio of heroes to villains and victory usually within sight, if not actually achieved, but there’s always the chance that fate could simply turn against you. I remember one unfortunate game where, of the ten villains in the deck, we flipped five within the first few turns.

My other gripe with this game is that it feels like you don’t have a chance to fully utilize the team-building aspect of it. This issue comes down to a single rule which states that you cannot hit the same villain more than once in a turn (not counting special abilities that deal damage). Since most of the villains aren’t particularly hard to hit, and you can’t stack damage no matter how good your roll is, there’s no point in building up an amazing team to fight them.

With all of the various heroes in the game, some of which have really cool abilities, we’ve still found that your best bet is often just recruiting one extra hero to trigger your leader’s ability, then going to knock some villain heads. I would really like to see a variant where that rule is removed, but it would likely require the entire game to be rebalanced. 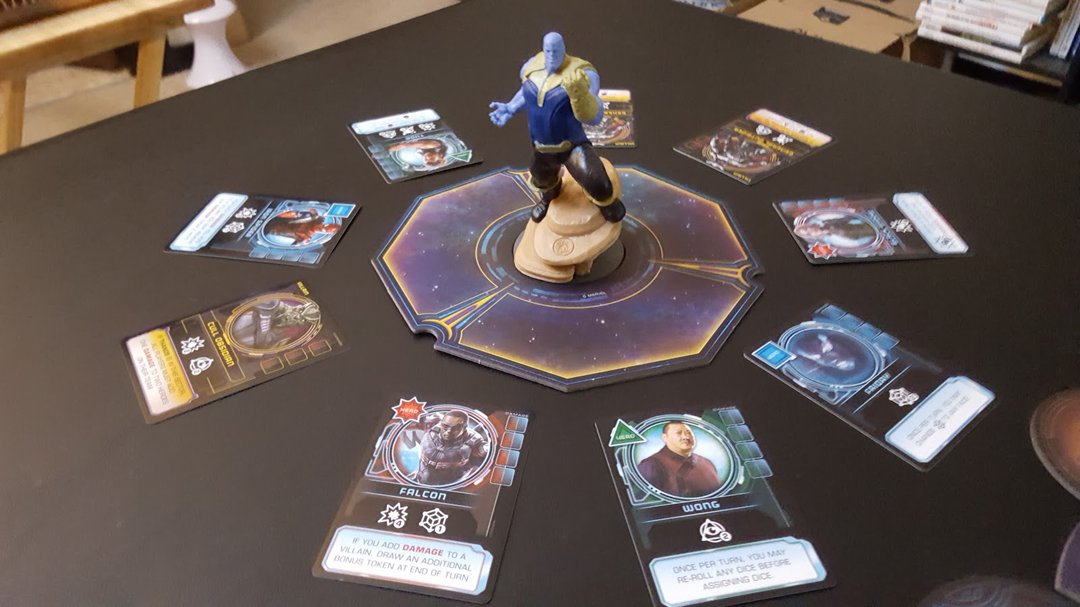