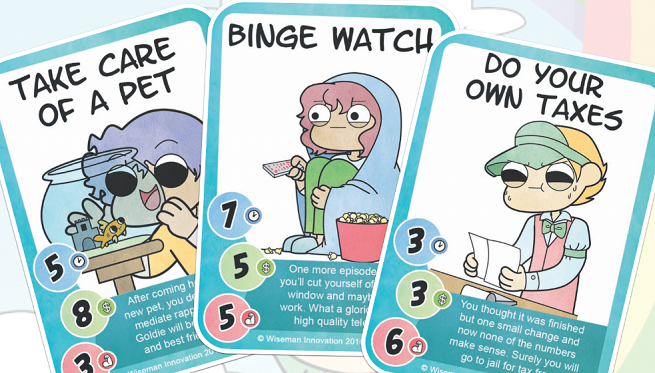 Have you ever felt a little worn down by daily life, and wonder if you are alone in your struggles? Fear not, dear reader, for this game was made to remind you and your friends that there are many people out there that find the humdrum of modern life not only stressful, but funny as well.

The Premise: Your Anxieties On Display

Pretending To Grownup is simple in concept and quick to learn, which is to its benefit. The goal of the game is to get to twelve points - something you accomplish by 'squabbling'. On your turn, you can play one card face down from your hand, and declare that you are the better with time, money, or energy than anyone else at the table. The player to your right has a chance to 'counter-squabble', where they play a card facedown as well. This lets the next player have a chance to place a card as well, until the squabbling ends up where it started. Everyone reveals their cards, and the highest score (between 1 and 9) keeps all the earned cards as points.

This is a bluffing game at its heart, but there are a few things which make things complicated enough to stay interesting. On your turn, you can choose to instead of squabbling 'take on more responsibilities', to draw more cards in your hand, growing your pool of cards. The other action you can do is 'daydream', which lets you take the wooden dinosaur unicorn from the center of the table. While this puts you in possession of a very cute looking meeple, it's more important function is to give all of your cards a +1 effect during squabbling. Quickly, the game becomes a series of quick choices - when should you bluff, or when should you use other actions to improve your chances of winning? After all, with four players, winning a full four-way fight means you have already gotten a third of the points towards winning. 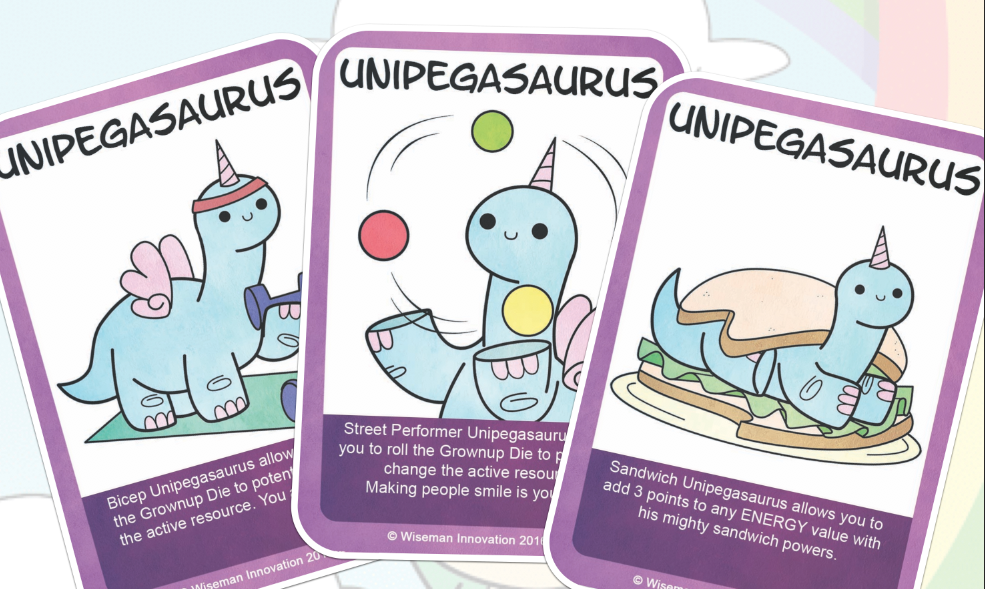 These purple wild cards make a chaotic game even stranger. The fun of Pretending To Grownup isn't in winning however, but in comparing which cards are played to try and win.

Finally, to add some more randomness to the game are the unipegasaurus cards: cards which work as card modifiers, or ways to add chaos to the standard proceedings. This odd fantastical creature is meant to illustrate the whimsy of childhood brightening your day, and so a sandwich unipegasaurus might add 3 points to the energy score of your 'do your own taxes card', letting you steal a win.

You can see how this game gets slightly ridiculous.

The Good: A Fun Filled Chance At Catharsis

To be completely frank, this game was a winner out the game because of its theme alone. For me, it strikes the right note of humor; Pretending To Grownup references plenty of actual life events with a sense of sarcastic wit, but the tone of the card art and gameplay lets you break out the game in mixed company.

Pretending To Grownup works well for what it is. At its core, this is a game about calling people’s bluff, while still having enough strategy in when to use particular cards or actions to make it feel like its own distinct game. It plays incredibly fast, with games ending typically within twenty minutes, even at a full four players who are engaging in side jokes and table talk. This isn't a bad thing at all - I am of the mindset that there is a board game for every season, and this particular game I find works well in two particular roles: closing out a night with friends, or working as an icebreaker to greet others. The colorful card art and loud laughs attracts people over, and soon after a round or two of this game, I find complete strangers suddenly a lot more willing to sit down and play a round of a heavier game like Dragoon or Pandemic right after. 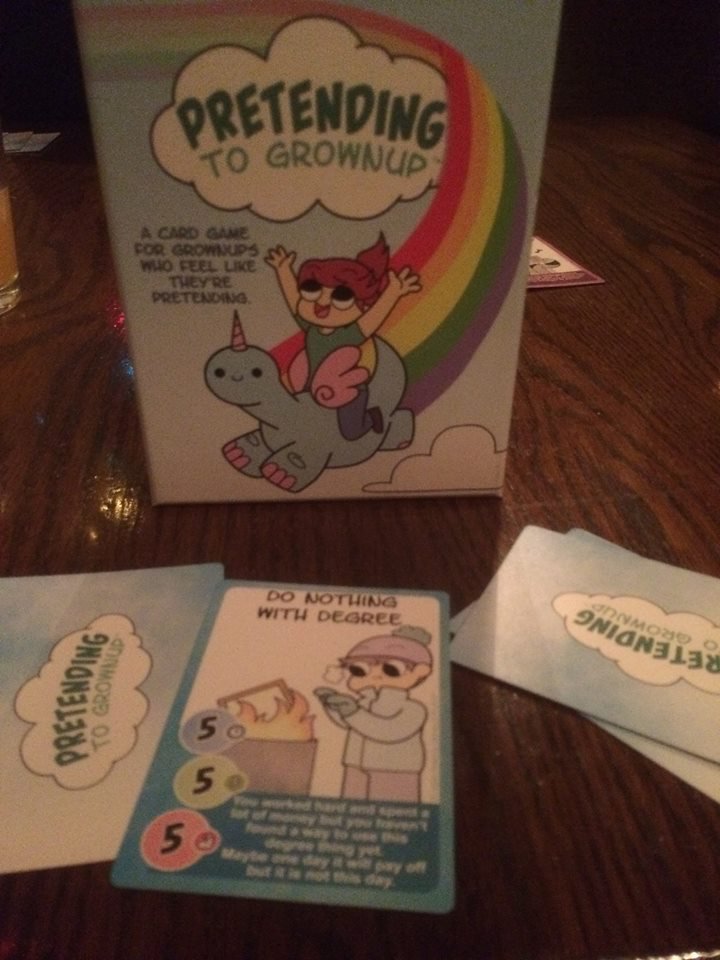 As someone who graduated with an English Literature major, this is perhaps my favorite card to win with.

This game is completely playable as a game simply based on the points listed on the cards, but Pretending To Grownup only truly comes to life when you take a chance to read out your own cards, both to see the fantastic artwork by Meghan Mckay, and how its used to show normal situations as something epic. It is very common to have one of your opponents burst out laughing while it is your turn, and that's because they have just taken the time to see what's written on their own cards. My favorite rounds of this game are when participants start shouting out the names of their cards as they reveal them. Nothing gets people curious in what you are doing more than someone shouting "Oh yeah? Well I have more time than you because I'm skipping a dentist visit!".

The Bad: Every Gamer Need Not Apply

If there is a downside to Pretending To Grownup, it is that its scope of interest can be very limited. Just as this game is at its best when being played by a bunch of just-graduated college students, it might fall flat for anyone who is very much outside of that age group. While I have had a blast playing it as a 30-something, I can’t imagine most people above fifty enjoying the game’s humor. In fact, this game should be played by people who enjoy table talk and side conversations during games, who like talking about what cards are in their hand. This isn't a game about winning or losing, so much as it is about the crazy squabbles that can happen. To that end, this is a game that is a fantastic purchase, but only if you have groups of friends that like games which don't take themselves too seriously, or if you have a public gathering place to bring games to.

The other limitation to this game is the player count; if you are used to party games which are made to seat five, six, ten, or even more people, then Pretending To Grownup has a player limit that would be disapointing. The box says that only 2-4 players can play at a time. While you can in fact add more players, keep in mind that if one player wins a six-way squabble, then they have already won half the game. You can certainly change how many points it takes to win the game to make room for more players, but the original box doesn't offer those ideas. Again, this game needs the right size crowd, and the right people to really make an impact.

Pretending To Grownup Is A Great Alternative Party Game

For a lot of people, Cards against Humanity, Superfight, and Joking Hazard style games are the pinnacle of party games. Many people can get involved, there’s plenty of loud debate and laughs, and this style of 'debate' party game is very accessible. However, for my own tastes, I have found Pretending To Grownup to be a party game I enjoy a whole lot more. After a day of teaching longer games at a bar event, or just after a long day at the office, this is a game I don't have to be patient for. Games are typically over in under 30 minutes, even while teaching the game, and I have gotten more than my fair share of belly laughs when players take time to read their cards; sometimes, I've seen people purposefully lose a round just to showcase a particularly fun piece of artwork that they had in their hand. 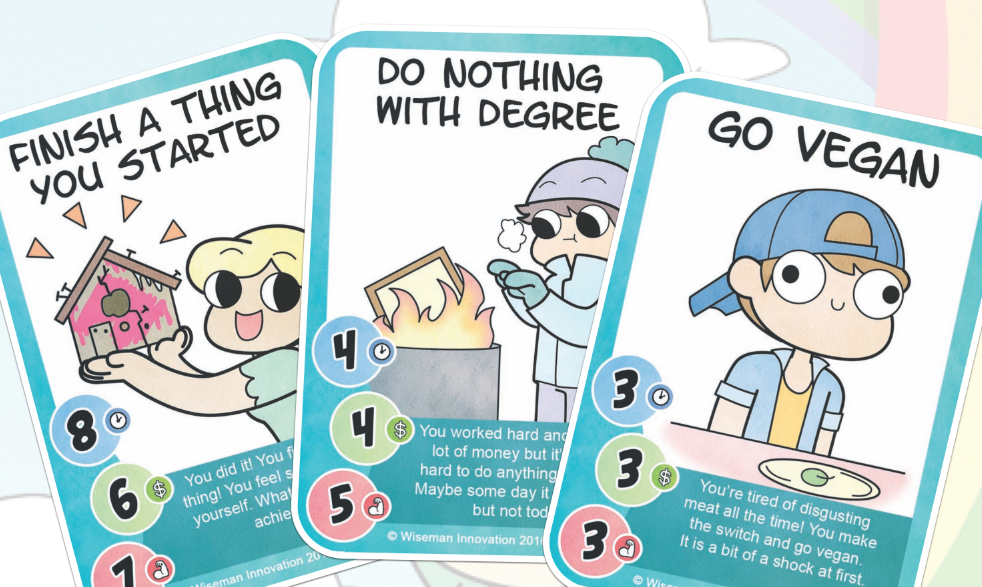 To this point, I have played this game with over a dozen people, and more than half immediately demanded a chance to play another round. It's a game meant to let us laugh at our daily struggles, and in my experience, everyone that has played with me has done just that. If you are looking for a game that is lighter in mechanics but no less fun, Pretending To Grownup is the right choice for you.