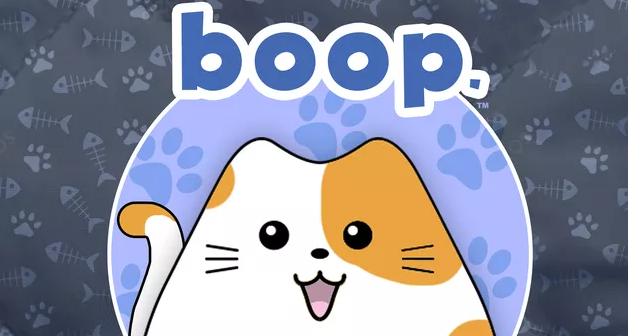 We’re back from PAX Unplugged and let me tell you, cute little animals are big in board gaming this year. For example, Tabletop Tycoon was pushing hard for Everdell, which recently got two new expansions. Root is, of course, a perennial favorite, and Leder Games was showing off the new Marauder Expansion at the convention (...adorable, right?).

And now from Smirk & Dagger Games (or more accurately, from their newer imprint Smirk & Laughter Games), we have Boop: A game where players compete to see whose cats are better at jumping on the bed. 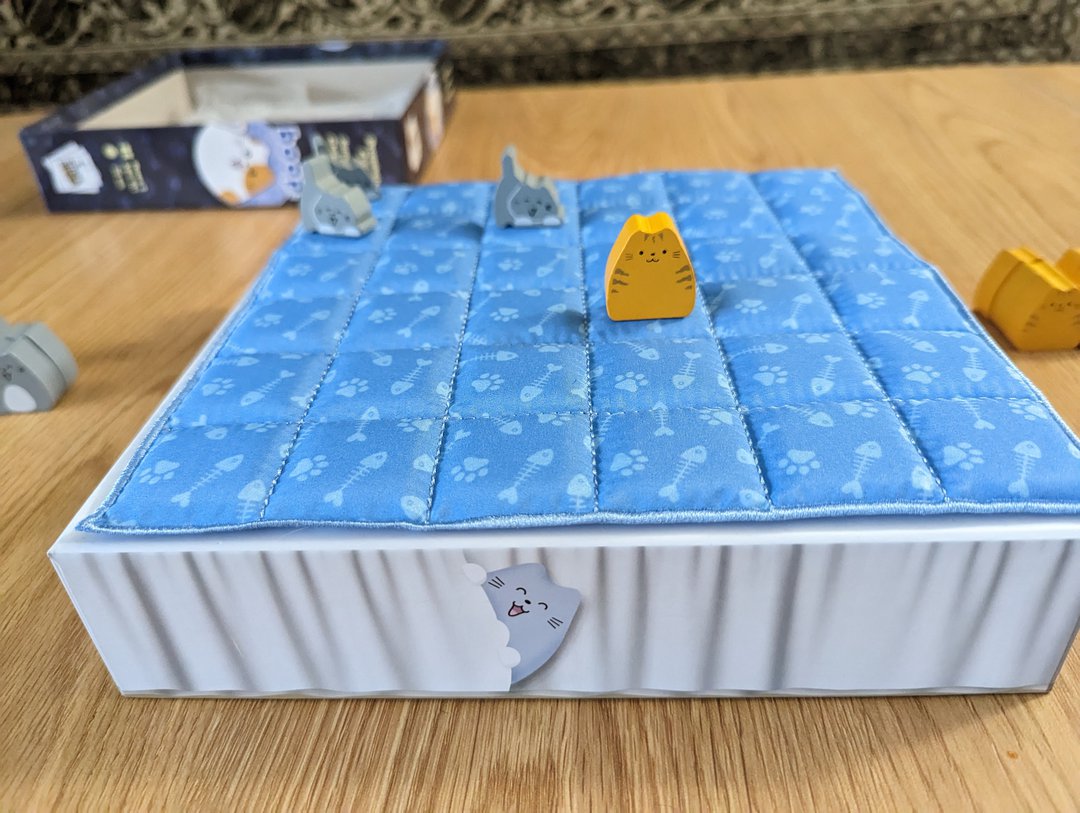 Using the box as a bedframe is optional, but adorable.

We don’t normally do full rules writeups in these reviews, but Boop is so simple that just explaining the gameplay covers most of the rules anyway.

It's incredibly simple, but there’s a bit of heckery involved in Boop, because each piece that gets played "boops" (knocks away) any pieces adjacent to it. Also, any cat or kitten that gets booped off the bed returns to its controller’s pool to be replayed—don’t worry, cats always land on their feet!

There are two exceptions to the boop rule. First, the pieces block each others’ movement, so if there’s another piece behind the one getting booped, it doesn’t move. Second, kittens cannot boop adult cats because the adults are too chonky (technical term).

And that’s basically it! That's the game. 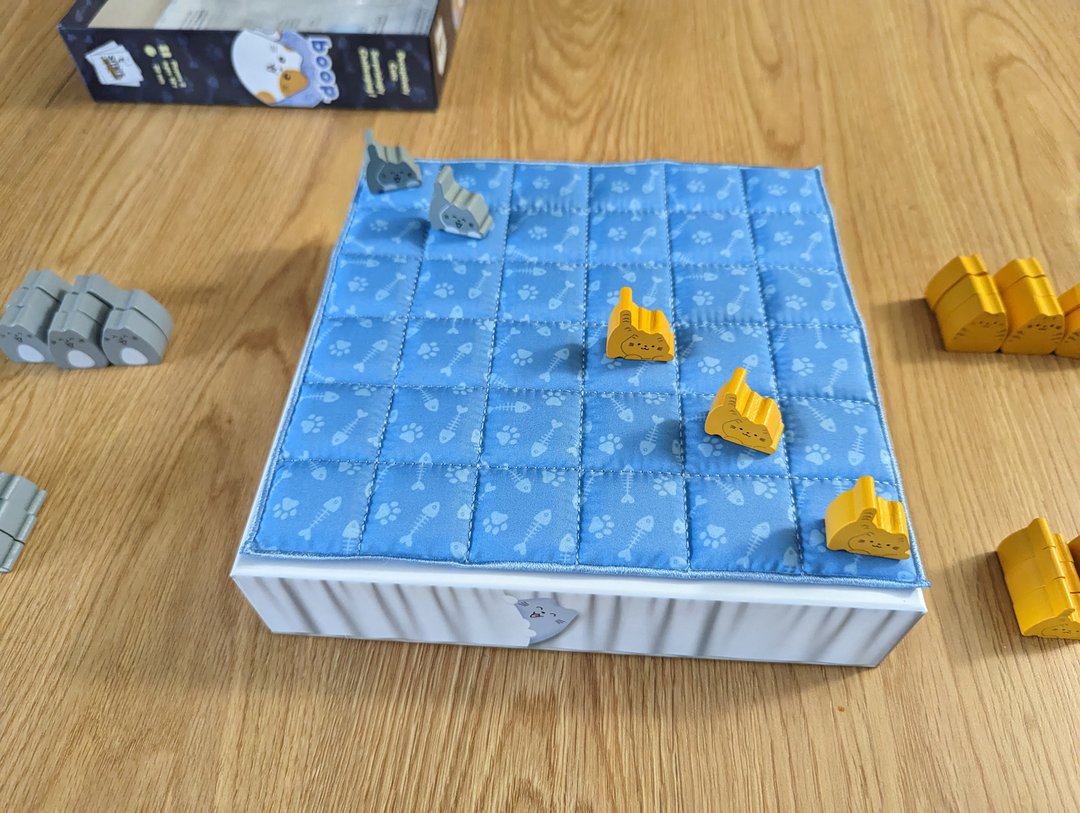 These orange kittens are about to run off and give their player three adult cats. 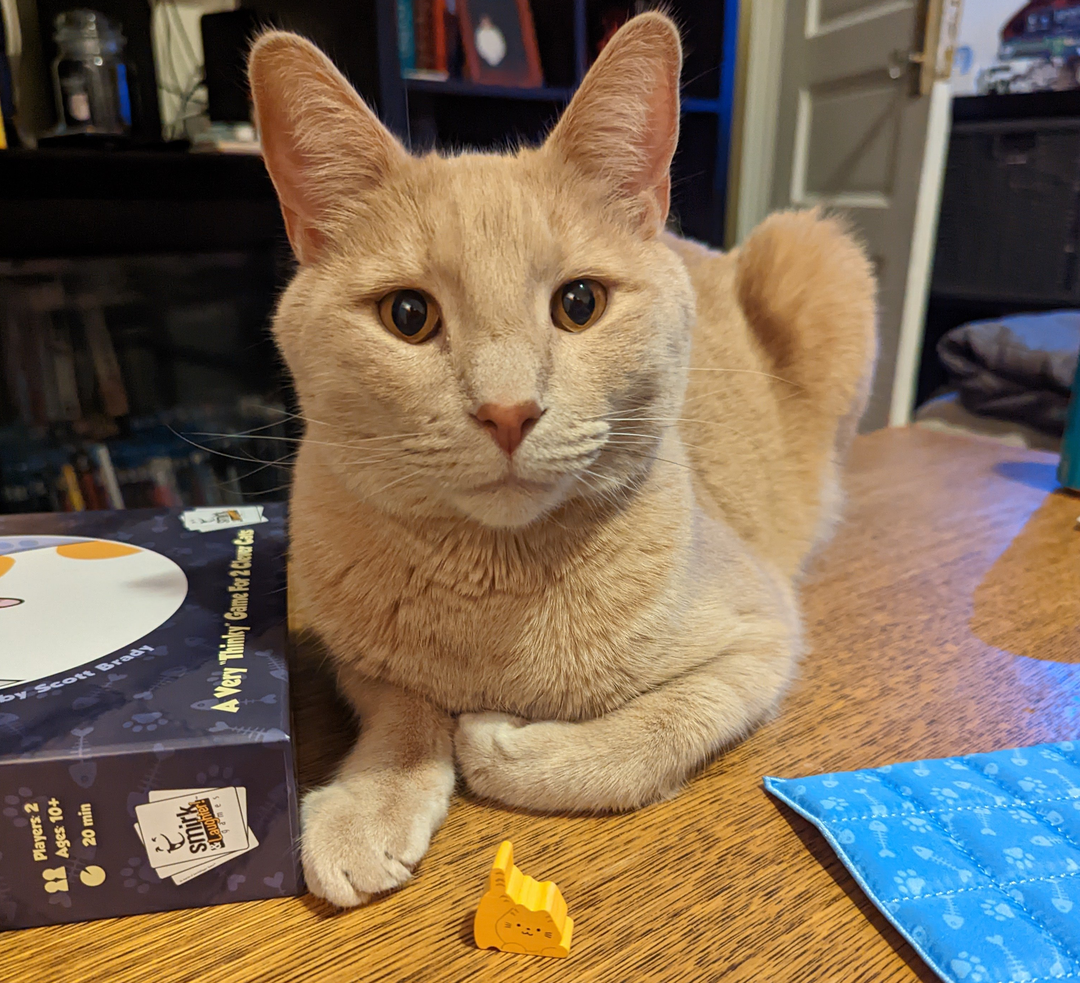 So, Boop is a quick, simple, and adorable little game about cats playing on the bed. Now what if I told you that it’s actually a challenging contest of strategy?

You’ll get about three turns into Boop before you realize that this game is way harder than you thought. First of all, you can’t just line up your cats willy-nilly, since you’ll boop yourself out of position. Second, it’s extremely easy to disrupt your opponents’ plans and scatter their cats (and for them to do the same to you). This means that not only do you have to plan ahead effectively, you also have to trick your opponent into thinking that you’re planning something else. 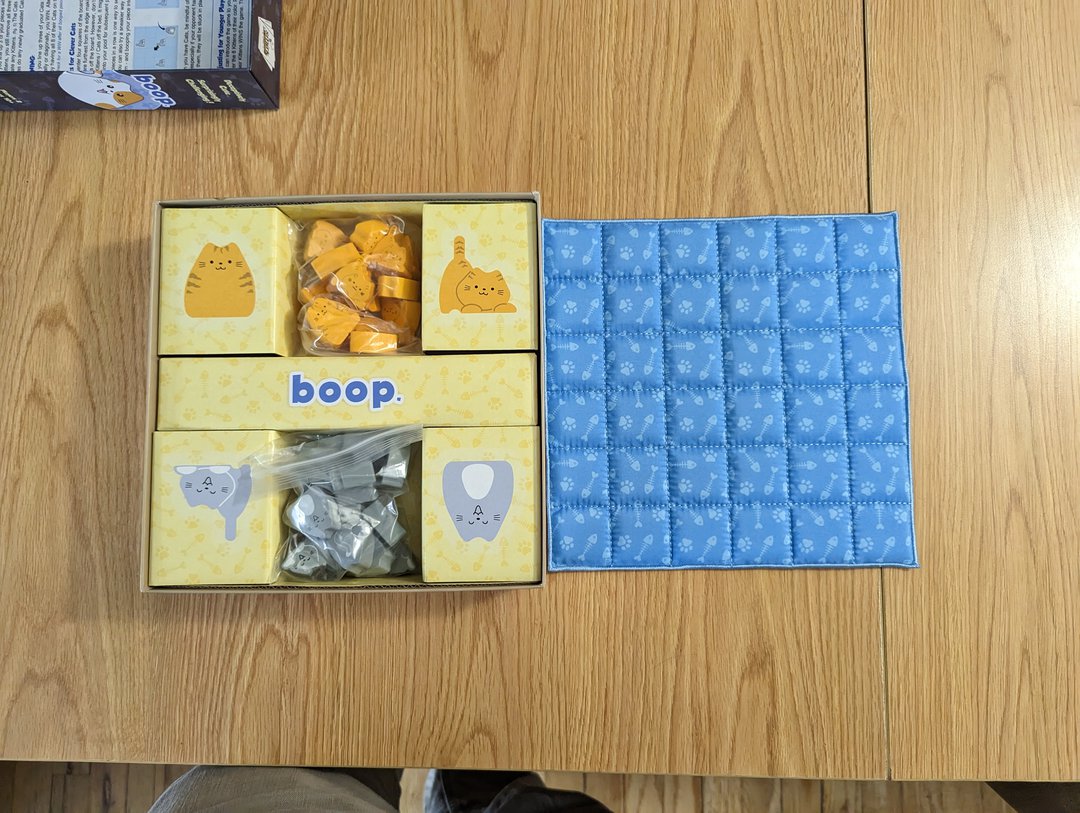 This is it, this is the whole game.

It doesn’t quite run into the same problem as Tic-tac-toe where neither player can win, though you certainly could dance around each other for a long time. Eventually—by dumb luck if not strategic skill—somebody will either get booped into a winning position, or run out of adult cats and lose the ability to break up the winning combo. In fact, although the gameplay is closer to Tic-tac-toe, Boop reminds me a lot of Checkers: deceptively simple rules hiding surprisingly deep strategies. It's incredibly easy to pick up, but will allow for players who are used to more complex games still get a mental work out trying to out maneuver the other. 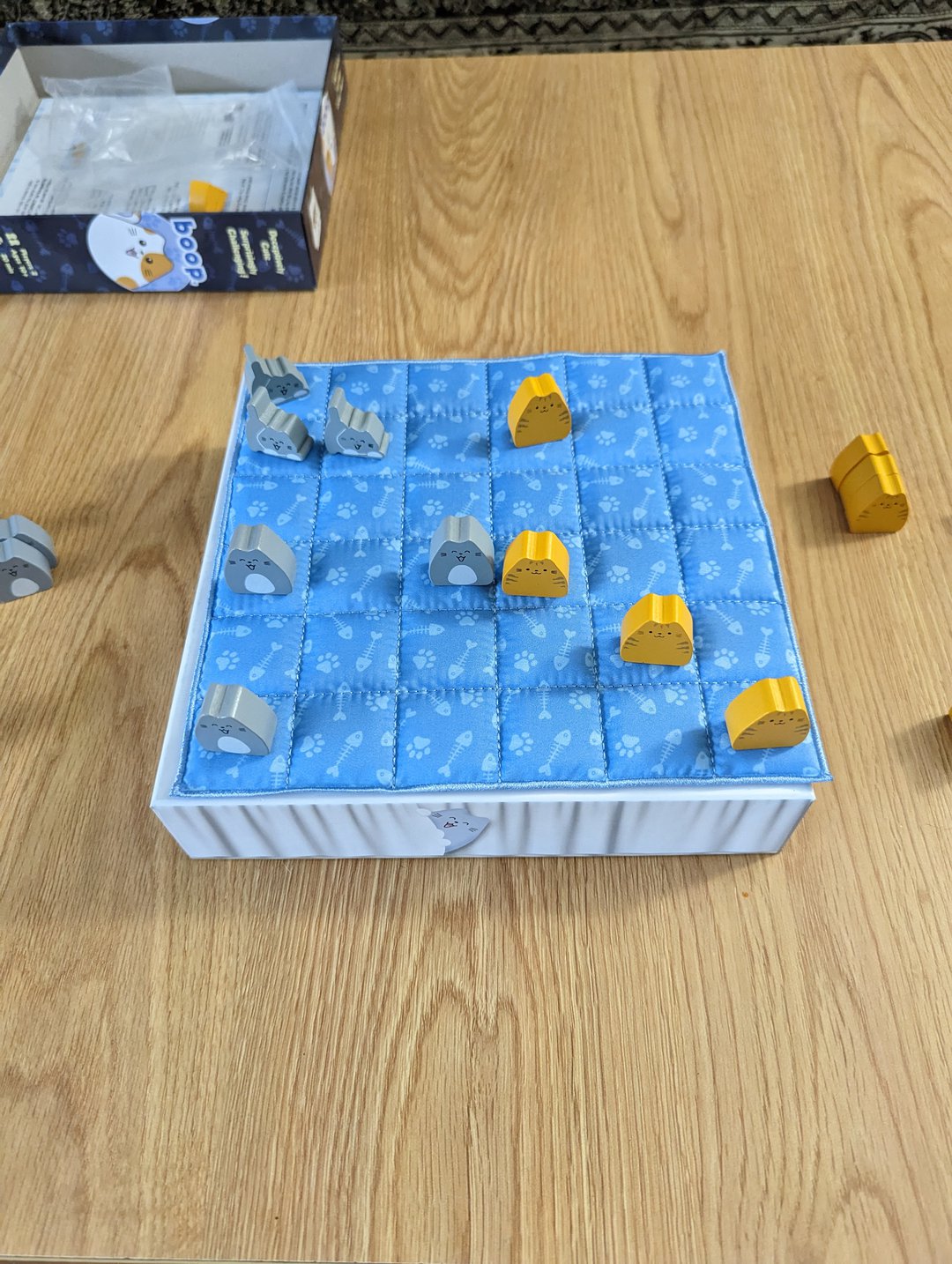 Orange wins! Who says orange cats only have one brain cell?

Come for the Cats, Stay for the Strats

Boop would appeal to a surprising range of gamers. Casual players and kids can enjoy a quick, cute game about cats jumping on the bed, while more serious strategists can try to crack the best ways to get all their ducks—uh, cats—in a row. Overall, with a relatively low retail price of $34.99, this would be a good purchase for anyone looking for a light and fun game for casual game nights, or a good palate-cleanser between longer games.

If you’re still on the fence, I highly recommend trying Boop at least once if you get the chance. It’s short enough that a demo game isn’t much of a time commitment, and you might find yourself as pleasantly surprised by it as I was.