My Favorite Game at Gen Con 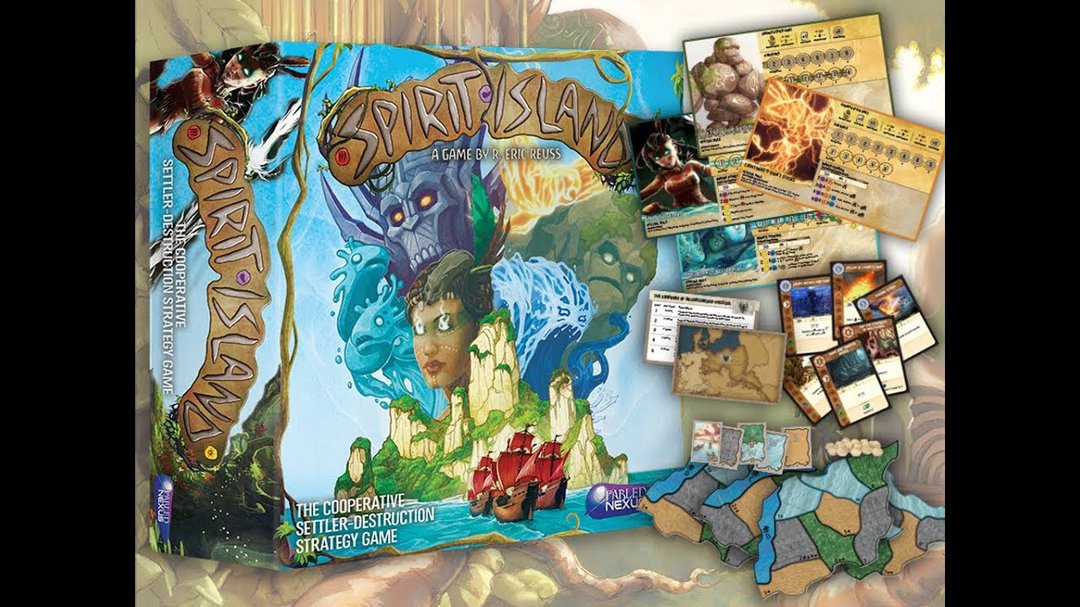 Once upon a time, at Gen Con 2016, I was looking to kill twenty minutes in between interview appointments. Exploring the side rooms off the main convention hall is always a gamble, but you’re never going to walk away bored. Tucked underneath the escalator leading to the second floor was the Greater Than Games room, hosting several games. One fellow called out to me and introduced himself as the designer of Spirit Island. R. Eric Reuss happily led me through the concept of Spirit Island and as I played with the glued together, hand annotated prototype, I found myself deeply engaged with the game.

For something that boiled down to a random chance meeting, I felt like it was somehow unfair for a game to be as fun as Spirit Island was. I had spent a LOT of time demoing other prototype games in the First Exposure hall on the other side of the convention that year, and most of the games there were varying degrees of diamond in the rough. Some more rough than others. After only four rounds playing the spirit of lightning and storms with my friend and Reuss, I wanted to know if I could take home a copy. Sadly they didn’t have any copies for sale because the Kickstarter backers had the first priority. After that encounter I sort of filed Spirit Island away in the back of my head under “Noteworthy Games” for future reference.

Well now it’s the future, and I was able to grab a VERY hotly contested copy of Spirit Island and the expansion Branch and Claw. Sadly, I wasn’t able to meet Reuss at Gen Con 2017 and congratulate him on a game well made, but I don’t think he needs me to tell him that he did a stellar job here. 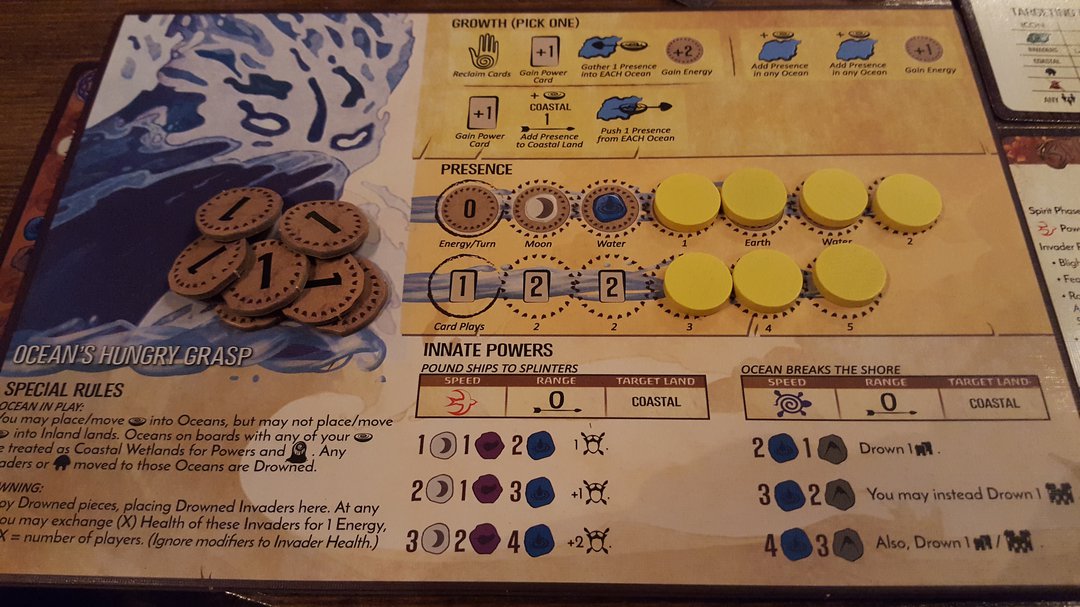 Ocean's Hungry Grasp, the spirit of the waves who resides around the coasts. The playerboards are thick cardstock and feature amazing art. Player skills are easily referenced mid-game.

Game Concept: The Spirits Move In Air And Shadow

Boasting a variably complex game with lots of moving parts, Spirit Island is a delight to play. The main goal of the game is simple: total destruction of the invaders seeking to tame the unconquered wilds of the island. You can play cooperatively with up to 4 players, and the whole experience scales elegantly so you can play solo if that fancies you. Having played with two, three, and four players I am very impressed that the game flows naturally no matter how many people are participating. With a total of 8 spirits to play every game feels different as the combination of unique powers and play styles mesh together to create different strategies.

The Invaders operate on an mechanic that is both predictable and threatens to overwhelm, so the players can move to prevent the worst of the damage but are never really able to completely lock out the enemy from impacting the board state. As the Invaders move inexorably across the island and the damage to nature piles up in the form of Blight, the spirits generate Fear in the hearts of the enemy that both hinders the Invader’s progress and makes winning easier for the players. It’s an incredibly elegant design choice that has the players fighting back to gain rewards while visibly showing the end of the game approaching. Each individual piece of game design present in Spirit Island adds up to produce a Swiss watch of a game, ticking along in synchronicity that is both challenging and addictive.

I really like Spirit Island. I really, really do. However, I think it is worth noting that this game is pretty intense, mentally. After playing easily a dozen hours over the weekend, I can say that I’m left feeling drained after marathon play sessions. While not as sprawling as Twilight Imperium or complicated as Kingdom Death: Monster (note: I love and regularly play both of these games), Spirit Island is meaty, with loads of individual pieces to manipulate and gameplay steps in each turn. This isn’t a beer and pretzels game, and it’s a game that requires the commitment of an hour or more per session to enjoy. File it firmly in the medium Euro rating on the board game heaviness scale. This is not a detraction, but rather an observation for prospective purchasers. 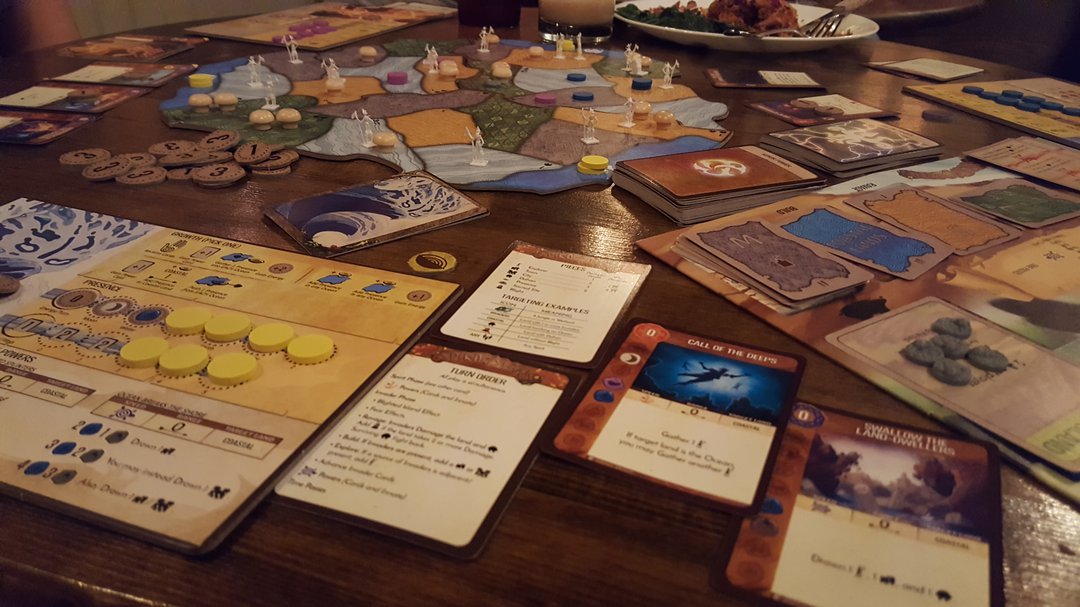 When the "all coastline" card shows up, WAY TOO MANY EXPLORERS decide it's time to go sightseeing! Each one of them is capable of establishing towns.

The Good: Tales Told By Firelight

One of the most glowing things I can say about Spirit Island is that the design and mechanics support the narrative and flavor of the game. I constantly complain to my friends (much to their consternation) about the gulf between a game’s mechanics and the narrative it is trying to push. When I look at the rules in a tabletop RPG or video game, I find myself asking, “Why is this mechanic the way it is? It works against the story they are trying to tell.” My philosophy is that mechanics should dovetail with the story, and if a rule doesn’t actively help in that regard, it should be excised like a tumor.

Every spirit plays differently using the same general set of overarching rules. Each fits within its own archetype, pursues its own goals, and most importantly FEELS like a powerful spirit. The River spirit flows out and controls the island, the Ocean spirit moves with the tides, the spirit of Stone starts off slowly but develops into a hugely powerful rolling boulder, Lightning strikes fast and far. It is hard to explain without really getting into the gritty minutiae of the mechanics, but it all feels very right. There is a tension right out of the gate as the invaders move in, spreading quickly and blighting the land and its natives, and that never really lets up even as each spirit grows in power and solidifies its hold on the island. Victory never seems to be fully assured, and almost all the games I have played had the players balancing on a narrow beam trying to lose slower than the invaders. The game is very deterministic, and even though the players don’t have control over the card pulls, event effects, or invader spawns, you can see everything coming. My friend described it as a fun puzzle where you can still feel the panic and approaching disaster.

There is another positive side effect of the game being very complex: because each spirit has a lot going on and many things to focus on, a group of mechanically savvy players should be able to avoid the “alpha player problem” where one person is calling all the shots. In order to play well, you need to focus on your own tools, and I have found the game plays best when everyone collaborates on attacking problematic zones of the island. Spirit Island is just busy as hell and everyone needs to take care of their own niche, but by working together the players can achieve really great synergistic combos. 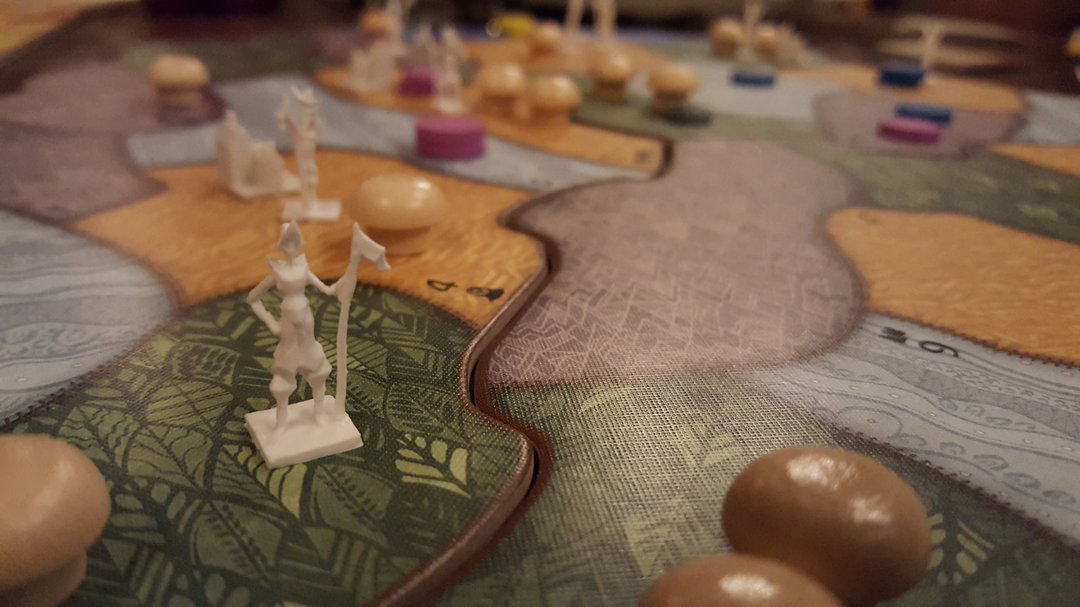 Unless you can dodge lightning bolts, steer clear of the coasts, and conquer horrible nightmares, you're not claiming this forest today!

Cast Bones, Speak Stories: A Game That Scales Well For Everyone

Besides the enchanting design, the delightfully charming art, and the engaging gameplay, the most interesting thing is the modular difficulty scaling. The game supports 4 unique adversaries that invade the island, including the kingdoms of England, France, Sweden, and Prussia. Each of which changes the tempo of the game by modifying the way the enemy acts both before and during play. Each Adversary has 6 listed levels of difficulty that shorten the time needed before the players lose, and also make it harder for them to win. Additionally, there are eight different scenarios that include new win and loss conditions. Scenarios do anything from drastically speeding up the game in “Blitz” to creating a series of campaign style games where the outcome of the first game influences the second. Between the number of available spirits, adversaries, and scenarios, there’s just a ton of ways to play Spirit Island, and that replayability is baked into the core box.

The highest praise that I can offer Spirit Island is that I went out and bought it. I’m pretty stingy with my money, and the time I have to play games is limited. When I keep coming back a game, it’s a sure sign of high quality.

Editor's note from Adam: Hi folks! If you're looking around online for a copy of Spirit Island, you may have noticed it's already going out of stock at many retailers. Amazon still has some copies at the time of writing this, which is where I picked up a copy for myself. There's good news, though. Word from the designer is that Greater Than Games is looking to minimize downtime between print runs and should have another round on shelves by the end of the year. Look for it around the holidays if you aren't able to grab one of the copies currently in the hands of distributors! Also, Greater Than Games has made a limited stock of their two promo spirits available for purchase at their website if you're unable to meet them at a con!

Check out our Gen Con Wrap Up Podcast with myself, Nate, and Wyatt. If you like what we’re doing, follow us on Twitter and check out our pictures of Gen Con. Please consider supporting us on Patreon; that would just be really swell.