Stranded In A Land Of Adventure 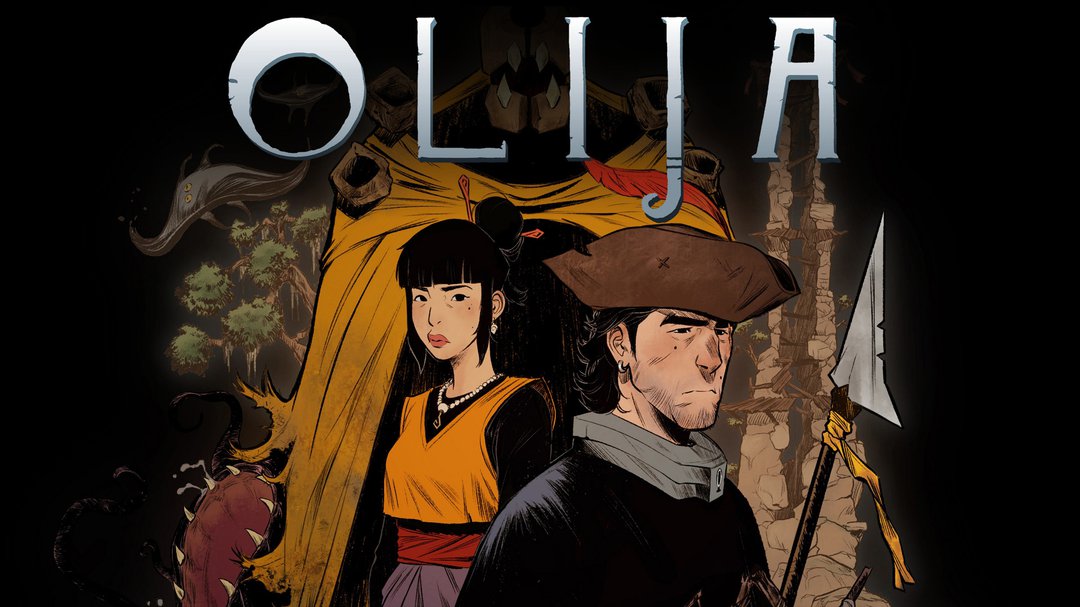 Toss the words “Japanese indie” my way, and you’re sure to make me stop in my tracks. That’s pretty much exactly what happened a couple PAXs ago when I stumbled across Olija. Simple pixels on a screen sporting a simple premise: the hero wields a magical harpoon that he not only fights with but also executes all manner of teleport and dash moves. Puzzles and fights alike were engaging and fluid, the gameplay was crisp, and I was hooked. Fast forward two years later, and Devolver Digital has published yet another hit, fantastical and fresh.

I went into Olija expecting that same, smooth gameplay I’d remembered from nearly two years ago. What I found was that and so much more. Let’s have a look, shall we?

The Hero, A Captain With No Ship

Faraday is a penniless lord, we come to learn in the game’s opening scene, and though he loves his home and his people he cannot bear their suffering any longer. He takes to the sea with a crew of men from his town, presumably to bring home treasure or food to uplift them. What he finds is anything but. When the ship is broken in a great storm, Faraday finds himself washed up in a strange land, Terraphage, fighting for his survival, that of his men, and for a way out of the land that holds him captive.

But the fabled, possibly cursed, weapon isn’t quick to take the stage with Faraday. While the graphics, functional in their intentionally blocky, pixelated look, get the job done of setting the scene, and you grow accustomed to Faraday’s unarmed combat, an unexpected narrative quickly centers itself, driving the plot. Cutscenes surface, creatures flush from the foliage in the foreground, a creepy cave looms as you move into the darkness. Something in a deep voice rumbles. Did it say Faraday’s name? All the while, the tension builds. Something is off about these islands and it’s only a matter of time until you find it. Or it finds you. 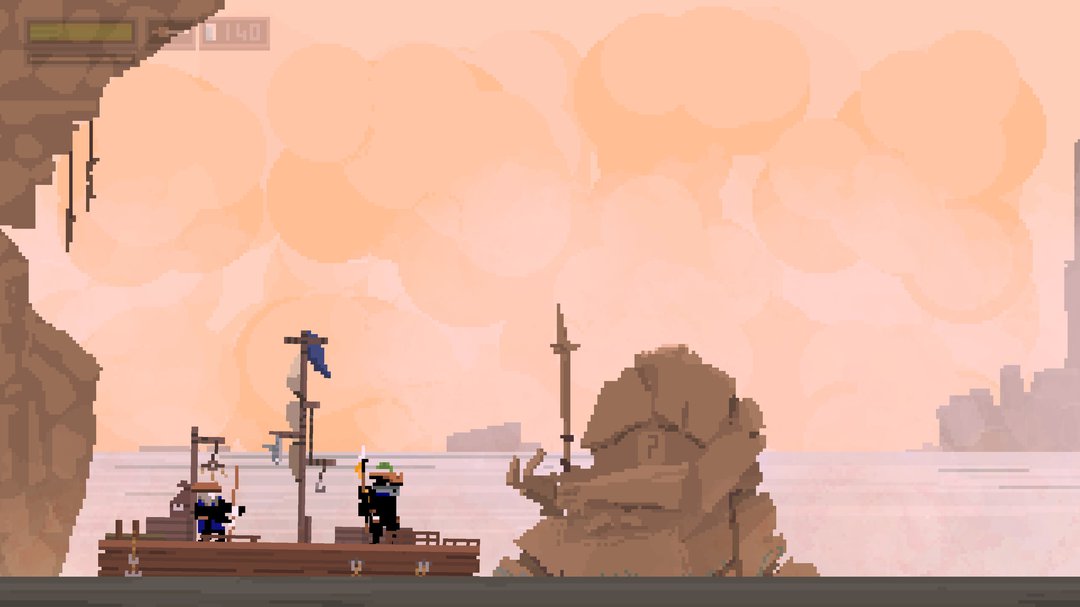 You and the boatman are going to get real used to each other. He'll be seeing you off on each new branch of your exploration.

While I’m sure the look of the game, pretty in pixels, will be the first thing most folks notice, the true star goes to the sound design. Credit where credit is due, the visuals do a fair job of setting atmosphere in your travels, but the music and sound effects are what take these into the stratosphere! I cannot state this enough: the sound effects in this game are fantastic and the music is absolutely top notch! Atmospheric, heart pounding, and thoughtful, all when needed. The music is a mix of orchestrated pieces and lilting guitar, depending on the mood, which set the scene from tense and exciting, to mysterious, to sad and somber. The sound effects as well add that little bit of embellishment, from the cries of enemies to sounds more sinister. This game’s got a blockier resolution to its pixels than many more modern pixelated titles, and yet I never felt this game was wanting to express its character, in no small part to the music and sound.

The environments themselves tell stories, as well. Question everything you see and you will be rewarded. Why is there suddenly a library in the cave you’re in? Why is Olija dressed differently from the other people you’ve found? What about how you found her? Paying attention to small details in the environments can give you clues as to the story as it progresses. The game doesn’t do much to explain why things are the way they are, save for a flash of scenes at the end of the game, and while progression is still completely linear, it feels good that everything makes sense in context as you continue playing through it. All the while your ears will be rewarded for staying keen on their own. I might even recommend playing this game with a good pair of headphones! 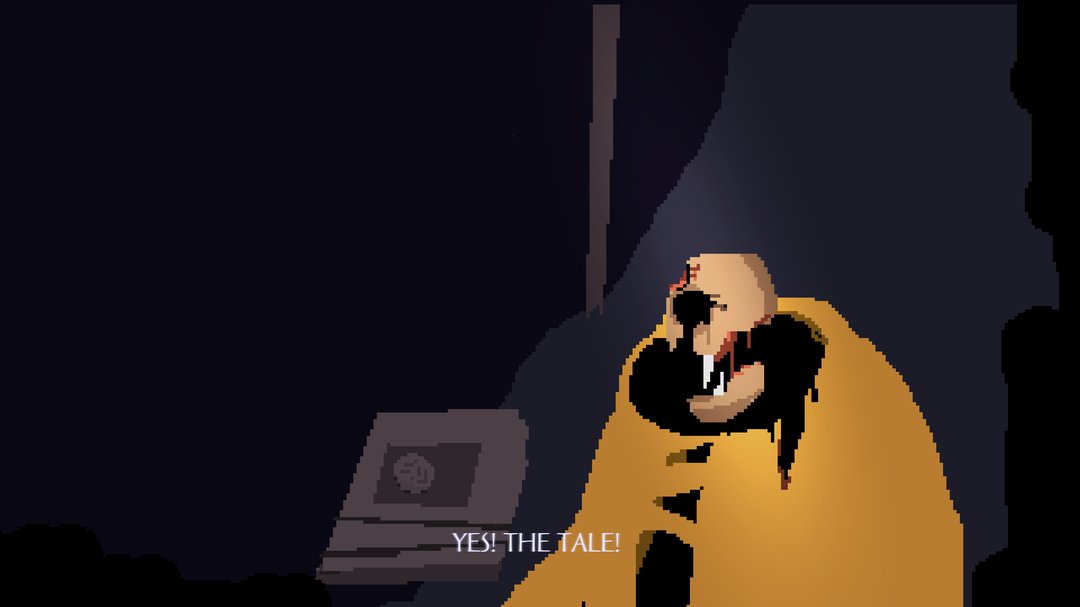 Ol' yellow cloak here is mighty creepy. ESPECIALLY when the sound effects and music kick in!

It’s not all just fantastic music, interesting characters, and intriguing locations that kept me engaged with Olija, though. The core gameplay is snappy, smooth, and feels really good to sling around for the several hours of the game’s story. Honestly, for as simple as the game’s controls are, I’m surprised that there’s as much depth as there is! You have a jump and three different attack buttons at your disposal: one for the harpoon, one for whatever secondary weapon you’re using, and one to throw/recall/teleport with the harpoon. In addition to their normal combo chains, these buttons throw out different attacks when combined with some directions (such as forward or down) or when jumping and falling. It wasn’t long before I was flowing from one enemy to another in combat, embedding my harpoon in a distant foe and using my unarmed attacks to send those nearby flying into walls, finally whizzing back to my harpoon, finishing the final foes with the combo ending slash of my rapier. The system encourages you to get creative, so go wild!

The environments themselves also reward clever gameplay. There are tons of secrets to be had, and the game does a very good job of tickling that lizard part of the brain whenever you find one. Perhaps it’s a little dust cascading off a bridge, down a hole and between suspiciously absent spikes. Perhaps there’s a stream of light coming through a hole in the ceiling. Maybe there are two parallel vines hanging down, creating an upwards corridor, or a “teleport blob” (as I’ve taken to calling them) that indicates a secret will be dropping you back into this area when you’re done with it. The game is a joy to play, so even when the combat gets a little bit samey, I never tired of stringing my own, personal, badass combos together in between snagging secrets and stomping some of the game’s truly thrilling boss fights. And let me say, while I won’t spoil any of the major fights here, they are as thematic and engaging as you’d hope of a game that combines this kind of narrative and atmosphere with solid gameplay. 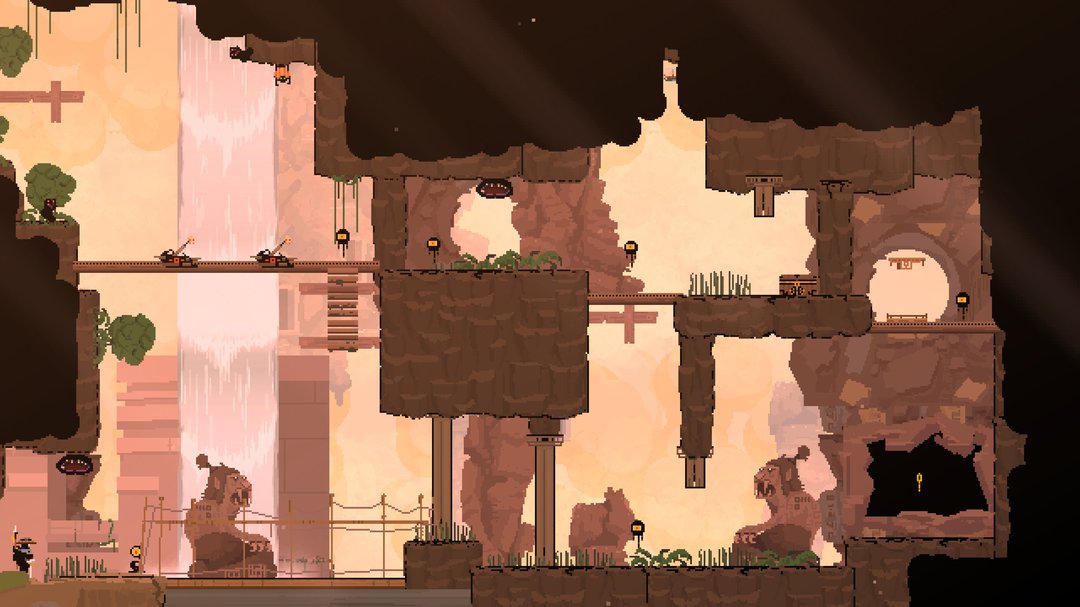 Puzzles in Olija aren't too complex and still satisfying to solve. This here is one of the last ones you'll see before the end fights.

I always try to balance my reviews in saying who a game might not suit best, though I have to say with Olija I have very little to add this time. The game is just so pure in its intent, in the refinement of its gameplay and how it tells its story, that I really have nothing else to say. Any pain points I have with this game are purely superficial and likely a matter of preference for you. Do you care more about the blockier pixel graphics, despite the excellent sound? Do you agonize that, amongst the powerup hats you can purchase, some with magnificent plumed feathers sticking out from them, the one hat that returns health (usually the power I take in any game) looks like a backwards baseball cap? I mean, ok, that’s probably the one thing that bothered me most. Though I will say that at least it forced me to try some other fine hats, which I quite enjoyed.

This game is an adventure from start to finish. If you think it’s your kind of thing, then Olija comes with the highest of recommendations. Like other short-and-sweet Devolver titles I’ve reviewed, such as Carrion or Katana Zero, you’ll probably blast through this game; it’s not particularly hard, and even during boss fights you’ll find the minion enemies drop just enough health items to keep you going during the toughest of spots. But that’s not the point, is it? If it’s just as much about the journey as the destination, and given the adventure this particular journey takes you on, you’ll love every step you take. This game is full of charm, from the quite endearing “stealth” level to some nearly comical music during what should be rather tense fights. This game is truly playful. Why not give it a play for yourself?