Biomass Brings All The Gamers To The Yard 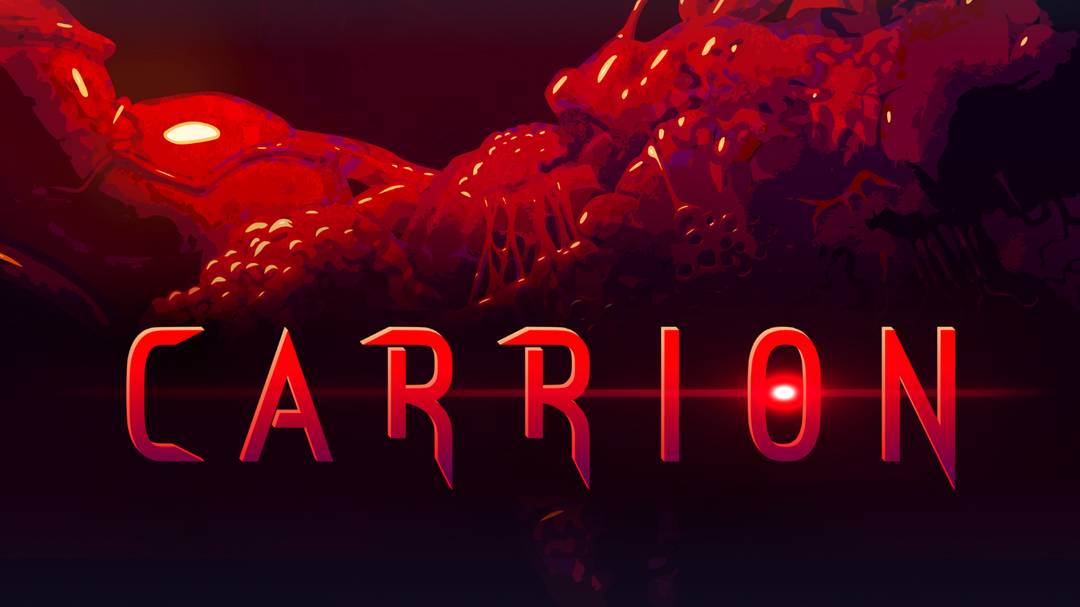 There’s a crash from the next room over. Sounds of groaning metal and shattered glass are replaced by the screams of men and women doing research in the lab, carrying through the vents to your horrified ears. Moments later the power cuts out and the flashing reds of the emergency lighting kick in. A heavy metal door, sealed, thuds dully as a roar claws at the impenetrable barrier. Then it becomes unnaturally quiet. No hum of computers. No chatter from your fellow scientists. You’re only aware of the gentle squishing and the sound of a thousand teeth gnashing from the vents moments before the metal grating is ripped from its frame. 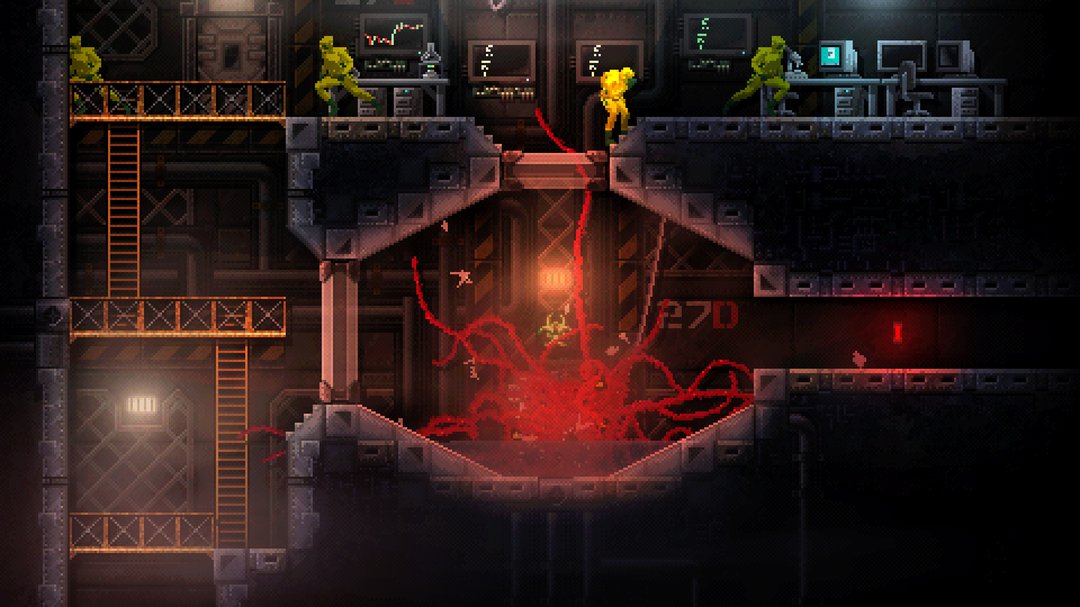 From such humble beginnings we spring!

Welcome to Carrion, a game where you play not the hordes of humans wielding guns, flamethrowers, and power armor, but the monster striking from every angle to take them apart and escape the base that contains you. Let’s have a closer look at this pixelated, carnage-filled thriller!

The Challenge Before You

Carrion is, at heart, a simple puzzle game. A puzzle game that leaves half-eaten bodies lying on the floor and blood on the walls. The easiest way to describe it goes something like this: you, an amorphous creature with a never-ending appetite and mysterious origin, seek nothing more than leaving the humble facility that contains you. You want to get out and experience the fresh air. Long strolls. Inviting everyone out for lunch.

Each set of rooms presents some kind of new challenge. You may find yourself fighting off the tasty humans who try desperately to beat you back with bullets and burning. You might have to pull a set of levers to operate doors too strong to break down. Or you might need to seek out new powers altogether, new tricks opening up new avenues where before you found only dead ends.

Thematically, this game is a total gem! It’s up to you to decide how to approach a room, and there are often multiple avenues. Are you the adaptable creature that disables some automated security measures before fighting? Are you the bloodthirsty monster that rips the door off its hinges and explodes into the room, tentacles tearing at anything in reach? Or are you a predatory stalker, skulking stealthily through the ventilation system, snatching individuals into the darkness when backs are turned? There’s no one right way to devour your foes. Everything’s on the menu. 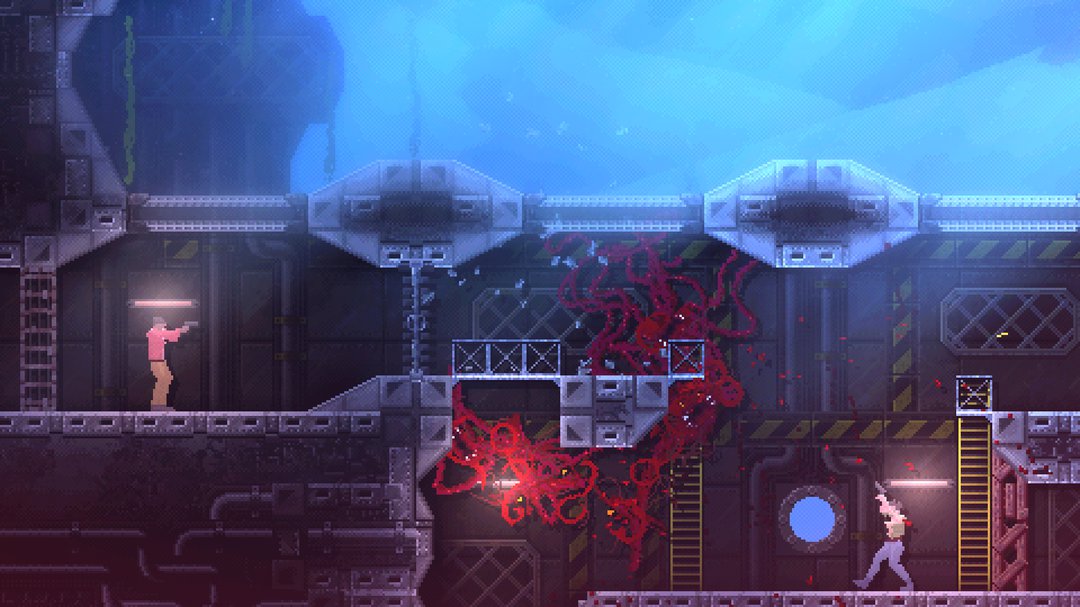 You are the monster!

At the end of the day, it’s all about one word. Biomass. Saving your game depicts you squeezing yourself into holes in the wall, spreading your tendrils across the bricks. Healing yourself by devouring bodies also replenishes your bulk. Certain powers are only available to you depending on your size, and given a proper pool of water you can deposit (or return to re-ingest) glowing orbs of precious biomass. Manipulating and spreading this biomass is what the game’s literally all about. When you’re small, you can slip past lasers undetected and shoot webs to hamper foes or flip distant switches. The medium-sized monster is capable of smashing through some barriers and of course is slightly tankier to damage, having a second health bar. At first I was impressed with just that. A slim, mobile form and a fightier, bulkier one to apply muscle where needed. But it gets better!

There’s a third form, replete with a third bar of health and the ability to lash out with hardened, sharpened spears. You can rip enemies to shreds with this form, along with the ability to simply spear into obstacles and rip them from their moorings. While this form is a little bit harder to control, because there’s so darn much of you slopping and swinging around, you are capable sweeping entire rooms in a fury of raw red carnage. It’s the form I didn’t know I needed! You’ll need to manage your biomass and the advantages of all three forms to work your way past some of the challenges ahead. 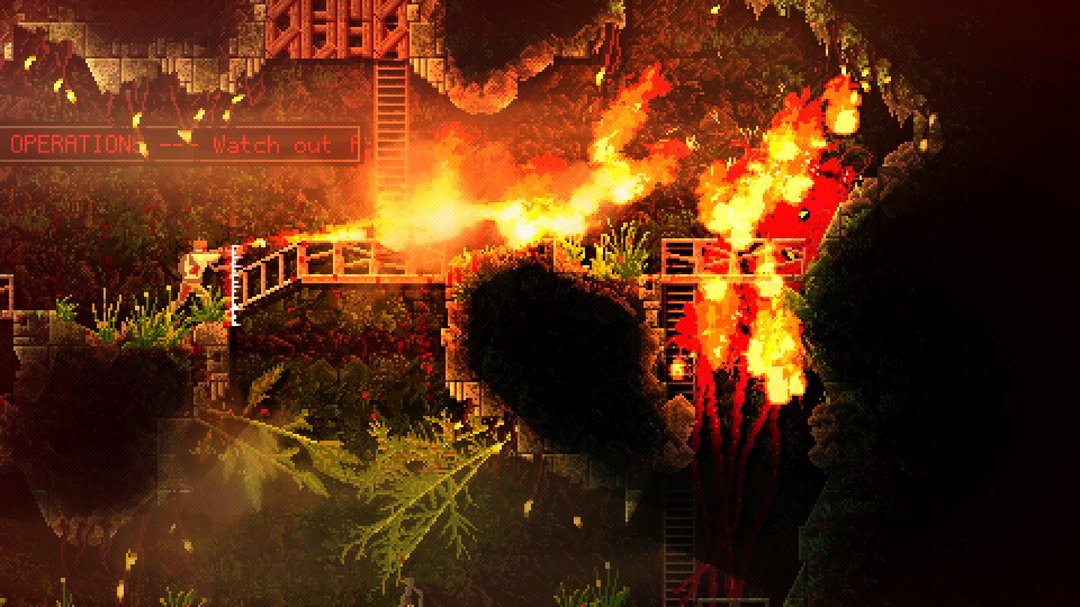 Sometimes flamethrowers make the frontal approach tougher. You can do it, but a little tact goes a long way too!

I often found myself simply choosing the approach to rooms that my form at the time best suited, roleplaying the monster if you will. While, sure, I could have backtracked a screen or two to deposit some biomass (some puzzles will require this), shed some bulk and slipped into the vents for a stealth attack, simply being ten times the size of the humans in the next room was motivation enough to act my appetite. I would rip down doors and vents, charging across the room with spikes shooting in every direction, an absolute mess of squishy red cutting short the screams of everything before me.

Likewise I found myself sometimes small and vulnerable, hiding. A patrol would walk by as I slipped off a metal grating in the ceiling. Quickly a tentacle would shoot out, and as I retreated backwards into the safety of cover, I would drag a body up with me, devouring it, regaining biomass. Once I felt safe enough to take a few hits, I would drop into the room, eagerly latching on to any remaining enemies before turning my attention to the puzzle.

The first time I avoided a fight completely by mind controlling a human and having them turn on their allies (yes you heard that right) it felt like some true alien monster stuff. Needless to say, anytime I got the opportunity to do that in the future, I always did! At every turn, Carrion makes you feel like the apex predator. Ingest, absorb, spread your biomass. Infect. Breach a new section of the base. Spread. Find new powers locked behind tanks bearing radiation symbols. Mutate. Spread. Rip entire walls away and spill into the unknown. Dismantle mechs that stand in your way. Gaze longingly out at what awaits you beyond, so close! Spread. 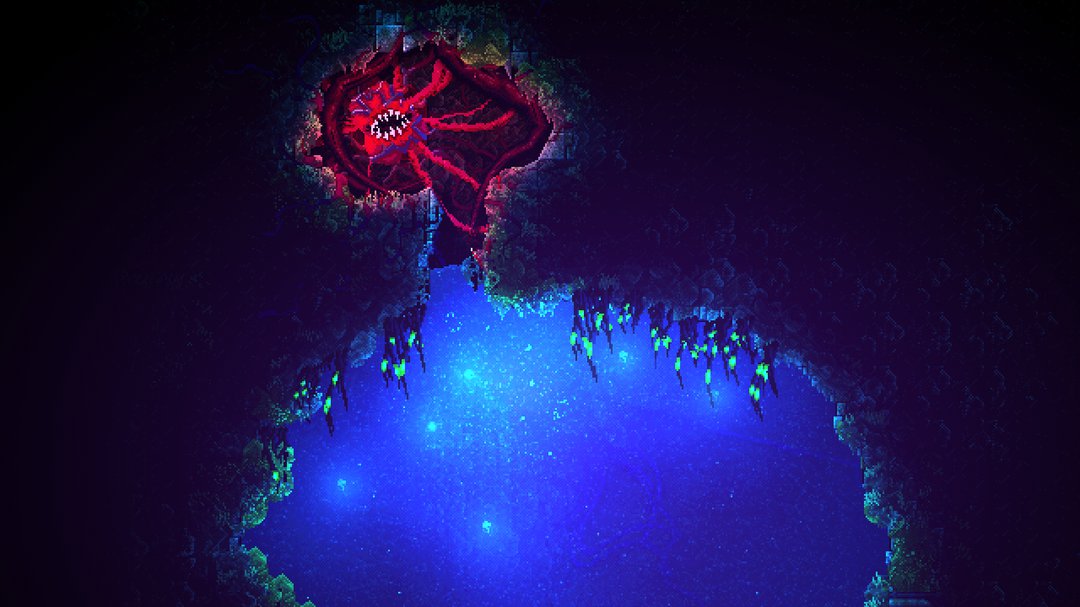 Save points are cracks in alcoves you squeeze into. Keep an eye for them!

So, time for some considerations before you buy. I’ve had it brought to my attention that in addition to the fantastic graphics and lighting effects that give this game its disgustingly good looks, the sound direction is top notch, and that is either a plus or a minus depending on who you ask. There’s a lot of attention put into the sound of metal doors and gratings being tossed around, furniture getting smashed, the whir of miniguns and the pop of pistols firing. But there’s also a lot of squishing as you move around and a lot of screaming. I mean a lot of screaming. If unarmed humans detect you from a room over, you will hear their frightened outbursts even before you tear into their room to separate them from their tasty biomass. Let alone the blood curdling screams after you lay tentacles on them. This game sounds like a horror movie! It didn’t particularly bother me, but keep in mind you will be playing this game for several hours. If you’re squeamish you may want to watch a gameplay video before deciding how you feel on this point.

The game, despite its bare-bones but engaging story, is still also only a handful of hours long. Likely shorter after you’ve beaten the game once. As with my review of Katana Zero, another shorter Devolver-published title, I don’t personally find that a negative. Like Katana Zero I’m left wishing I still had a handful more levels to play, but the game doesn’t overstay its welcome, ending on a high point and making me want to play it again. Personally, I think it’s worth every dollar, but your mileage may vary. 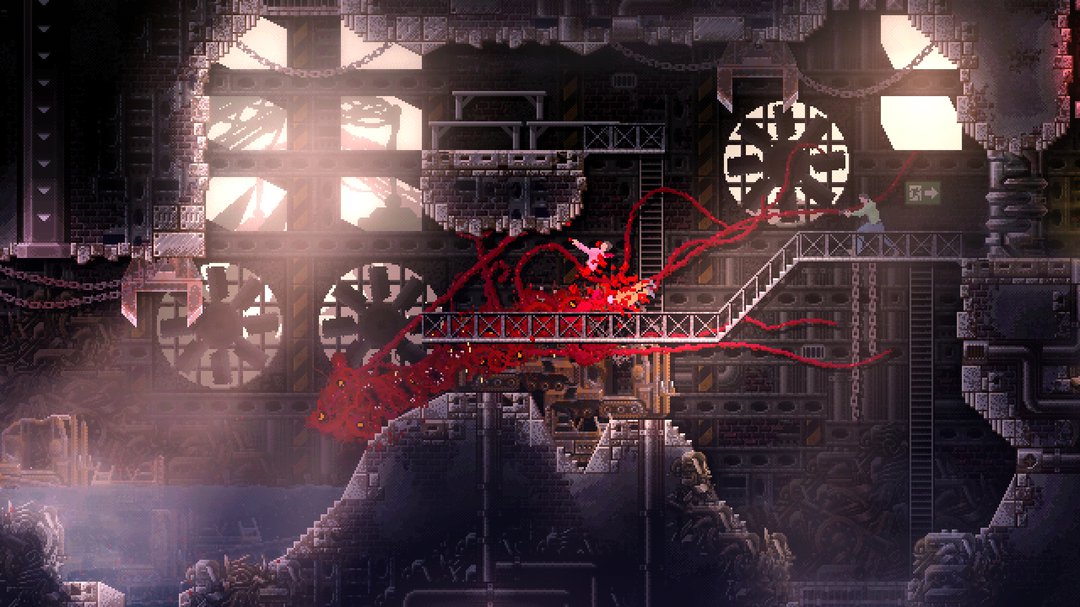 Finally there’s perhaps my biggest overall concern with Carrion. The level design, while fine in its own right, eventually becomes a little mazelike. The game does its best to pop you out of one area near to where you need to go for the next, but sometimes you’ll take a wrong turn. “Is this the way,” you’ll wonder, and because the game really doesn’t make that point clear you’ll find yourself backtracking through areas until you can cross off all the dead ends. No lie, I made these mistakes on both my first and second play throughs. Each cost me about ten minutes of boredom as I crossed off each location until I could find the one that led to progression. And good luck if you accidentally miss one of the save points you need to activate in order to unlock the door to the next area. You’ll be traipsing back through every screen trying to find the one little thing you overlooked.

The end game before the final zone is particularly guilty of this. At this point the entire map is open to you once again, and you’ll find a control room that displays your completion in each area in case you want to go back and make sure you clear all the secrets. Goodness help you if you take a wrong turn! I guarantee you’ll be Googling where to get back on track to actually finish the game.

Does this break the game for me? No. Ultimately the puzzles are good, the combat is satisfying, and the thrill of the hunt drives me ever forwards. The minimalist story isn’t bad either. You’ll feel clever for outsmarting all the pesky humans in your way, until of course you find yourself checking your phone for a walkthrough pointing you back in the direction of the final power you need to escape your prison. 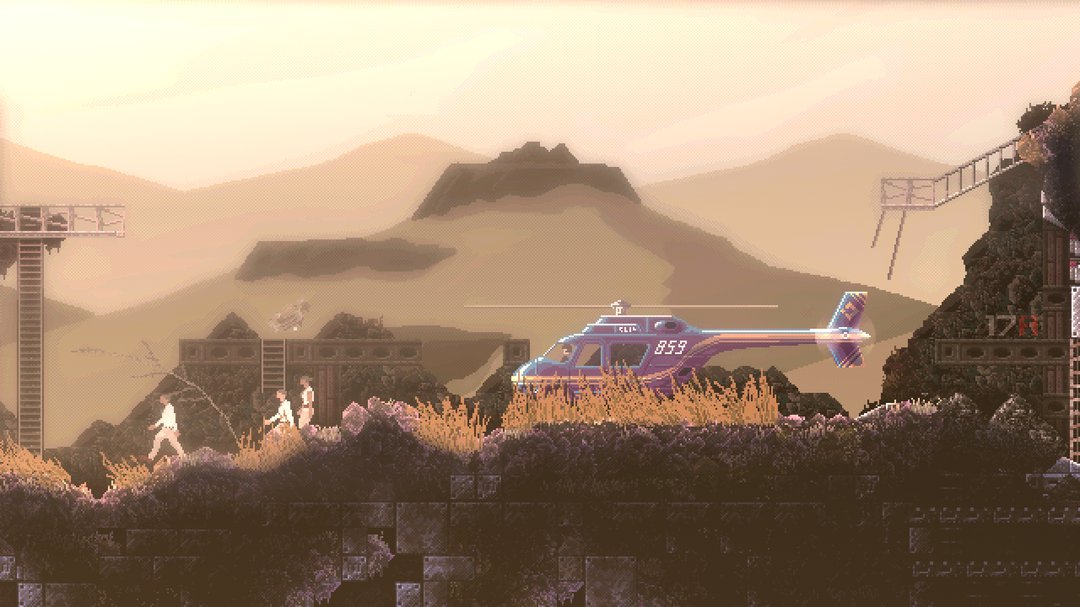 Along the way, the plot thickens!

Just use the bleach under the s—no but in all seriousness, this game cleans up pretty nicely. At its price point, you get a solid little title that will amuse you for the hours you take to beat it and all the hours afterwards you keep playing just for the sheer fun of it. This is exactly the kind of high quality title I look forward to from Devolver, a company that consistently seeks out and works with amazing developers (I actually typo’d “devlover” in my first draft of this review, and frankly ain’t that the truth). If you can put up with the continued, terrified screams of your victims, the occasional late-game map frustration, and a healthy serving of pixelated gore, I’d say this game is well worth every penny spent. Now, if you’d just stand in front of this heat sensor for me, yes that’s it, right there. Just need to make sure we’re all as human as we say here. By the way, do you have dinner plans?