A Gorgeous New Way To Enjoy Being A Druid 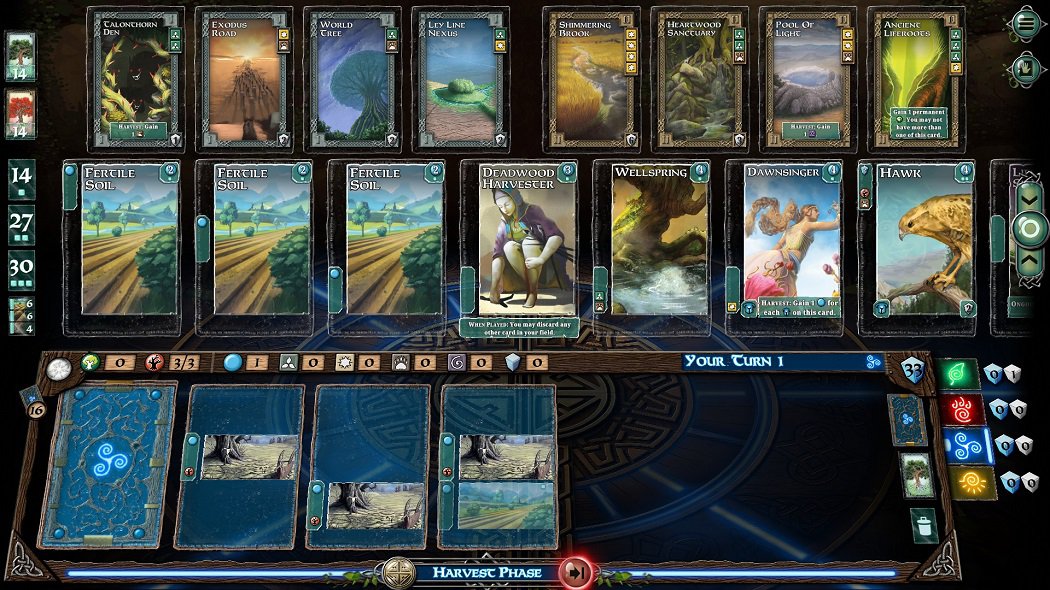 Mystic Vale is a game that we’ve reviewed in the past as a card game; it’s a game that was willing to try new concepts, and succeeded in its groundbreaking ideas. Being druids who ‘crafted’ cards rather than just drafting new ones felt thematic and fun, although the game itself sometimes got in its own way; new rules and mechanics meant more time taking the game out of the box, and more time wasted checking the rules.

We enjoyed the card game, but it was hard to get people to commit to playing games of it when it looked so different. Now, Mystic Vale has arrived in a brand new format, and this might be the best translation of a board game that we’ve seen yet. The question is, has it kept its magic?

How To Grow Your Vale, Mystically

For those of you who have never played or heard of Mystic Vale, this section is for you. The first thing you need to understand is that Mystic Vale is a deck-building game that fundamentally changes the formula. How, you may ask? You only get twenty cards in your deck. Not only that, but half of them are blank. 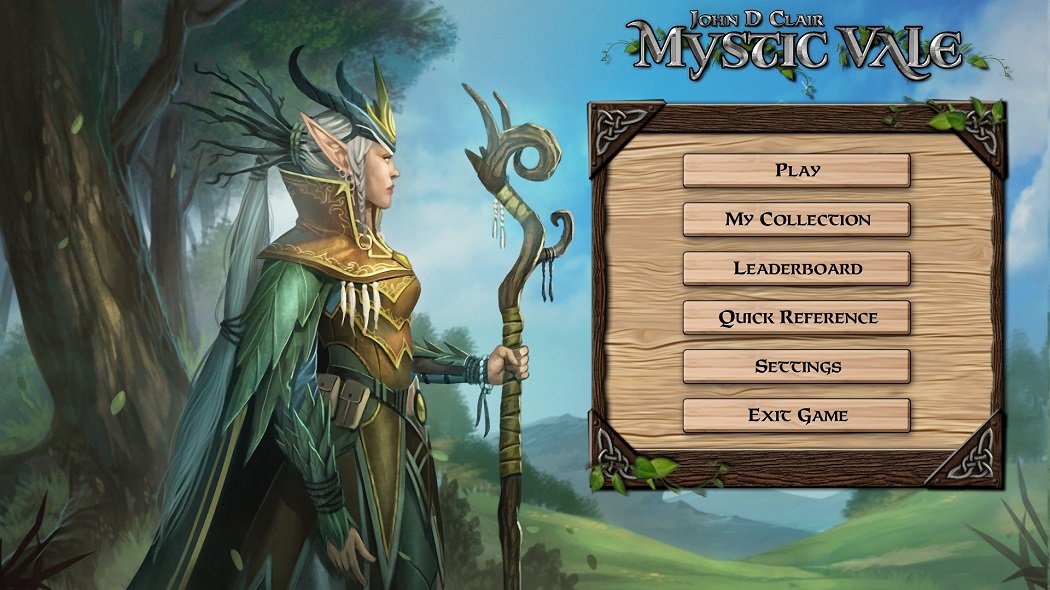 Where Mystic Vale shifts is that the cards themselves have multiple areas to slot advancements into, as a way to make your limited set of cards stronger. That is what you’ll be spending your turn doing: upgrading the cards you already own. Each card has three slots to put various advancements into, and there is a row in which each druid can buy creatures such as hawks or rhinos, or maybe build a wellspring. You take these purchases and slot them into the cards you’ve drawn for the turn; in the physical card game, the cards themselves are plastic laminated sleeves you can slot the smaller advancements into. Here, the magic of technology makes it a breeze.

Mystic Vale doesn’t stop here however; it wouldn’t be a good game if all it did was shift the ‘building’ from a deck to individual cards. What’s exciting is how you draw them: you get to draw your cards until you ‘decay’ three times. This is where the theme of the game – being druids trying to breathe life into a twisted and droughted land – really shines. Nine of your twenty cards start with a cursed land enchantment. While a cursed land gives you some mana, once you see three, you can’t draw anymore during this planting phase without consequences. You are stuck using the cards out in front of you.

Of course, you can push your luck, by choosing to plant more. The top card of your deck is always visible, and you can choose to plant that next card; however, if the next revealed card gives you more decay than your limit, you immediately spoil your land, losing your chance to ‘harvest’, or buy achievements that round. It adds a real sense of suspense to how you build your cards; there are a lot of valuable cards to buy, but a lot of them come with more decay. You can buy cards that might offset some of the decay you already have, but you might waste too much time while other druids are gathering the crystals they need to win the game. Since there's a limited pool of victory points that signals the end of the game, the tension mounts. Did you build an engine of points faster than your opponents?

Knowing what cards to buy, when to buy them, and where to place them... there are a lot of choices you have to make with each turn.

There is a lot more to the game than what we’ve covered – vale cards, collecting druid symbols, victory points – but to be honest, the tutorials in Mystic Vale are so good, this will all make perfect sense in less than fifteen minutes. A game ends when the pool of active victory points is depleted, and you total up all the crystals you’ve either collected or are printed on the cards in your deck and vale. A game is fast, quick, and fluid. Even better, when you are playing digitally there’s no clean up at all – just hit new game, and all the cards are reset, ready to be played again.

Taking Chances For Fun And Functionality

When I started up Mystic Vale to play a round or two, I found myself unable to stop. After two or so, I had gotten in 8-10 games; I hadn’t stopped to look at the time, and my writing notes had stayed blank while I got sucked in.

This alone is endorsement enough, but I think it’s important to explain why this digital rendition is so fun and important. First, I want to compliment the art direction in the game. Mystic Vale itself has some beautiful art, but the developers at Nomad Games took a lot of time to make sure that art sang. Hovering over the cards makes them come to life with seamless animation. All of the wording and iconography is crisp and legible. The music is serene, adding to the atmosphere with sound-cues whenever you use cards.

Making a board game immersive is one of the high goals of any developer, and in a lot of ways, this digital rendition manages it even better than the original release. This is a rare occurrence when board games are translated into electronic format, partially because the charm of board games is the physicality of them: having the chance to move the tokens, roll the dice, flip the cards, it all grounds you in the moment. Here, Mystic Vale has done such a good job that the administrative work of sorting piles and making sure your cards are crafted is seamless. It lets you just play. 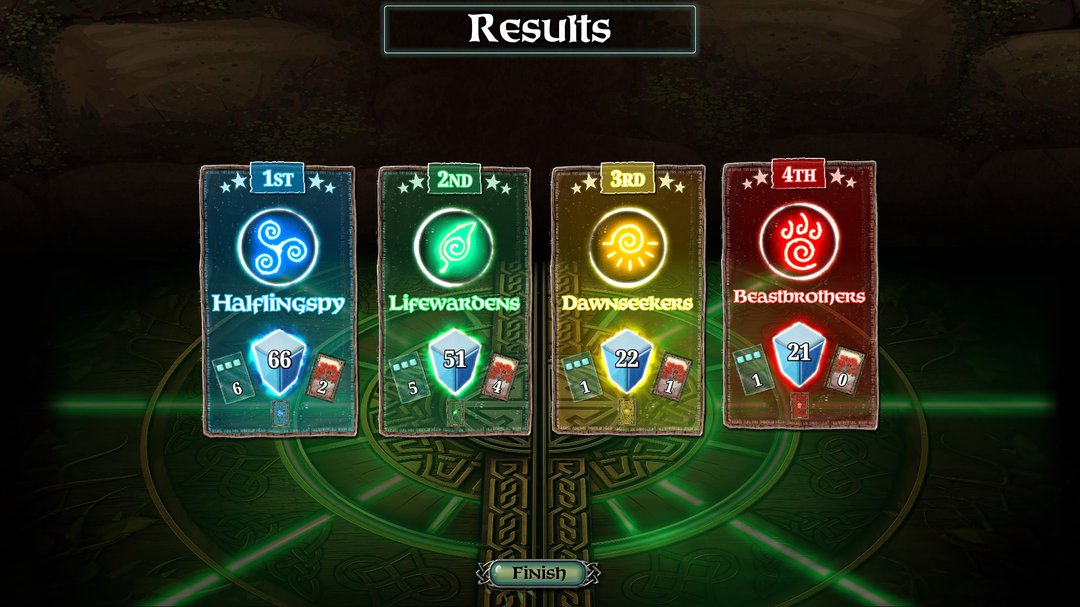 When you figure out the card crafting system, the joy at winning your first few games is amazing!

Up to this point, I’ve mostly just talked about how good the art and UI is. However, I should absolutely point out how the game itself is fantastic. I truly enjoy the challenge of risk/reward that comes from your turn. Having to choose between pushing for more mana and special powers, or using what you’ve been dealt is fun every turn. The rush of seeing your stacks of crystal victory points grow, of seeing your engine to get vale cards flourish…

Put simply, Mystic Vale is a good game that feels great to play.

A Game That Was Made To Grow

With all of those great things being said, there are some drawbacks that do need to be talked about. Fortunately, both are fixable, and both are being worked on as we speak.

The first drawback is – as it is with so many turn based computer games – the AI. Quite simply, most people have discovered they can crush the competition very quickly once they break the ‘code’ of how the game works: which cards give better growth and negate decay, which cards let them multiply their victory points, and so on. While I had never played Mystic Vale before, it took me about ten tries before I knew I could just simply crush my computer opponents. 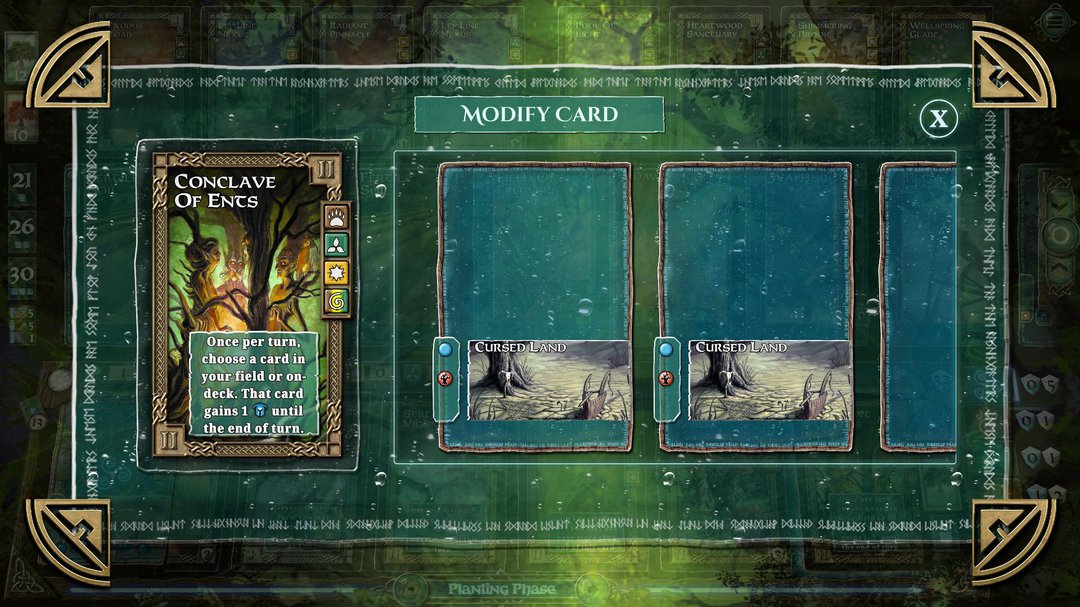 The second drawback is one that the base card game itself also suffered from: sameness. For all of the amazing art and brilliant game design, Mystic Vale suffers from being a problem that once solved, you can replicate easily. There are a few winning formulas, and once you have access to them on the achievement track, many of your games are going to start looking more and more identical, as you realize you can mimic the same strategy again and again for success.

Fortunately, some bug fixes have already come, along with new updates to make the AI feel a little more powerful. It isn’t perfect, but its improving. Nomad games has also moved to work expansions into Mystic Vale at a pretty fast pace: Vale of Magic, Vale of the Wild, and Mystic Storm should be arriving shortly, with the first being in March. Each of these will help expand the pool of options in your advancements and vale tracks, leading to you having varied games with different options.

A Game That’s Been Made Better Through (Digital) Magic

Mystic Vale was a game I wanted to push aside as a fun new curiousity – something I could enjoy for a few hours, and then put away for good. Instead, I’ve been raving about it to my friends. I want people to play this online with. I want the expansions to come OUT already, just to see what wild and new cards I could craft. 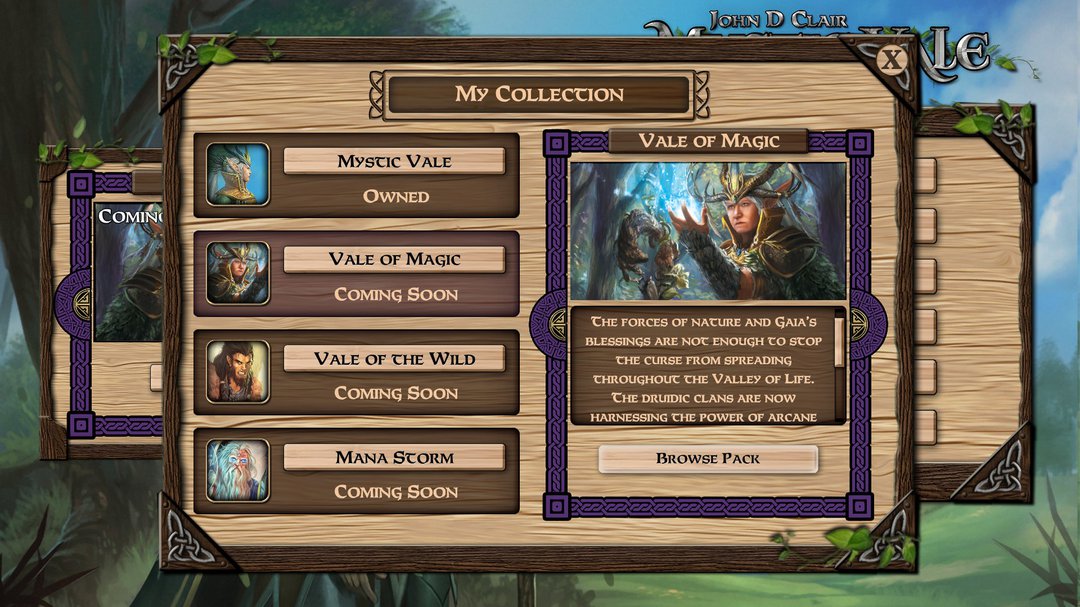 I already want the expansions to be out... typically, that's the mark of a good game you can't get enough of!

Now, I have to say that Mystic Vale is probably one of the best digital translations of a card game I’ve ever played. I recommend it to anyone who has heard of the physical game in the past and has been curious. I recommend it to anyone who has ever played a deck building game and asked “Where else could you go with this”? I’m glad that this game got new life on my computer, and I’m hoping that soon you will be glad too.