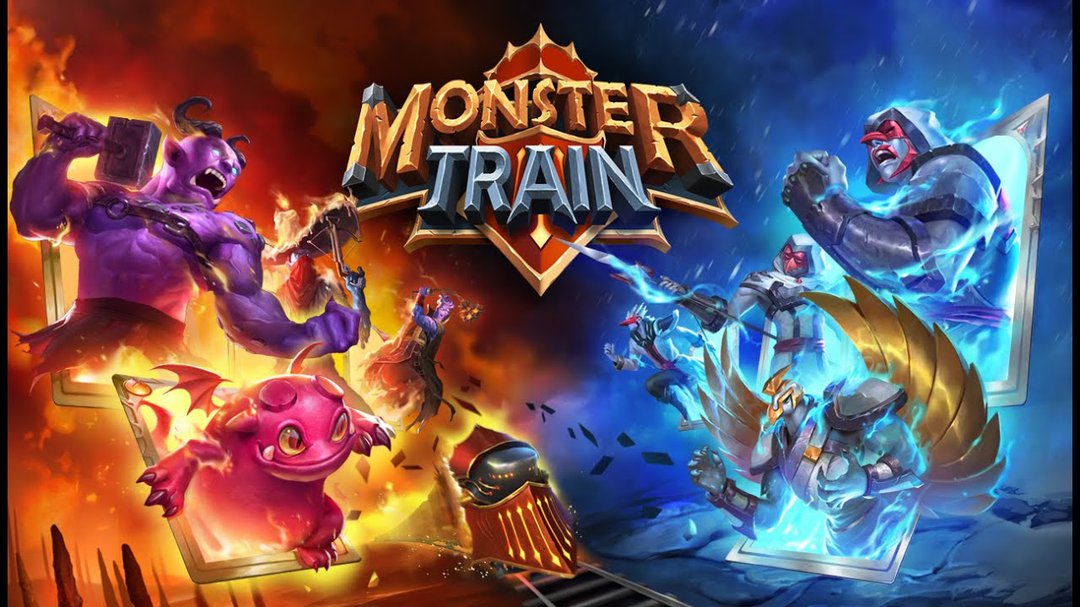 “When Hell freezes over” is right now. The forces of Heaven betrayed Hell and doused its eternal flames, causing chaos on a scale even unknown to you. As the conductor of the Boneshaker - a train carrying a small shard of the Pyre - you are trying use to relight Hell’s frozen heart and restore the underworld to its former glory… by playing cards.

I swear, this game jumps between epic mood and nerdy number crunching so fast it can make your head spin.

Monster Train is a roguelite deckbuilding game in the style of Slay the Spire, which is a trend that you might recognize as becoming rather popular these days. Fortunately, Monster Train sets itself apart with a few new ideas alongside some fantastic aesthetic choices. 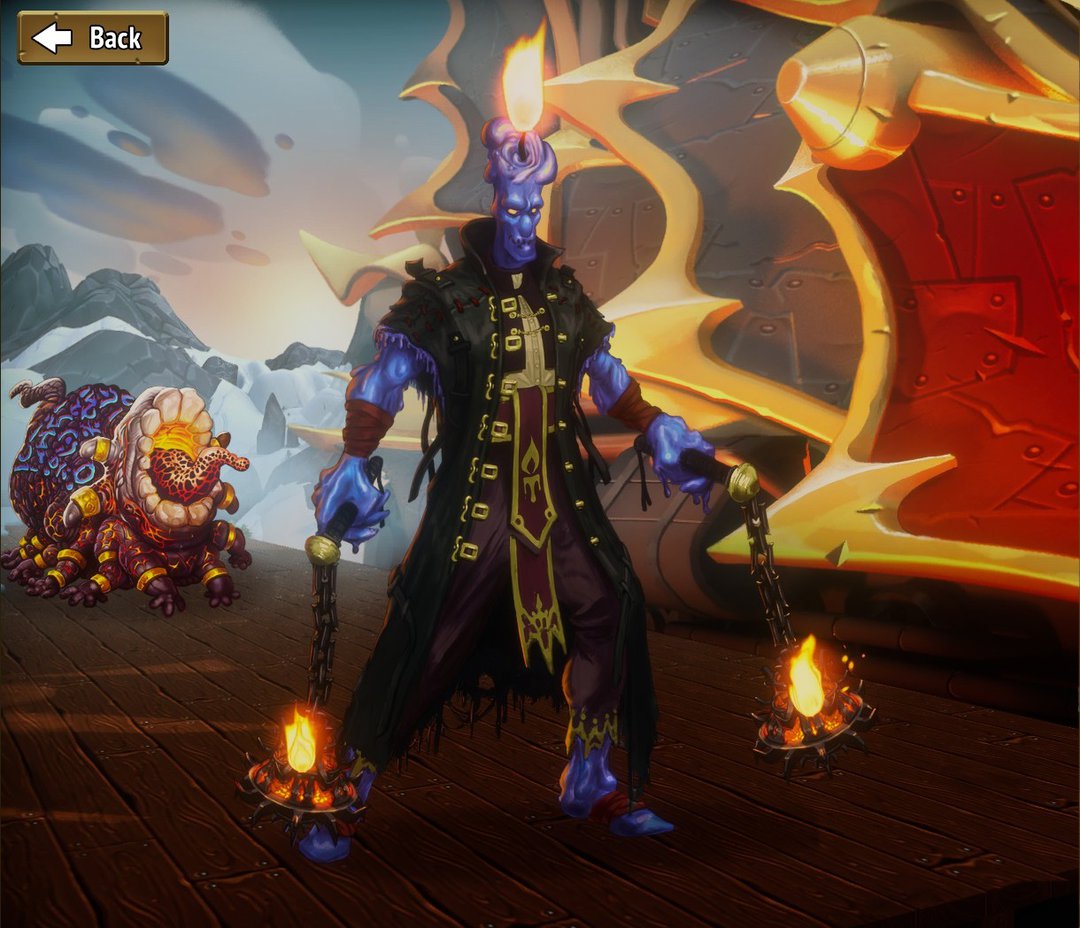 One of the factions you can play as is literally a bunch of melting candle demons dressed as Victorian Hoodlums. I mean, who does that?

Instead of playing as a single character, your deck also contains units that you deploy onto your train. Also, instead of just fighting until one side or the other dies, most battles have you trying to kill the enemies before they can get through your train and destroy your shard of the Pyre; biding your time and playing defense isn’t an option here. It’s an interesting and addictive blend of deckbuilding and area control.

There are five factions to choose from, each with very different mechanics and play styles. This allows for some really fun combinations, like pairing the strong defense of the Awoken with the punishing spells of the Stygian Guard, or the revival powers of the Melted Remnant with the glass-cannon Hellhorned. 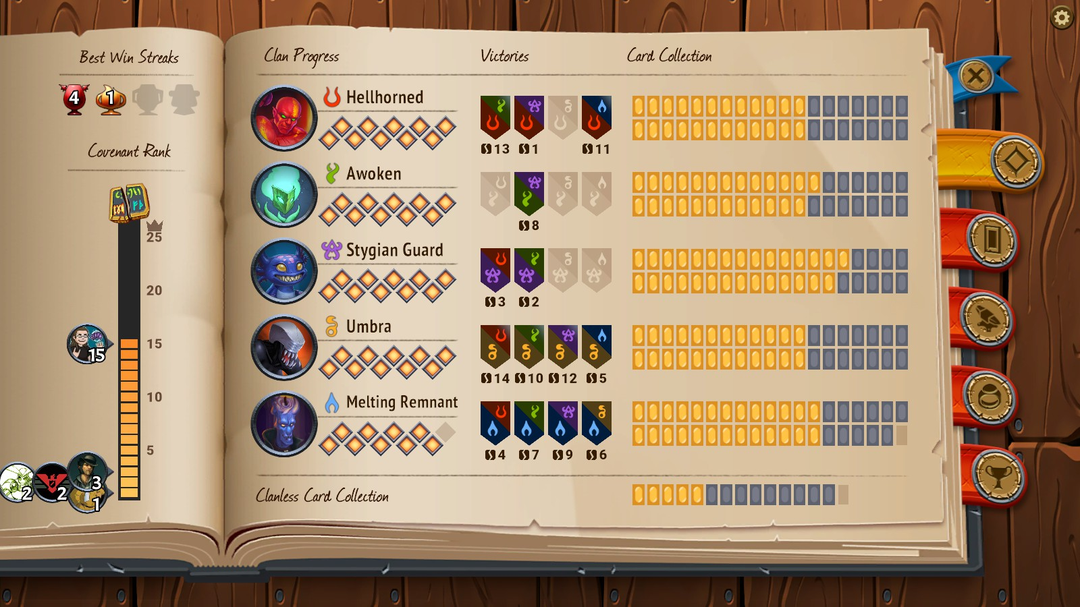 Monster Train's Logbook will track which faction combinations - and even which specific cards - you've won with.

Adding to the customization, Monster Train actually allows you to modify your cards mid-run at merchants, who will let you reduce their cost or increase their power in a variety of different ways.

While you always fight the same three bosses at the end of Monster Train’s three sections, the game does mix it up a bit by giving them different mechanics. Each boss has three different versions you can fight, randomly chosen each run. While I must admit that it feels a bit repetitive to always fight the same three major bosses, there’s enough variety in the rest of the game to keep me coming back.

It will actually tell you at the start which version of the final boss you’re facing, so you can plan accordingly! This is notably different from Slay the Spire, where your Power-heavy deck can get stuffed by The Awakened, or your endless combo deck can get shut down by The Timekeeper, just because you didn’t know who you would be up against. It's a very satisfying change.

There are little bits of lore scattered all through the game. You can find them in enemy descriptions, random events, and even speech bubbles that come up during combat.

We keep contrasting Monster Train to Slay the Spire, but with good reason: Slay the Spire is the reason the deckbuilder roguelite genre went big in video games. You can see where this game purposefully deviates from the formula to try new things and reinvent itself to great effect, and where it still has a little more polish or work to put in. There are things Monster Train does better than its predecessor (customization options and an interesting new twist on the genre), and things it doesn’t do quite as well (fewer bosses and a much more annoying merchant character), but on the whole it’s a great game.

I’ve personally sunk almost 80 hours into Monster Train at this point, and I can see myself spending many more riding Hell’s rails. 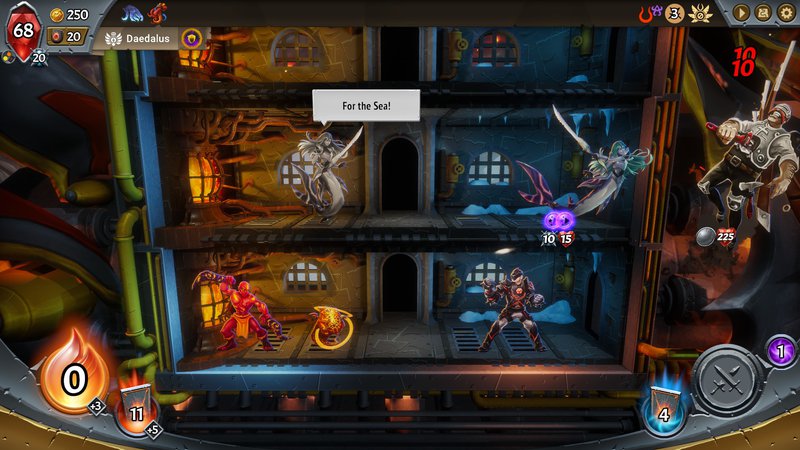 Make no mistake, Monster Train is tough. The game has 25 levels of increasing difficulty, but even the basic mode will probably take you a few tries to beat whenever you are trying out a clan for the first time. By the end, when you’re dealing with stronger enemies, less space on your train, and other handicaps, it can be a nightmare.

The good news is that Monster Train offers a lot of truly broken combinations of cards, events, and items to help you pull off a win. You can do things like take an already good card, enhance it until it’s way overpowered, then duplicate it (5 times if you’re lucky!). Or you can get an item that randomizes the costs of cards in your deck, then load up on all the strongest and most expensive things you find. 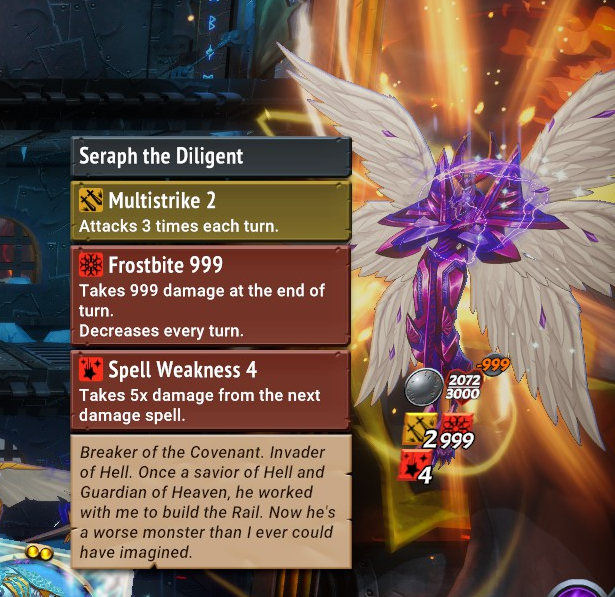 1k of free damage per turn should do the trick...

A Railroad To Triumph

Monster Train is already a hit, boasting an Overwhelmingly Positive rating on Steam with nearly 7,000 reviews, but this train just keeps rolling. Their first major update (which was free) introduced 35 mutators to make your run easier, harder, or just plain weirder. Want units who die to be purged from your deck forever? How about double gold, or half gold, or maybe a whole lot of dead cards clogging up your deck? There are a lot of options, and you can pick up to three per run.

On top of that, if Covenant 25 is (somehow) too easy for you, the update also added 15 expert challenges that you can try after beating it. I… can’t really talk about those yet, because I’m still beating my head on a wall with Covenant 23. It's a good start to supporting Monster Train as it plows ahead; adding a little more variety in bosses, enemies, or cards will just cement this game as one of the greats. Hopefully in the future, Shiny Shoe games will add another clan in the mix: adding just one more would create a whole new set of deck variations that would make the game feel like new again, even 80 hours in.

End of the Line

The final word here is that I highly recommend Monster Train. It’s a fantastic game with lots of customization and lots of replayability as you try to master the various clans. If Slay the Spire is starting to lose its luster, or you want to try a different spin on the genre—or, heck, even if you’ve never played Slay the Spire at all—Monster Train is well worth the 25 bucks.