Looking At The Starfinder Beginner Box

Your Shortcut To The Stars 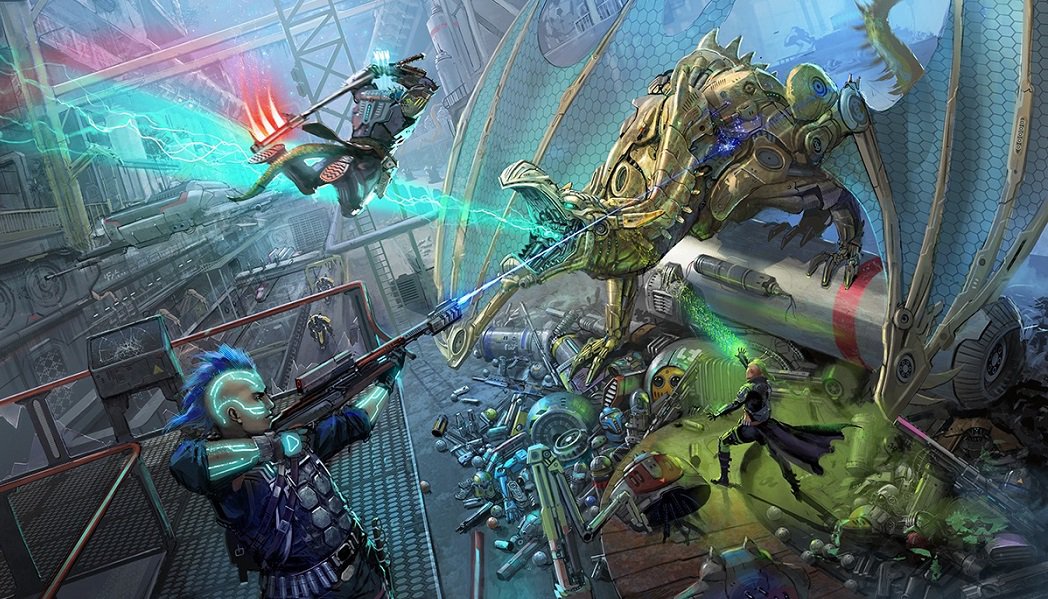 One day Wyatt came to us with something called the Starfinder Beginner Box. As our resident Pathfinder fanboy I immediately made with the grabby hands and was told that, yes, it was already set aside for me. This was pleasing, and I quickly tore it open to see what was inside.

For those of you that don't already know, Starfinder was a recent offshoot of the popular Pathfinder series, hoping to take the success from that fantasy world and launch it into space. I’ve previously reviewed the Starfinder Core Rulebook and already discussed the system itself in some depth . For that reason, this article will be focused more on what’s actually in the box.

In short, this comes packed with everything you need to take Starfinder for a test drive, and is especially useful for someone starting off running a tabletop RPG for the first time. You’ve got all the basic accessories: A set of dice, reference cards for the most common actions and conditions, an (actually fairly impressive) assortment of cardboard pawns and stands, and what might be my favorite thing in there: A foldable, laminated, double-sided play mat for encounters. Your game won’t look like Critical Role, but you’ll have everything you need to get the action from your imagination to the table.

There are also six premade characters if you want to jump right in, along with six blank character sheets if you want to dig in a little more and try making your own. Pro tip: Scan one of the blank sheets so you can print more out later, they’re quite nice.

The Beginner Box also comes with two heavily abridged versions of the Starfinder Core Rulebook: The Heroes’ Handbook and Game Master’s Guide. The Handbook comes with a very quick plug-and-play method for building characters (pick race, pick class, pick stats, pick equipment, off you go). There’s a quick solo adventure so you can try out the system and get a feel for it before jumping into a group campaign. The Handbook also includes instructions for getting up to level four, though if you want to go beyond that you’ll need to buy the full rulebook. The chapter about legacy races (elves, dwarves, and such) is also notably absent. 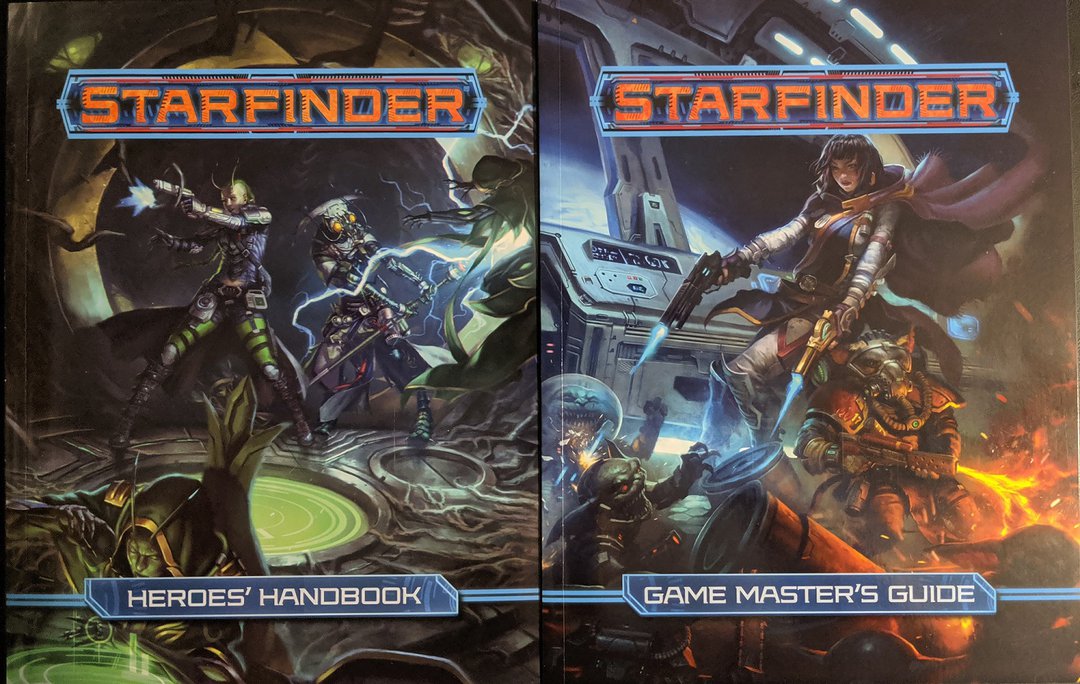 Mind you, the 'abridged' books are still about 100 pages each!

The Game Master’s Guide opens with a short adventure (really just a series of ten encounters) along with tips to ease both players and GMs into the system. After that there’s a crash course in how to run your own adventures; before even getting into the rules there’s a section on simply being a good GM, and how to keep sessions fun and engaging for your players. Then the Guide gets into the nuts and bolts of creating custom areas and encounters. In addition to rules about how to play and how to deal with various situations, these chapters include tips on creating a fun “dungeon” for your players to explore, a couple of basic loot tables, and a few dozen enemies you could use in encounters.

In short, you’re basically getting the trial version of Starfinder.

What's Not In The Box

I’m not going to fault the Heroes’ Handbook for only bringing you up to level four, or for not including every single playable race. It’s meant as a demo for Starfinder, after all. Going from level 1-4 is a perfectly respectable beginner campaign, and showing off the new races (while teasing that you can play as your old favorites in the full version) is a great hook.

What I am going to fault it for is including absolutely nothing about starships. No premade ship, no plug-and-play method for building one, no basic rundown of what you can do with it; if all you read was the Heroes’ Handbook you wouldn’t even know that you could have a starship.

Perhaps Paizo felt that it would be too much to throw at players all at once - the ship combat system is basically like having to learn Attack Wing on top of Pathfinder - but it’s such an important part of the game that I can’t just let it be completely overlooked. Starfinder with no starships is just sci-fi Pathfinder ; and while I am a ride-or-die Pathfinder fan, I’d really like to see Starfinder show off what makes it different, not just all the ways it’s similar to an already-beloved game. Leaving out starships also means that new players might be blindsided when they get the full rulebook and realize that there’s a whole other game inside their game.

What’s missing from the Game Master’s Guide is really a matter of quantity and variety. It gives you all the basic stuff: Generic loot, some different types of enemies, and rules and tips for the situations you’re most likely to encounter. It’s enough to let you run a bare-bones low-level campaign, but you’ll need to buy more sourcebooks to really get into the meat of Starfinder. 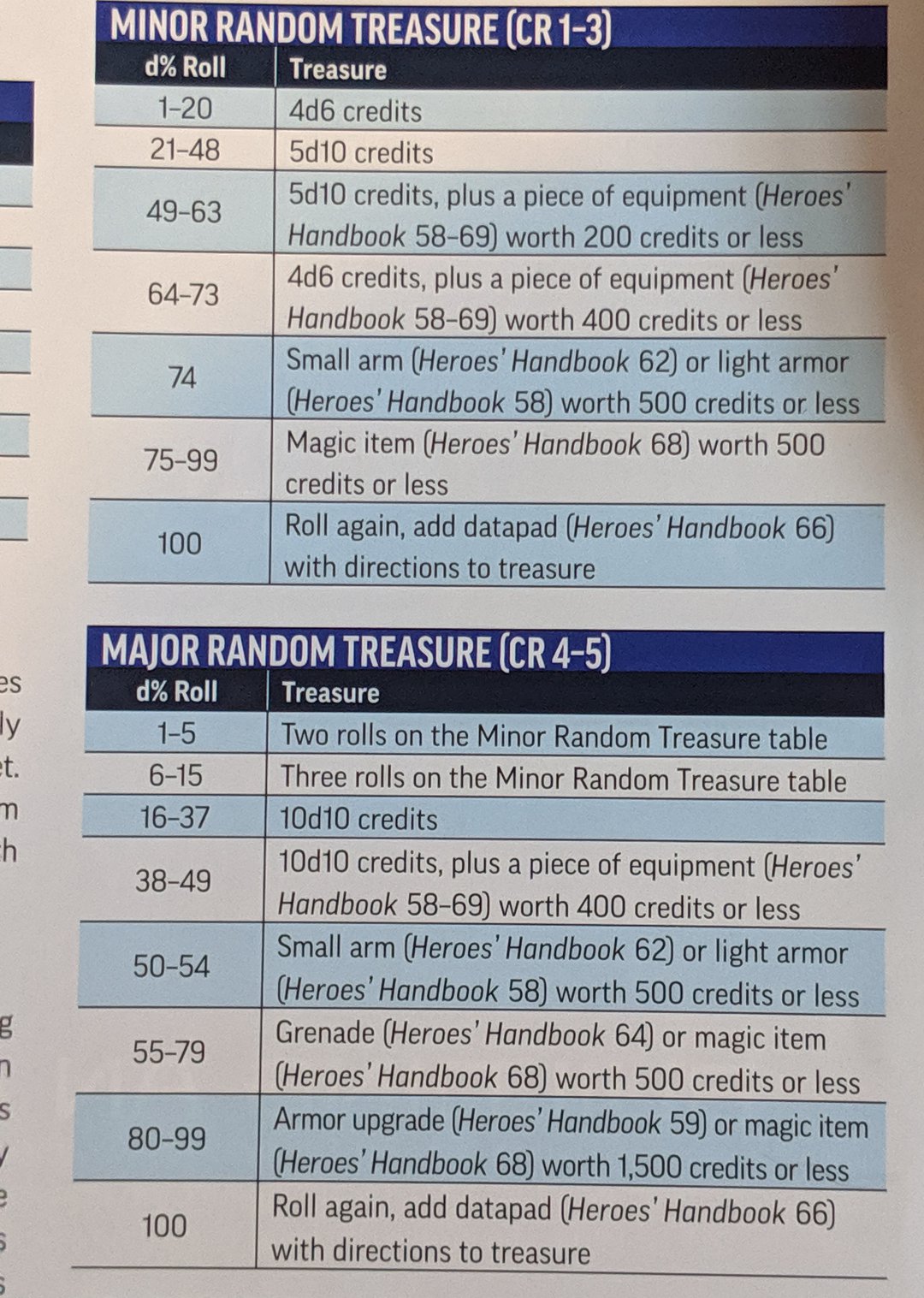 I mean, there are only two loot tables. By Paizo standards, that's barely enough to loot a goblin!

Still, the Game Master’s Guide is a perfectly fine, if small, slice of Starfinder that does a fine job of getting you hungry for more.

Is It Worth Buying?

Yes. The Beginner Box really is perfect for beginners; not necessarily even new Starfinder players, but people who are new to tabletop gaming in general.

A decent game mat alone could run you $15-$20; throw in a set of dice and you’re paying more than half the cost of the Beginner Box already. That, plus the cardboard pawns (which include a lot of generic enemies like “drow,” “aeon guard,” etc.) make the box worth the $40 just for the accessories that come with it. The rulebooks are almost incidental, though they are (for the most part) a great introduction to Starfinder. 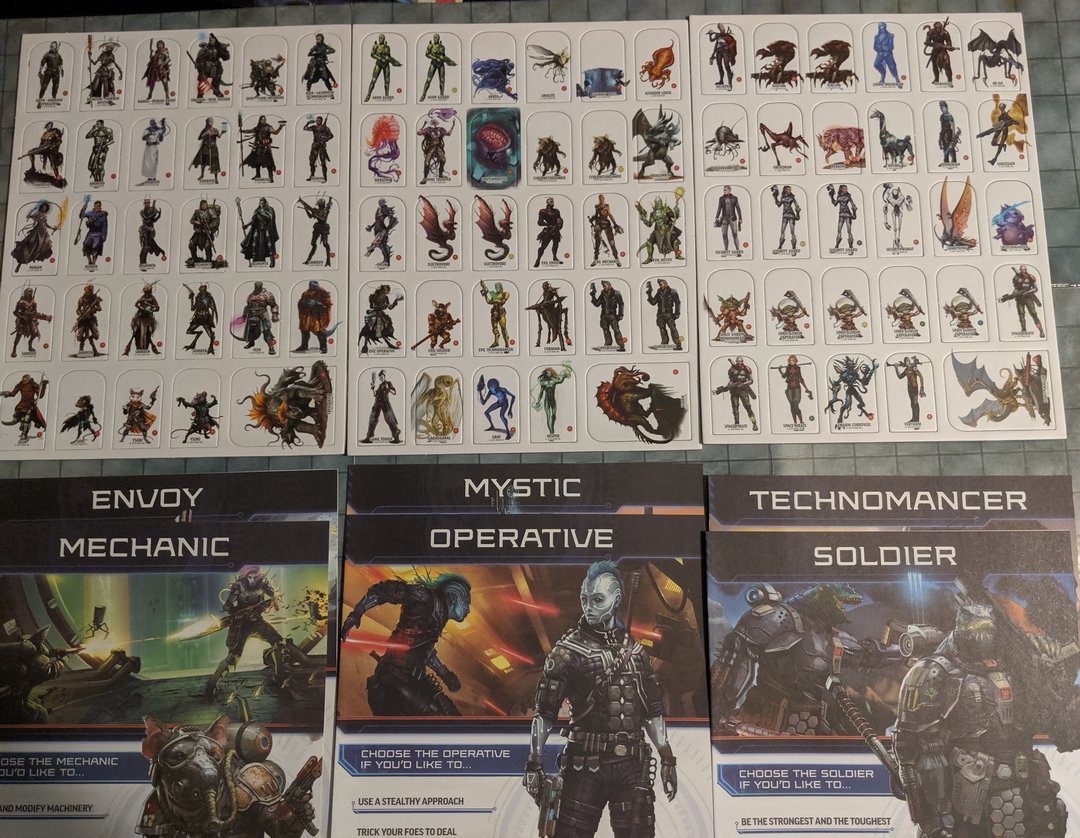 A highlight of the box is the pile of tokens you get - a modest but easy way to add visuals to your game.

The only people I wouldn’t recommend the Starfinder Beginner Box for are… well, people who aren’t beginners. If you’ve already got dice, a play mat, and things to put on the play mat, this box isn’t going to be of much use to you. Some Starfinder -specific standees may be nice to have, but I wouldn’t buy the box just for that. If you’re old hat at tabletops and just looking to try out a new system, you’d be better off taking your $40 and buying the Core Rulebook instead to get the full experience.

Overall, except for the total lack of starships, the Beginner Box is a great introduction to Starfinder and comes with a lot of stuff that can help you out in other RPGs as well. If you’re new to tabletop role-playing, or if you think it’s finally time that you got some of your own stuff to play with, this is well worth the money. On the other hand, if you’re an experienced player looking to try a new system, this may not be the best path into Starfinder for you. The Core Rulebook is nearly the same price, and if you don’t need the accessories that come with the Beginner Box, you are much better off buying that instead.

Have you been wanting to give Starfinder a shot, and didn't know where to begin? Maybe you are entirely new to RPGs, or this is your first time running a Sci-Fi based game; all of these are great reasons to check out this starter set. If you've wanted an excuse, this is it. Good luck out there in the galaxy - make sure you bring a good crew along for the ride!