Lichdom:
Battlemage
The Review In Which The Mage Always Wins 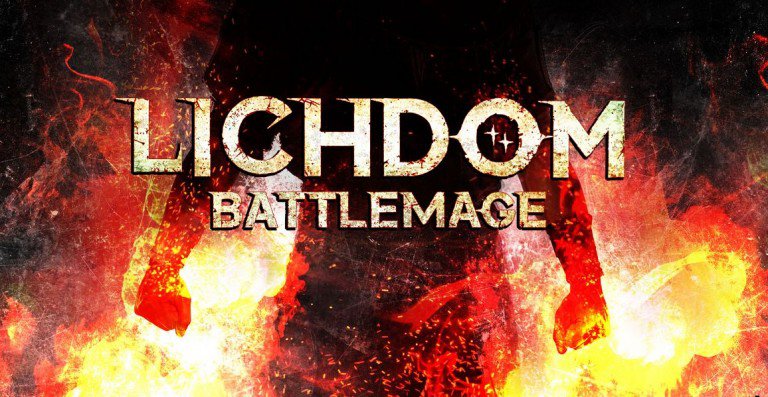 Lichdom: Battlemage is a game created with a single goal in mind: making a mage who is as powerful as a mage should be. The game's developer, Xaviant, explained that they were doing this by eliminating what they believe to be artificial restrictions on magic-users, including things like limited mana pools, spell recharge times, and low durability. By making a game your only option is a magic-user, all of the reasons why you don't automatically pick a magic-user in every game ever suddenly go out the window. Xaviant promised to let you play as a mage who is, to use their own words, a badass. Boy, did they ever deliver.

My first experience with Lichdom: Battlemage was at PAX East 2014 where, along with Wyatt and some of our other friends, we were given an excellent presentation and allowed to play a polished, fully-functional demo of the game. Wyatt wrote an in-depth review of our experience, and it took a game I had heard nothing about and transformed it into a must buy. It was obviously something that had been made to be fun, and something created to let you lay waste to thousands of foes. Why wouldn't I like it?

The first thing a new player will notice is that this game is absolutely beautiful. Everything from the backgrounds, to the magic, to the character designs —granted, some of those are rather fanservice-y—is rendered in loving detail.

The opening cutscene sets the stage as two cliché villain types kill your character's wife (or sister, if you select the female character) and you go to seek revenge. You are quickly granted that chance as a wizard named Roth saves you and gives you a pair of bracers that he says will grant you “infinite power.” He explains that there is a curse on the land, draining its people's vitality and bringing the dead to life. Shax, the man you are pursuing, is somehow involved with it. You become the Dragon, the bearer of the bracers, while the character you did not choose to play as becomes your Gryphon and guides you through the game.

Alright, so Lichdom won't be winning a Pulitzer Prize for Fiction. The gameplay is where it really shines. I have torn through countless legions of demons in Diabloand shot dragons out of the sky in Skyrim, and I have never cast a spell as satisfying as that first fireball in Lichdom: Battlemage. Maybe it's the deep whoosh as it leaves your hand, the glorious explosion it creates when it hits, or the way it blasts the first skeleton enemy halfway across the screen, but there's something viscerally enjoyable about using your magic in Lichdom—which is a very good thing, because you'll be doing it a lot . The game is a first-person dark fantasy RPG, where you take on hordes of the undead and the occasional raiders and soldiers: this should typically be 'unknown soldier' or Master Chief territory, but the bold move to put a robe wearer into this game has paid off greatly.

In addition to your basic attack spell, you also have access to a shield spell, a more powerful area-of-effect spell, and a short-range teleport called blink. Your Dragon is protected by three layers of wards, which are essentially your hit points. They recharge automatically unless one breaks completely, in which case you must find certain items to restore it.

As you progress in the game, especially during boss battles, you'll start to wish you had a whole lot more than that. This brings us to a very important point about Lichdom: Battlemage. Yes, you are a badass wizard who is capable of taking on armies by yourself, but that does not mean that this is an easy game by any means. Most basic enemies can be powered through with relative ease, but it takes patience, quick reflexes, and skillful combinations of magic to bring down the big baddies. 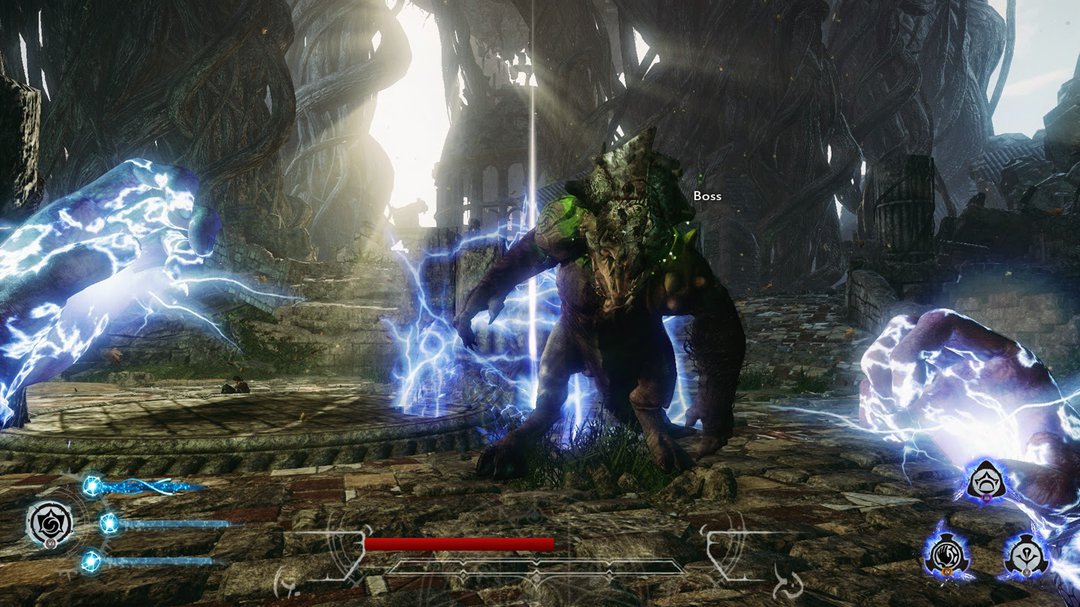 Yep, that's the FIRST boss, and he can kill you in two hits.

It's also a bit of a challenge learning your way around the crafting system and how various spells interact with one another... not to mention keeping all of the terminology straight. Mastery? Okay, so some spells store up damage that can be amplified and released by later attacks. But wait, what's Stored Damage, then? Oh, that's specifically extra damage that the enemies take while frozen. Crit Casting? Apocalyptical? Synthesis? Nova? It's like learning an entire new language, and that's before you even get into the crafting. That's something I really appreciate about Lichdom: you can do absolutely awesome things, but you have to work for it. The badassery is right within reach with this game, and it feels all the better once you really get your character going. 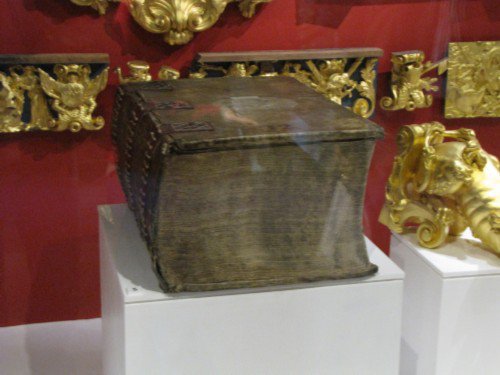 Hold on, just let me check the dictionary

Spells are fully customizable through the use of sigils, patterns, and augments. You collect sigils as you progress through the game, and they are the basic type of magic your spell will be: fire, ice, corruption, etc. Patterns decide the form of the spell, such as stream, ball, defensive, or AoE, and augments allow you to increase the spell's power or grant it other special effects. Patterns and augments are dropped randomly by enemies. Xaviant has released an in-depth official crafting guide, which is available through Steam or Xaviant's website, or you can take my preferred trial-and-error approach to see what works for you.

The crafting is arguably the most important thing to master in Lichdom, because you won't make it very far without a good arsenal of spells at your disposal. However, it's also been at the center of a lot of complaints about the game. People have said that they don't feel like badasses when they have to spend so much time and energy making sure they've got the right spells, and are casting them in the right ways, in order to be badass. If you're looking for effortless slaughter—which, let's be honest, is something we all need from time to time—I'd suggest going back to Diablo, because you won't find it here.

Finally, as much as this game features a heavy-handed, done-to-death plotline, there is actually quite a bit of lore to find. It doesn't get shoved down your throat, but if you open your character's journal from time to time, you may be surprised at how many entries you've picked up along the way. These explore topics ranging from terminology, to enemy details, to history and current events. You can even get glimpses into the life of the previous Dragon through small tears in reality and a bit of Jedi hand-waving about how it all works. You can take the lore or leave it, but if you're interested, you can actually start piecing together the world and how it came to be the way it is.

As a side note, I do want to share one amusing experience I had: As I was traveling through the caves of the second or third level, I suddenly found myself outside in a wide open field. Thinking it was part of the game, I looked around, but there was nothing to see except for a big ravine at the edge of the map. When I tried to call my Gryphon to ask her where to go, she just sort of flew around in circles for a bit before disappearing. Finally, I jumped into the ravine, died, and respawned back at my last checkpoint to continue from there. I eventually realized that I had somehow glitched through the cave wall and wound up outside in an area that I wasn't supposed to access.

Overall however, while suffering from an uninspired storyline and the occasional glitch, Lichdom has a lot to give, and is one of the most satisfying FPS games I've played in a long time. Xaviant certainly succeeded in its goal to make you feel like a truly "badass" mage, while keeping the spirit of the magic-user, refraining from just making you a mindless, spell-slinging barbarian. The graphics, the crafting, and the thing we're all here for, the magic, come together to create a fantastic experience that feels compelling and unique.

So, what will it be for your first perfect spell combination? Infesting enemies with parasites before exploding them, freezing them in ice before electrocution? There's a whole world of pain just waiting to be explored.