I reviewed Depression Quest for StoryCade, and you should too! 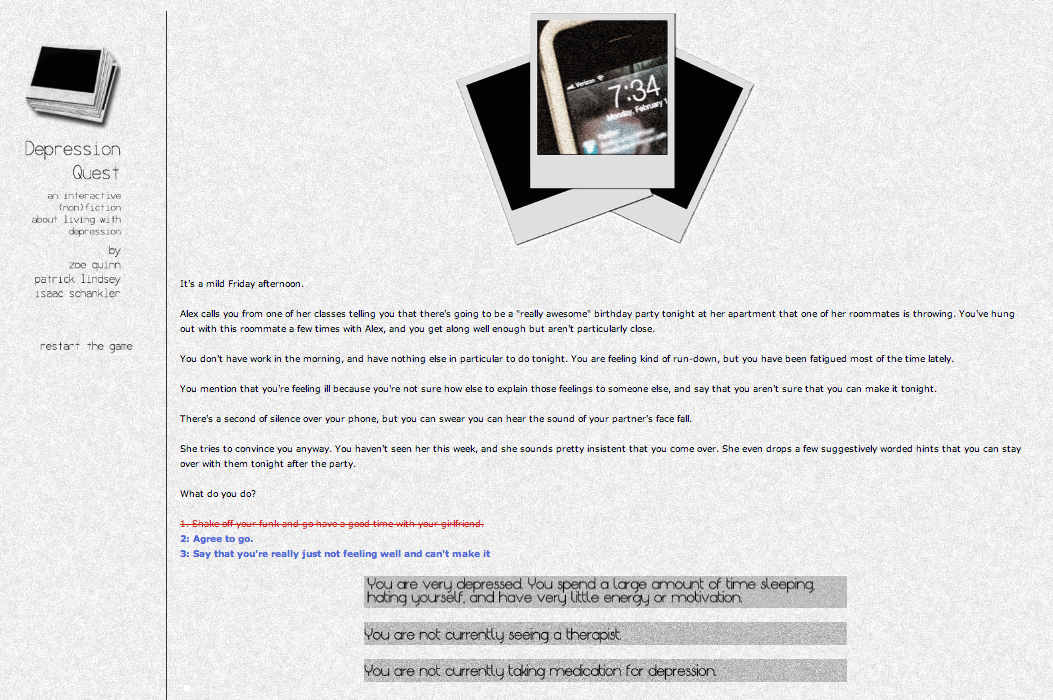 Zoe Quinn has undeservedly been the subject of a lot of crap lately, as have many other developers. Phil Fish and Polytron were hacked last night. Many developers are facing constant harassment on Twitter, doxxing, death threats, and more. Just because they make games. (If you care about combatting this, Leigh Alexander's article, But WHAT CAN BE DONE: Dos and Don’ts To Combat Online Sexism a good, long read, as well as Mattie Brice's How Do I Help?)

Today, I don't want to draw attention to the controversy, other than the fact that it's happening. What I really want to talk about is Depression Quest (it made my top games of 2013 for a reason).

Depression Quest is a text-based choose your own adventure game about living with depression. It's an educational tool meant to teach people what it's like to live with depression, and also serves to let sufferers know that they're not alone in the struggle. After a long trek with Steam Greenlight, the game has finally made it onto the Steam store. Unfortunately, it's been overshadowed by a mess of problems.

Depression Quest was set to release last week, and it did, albeit quietly. Robin Williams died of suicide the same day, after having struggled with depression himself for years. It couldn't have been timed any more poorly, and out of respect, Zoe decided to release the game quietly as to not draw any unnecessary controversy.

So I am launching the game. Quietly. I will not be promoting it until a respectful time later. But I want it to be out there and available in all the ways I can make it be available so that if someone needs it, they have it. After agonizing over it and asking the general public, they’ve overwhelmingly responded with pleas to release it. Especially among depression sufferers.

Over a week has gone by, and Depression Quest has been overshadowed by a load of unnecessary controversy. To combat this, StoryCade is asking the internet for reviews of Depression Quest, in hopes to saturate the web with publicity.

I've wanted to share my thoughts on this game for a long, long time, but couldn't find the words until recently. Read my review on StoryCade here, and consider emailing them at thestorycade@gmail.com with a review of your own. Good, bad, it doesn't matter. We want to discuss Depression Quest as a game, not the personal life of the developer.