A Fun, Off-Putting Descent Into Chaos 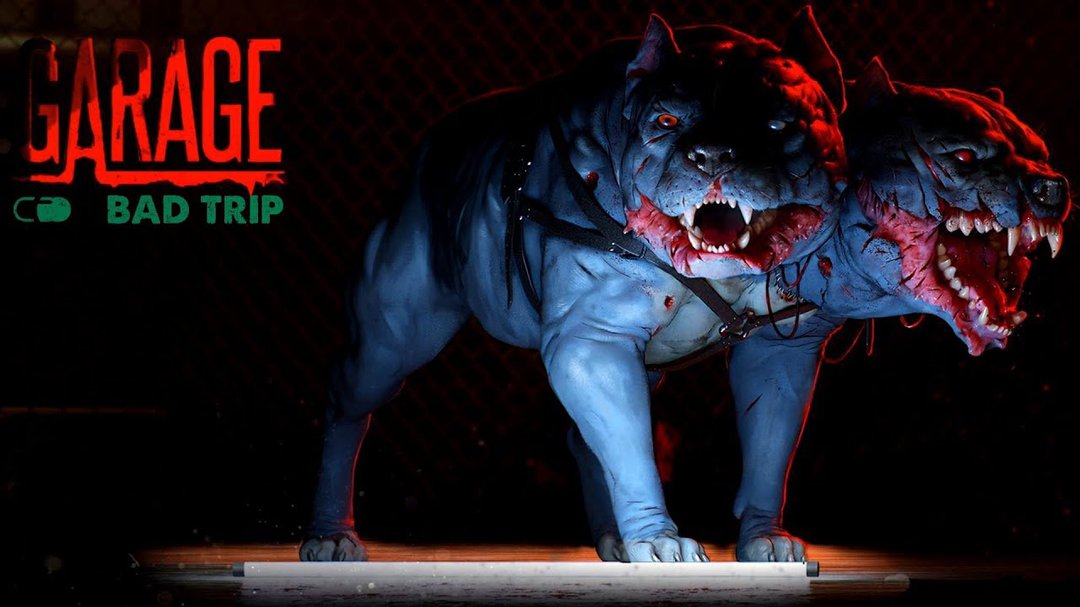 My first thought upon seeing this game's name was “well, how bad can it actually be?”

Turns out, it’s a trip that puts Alice’s plunge down the rabbit hole to shame.

Garage: Bad Trip is a top-down, twin-stick shooter that seemingly puts the entirety of its efforts into giving the player a sense of unease. The Alice of this story is a gruff mysterious drug-dealer named Butch, who awakens in the trunk of a police car in an underground parking garage. Butch stumbles out of the trunk with the all-too-familiar trop of amnesia, and begins his descent into a garage where people come back from the dead. If course, that's only the start of your troubles. 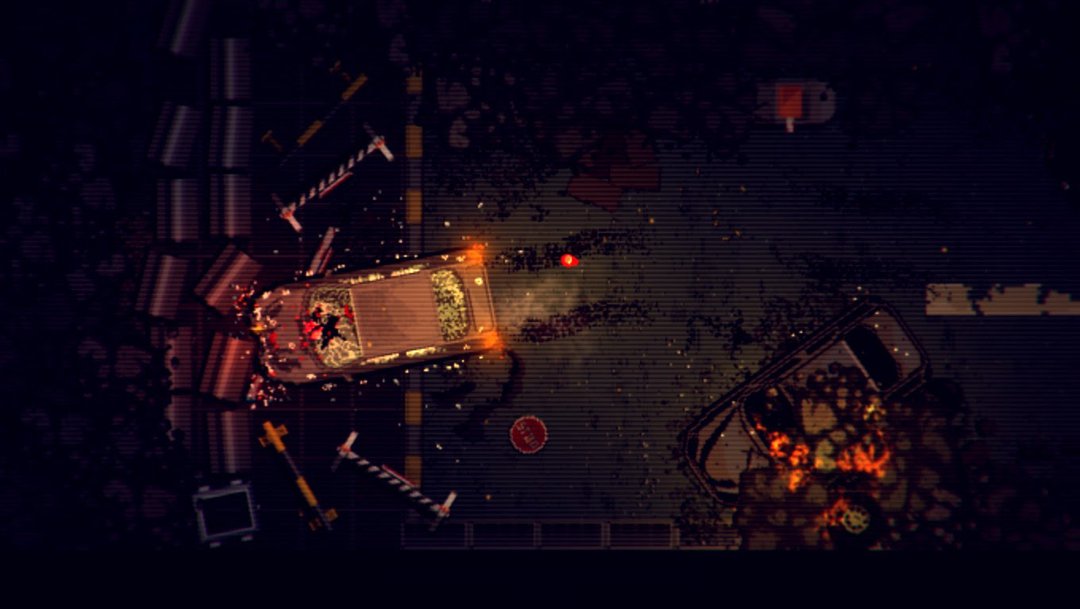 Waking up in the trunk of a car means last night must have been fun.

The plot of Garage: Bad Trip slowly unfolds, giving an explanation for the zombies and mutants apparent throughout the sprawling subterranean parking garage but leaving a little to be desired. Told mostly through notes found scattered across the map or news broadcasts on abandoned TV’s, the story is more like a puzzle that must be pieced together. While it’s an approach that requires more involvement from the player to understand the story, it punishes those that miss or don’t look for every single hidden note containing exposition for the games events.

Understanding the story of Garage is only made more difficult by the dialogue in the game, which at times feels like it was written by someone on a harsh trip. Characters speak cryptically, and phrases are repeated with almost ritualistic purpose; it’s all very off-putting. In fact, nearly everything in the game is off-putting, from its sporadic soundtrack to its eerie visuals. Nothing in the game feels quite right, and this feeling creates a truly unnerving atmosphere throughout the game.

The par for this course is set upon your first encounter with a zombie. After delving a floor down, Butch comes across a body, maimed almost with purpose. Upon returning to where the body was, it had disappeared (of course), and left behind a trail of bloody footsteps. Butch follows them and encounters the shambling corpse, which lets loose a terrifying shriek and sprints towards Butch, arms outstretched and ready to eat. The slow pulsing synth that had been playing was replaced by screaming notes, and from this moment on I was shaken. 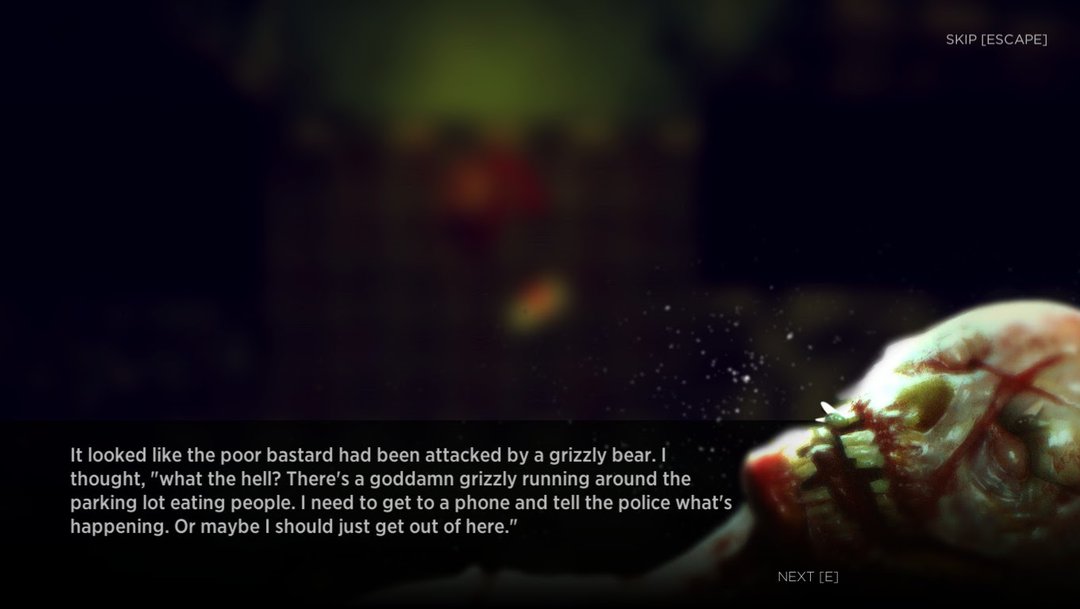 Zombies in game look much more unnerving than this caricature lets on.

From startling visuals, made only more impressive by the pixelated style of the game, to the masterful use of music and sound cues, Garage: Bad Trip is a world class lesson in crafting an atmosphere. It is consistently strange, and doesn’t let an ounce of normalcy in. There are no constants except for the undead and Butch’s will to live: normalcy was thrown out the window a few days ago, and is still lying in a puddle of its own blood.

Fighting Off the Madness

In exercising his constant will to live, in that first encounter with a zombie and without any weapons, Butch does what he can; punch and kick the thing until it drops. Combat in Garage: Bad Trip takes some getting used to as it is wildly inconsistent during the start of the game. During the first few floors, Butch is armed only with his fists and a fire ax, which, while admittedly badass, is not very effective at keeping oneself in one piece when facing more than two zombies. Assumedly, there would be a certain number of hits to take down a basic zombie, but instead the number of hits varies from 2 to 4, making combat that much more difficult. You don’t know when an enemy will stop running at you and finally drop, which does add to the overall sense of unease in the game, but doesn’t make it any more fun. 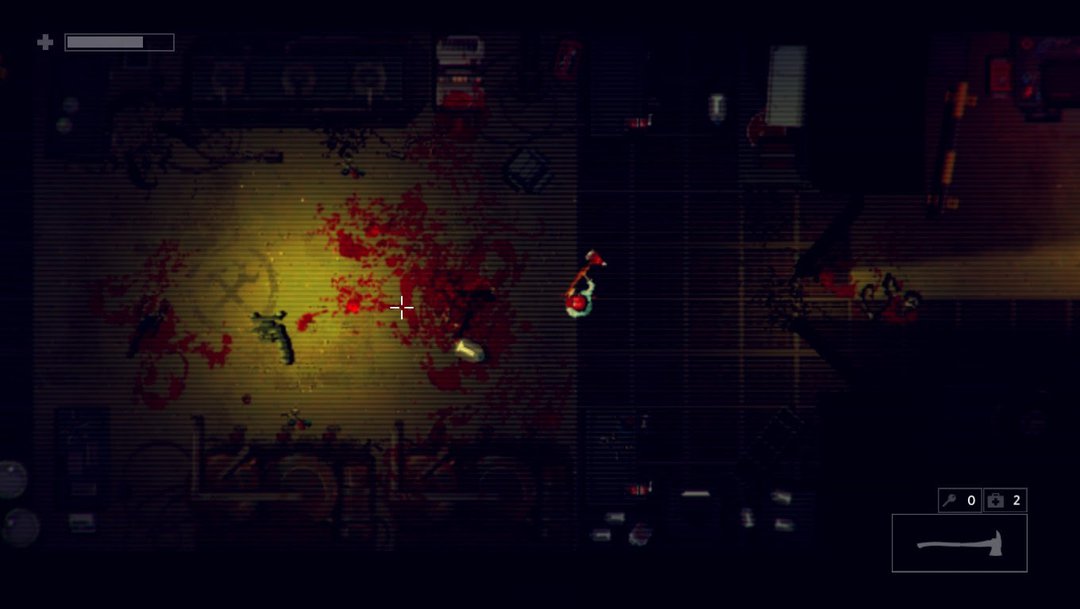 Enemies explode into a mess of gore and guts, so make sure there’s a nice even coat on the whole room.

After finding guns, all of this changes. Enemies go down after a specific number of hits, that is, if you hit them in the right place. Every hit has a chance to take a part of your enemy clean off. Just barely miss that sprinting zombie’s body? Its arm is on the ground now but it’s still running. Swipe at a zombie with your ax? Its legs are cleaved off but it continues to crawl at you. This mechanic, known as gibbing, is a small but impactful game changer that makes every encounter with the undead feel that much more unique. 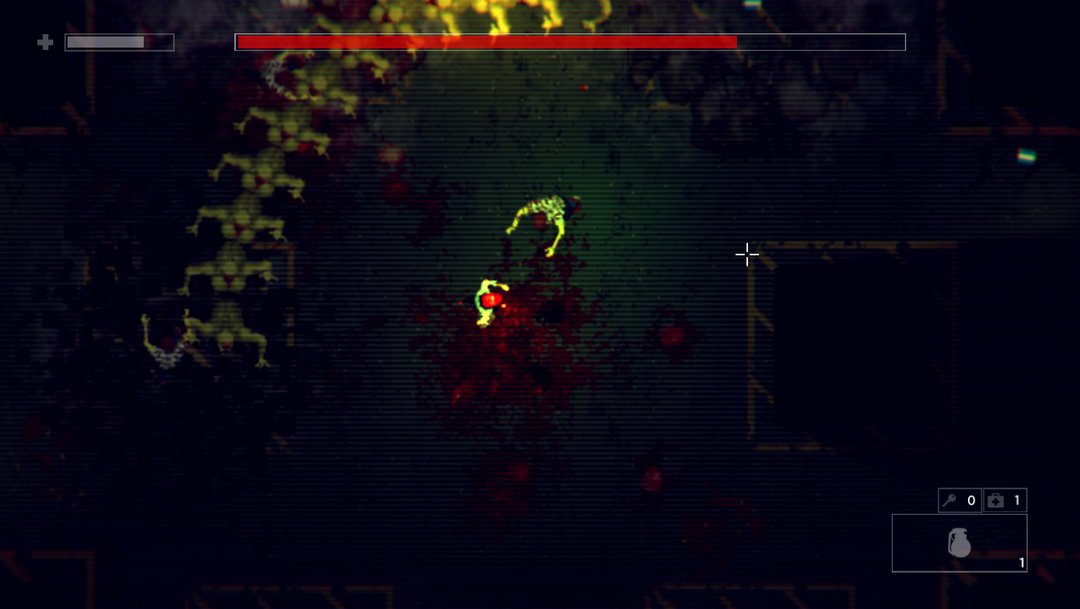 No, seriously, this boss scared me.

If that doesn’t make the game feel unique enough, there are of course the undead that come in the form of bosses and mini-bosses. Enormous, bloated monsters occupy the food courts of the garage (if it’s not obvious, there’s nothing ordinary about this place), spitting acid at Butch or spitting up feral rats to attack him. Of course there are others, but I’d rather not spoil the surprise.

Crawling out of the Rabbit Hole

Logging off after a session of Garage: Bad Trip is like snapping out of a strange dream. The game fully immersed me in its strangeness, ensnared me in its pulsing music and trapped me with its grotesque imagery and blood splattering action. Although the story is a little lacking here and there, the overall feel of the game is too unique to pass up. So if you’re someone that’s looking for an experience unlike anything else out there right now, or someone who’s just a fan of gory twin stick shooters, be sure to look into Garage: Bad Trip. Just know the whole time, it’ll be looking right back at you.