By Alton Campbell Comments Reviews
May 30, 2019 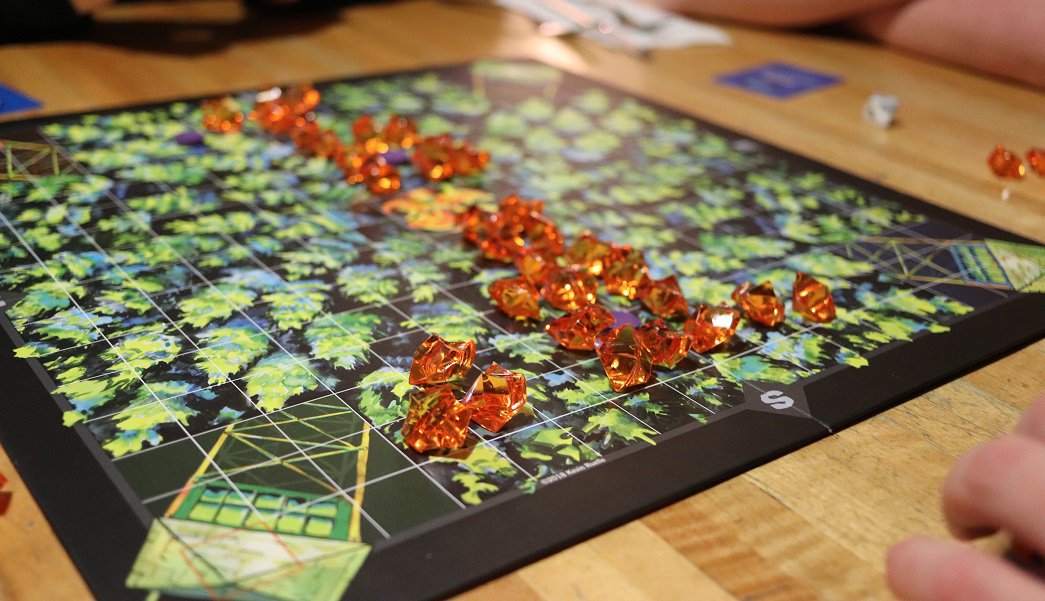 The forest below you is still and peaceful, just like so many other days. You sip your coffee from the comfy seat in your ranger’s tower as you peer out over unending, beautiful greenery. Then you see it; a golden ember gobbling tinder, rapidly growing into a Smokey the Bear terror dream. It's far away, but the wind can change and bring the blaze to your doorstep at any moment.

You panic; you realize in horror that the forest is probably beyond saving. Then something deep within your psyche snaps. 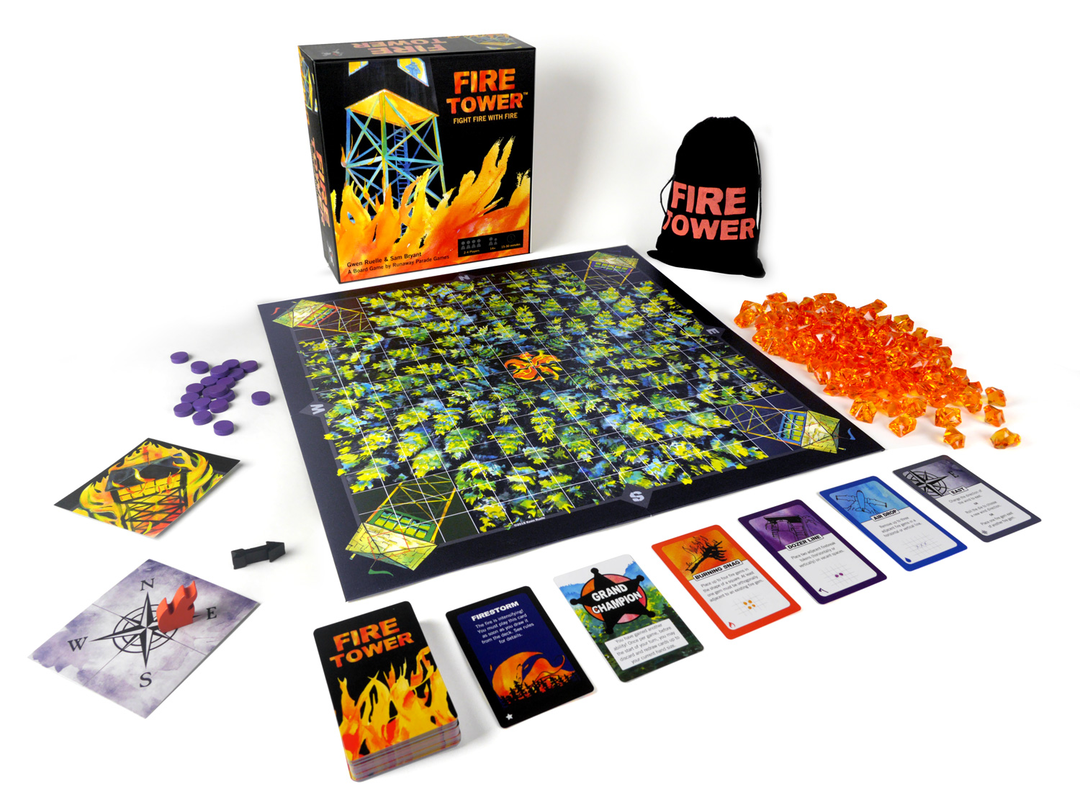 At least you’ll make sure you are the last one alive.

A NOT Co-Operative Game About Fighting Fires?

Fire Tower is board game for two to four people. It is not a cooperative game, but we’ll leave the social and moral implications of this for a different article. For now, what matters is that there is not another game quite like this one out on the market, and the theme still holds strong thanks to some fantastic art and quick gameplay.

Two to four players are each placed in their own fire tower on the corners of the gridded board, with the cardinal directions of north, south, east, and west on the sides. The center of the board is four squares known as the eternal flame. Again, we don’t know why its eternal, but what matters is that every round there will be more fire, and that you want to be the last lookout standing. 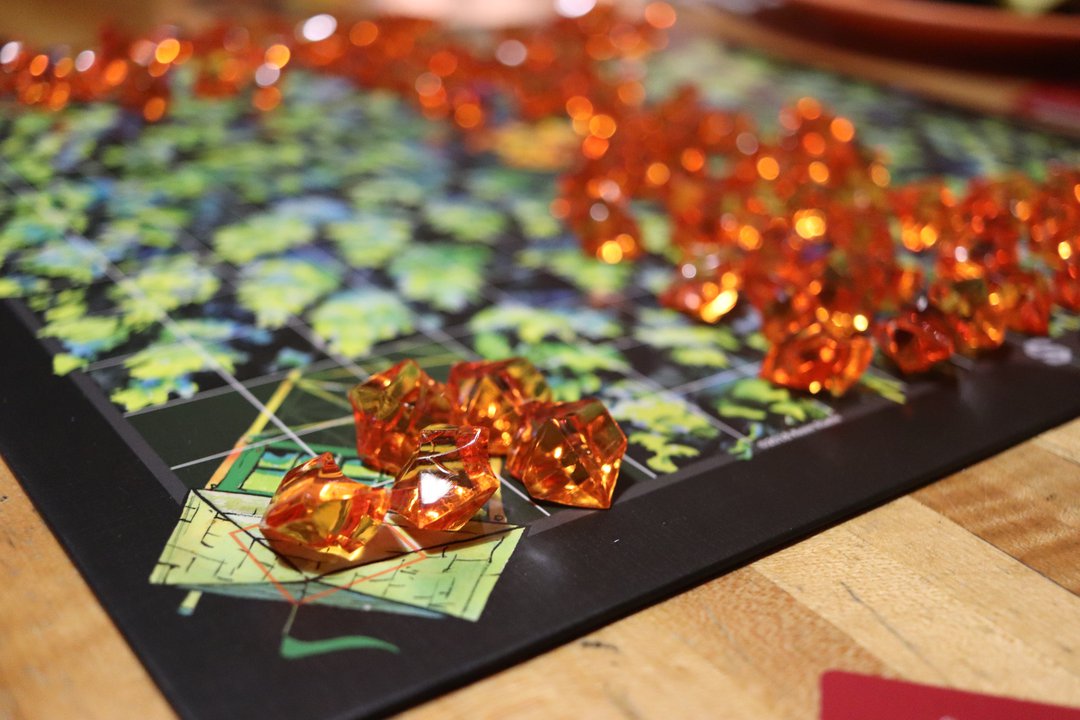 If your tower looks like this, you've lost. Also, its probably really hot.

As a general rule of life, not being aflame is a good idea.

How To Avoid Immolation

A turn in Fire Tower is very simple: first, place a fire gem on the board moving in the direction that the wind is currently facing. This makes sure the game is always smoldering, always moving towards conclusion. The fire gem (which looks amazing, by the way) is put down adjacent to another fire gem or the eternal flame, meaning that you often get a choice of where it goes, but you’ll often have to ‘help’ the fire get closer to your precious tower too.

The second part of the turn is using one of the five cards in your hand to sway the fickle flame spirits in your favor. The cards come in four colors, each useful in its own way. Grey cards for example change the direction of the wind, letting you have a little breathing room as the fire spreads in a different direction. Hopefully by the time its your turn again (especially in a four player game), the wind is still on your side, constantly adding pressure somewhere else. 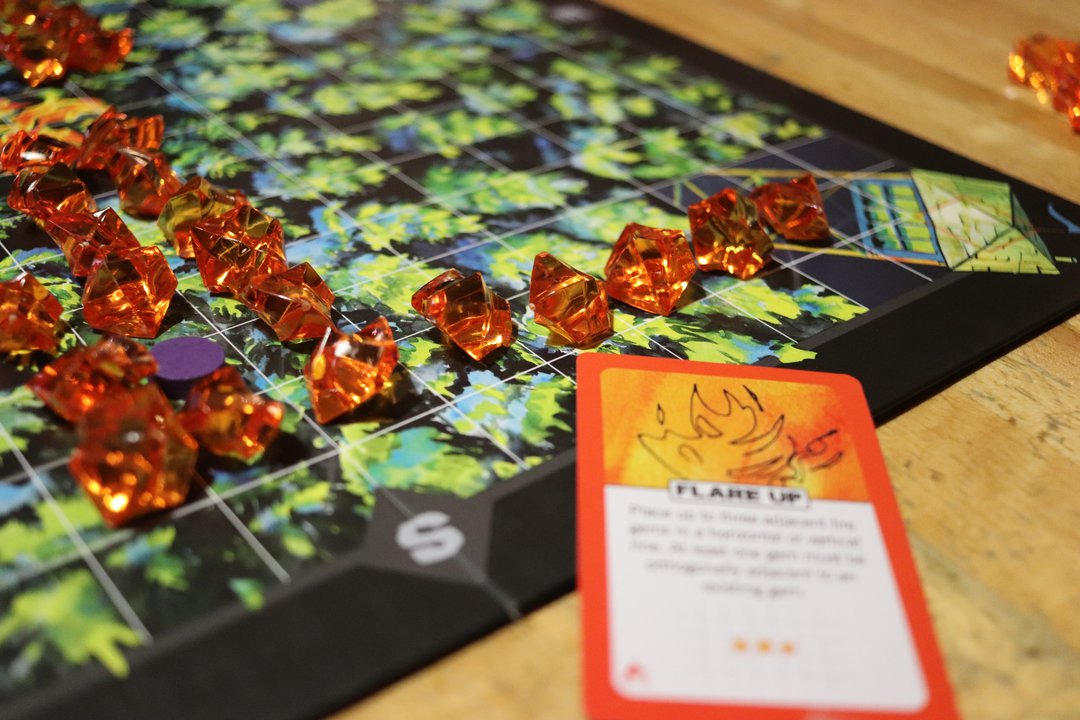 The raging fire will blossom out in all directions, but a few cards will warp it to do some specifically aggressive things - like burn in straight lines towards your foes.

There are more direct ways to manipulate the board however. Orange cards let you manipulate fire gems themselves, like tossing embers to other places on the board, placing multiple gems in a straight line to name a few. Meanwhile, blue cards represent water, letting you defensively douse a line or a square of fire gems to buy precious, precious time.

The most interesting of the cards to put down are the purple ones, which give you access to firebreak tokens. These tokens represent the hard work that firefighters and park rangers do during actual blazes: chopping down trees and clearing brush to make it so flames don’t have any fuel to move past a certain point. While you aren’t allowed in Fire Tower to place too many of these close together, firebreak tokens can be some much needed stopping power.

When Its Time To Panic

At the end of the day, the point of the game is to keep fire away from your tower, and knock other players out by setting theirs ablaze. It’s a simple premise that keeps the game moving fast with a constant sense of pressure, since everyone else is trying to do the same. Because turns are fast and the rules simple, the people I’ve played with all stay engaged with the board constantly. There are many mechanics that serve to keep the tension high. 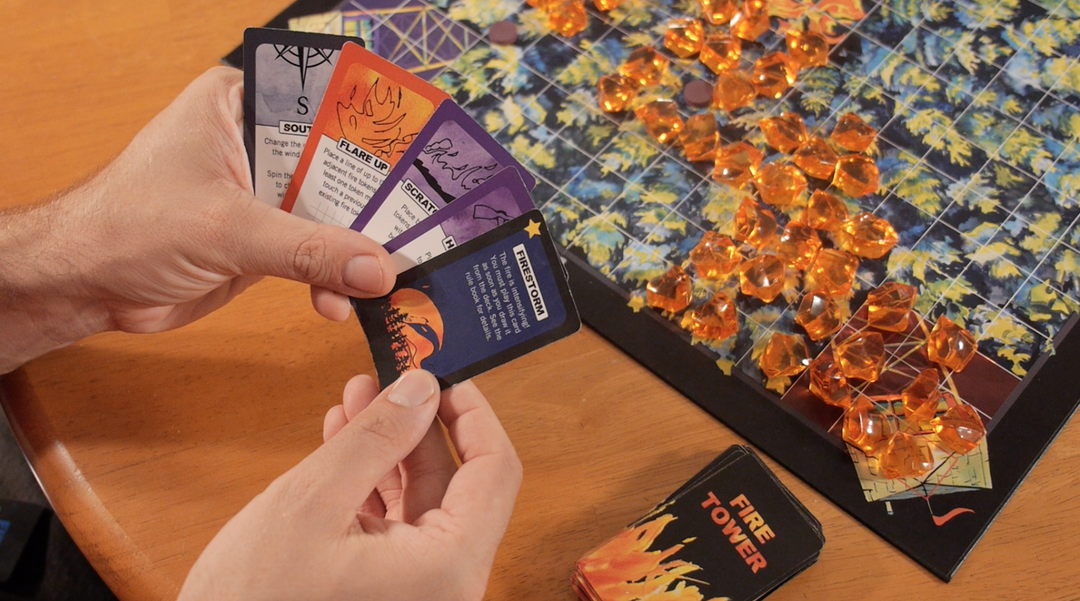 Of course, the anxiety this game produces is nothing until the first person’s tower begins to smoke.

Each player’s tower is 9 squares in the corners of the board, but the one that really matters is the final corner slot: once that one has a fire gem in it, a players watch has ended. Players usually start panicking by this point. Cards that would have saved them are now useless; an important rule being that you can’t firebreak or use water cards on your own tower. Yet all is not lost. Instead, you have a one-time use bucket that each player starts the game with to use out of desperation.

Mechanically, this is a hilarious twist to a game that already leads to a lot of laughter around the table; seeing a player’s tower get barely nicked with flame means that the game is about to speed up. What adds to an already speedy game, is that a spent bucket card becomes a new power called Reckless Desperation, letting you pitch cards from your hand to add flame tokens elsewhere on the board. More fire for everyone! A lot of games of Fire Tower end with multiple players barely holding on, eyes twitching as they try to land that final ember card to finish the game on top.

When a person's tower burns, something called a Firestorm goes off immediately and more fire is added to the board in the current direction. The exiting player is allowed to roll to choose where the wind goes next and watch as friends meet a similar fate. As an added bonus, one firestorm card is already hidden in the card pool to give players a taste of the pyrotechnics.

The Good: Frenetic, Fast, And Fun

Fire Tower has a simple language that's easy to pick up and play. Gameplay is often quick and manic, forcing the game towards a conclusion at a breakneck pace. The players feel in control of the fire, when its your turn, especially when the cards are in your favor. It's an enjoyable experience to be that powerful until it is wrested you by an opponent, all of your hard work undone as others try to keep the flames away from their own gates. 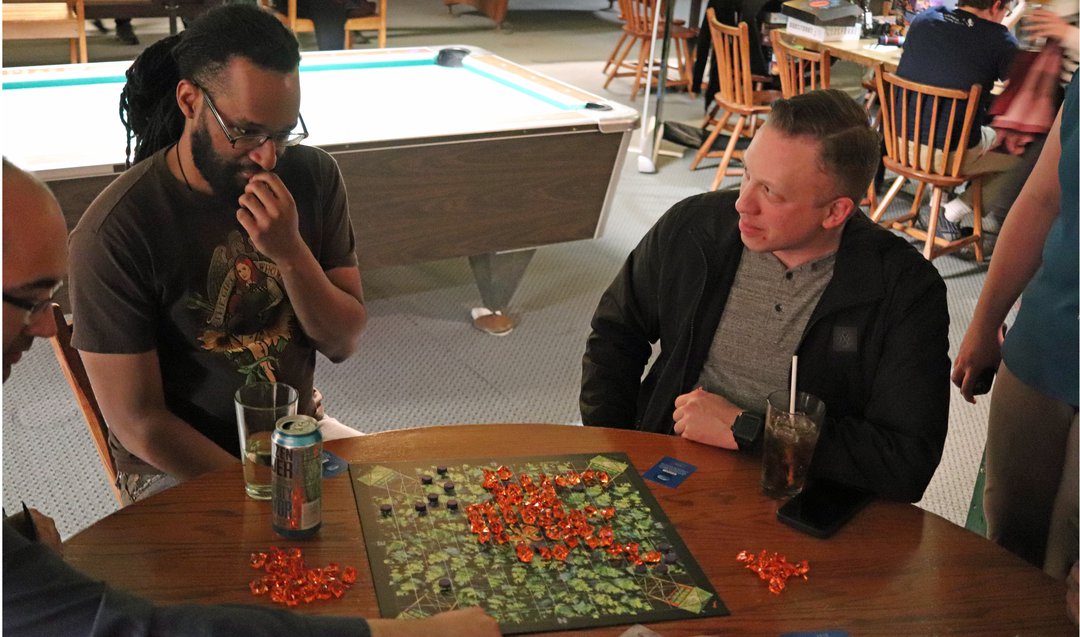 Expect a lot of side-eye looks like this when you play games of Fire Tower - and that isn't a bad thing.

My playthroughs were full of "sorry, not sorrys" as other players were eliminated. And yes, while there is elimination in Fire Tower, a funny thing happens here: people stick around and watch the game. When games typically takes 45 minutes or less, players don't seem to mind too much when they go up in flames. The art is direct, the components grab your attention, and the quick back-and-forth means the game gets to what it is trying to do very quickly. Fire Tower is just fun, plain and simple.

The Bad: Cards Are More Fickle Than Flames

Unfortunately, a game that is made to be so simple and accessible, something has to give. Here, its a sense of strategy. If you are someone that requires a game to try and make you think five or six steps ahead, you might look elsewhere. This isn't so much a negative than just a fact of the sort of game Fire Tower is.

If there is a downside, it is that Fire Tower's simplicity comes from its cards maybe too much. With an entirely random hand, the player has to use what they get, and while this is usually fine, it can cause the game to tilt severely. In my first play through, I felt invincible because of a series of lucky card draws. I got a number of fire break cards and set to work creating an elaborate and nigh impenetrable. Players had to creatively figure out ways around my defenses and most attacks were dowsed with my blue water cards. My next playthrough, I mostly pulled water cards and grey directional ones. That game had me on the defensive in a different way, no longer feeling safe in my tower. While most games only last thirty to forty-five minutes, this second game ended up going on for longer than an hour as every player never seemed to not get quite enough orange cards to launch a real attack. 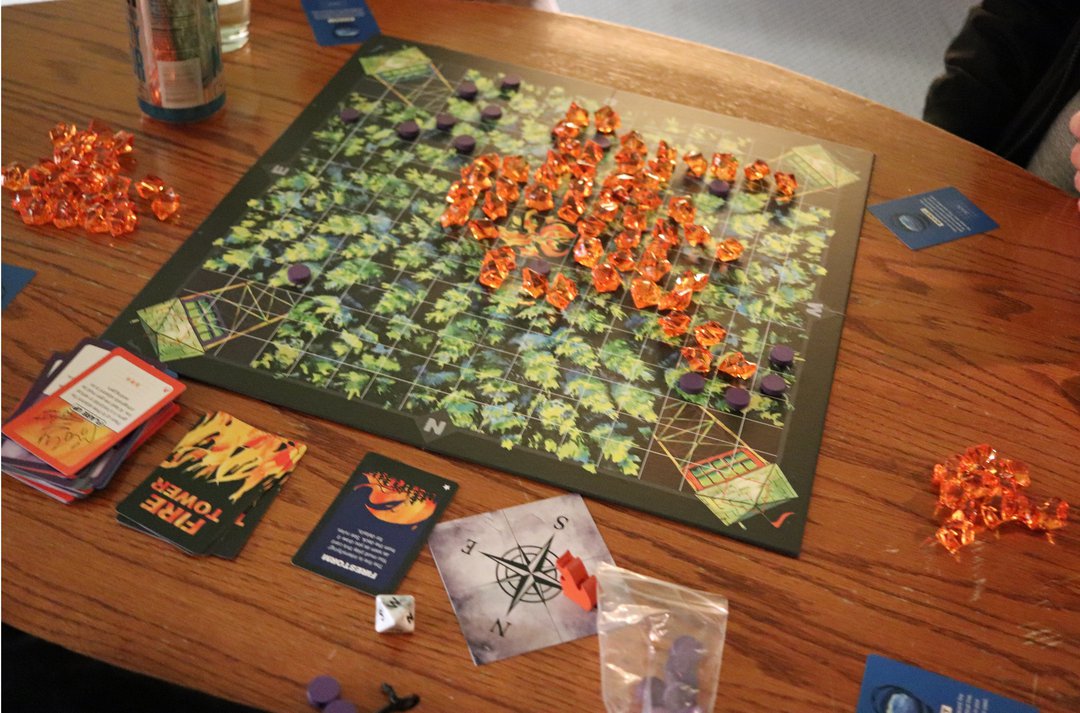 Occasionally, you'll end up with a board state where one player feels especially vulnerable or out of luck.

A player is at the mercy of the cards they pull, and in a four person game, each round you play is key. Personally, I think Fire Tower could remove about two or four of the more defensive cards from its deck to help normalize its game time to its sweet spot: fast and to the point.

Fire Tower Is A Unique Take On Competitive Play

Fire Tower is a unique game in our collection. The art direction and the style of the game make a flaming forest a beautiful experience in addition to a terrifying one. The gameplay often moves smoothly, and while it leans towards competition heavy it isn't a game that ends friendships; there can only be one and you just hope it's you. It's a fast game, good for a party-play just as the appetizers come out and finished just before the main course starts, or perhaps a way to wrap up an evening after a real brain-burner.

It's unique, comes in a great box with fantastic components, and fills a void between hyper competitive games and ones that are meant just for fun. At $49, Fire Tower is a fantastic purchase from a small game developer that's sure to make someone in your game group smile... or maybe scream in terror as the winds change direction yet again. 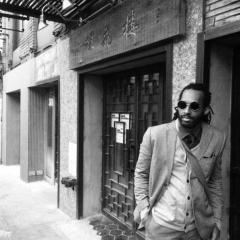 Alton Campbell normally writes urban fantasy or sci-fi in post apocalyptic worlds; If he can fit a bit of magic in a story, he's happy. Through the video games of Kojima, Nintendo and Sony have been in the fabric of his story from the time he toddled; writing about them has been a wholly new, different, and fun experience. Recently, Alton has taken a break from pixel crafted stories, becoming enamored with the ever expanding world of board games. He's been learning the language of some of the most challenging and fun games on the market with some of his closest friends. Isn't that what it's al

Alton Campbell normally writes urban fantasy or sci-fi in post apocalyptic worlds; If he can fit a bit of magic in a story, he's happy. Through the video games of Kojima, Nintendo and Sony have been in the fabric of his story from the time he toddled; writing about them has been a wholly new, different, and fun experience. Recently, Alton has taken a break from pixel crafted stories, becoming enamored with the ever expanding world of board games. He's been learning the language of some of the most challenging and fun games on the market with some of his closest friends. Isn't that what it's al