Longtime fans of my articles will know I’m a total sucker for Sci-Fi. Space lasers, cool ships, all firing off inside swirling nebulae, beam me right the heck up! So when I stumbled across Drone Swarm on the PAX East show floor earlier this year, before lockdown moved us all into the digital realm, I did a double take. A single ship surrounded by 32,000 drones. Swirling, spilling out, engulfing enemies and forming walls to shield the mothership. Oh heck yes, I thought.

Here we are most of a year later and Drone Swarm is finally out for eager crowds to get their hands on. But does it deliver? And who is it for? As ever, I’m here to help you decide if this game belongs in your library. Let’s get to it! 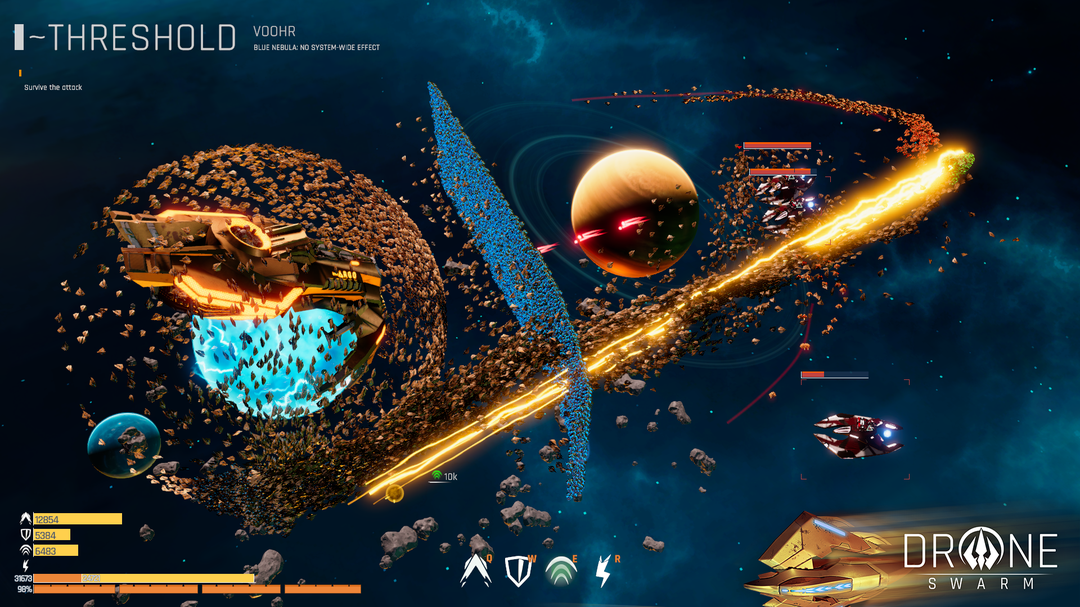 Time to get this party started, and everyone's here! All 32,000 of them! Oh yeah, and the party crashers.

Drone Swarm is a puzzle game at heart. Each level will see you jumping into a new system, and despite your crew’s best efforts to yell “STOP SHOOTING WE’RE PEACEFUL,” everything will start shooting anyway. You will defend your ship with a myriad of drone powers, triggered by clicking or drawing on the screen with your mouse. At first you only have the ability to draw walls (for blocking shots) and other pathways (for ripping enemy hulls to pieces), but you’ll quickly unlock more. There are new powers such as one that lets you push objects around, whether they like it or not, and upgrades to existing powers like slowing down ships that try to move through your walls.

Did I mention slowing ships down just now? That’s because this game is played in real time. Enemies will warp in and begin attacking based on their standard patterns. Different enemies will naturally attack differently, some preferring to zoom in as close to you as possible, others circling steadily while firing, some charging up and absolutely wrecking you if you don’t disrupt them first. You’ll need to prioritize the big threats and manage how you mitigate others, wiping them all out before they drop your hull to zero. In a twist, though, those 32,000 drones I mentioned are limited. The more walls you draw, the shorter the lines of attack you can make. They must travel out to your drawn lines, as well, so draw too many long lines too far away from the ship and you may find yourself at the mercy of other threats, your drone supply dwindling. It’s a lot to take in at first, but the game eases you through with a set of tutorial fights, making sure each element is added one at a time. Before you know it, you’ll be shredding foes to pieces with the power of your drone fleet! 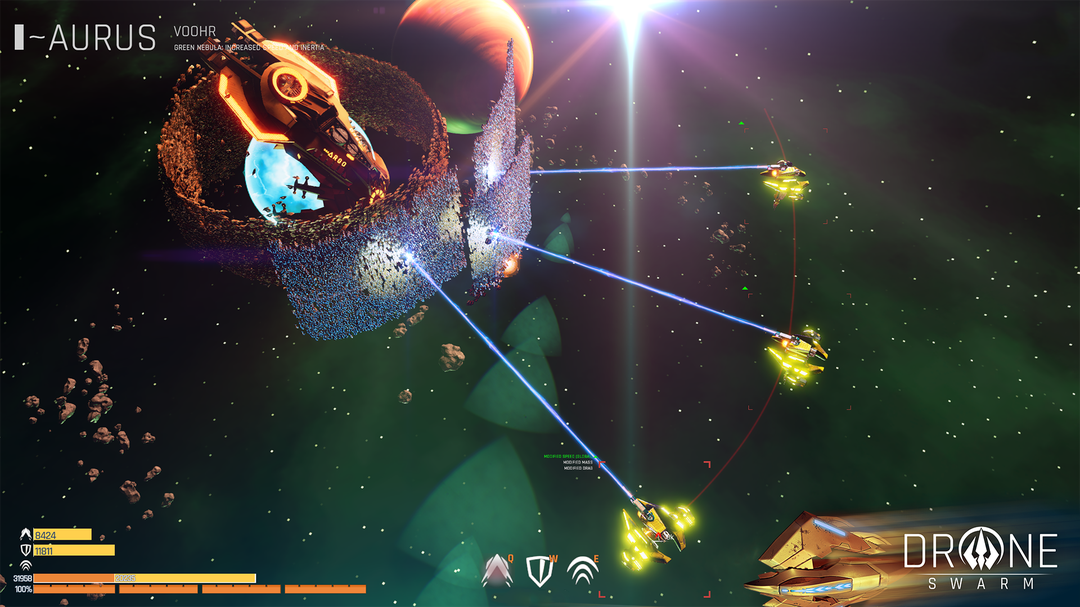 I like space lasers more when they're not pointed AT me!

More Than The Sum Of Its Parts

I went into this game expecting a slew of intense, real time, well designed puzzles and that’s exactly what I found. Of note in talking to folks at PAX, the drones are programmed in a really cool way so that, even though they’re coded as the complete shapes you draw, they all act like individual objects when commanded or struck, leading to some spectacular visuals. What I didn’t expect to see was a graphic novel style story being told between missions in some truly well drawn visuals and solid voice acting! Yeah, there’s a story to Drone Swarm. While it’s your standard Sci-Fi, end-of-the-world fare, it’s no less entertaining to watch unfold. Honestly, while I didn’t expect this part of the game, I’m glad to see it.

The story itself is nothing particularly special. Humans were nearly wiped out by a threat from space. They overcame it and got a fancy drone ship out of the ordeal. The characters are all familiar archetypes with a similar brand of space cockiness. Everything else in space still hates them, and so they fight for survival with their OP ship, classically named from Greek lore. You could probably check out any number of other Sci-Fi games or shows, pull out all these elements, toss them in a blender, and get what you find here, but I find I don’t actually care. As something to frame the game and break up mission after intense mission, you need this story. The game would definitely be empty without it, and standard as it is I still found myself growing more attached to the characters as we completed each mission.

You will want to push through more missions to see what happens on this space epic, and that’s no small thing. The devs were very smart to make sure the story comes through strong with its voice acting and art direction. It’s no mere afterthought, and the way it drives the game helps ensure it is greater than the sum of its parts. 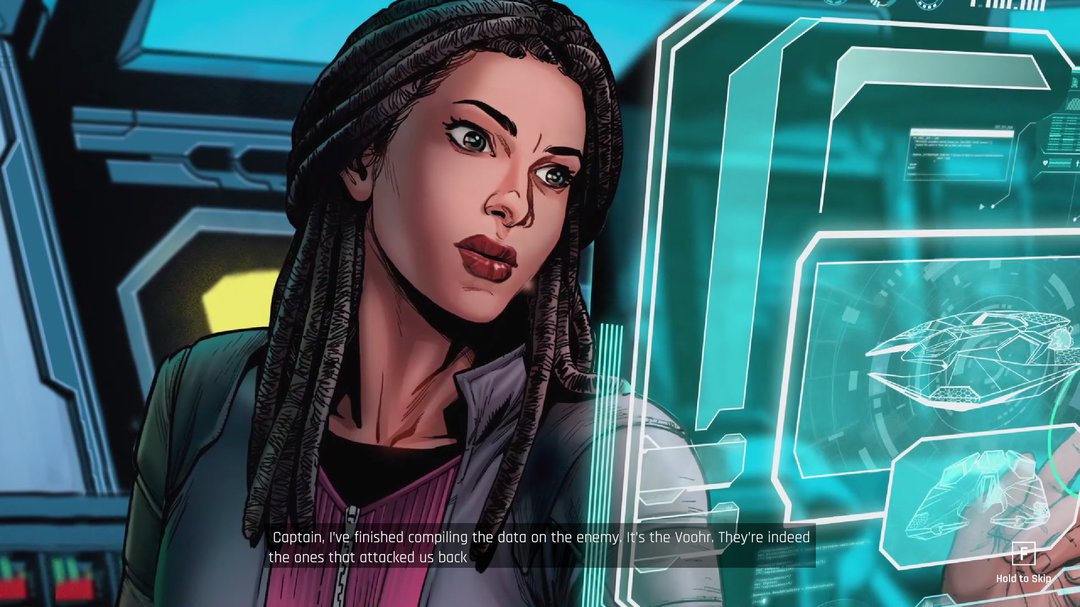 The story cutscenes have a very graphic novel feel to them and are very well rendered!

It’s hard to say much more than this about Drone Swarm without getting into spoilers, and the gameplay itself is very straightforward. If you’re liking the look of this game, then by all means I encourage you to go and give it a try! But if, like me, you’re still just a little bit apprehensive about whether this game is a good fit for you, consider a few of the following points.

The first thing you really need to weigh is the difficulty, but not perhaps the difficulty you think. While this game starts out simply, it will very quickly ramp up. You’re going to be expected to defend multiple different attacks, from different weapons, from different angles all while retaining enough drones to mount an offense back at the same time. Can you stop the incoming missiles, prioritize the laser enemies that are carving through your drones, and tie up the giant lasers ships that will three-shot your mothership if you let them? Really, the crux isn’t so much that this game is tough but rather that the game is real time through all of this. Do you see yourself getting frustrated by slow or sloppy play? As a reminder the drones have a travel delay from the home swarm, too. What you draw on the screen will need to anticipate enemy movement as well as not be off-target if you intend to hit anything. When you make it work, it’s a truly epic sight to behold. But you will get it wrong a lot in the process. Trial and error, along with watching your ship implode, await you in no small measure. Gauge your frustration levels because there’s nothing here in these times but you and the game. You can always back out to the star chart and try a different system, but this is ultimately a puzzle game. Unique visuals aside, this is what you came for.

That bigger point at work here, again, is that this game is real time rather than turn based. This is my major point to consider and really cannot be understated. For what it’s worth, the entire way this game is made hinges on the challenges being real time, and I think it works really well. But for some, that’s a game changer. I intentionally don’t play RTS games because I’m objectively terrible at managing wargames without an “end turn” button. I still had fun with Drone Swarm but I appreciate your mileage may vary. The levels are ultimately on the shorter and more intense side, and I think that has everything to do with it. I don’t spend an hour playing a level only to die at the end. If you blow up, you can load in again and give it another go. Your light year mileage may vary, though. If real time games just aren’t your cup of space tea, you may want to check a few gameplay videos to confirm your purchase first.

Of note, there were also a couple of bugs I encountered while playing. Pretty standard stuff where an enemy ship occasionally glitched and froze but also couldn’t be destroyed, necessitating a replay of a level I’d nearly beaten. A little frustrating but nothing game breaking, and something I’d expect may even be patched out by the time you read this. Just be aware you might occasionally need to repeat a level. Enemies will at least follow the same patterns in a level, so you can learn and repeat your good strategies once you find what works. 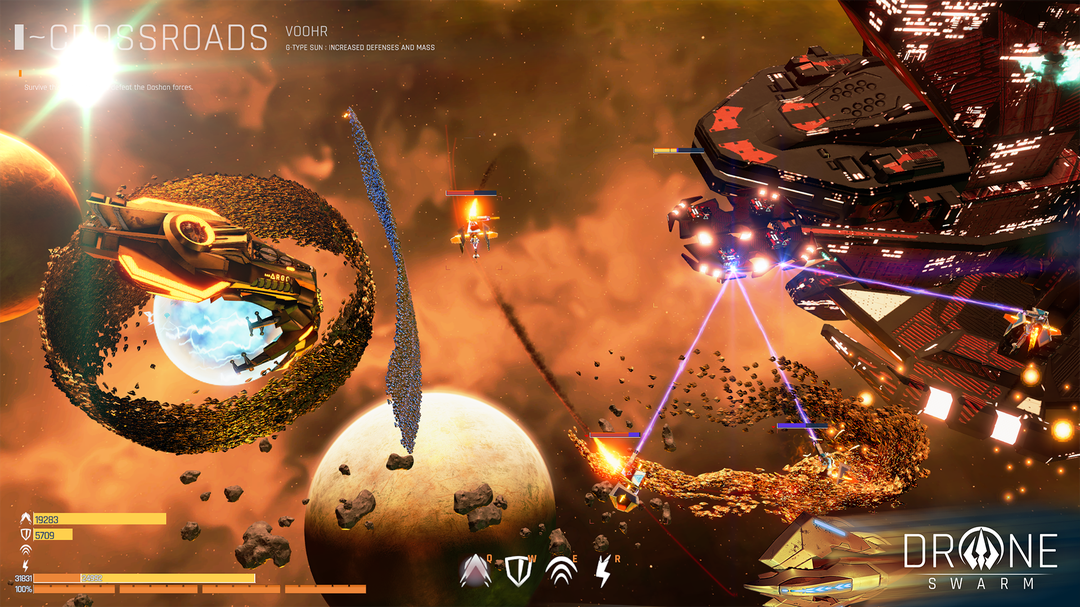 Some battles are truly epic, with multiple foe types fighting each other as well as you. Prioritize your first targets wisely!

Bringing It All Together

Drone Swarm is unique, and if you know me by now you know that novel concepts always grab my attention. I’m always looking for something new or strange, from the devs’ minds to our gaming rigs and consoles. Games out there these days can sometimes seem like a—well a swarm of clones with small little twists and takes on a formula. Drone Swarm on the other hand dives into the deep end, rendering up a cinematic challenge that never gets old to behold. When I said that the story drove me from level to level, I was actually half lying. Playing newer, harder levels is also an excuse to see even more drone theatrics! As you accumulate more powers and mix them up against the foes you face, you’re treated with even more spectacular shows. If you enjoy puzzle games, especially with a dash of graphic novel cutscenes between the action, I will leave you with these final words: Thirty-two. Thousand. Drones. Still interested? You should support these developers and go give those drones a whirl!