Jason Anarchy Brings Us Another Round of Drunkards & Dragons

If there was ever a time for epic adventures and plenty of booze, it’s now. With most of the world still locked down by COVID-19, people need an escape, and the sixth installment of Jason Anarchy’s Drinking Quest series promises exactly that.

If you’ve played any other Drinking Quest game, then you pretty much know what you’re in for with Old Habits. As the name might suggest, it doesn’t bring a whole lot that’s new to the table, but if you enjoy the series then this one is worth picking up to continue your adventures. 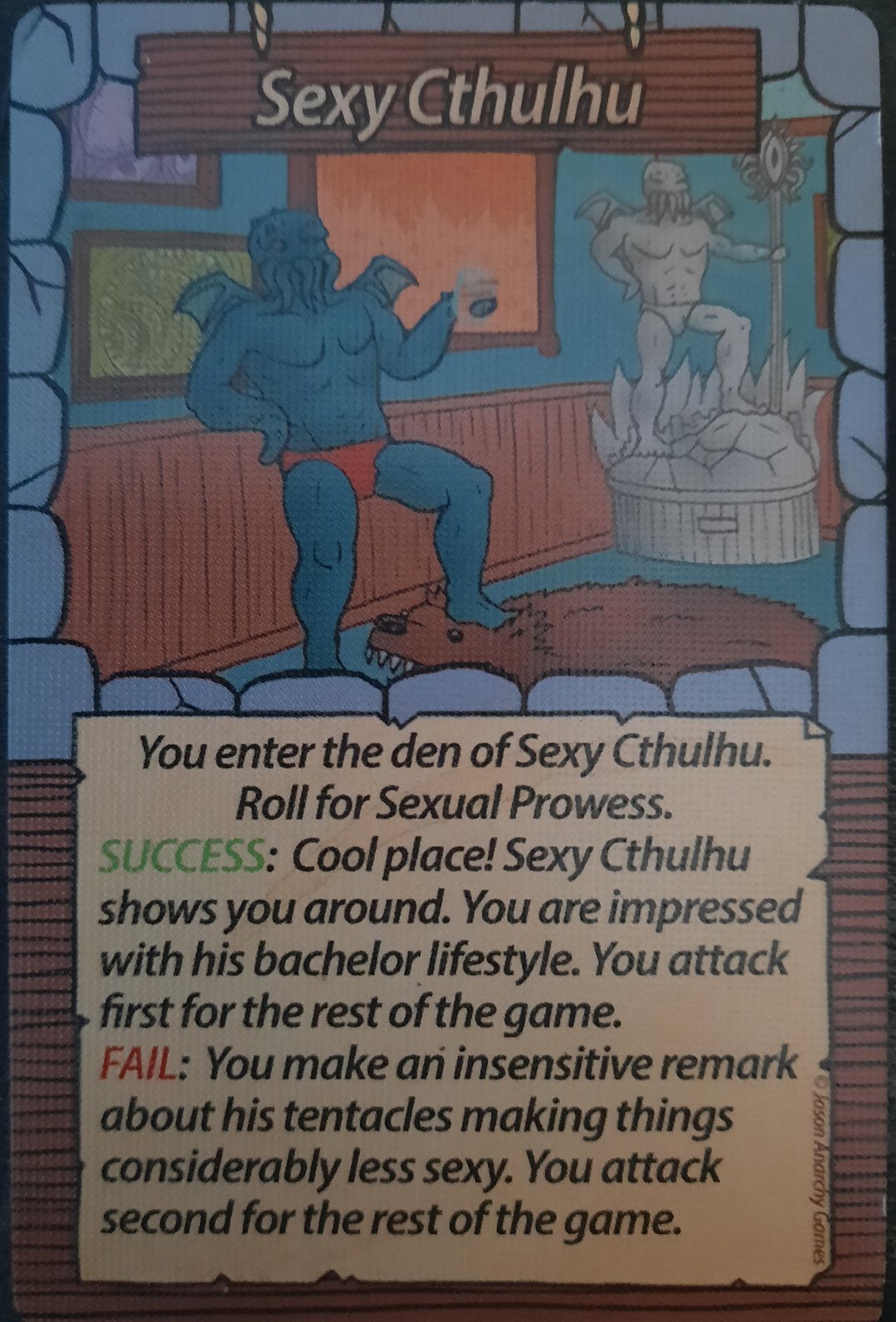 This was the first thing I saw after opening the box - Drinking Quest lets you know right away what kind of a game you’re in for.

Drinking Quest is a rules-light card and dice RPG that feels sort of like Munchkin and Descent got drunk at a party together. Up to four players each pick a hero like Chuglox the barbarian, Daiquirin the wizard, or Annoying Sidekick the annoying sidekick. Each hero comes with a unique statblock and a signature drink - powerful abilities that can generally be used once per quest.

According to the designer, it is possible to play Drinking Quest with more than four players if you’ve got enough hero cards (such as the bonus heroes from the Kickstarter rewards), but it tends to make for long turns and a rather clunky experience overall. There’s also a variant rule where two players share each character, so if you’ve got a big group you may find that’s a better option for you.

Each game of Drinking Quest is broken up into four quests, and Old Habits comes with optional bonus quests that go before and after the main game. As you progress through the game, you’ll be able to get better gear and your stats will get raised and lowered by various (hilarious) effects. This kind of progression should feel familiar to anyone who’s played Descent.

Munchkin shows its face both in the humor and the gameplay loop of Drinking Quest - although Drinking Quest avoids Munchkin’s infamous endgame pile-on. Each of the quests in the game is represented by a deck of cards, which players take turns drawing from. There are two types of cards: effects and monsters.

Event cards will generally force you to make a saving throw based on one of your stats. If you pass, you get some kind of bonus. If you fail, you get a penalty - usually for a silly reason, like getting caught in a recursive loop of item pouches.

If you draw a monster, you have to fight it! You and the monster each have attack stats based on a die roll, and flat defense stats that reduce incoming damage. You’ll trade attacks until one of you drops.

If you win you’ll get some gold to spend at the shop, as well as some XP, which is the win condition for Drinking Quest. If you lose, then chug your drink to bring your character back to life!

(Note that you can choose not to drink at any time, so you can bring your character back without drinking if you’ve had enough - more on Old Habits's safety features shortly.)

The game ends once your group makes it through the last quest - either the fourth regular quest, or the bonus quest if you’ve chosen to play it. Once the last card is resolved, whoever has the most XP wins. 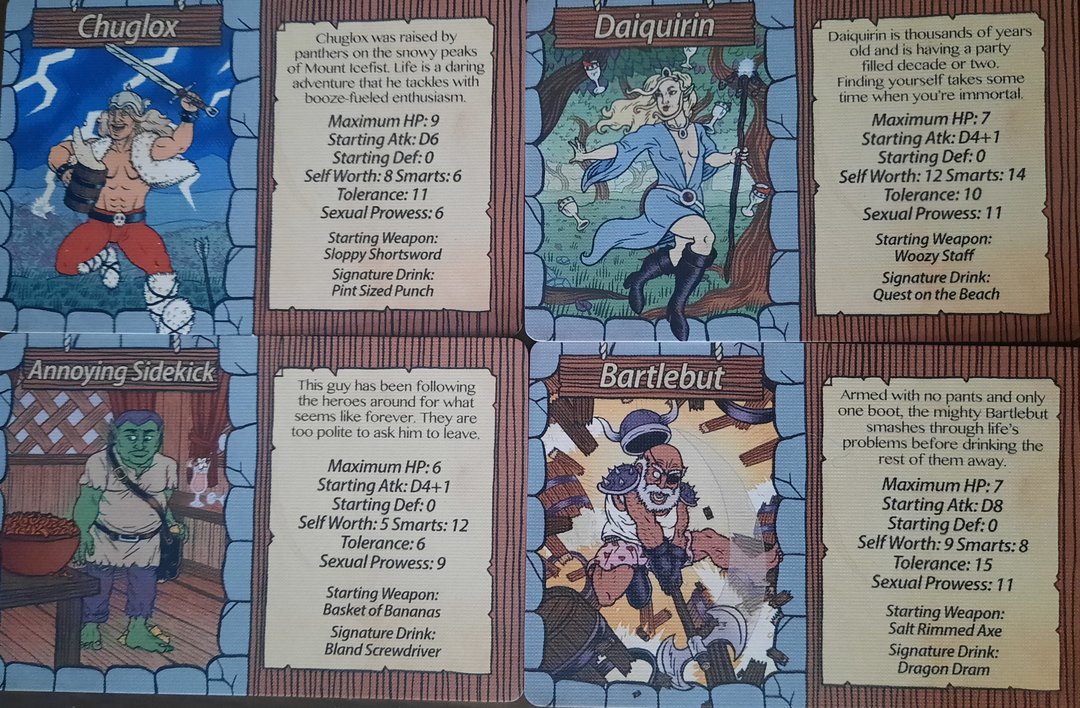 But if you’ve had fun playing and drinking with friends, then aren’t you all winners?

And… that’s it! Those few paragraphs are basically all the rules to Drinking Quest. It was clearly designed with simplicity in mind - simple enough for casual board gamers to grasp while they’re a little knackered.

Of course, any drinking game naturally raises concerns about safety. Will you make yourself sick? Will people cause uncomfortable situations? How will everyone get home? To its credit, Drinking Quest: Old Habits is aware of these issues and addresses them as well as it can.

First off, while the game was obviously designed with alcohol in mind, it's not required. In fact, it’s written straight into the rulebook that players may choose to drink nonalcoholic beverages, and can decline to drink at any point with no penalty. Aside from those suggestions, there’s also a hard-and-fast rule that no player may chug more than once per quest - additional chugs are replaced by three sips.

There’s also an optional variant rule for non-drinkers. It makes those players chug lots of water instead, and take a small penalty every time they go to the bathroom, so they still have some stakes in their characters getting killed. It’s not a perfect solution (peeing is not as much fun as drinking), but it’s a nice gesture to include people who can’t drink alcohol, or just don’t want to. 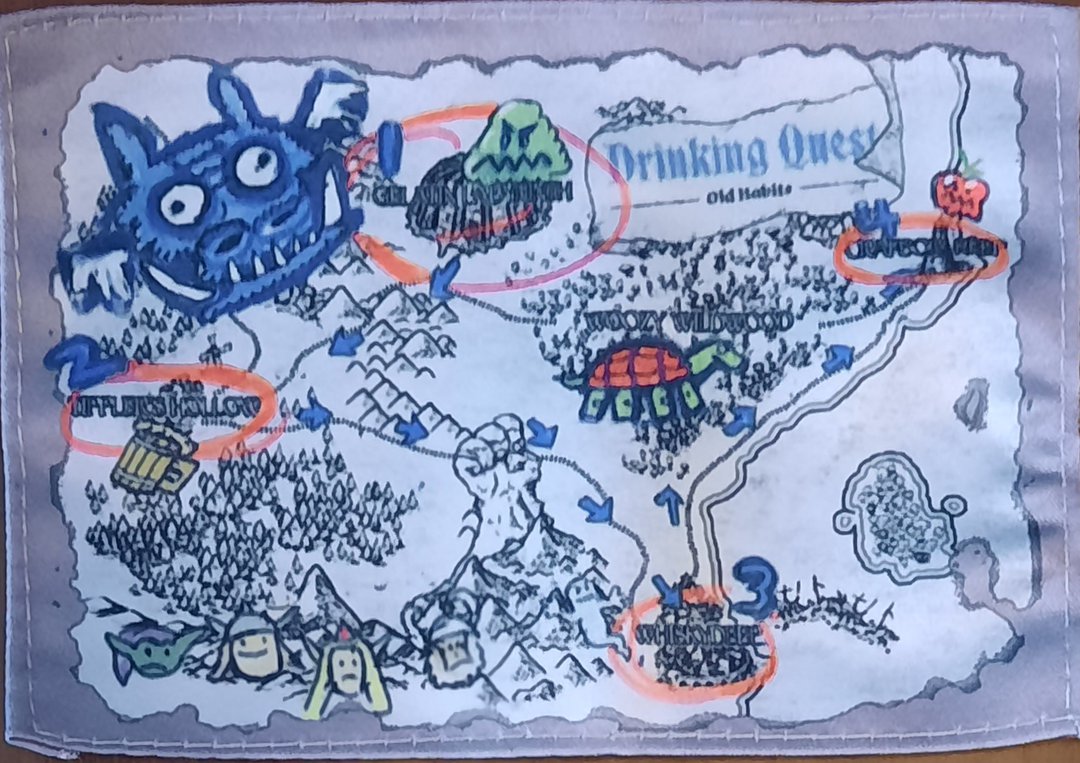 For a nice touch, the box comes with this little cloth map of the kingdom of…uh…do we even know what this place is called?

Second, before play begins, each player must tell the others their plan for getting home safely - yes, that’s an official rule! Any player who drives drunk is not only breaking the law, but also the rules of Drinking Quest.

Unfortunately, no rulebook - however well intentioned - can stop people from causing problems, especially when alcohol is involved. If you decide to play Drinking Quest, please choose your gaming group and location carefully.

One Problem: The Rulebook Is Drunk and Disorderly

The rulebook for Drinking Quest: Old Habits seems designed to be nonthreatening. It’s small and thin enough that you can easily read through it in a couple of minutes. If anything, it might be a little too small - the book could definitely stand to have an extra page or two to explain some things more explicitly.

The two major things I noticed were that the actual mechanics of combat are labeled as an example, so it’s easy to overlook that section when skimming the rules. The second is that the book doesn’t explain anywhere what the symbols on the cards mean. Most of them are pretty self-explanatory (the axe is Attack, the shield is Defense), but there’s no way of knowing that the mugs of beer represent XP until you compare the monster cards against the character sheets. 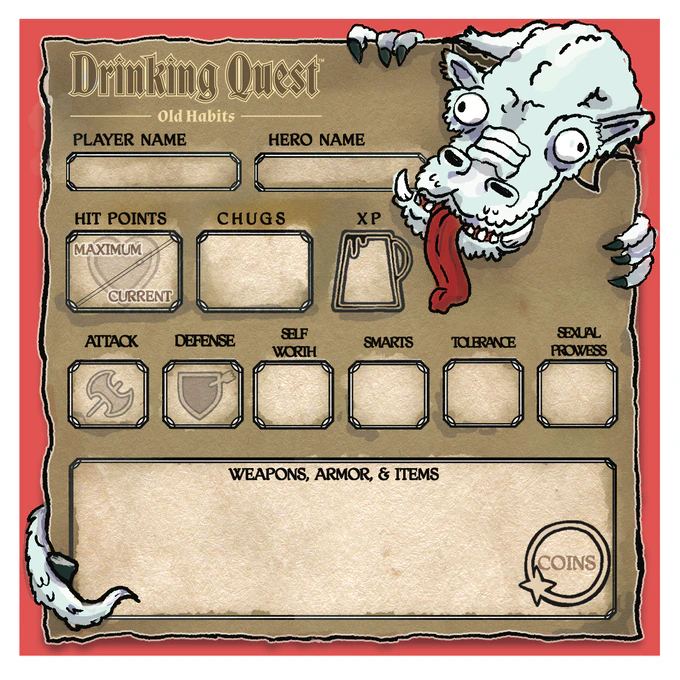 Your character sheet keeps track of everything you need to know about your hero.

Now, this is hardly a dealbreaker, especially for such a light game. However, if you’re not very experienced with board games, you might have trouble finding the rules you’re looking for - especially if you’ve been pregaming.

In summary, allow me to provide my thoughts in the most appropriate form possible: a wine tasting.

Drinking Quest: Old Habits is a familiar but fun experience, one which would easily fit in at almost any friendly get-together or casual game night. It’s slightly muddled on the nose, but quickly resolves into a light and smooth affair on the palate. The game features strong notes of Munchkin, with shades of Descent providing a more grounded counterpoint to round out the flavor. The finish is simple yet satisfying, with a pleasant aftertaste that leaves the player eager for the next opportunity to open the box.

Drinking Quest: Old Habits and the rest of Jason Anarchy’s games are available at DrinkingQuest.com.

For another game by the same designer, check out Wyatt’s review of Pretending to Grownup!