How To Make Dice Sexy Again 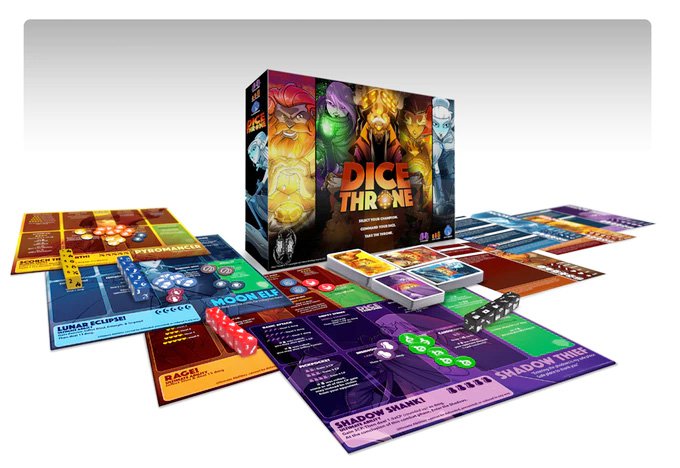 Let’s be honest: dice have gotten a bad rap over the last decade of board gaming. Randomness? Attack actions that are decided simply on luck alone? Many games in the last year eschew dice entirely, priding themselves in removing all forms of randomization, trying to make their board state feel as though it were entirely about skill.

Dice Throne is not alone in its pushback against this wave of numbers-rolling animosity, but it is perhaps one of the strongest cases. Created with simple premise, simple concept, and gorgeous execution, Dice Throne attempts to get back to the heart of what games are about: letting your hair down and having some fun.

The Premise: Today’s A Good Day For A Lethal Tournament

The story of the game is incredibly simple, and harkens back to a formative video game for many: Mortal Kombat. Every year, there is a tournament held where the best fighters are given a chance to take the throne, fighting their way to the top. While it seems as though no one but the king ever wins, the tournament goes on regardless, as the many hopeful kings and queens struggle at a chance for true glory. While the 'mad king' never appears in the game itself, you play as one of those struggling to the top. 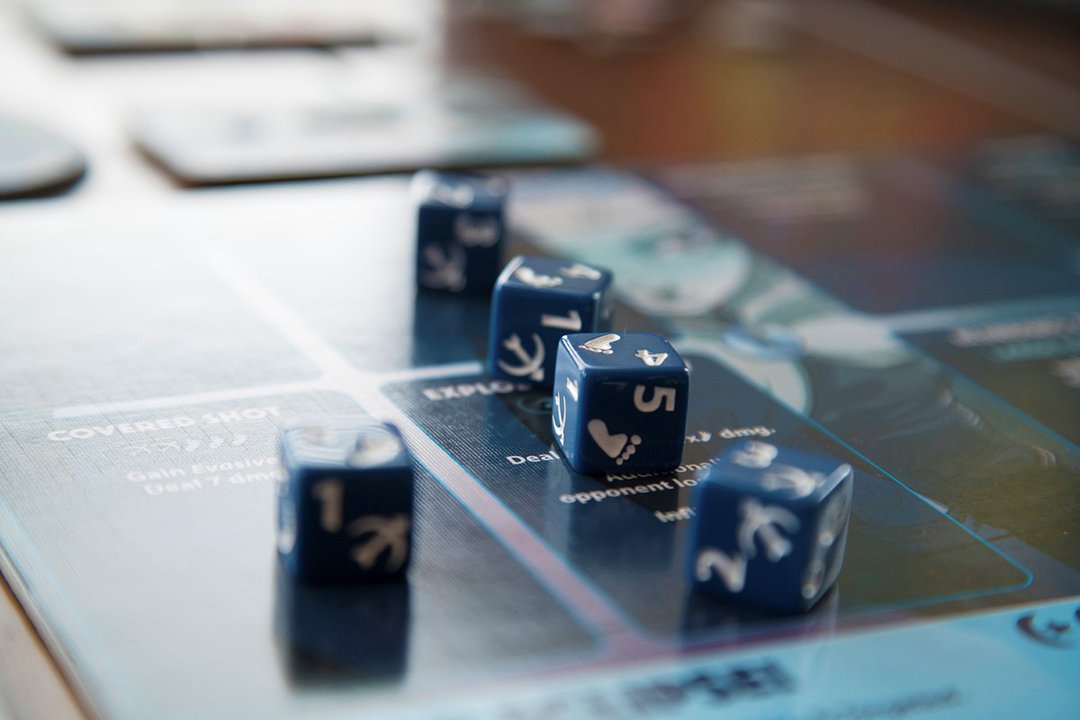 This struggle takes the form of rolling dice to murder each other. The phrase we've used at Sprites and Dice to summarize this game is 'Combat Yahtzee', and that is still a great working description. You pick one of six heroes that comes in this base game to play as, grab their five hero-specific dice, and take turns trying to attack each other. When you roll your five dice, you compare the symbols and numbers you roll to your heroes playmat, which has their various attacks listed. If you are playing as the Moon Elf, for example, rolling a bunch of 1 and 2s lets you fire your longbow for raw damage. This is good of course, but this is where I might choose to reroll a certain amount of dice - which I can do twice on my turn - to try and get different symbols for various effects. I might gamble for a combination of numbers that applies status effects, slowing down the opponent and giving me the chance to dodge in the future. Or I could always go for rolling all 6s, to try and unleash my ultimate attack.

There's more to the game than just random dice rolls of course, and this helps balance out the luck of the game: each character has their own deck of cards, and a set of combat points. Some cards give you utility effects that let you manipulate your own dice...or your opponents. Other cards might upgrade attacks, letting you chance your character's playmat in the hopes of landing stronger hits. While many cards are identical, each character certainly has their own tricks up their sleeve. Every character can also manage defensive rolls, but the Moon Elf will try to dodge damage, while the Barbarian will just try to heal his way through the pain. Deciding who you go into battle with will make you choose your playstyle.

The Good: First Impressions Are A Doozy

One of the first things you realize about Dice Throne is how good the production quality is. For being the first game created by Mind Bottling Games, its astounding how well put together the box is. Each character has their own dice with their own symbols, their own status effects, their own life counter, all themed to that particular individual. To top it all off, these components can all be sealed in their own small tray, making it a snap to pull out a character and be set up for a game in seconds. 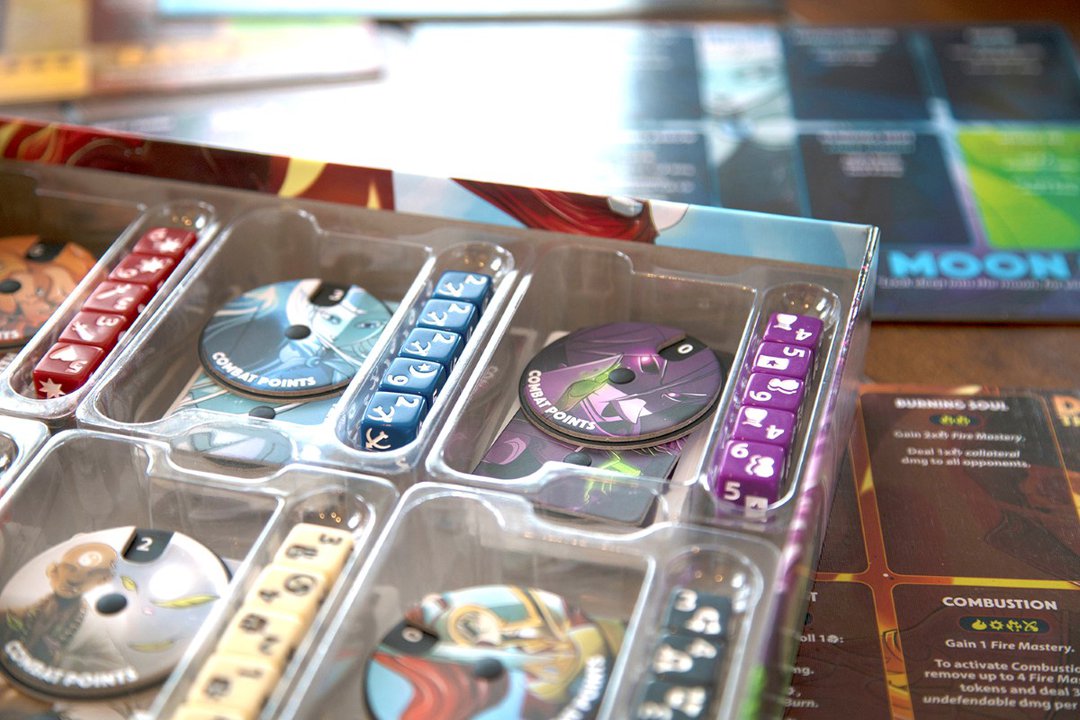 Bring this game to a group event, and I promise you that someone will come over and ask what you are playing, just because how nice it all looks.

The second major positive point going for Dice Throne is the art: in the last few years of board games, the amount of content being produced has soared. Standing out from your competitors has become more and more important, and fortunately for Mind Bottling Games, Dice Throne excels in this catagory. The bold, bright color palette, the choice of using a comic-style set of portraits and plastering it over all the components comes together fantastically. Sometimes its hard to make a dice game feel thematic, but the production values really give you a sense of character. Even though everyone is just rolling five dice to score hits, the Shadow Thief is rolling dice that are covered in poison bottles and daggers, while the Monk is rolling dice covered in martial arts fists and eastern esoterica.

Finally, Dice Throne is fun. It takes the idea of gambling and raises it to a place that makes sense in a game like this. I've had a chance to play this game over two dozen times, and there have been many rounds where I have taken a sure-fire hit and risked it all just to score that extra bit of damage. Dice Throne goads you into pushing your luck, and the intensity of the game is because of the feeling of direct competition with the others playing. There's a thrill in knowing every round can swing who is in the lead, and when your gamble pays off, there is no better feeling. It's a refreshing change of pace from many other games; because standard games can last only twenty minutes, I don't mind just going all in, just to see if I can. It is a game that has decided the thrill of adventure is more important than anything else.

The Bad: The Tournament’s Not For All

Of course, the positives of Dice Throne's gameplay can quickly become its negatives. In a standard one on one fight, each player has fifty health. While this might seem like a large number, in practice it is not. I've found myself in single digits of health after only five rounds of gameplay, just as I've gotten a chance to feel as though my character is ready to play. Upgrading your basic abilities is fun, but I've found myself unable to use this new powers because the game is over by the time I've had a chance to find them and equip them. This game does not pull punches, and sometimes, it detracts from what some of the characters are capable of doing. 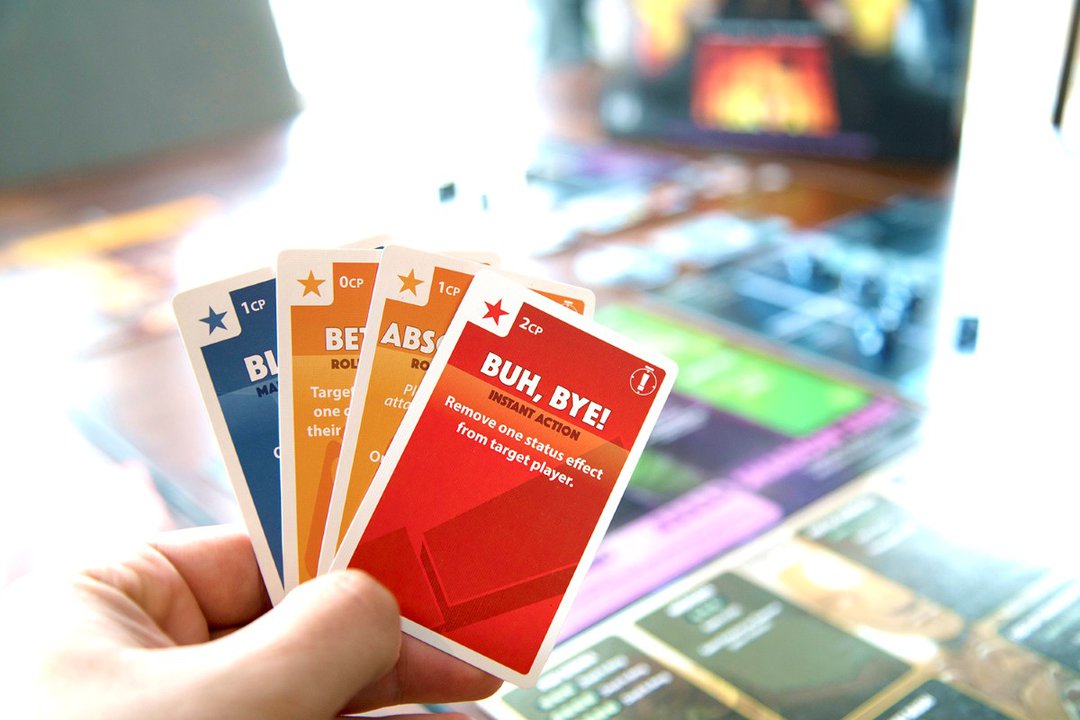 Related to this is the obvious issue with most dice games: balance. Dice Throne is a game that loves a thrill, and leans into the ability to risk everything on a few dice. Because of this, no one is going to consider the game completely balanced. While you can obviously use your rerolls strategically to try and get the attacks you want, these choices can be educated guesses rather than set strategies. Some characters like the Pyromancer do well when they spend a round or two building up status effects before using them all in a grand round of carnage. However, it can be very frustrating when you spend two or three rounds never able to actually get that final attack off no matter how hard you try. While there are cards to help give you more options, the cards you get are random as well, sometimes compounding the chances of watching a win go up in flames.

The final complaint is a small one, but might be a deal breaker for some. Dice Throne comes with six champions in the box to play with, and each has their own distinct feel and style. Having this many heroes may make you think it is a great game for many friends, but on closer inspection, the manual suggests that the game is only balanced for 1v1 or 2v2 matches. Once you have more than one opponent, the standard rules state that you must randomize your target before you attack. This might make battle royales feel more chaotic and crazy, but many find this to be a buzzkill. Dice Throne is certainly fun one on one, but I am hoping future versions of the game find a way to make multiplayer more effective.

Dice Throne is not for everyone: it is a game that revels in its randomness and celebrates the wild swings of fate. You will lose many games due to having a round where you did absolutely nothing wrong besides having bad luck.

However, for every game you lose in this way, there will be a game where you manage a stunning victory, turning what appears to be clear defeat into triumph. You will be able to manage, using educated guesses and collected cards, to activate your ultimate skill, and laugh maniacly as you destroy your foes. Dice Throne is a game that isn't about skill, but instead about figuring out how much you are willing to gamble to score the big points. There's a rush to playing this game, not unlike when you put down all your chips on the blackjack table or roulette wheel, and you have to lean into that rush to really enjoy playing. 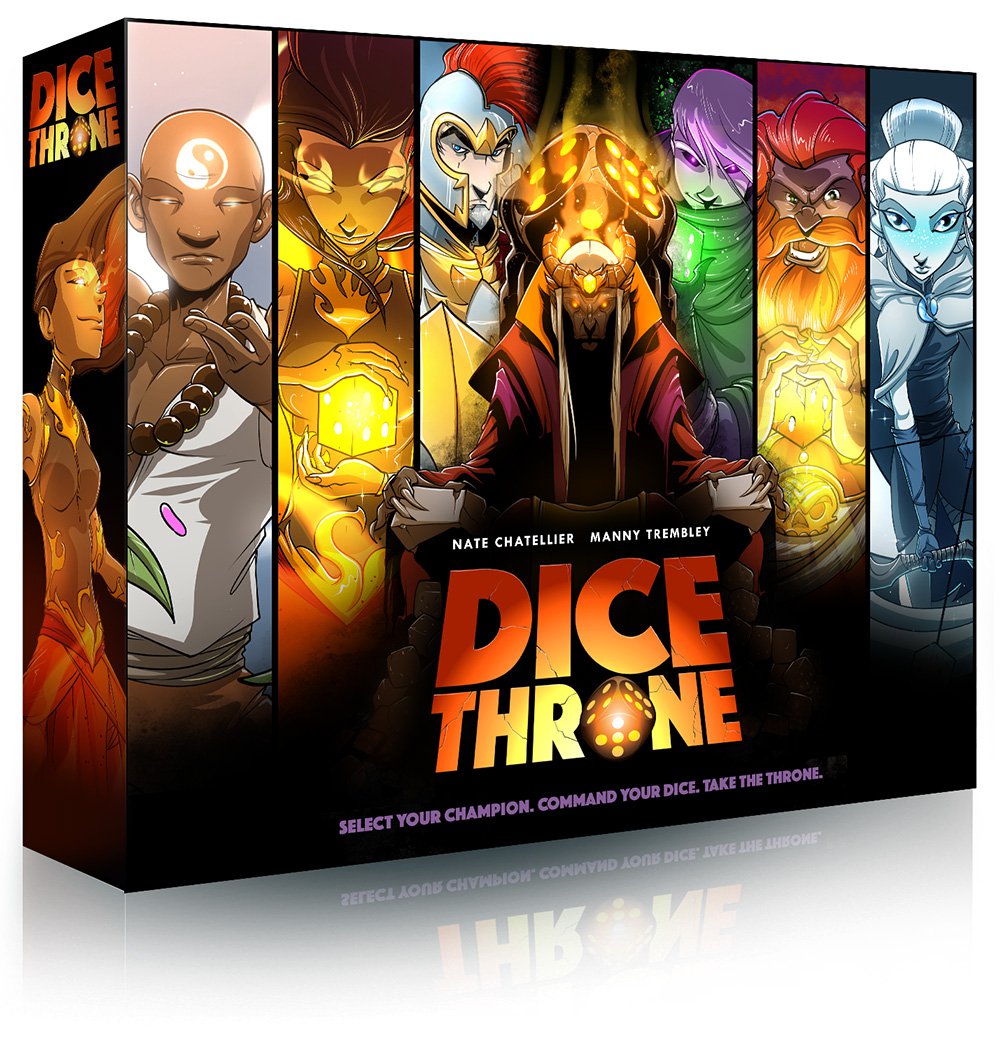 Dice Throne is a game that is made with quality components, fun twists to classic game mechanics, and absolutely fantastic artwork. It loves the theme of a fighting tournament, and the way a match can change who is on top every turn just adds to that feel. It has six very different characters, giving a great sense of replayablity, and it makes the game a lot of fun to pull out and see which of your friends gravitate to which character. While the game is balanced just for 1v1 or 2v2, if you have the right group, a grand melee can be an experience worth having. The game was absolutely worth picking up: it was our first purchase at PAX Unplugged on the show floor, and it's been a hit at all of our events ever since.

If you enjoy taking chances with lady luck, then I whole-heartedly recommend this game. It's fun, it's zany, and it leans into the random roll. If you are looking for a game that doesn't take itself too seriously, then go ahead and find yourself a copy. Better yet, if you read this in the next few days, check out the Kickstarter for Dice Throne Season 2: soon enough, there will be a whole new set of heroes that can be added to the original six. Get ready for more fun!