Dark Deity is an old-school tactical RPG, and currently the only game from Sword & Axe LLC, a studio so small that it doesn’t even have a website. With that in mind, I have to give major props to Sword & Axe for a strong first showing that goes beyond just being an homage to a classic game series. There’s a bit more to Dark Deity than just being a Fire Emblem clone - alongside a couple of nitpicks that I have to make - but if you’re a fan of old-school tactical RPGs then I’ll recommend this one right off the bat.

One of the main differences between Dark Deity and old Fire Emblem games is complexity in unit match-ups. Fire Emblem, of course, has its iconic weapon triangle: a rock-paper-scissors situation with its three main weapon types (swords, axes, and lances). Dark Deity doesn’t match the weapons up against each other, but rather against the different armor types. 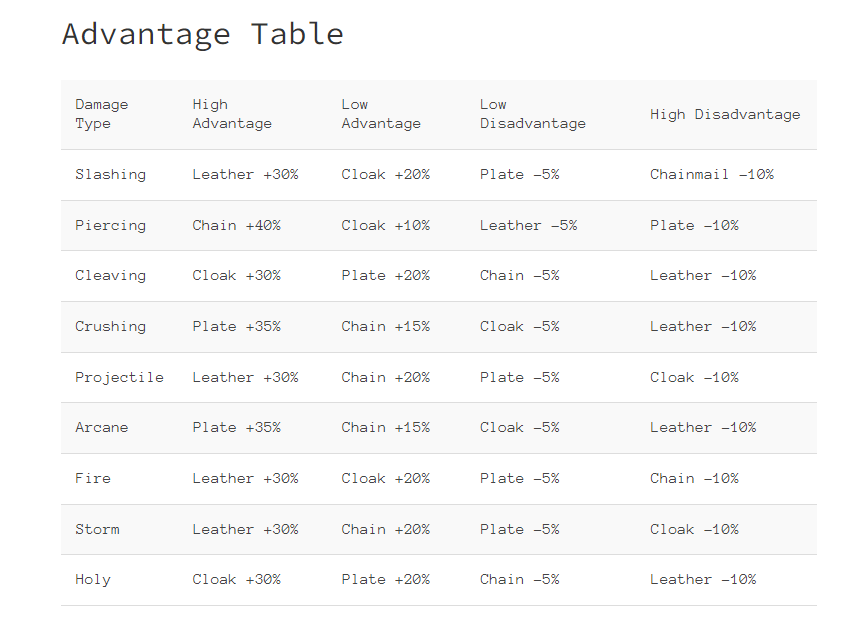 Instead of a weapon triangle, Dark Deity has a weapon/armor heckahedron.

It’s… a little more complicated than Fire Emblem. Plus, Dark Deity doesn’t always follow rules of thumb that you might have learned from other tactics games. For example, an enemy in heavy plate armor is a tempting target for mages, but high physical defense doesn’t always mean low magic defense—that enemy might just be an especially tough nut to crack. So, that advantage table? You’ll be relying on that a lot.

Thankfully, when you hover over a character, Dark Deity will show you which enemies you’ll have an edge against and which ones will put you at a disadvantage… though it won’t tell you how much of an advantage, so that green arrow could mean +10% or +40%.

Each character class comes with a special ability you can use in combat. These provide small (and sometimes not-so-small) tweaks in combat, like giving you an extra space of movement or disarming an enemy for a turn. On top of that, each individual character comes with a unique passive ability, similar to Fire Emblem: Three Houses. Character abilities do all kinds of stuff: power up nearby characters, give damage boosts under certain conditions, and so on. One of my favorites heals the character when she heals someone else—granted, I might just like that one because it’s the same as Best Girl’s ability from Three Houses. 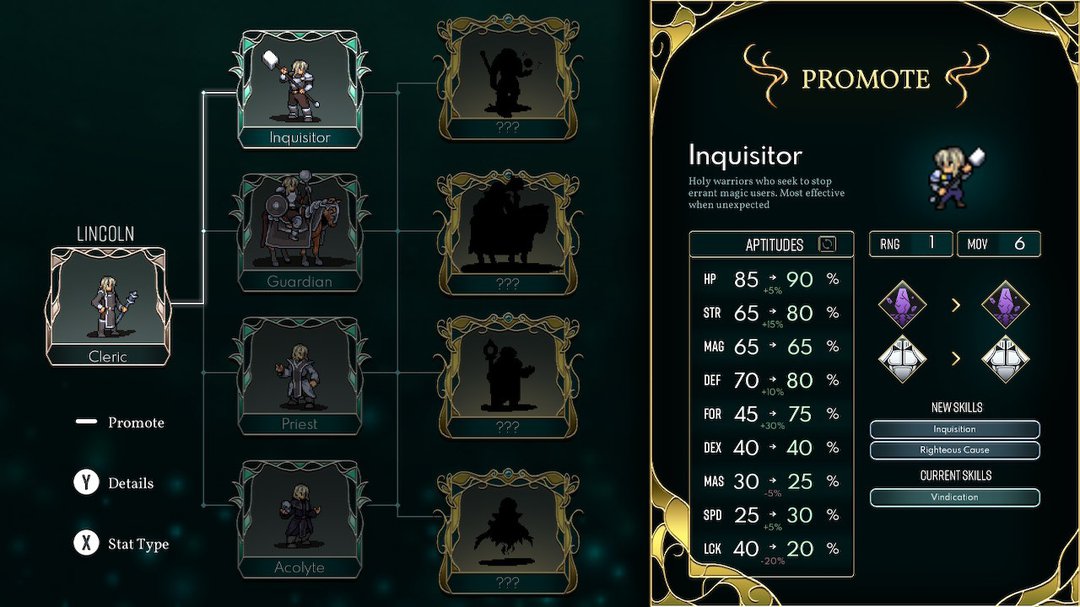 Even leveling up is more complex than it seems, with branching options for class promotions.

Dark Deity also has an interesting approach to equipping weapons. Each character always carries four weapons, each with a different specialty: power, crit rate, accuracy, and balance. These weapons never break (which is nice), and you can upgrade them using tokens that you either find in missions or buy in between battles.

You can switch between weapons freely before attacking so you can choose the best one for each situation. Realistically, though, you’re not going to upgrade every weapon—you’ll choose one or two weapons that suit the character, like maxing your assassin’s crit rate or balancing out your berserker’s low accuracy. 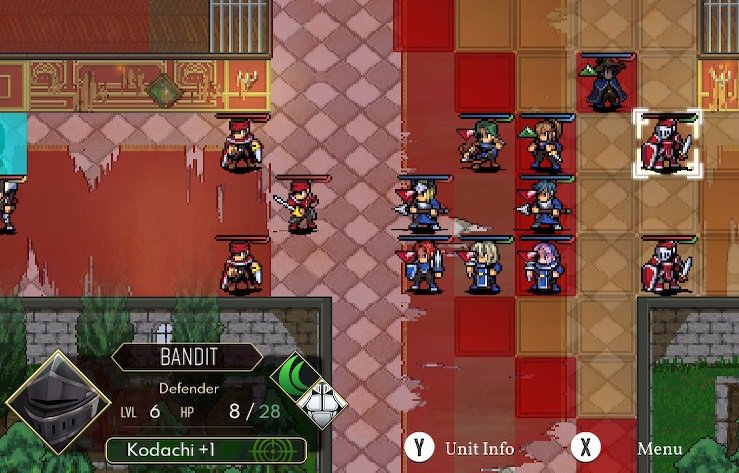 Don’t let the simple graphics fool you, Dark Deity’s combat has a lot going on.

To balance out the difficulty, Dark Deity is a lot more forgiving than old-school tactics games. Characters who fall in battle don’t die—instead, they suffer injuries and take permanent stat penalties, leaving them a little bit weaker for the rest of the game. However, those penalties are pretty minor, so they’d have to go down a lot to end up significantly weaker than other characters (and if they’re going down that often, you probably don’t want to use them anyway).

So, in short, Dark Deity is tough to master, but it’s also pretty hard to lose—your whole party has to go down for you to lose a battle, and even the characters who do “die” come back after the fight with only small debuffs.

We’ve discussed the tactics, but how about the role-playing part of this tactical role-playing game? Dark Deity puts you in command of a diverse cast of seasoned veterans, cutthroat mercenaries, brave volunteers, and child soldiers (wait, what?).

Dark Deity is a strange mix of silly and (mostly) serious. It begins with Varic, ruler of the Delian Kingdom, deciding to immediately recruit everyone from your officer’s academy into his war effort rather than just the graduating class. That means that some members of your party are only half-trained, and years younger than should be allowed on the front lines. There’s also a heavy undercurrent of, “Are we the baddies?”, as it seems like the whole war was Varic’s fault to begin with.

Soon enough, it becomes clear that there’s something more going on than just an aggressive war of expansion. Powerful divine relics start turning up, and it seems like the gods themselves (the titular Dark Deity, perhaps?) might have a hand in the world’s troubles. Yes, Final Fantasy Tactics fans are going to feel right at home here too.

At the same time, one of my strongest units is a former barmaid with a devil-may-care attitude and a flirtatious streak, and there’s a Monty Python reference hidden in the class promotion screenshot up above. It’s nice to break up the heaviness with a bit of humor, but once in a while the jokes do feel out of place. 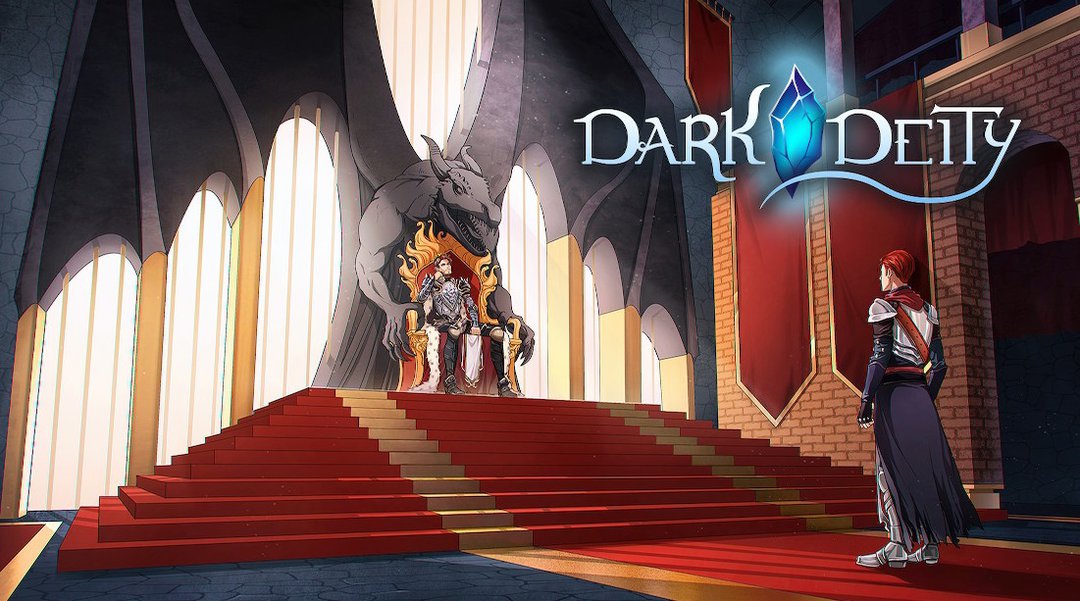 King Varic: “Sterling, do the thing.”

A Couple of Concerns

Dark Deity is pretty solid for the most part, but I’ve run into a couple of problems (some technical, some just questionable decisions). The major glitch I’ve encountered—not often, but more than once—is that sometimes I’ll try to move a character and it just… doesn’t move. Instead, the character goes into a weird glitched state where I can’t do anything with it, and I just have to hope that character wasn’t a key part of that turn’s plan (ending the turn seems to fix the glitch).

Then, there are a couple of missions in the early-ish game where the devs didn’t seem to take into account that low level characters can’t fly. The two I remember are a mission where you have to fight your way through a swamp that cuts your move speed in half—which Fire Emblem does with sand sometimes, but you have easy access to pegasus knights and wyvern riders to compensate. The other was a battle on a ship being swarmed by flying enemies, where you’ve got no choice but to wait for them to come to you. Neither of these missions were a dealbreaker by any means, but they were rather frustrating.

Still Well Worth It

Overall, Dark Deity feels like exactly what it is: An indie team making a tribute to a genre they love, and not afraid to have a bit of fun with it. Unfortunately, its indie roots do show through in a few ways, and not always positive ones.

Even so, I had a lot of fun with Dark Deity. It brings some interesting new ideas to the classic tactical RPG formula, while never forgetting what made the genre great. $25 is a more than fair price for a game that’ll probably keep you entertained for at least that many hours. Of course, you could put it on your Steam wishlist and wait for the price to go even lower, but I’d recommend grabbing this one for Switch if you can—I find that tactical RPGs are ideal for gaming on the go.