Betting On Nobles For Fun And Profit 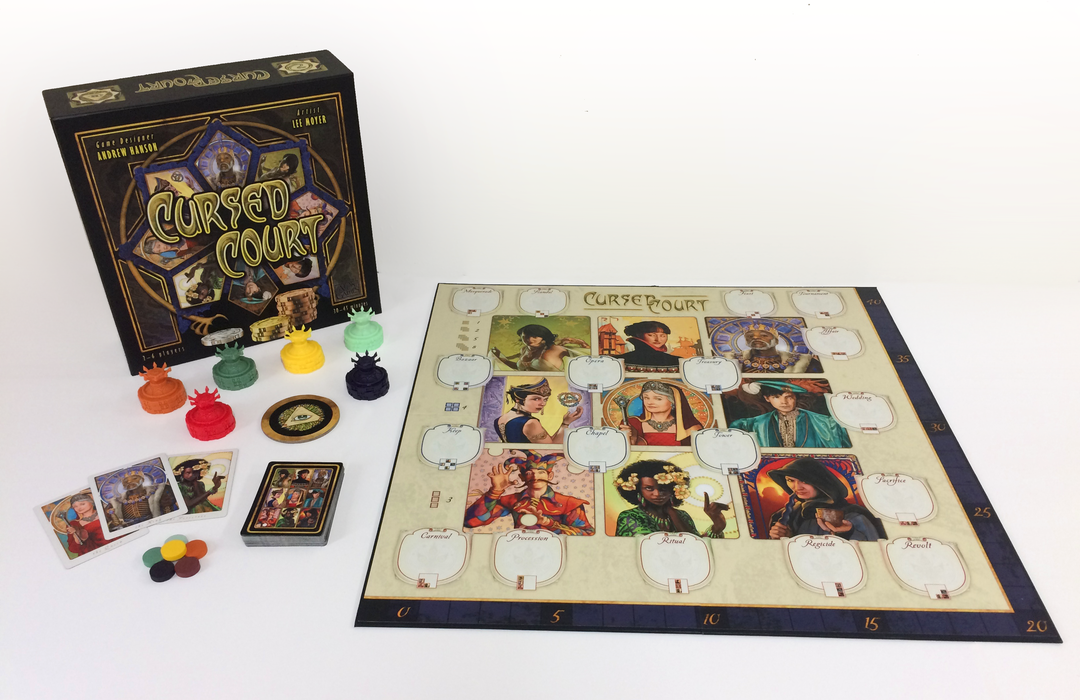 At first glance, Cursed Court is a curious game, one that looks as if it’s individual parts shouldn’t work together as a whole. It blends the intrigue and bluffing of poker with the careful ruthlessness of a territory control game like Risk or Inis. The first time I’ve shown anyone the game, the first reaction I get is surprise and confusion. Long time board gamers that shy away from traditional card games show concern the game will be too luck based, while casual players show suspicion that the game will be needlessly complex.

After a dozen playthroughs, I can safely say both styles of player leave satisfied. There’s a reason that Cursed Court has a permanent place in my collection: Let me see if I can explain exactly why.

To Catch A King. Or Queen. Or Duke. Or Assassin…

One of the real strengths of Cursed Court is the simplicity of the goal: You are trying to make bets on which nobles are going to be in power after a year in court. If you guess correctly using the information you have, you get points. Earn more than the other players, and you’re the lucky lesser noble who now has more power and wealth than the rest. It has a real ‘shadowy advisor’ vibe to it, which I really like. 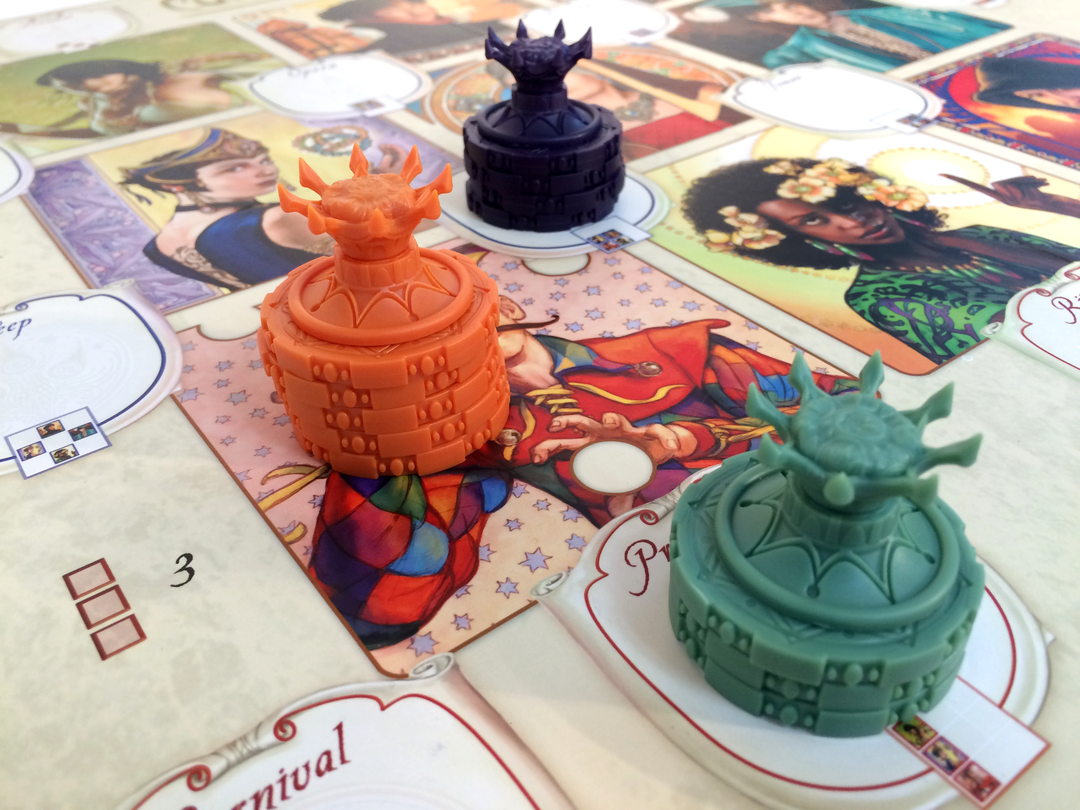 This theme maps strangely well onto the actual poker/territory game you are playing. Cursed Court considers a complete game to be three ‘years’, with a year being made up of four rounds, called seasons. In the first round (Spring), hidden cards are dealt out, and a single card is revealed from the deck. Based on this card, each player places one bet on the board as to which nobles are in play. The second round (Summer) starts, and a second card is revealed, and everyone makes a second bet, and so on.

This is pretty simple so far: make bets to get victory points. If you make bolder bets (aka, betting not just on there being one noble, but instead a whole row which is called something evocative like “The Wedding” or “The Regicide”), there’s a chance you’ll get more points than others. If there are duplicates of the same card, it's worth more points too.

This is the part of the game that feels very much like Blackjack…and also where Cursed Court makes its first real leap from a betting game into a full board game.

Poker Politics and Risky Board Moves

Like Blackjack, there are cards that are public knowledge and cards that are hidden, private knowledge. There are three large complications to this, with each having ever growing consequences. 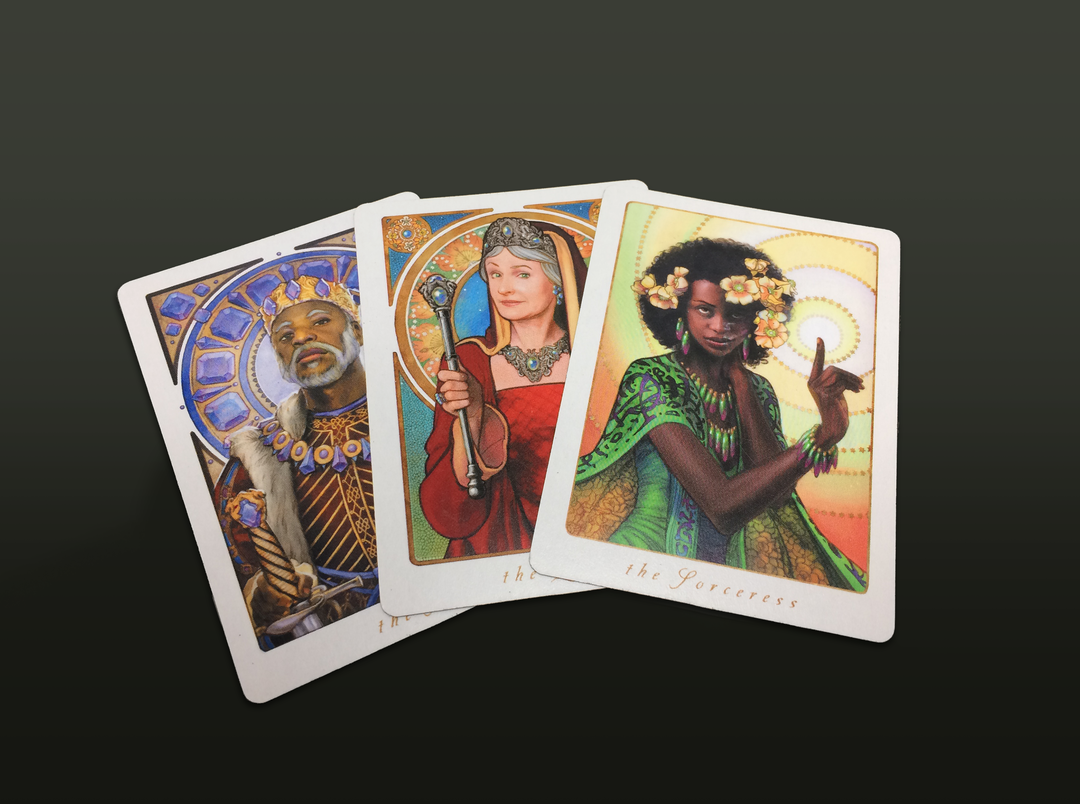 The artwork by Lee Moyal is something special here. The gilded Art Nouvaeu style really makes Cursed Court stand out.

The first complication is that while there are hidden cards, some of the hidden information in Cursed Court is always shared with another person. Before the first round in a year (Spring), a card is placed between each player. Players can look at the cards to either side of them, and no others. So, if a game has 3 players, there are 3 hidden cards, with each player knowing only two of them. A six player game has more hidden information, with each player knowing only two of the hidden six cards.

The second complication is that in Blackjack, you are just trying to beat the dealer, or the house as it were. Other players at the table can try and math out probabilities of what cards might come up next, but it doesn’t directly affect you. In Cursed Court however, you are trying to earn the most amount of points over three years, rather than just a win-or-lose scenario. Figuring out where to bet is incredibly important, so you want to know more than all of your opponents, even finding ways to bluff so you keep the good hidden information to yourself. This part makes the game feel very much like Poker…

…Until the third complication, which suddenly takes Cursed Court out of the realm of card games and catapults it more into something like Risk. You see, only one bet can occupy a space on the game board at a time. Tension grows quickly as the seasons progress, and more guaranteed points appear on the board. If the cards reveal three queens, everyone is going to want that space. If you have hidden information to know that the point heavy “ritual” space is going to go off, its very likely at least one other person at the table knows that as well.

By the time the fourth round in a year (winter) is happening, people are desperate to get points however they can. Fortunately, this is where Cursed Court reveals another layer to the gameplay, and one that I think keeps it feeling fresh even after a dozen plays.

Putting Your Influence Where Your Mouth Is 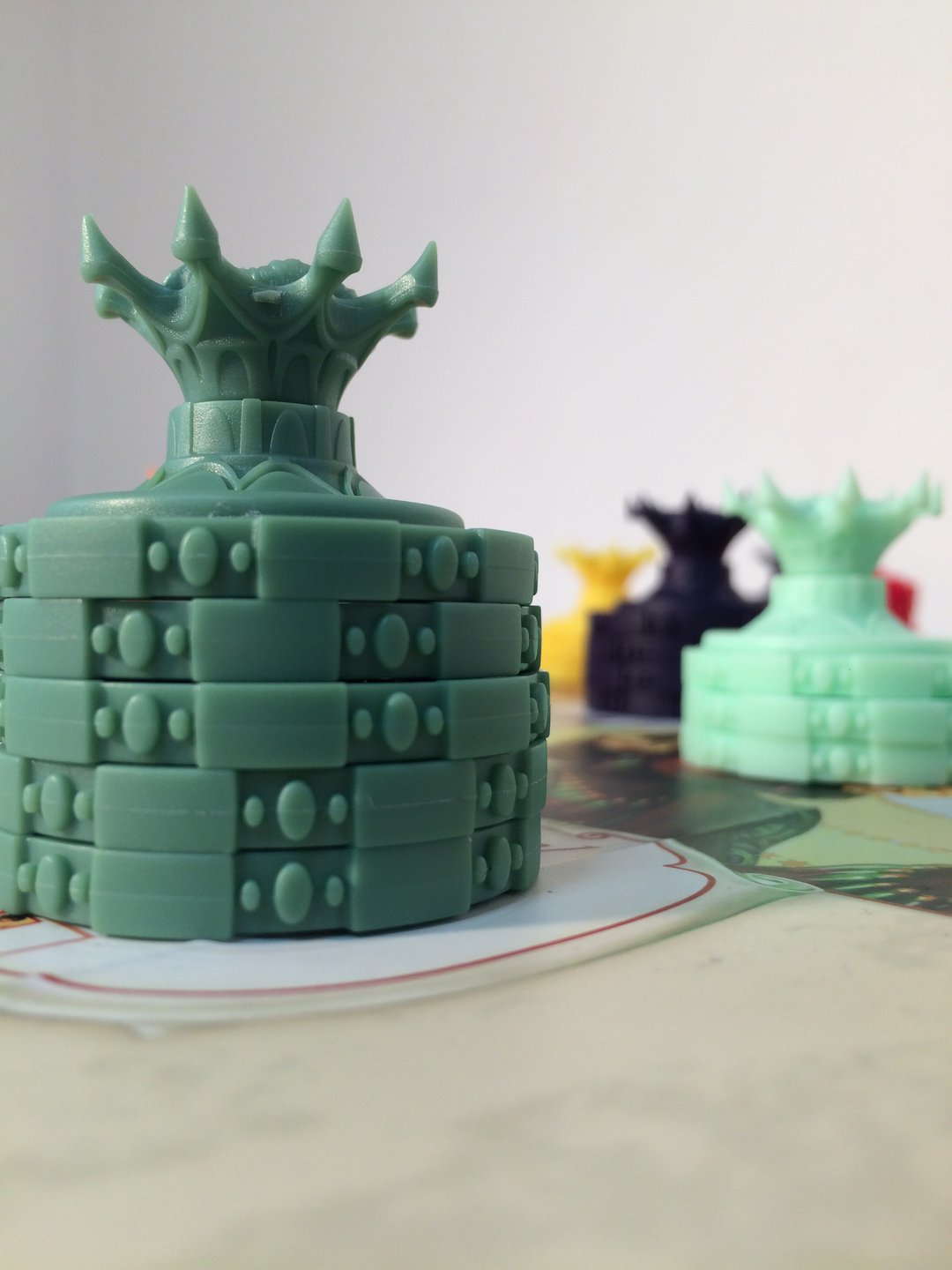 It could have been easy to have made Cursed Court a game of ‘finder’s keepers’, where the first person to figure out secret knowledge and claim it would win. However, that wouldn’t be very fun, as it wouldn’t allow for other players to interact with each other. This is where the weighty plastic coins come in.

The coins aren’t money, but instead represent influence in the court. When you make a bet, you stake a claim on that bet by choosing an amount of influence to stack under the crown you put on the board. The amount of influence you choose to back up your bet becomes incredibly important as the rounds keep going.

As an example: let's say the green player puts down a bet on the sorceress in the first round, using only two influence. Two rounds later (Autumn), another sorceress card is revealed to everyone. Suddenly, players want access to green’s bet. If someone chooses to spend twice the amount of influence, they can bump the green player and take that square instead. If you are the green player, don’t worry: you do get your crown back, and the next season doesn’t start until all bumped bets are put back on the board.

Just remember that every player has only twenty influence coins to get through four rounds of betting. Do you want to risk an expensive land grab in Spring, or do you want to save as many coins as possible until later in the year as more information is revealed?

I’ve now had a chance to play and teach Cursed Court over a dozen times, and I’m still hooked on how wonderfully simple the game is to explain while also feeling incredibly intense during play. After showing the game to at least twenty people, I’ve seen a lot of different ways to come up with a surefire way to win:

And, after every game night, I’ve seen these various techniques succeed wildly or fail horrifically. One of the gifts of Cursed Court is that there is no ‘fixed’ solution since so much of the complexity of the game isn’t in the board or the cards, but instead in how the people playing interact. 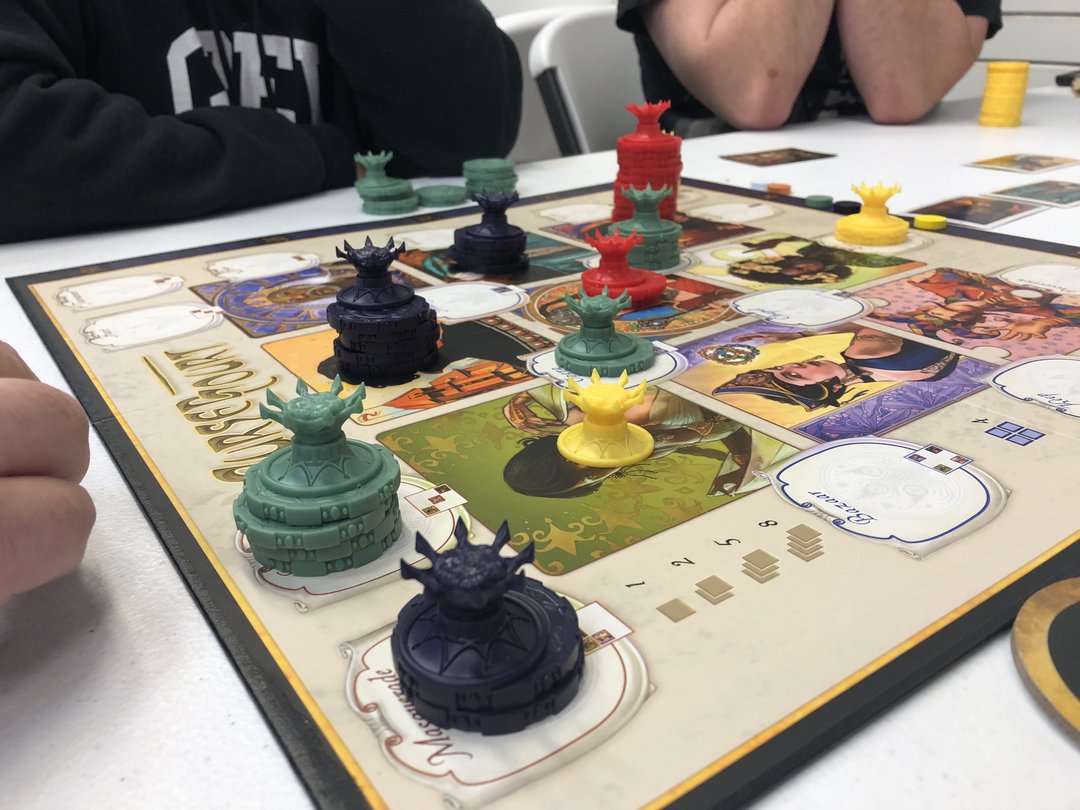 With the basic rules so simple, all of the complication comes from the other players trying to earn just a few more points than you can.

Games with more players do seem to become a little more aggressive; if there are six players, that’s 24 bets in a year, and there’s only 27 spaces to place a bet. People become more assertive, bumping more often and trying to get others to spend too much influence away from their real target. Meanwhile, two or three player games are much more methodical, with players trying to figure out all the information they can, risking bluffs instead of going right for the points.

The board of Cursed Court plays like a territory control game, but with there being no dice, no actual combat, it’s a very different experience. You only have four actions in a round, and each player’s calculus for risk changes how the game plays immensely. It's one reason I’ve found it to be a great game to share in public settings: it's easy to pick up, hard to master in its entirety, and playing with different people creates very different experiences.

A Unique Game Of Both Crowns And Cards

If I’m being honest, I first got this game years ago, back in 2018. I enjoyed how unique and interesting the mechanics were when they call came together, but my focus had been on a few big name games that my friends wanted to play more. It was PAX Unplugged, it got buried in the shuffle, and life went on. 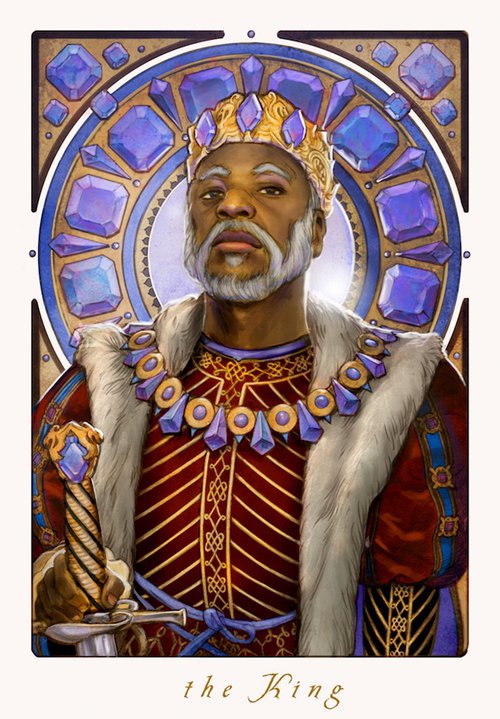 Except, well, this is a board game that came back from the dead. When COVID (and having a son) took apart my hobby time for nearly two years, the hip game of the month didn’t really matter much anymore. I just wanted to play games, any games, ones that made me feel connected to the other people I was playing with around the table.

Cursed Court is a perfect game for that connection. It’s competitive, but not inherently warlike or aggressive. The rules are simple to learn, with the complexity coming from the other players around the table instead of a manual. Games can be fast once people know the rules (30 minutes!), but it's very easy to manipulate however you like. Teaching people or learning new games at a cafe? Play just one year at a time. Playing with friends who you haven’t seen in years? Say you’ll play five years and enjoy playing mind games and trading barbs as you take your turns.

I love Cursed Court. I love how it's this strange hybrid of traditional betting games and board games. I love how I have no other game like this in my collection at all. I enjoy how weighty it feels with its bulky plastic coins and crowns and yet how quick it is to set up and play a full game. Personally, I think the game is especially fun when you make grand declarations as if you were at a Ren Faire such as “I bet nine coins on the Opera!”... but that may just be me.

Many games show up, make a big splash, and then vanish without a trace a few years later. For me, Cursed Court has found a permanent place in my collection that still feels unique. If I were a betting man, I’d say this game will do the same for many of you too. Have fun scheming!