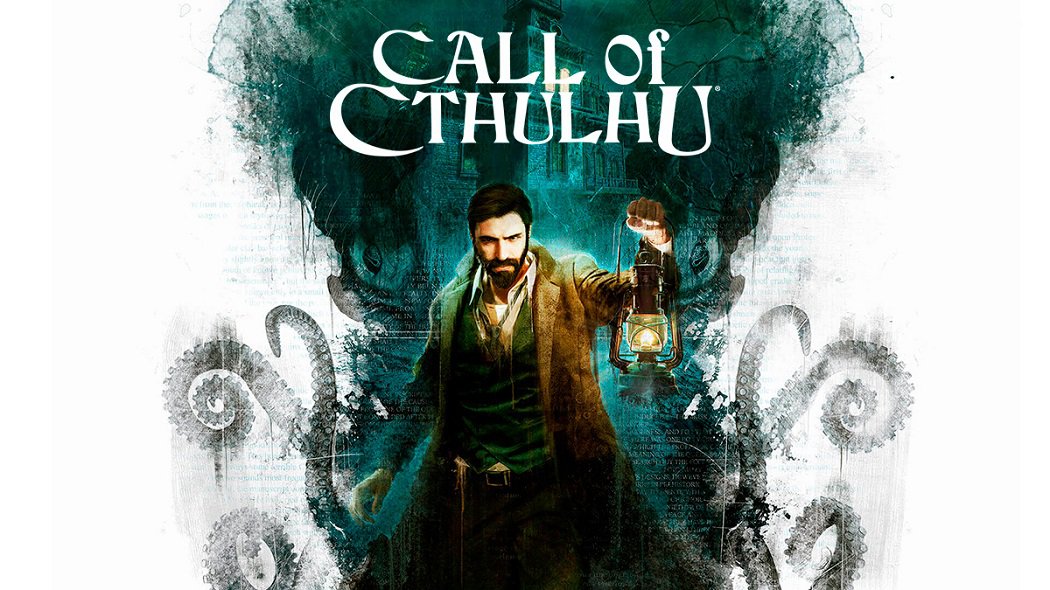 The dark, maddening mystery of Call of Cthulhu is quick to understand and engaging at its first few clues. Based off of the pen and paper RPG of the same name, this ode to Lovecraft’s work brings players on a dark path, solving a horrific mystery that leads to a greater conspiracy. But to reach its end, players must make a choice: learn the truth or sacrifice your sanity? In true tabletop game fashion, there are no do-overs once you dive in.

This is a game that is engaging when you first crack open the case, but is Call of Cthulhu worth finishing?

Before entering a chapter in Call of Cthulhu, the game calls to you to enter madness. It’s an accurate descriptor since you’ll be walking into a maddening tale as Edward Pierce; a former soldier in the Great War. Now, he's a P.I. who copes with his own memories with prohibition-era whiskey and sleeping pills. When approached with a mysterious case of a murdered family that promises to be worth the time, he travels immediately to the island of Darkwater; a forgotten island port that thrived on whaling in its long forgotten hay-day.

I should make note here that this storyline probably sounds familiar to anyone who's played a game like this for before. Fortunately for me, this was my first Lovecraft title.

It is here that you and Pierce delve into the case of the Hawthorne family, where they seemingly burnt to death in a fire in their mansion. This investigation quickly spirals however into something much more sinister. It being a mystery and all, I’ll try and reveal as little as possible... It’s a game with Cthulhu, so you know there's going to be cultists. 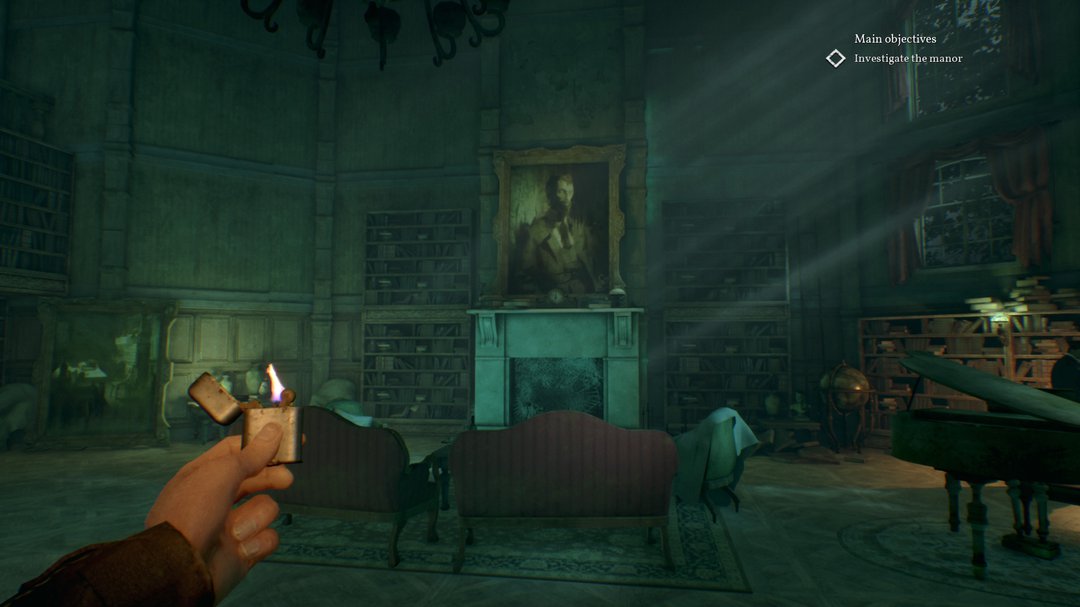 There are tons of details in every level, like portraits of other characters and moody lighting.

That being said, the entire world is incredibly fleshed out, with nothing being left to question. The town of Darkwater and its various locations have deep history, entrenched with references to obscure and dark lore. I have to say, it’s refreshing to discover the context of a story through conversations with NPCs rather than solely through finding journals or data logs like most action RPGs. Revealing information in this way makes the entire investigation more worthwhile, not to mention memorable. Great facial animations help give life to the growing terror Pierce is falling into.

The cast of the game is a roster of unique individuals, each with their own motives, moralities and delusions. Their stories were interesting and made me want to delve deeper. Unfortunately, as well written as the actors in this horror mystery are, their voices often fall below that par, especially in the case of Edward Pierce. When he’s stressed and panicking - which he will be for a good portion of this game - it does sounds genuine. But when Pierce is displaying any other emotion, he sounds monotonous and tiresome. It stripped away a bit of life from a character badly in need of it.

By the time you’ve reached its end, the mystery of Call of Cthulhu will have thrown you for some unexpected twists. It's nothing Shyamalan-esque, but enough to keep you on your toes. Still, the four endings of the game all felt equally disappointing, none wrapping up the loose ties of characters whose fates have yet to be sealed and none with enough screen time for the eponymous antagonist. It feels like this game could have done with a bit more polish and just a little more time. 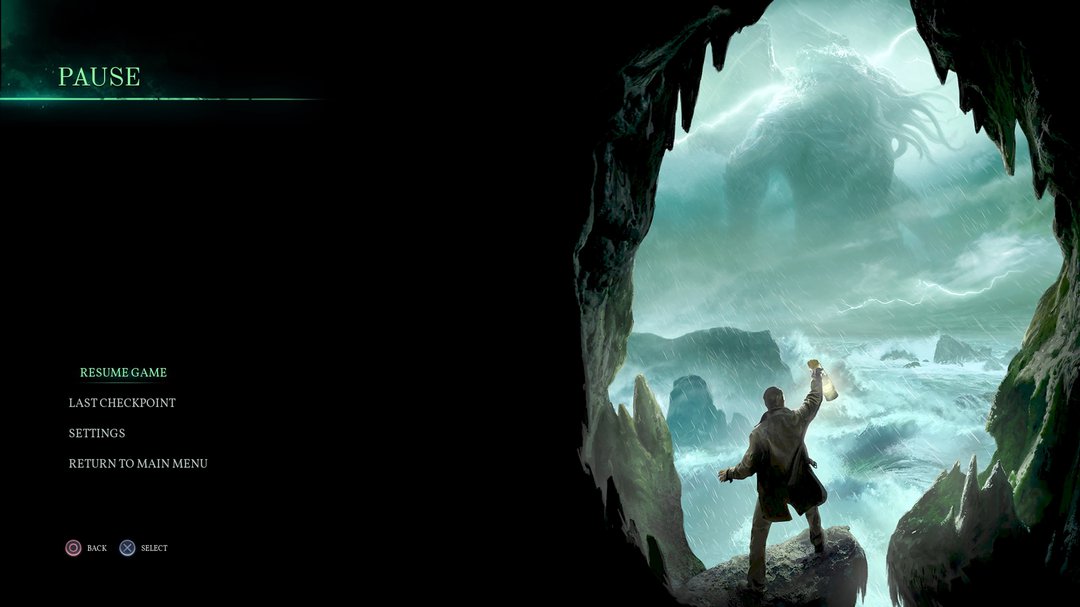 Hold On To Your Sanity

While they were developing the game, it’s clear that developer Cyanide took more inspiration from the pen and paper Call of Cthulhu than a name. Like I said before, everything that you do is definite; you can’t manually save, and the game auto-saves after making any game-affecting decision. With so many dialogue paths to go down and no chance to change your mind, my play through felt more like a run meant to be repeated than a one off story to go through and not touch again. The similarities didn’t end there. 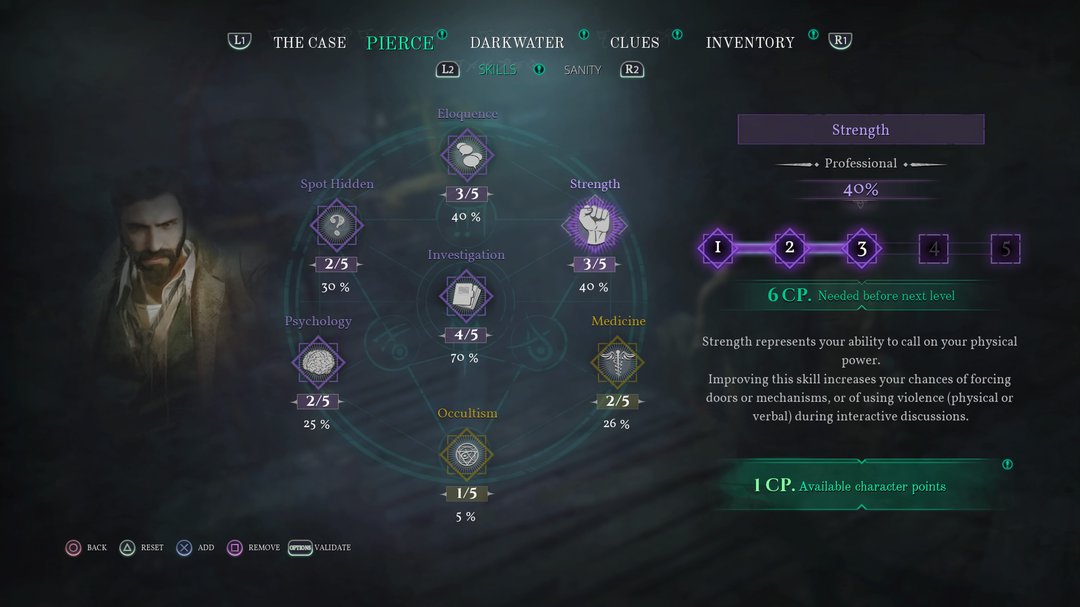 Two of the most interesting concepts in the game are the different sets of stats that are applied to Edward Pierce as you lead him on his investigation into the cult on Darkwater. The first is a web of his different skills as a P.I, like Investigation, strength, psychology and the occult. You level these abilities with character points, which are unlocked as you go through the game at set points, you can’t grind for them or end up with more points one run than another. Other than affecting available dialogue options, these attributes are used in ability checks throughout the game. You end up going down different investigative paths and discovering more context behind clues depending what you dump your points into, but make no mistake, some are more important than others. Investigation is one of the most heavily utilized skills, and I ended up getting that maxed out before anything else.

Of course, it wouldn’t be a Lovecrafian game if your character wasn’t somehow going slowly insane, and well, that’s just what happens over the course of Call of Cthulhu. Already strained by his memories of the trenches in the Great War, Pierce’s mind unravels with each unexplainable happening, gruesome sight or piece of unholy knowledge taken in. While some of these traumatic experiences can be avoided, others are integral to the mystery and lead to a very important question; is finding out more about the happenings of this town and its inhabitants more important that my grip on the real world? Your decision on this is one of the most important but also one of the least conscious. I found myself willingly exposing Pierce to the unnatural and unholy just to grasp some greater understanding of something against the grain of reality. 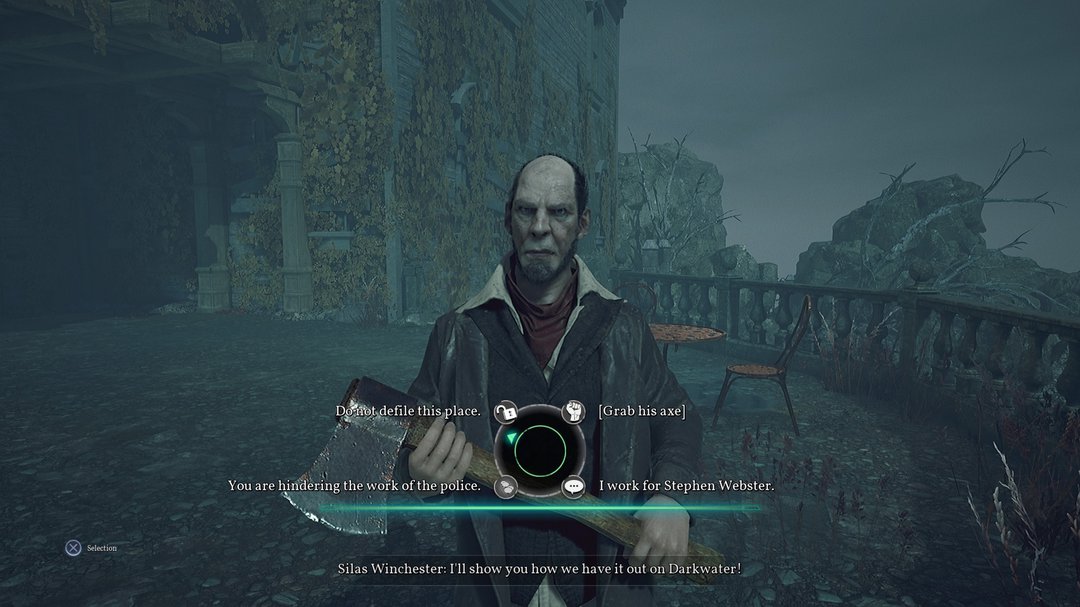 Like Life Is Strange, Dialogue options are a huge part of the game, shaping each run

As insane as Pierce was being driven, by the end of Call of Cthulhu I joined him in nearing the end of my rope. Not because of eldritch abominations mind you, but because by that point the game had gotten stale. As a detective, you do spend most of your time investigating things; people, crime scenes and the sort, and that represents a majority of the gameplay. You’re either looking at things or talking to people, with only a few exceptions. In some cases you are attacked by monsters or people and must hide, which is easy enough to do because nobody can see past their nose in this game. At one other point, when the grizzled war veteran detective finally decides to pull out his gun (I’d been wishing he’d do so for the entire game prior to this at least for flavor), the shooting mechanics were underdeveloped to say the least. There simply isn’t much variety in what you can do, which for the first few chapters of the game is fine, but as you continue into the climax of the story it becomes draining. 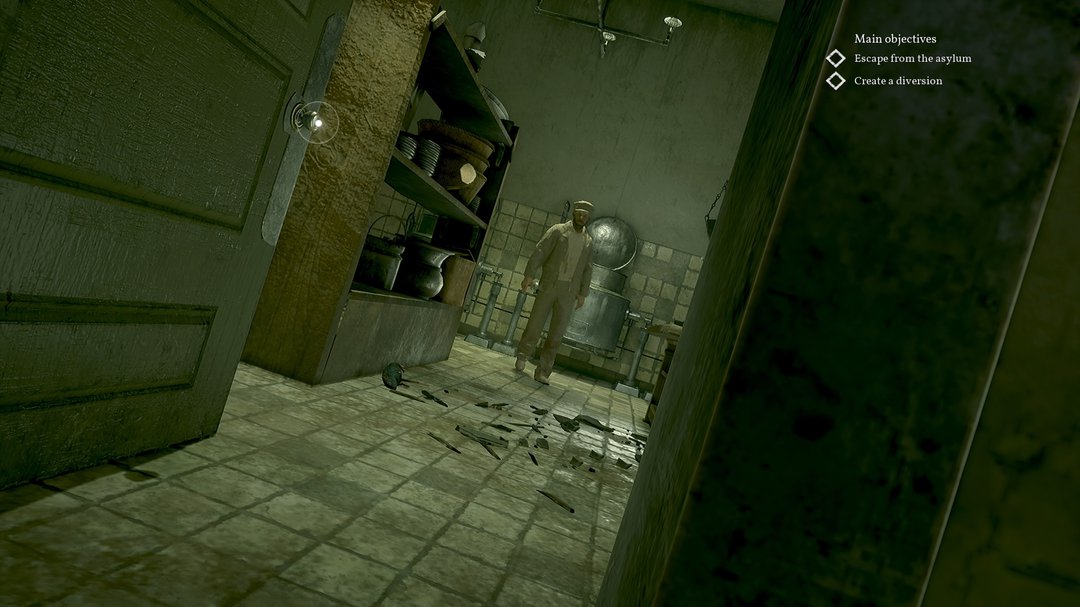 Like the gunplay, the stealth mechanics feel half-finished, detracting from a really good core game

An Inspiring And Imperfect Ode To The King Of R’lyeh

While there’s a lot that I can’t - or rather won’t - say about this game, I can say it was downright inspiring for someone unitiated into this world. I’ve never had an interest in Lovecraft, or the mythos of monstrous gods that he created, but after my around eight-hour playthrough, I’m not just interested in the pen and paper Call of Cthulhu, but also the book of the same name. This mystery is a fantastic introduction to the Lovecraftian universe, and one that won’t let go after you've put the game down. If only this game had better mechanics, it could have easily been a cult classic. However, gameplay that grows stale quickly makes me wonder if it's worth buying at full price.

Although it is sometimes marred by less than stellar gameplay and some strangely awkward voice work, Call of Cthulhu remains a memorable experience for delivering something few other horror games have managed to do. It crafted a world, populated with memorable characters and mystery that quickly envelops and soon has you wondering about the truth yourself. My praises are high because this is my first encounter with Lovecraftian horror, and if you haven't had a chance to try out a game inspired by the writer, then maybe you'll react the same way I did too. I would say look out for this game when you see on sale, especially if you haven't had a chance to find yourself in a world like this before.