Why Smaller is sometimes Better

Seriously, why would I ever want to play SimCity when I could have Banished?

I know, this is a little bit more confrontational than my usual introductions and reviews, but I really can't get over how this game, carefully and slowly made by one man, has gone up against a counterpart backed up by massive multi-million dollar companies. The new SimCity lets you build cities en-masse. Banished makes you cheer, flinch, and squirm as the tiny town you've spent years carving out of the wildness starts to flourish, or undergoes crippling strokes of misfortune.Banished is a game that was just released on Steam at the end of February, and defines an Indie game very well. Incredibly small design team (did I mention this is one person?), made to recapture the charm of an older game and re-invent it, and sometimes, a game that just doesn't fit in with modern, mainstream game sensibilities. There's no dramatic opening. There's no exposition, besides the events that tick away on the counter, reminding you what supplies are low, or that one of your citizens has suddenly passed into the great beyond. You have only the name inside the game itself to get a feeling of what this is: a poor, poor group of people that have made off into neutral ground, to try and survive nature and the elements on their own. Are they refugees? Criminals? I guess that's up to your imagination.I had been excited about this game ever since hearing about it: it was a sandbox building game that felt like it had gravitas behind it. So I got the game, and hit 'start', thinking it would give me an introduction. A small 'this is how you build a house'. Anything. And...it didn't. Just a few families, children in tow, no houses...a small storage shed and holding area for wood and stone. A few tools. A few coats. Enough Potatoes to make it through one winter. Maybe.This put me off at first, I'm not going to lie. Where was the direction, where was someone telling me what I needed to do to be successful? It was then that I realized the beauty of this game, in all its simplicity - to live was victory. To have a town, any town, that could manage a population well, to keep who you have happy and content in their life of sustainable living. There was no records to break, no objective besides survive, and maybe, if you were lucky, thrive. 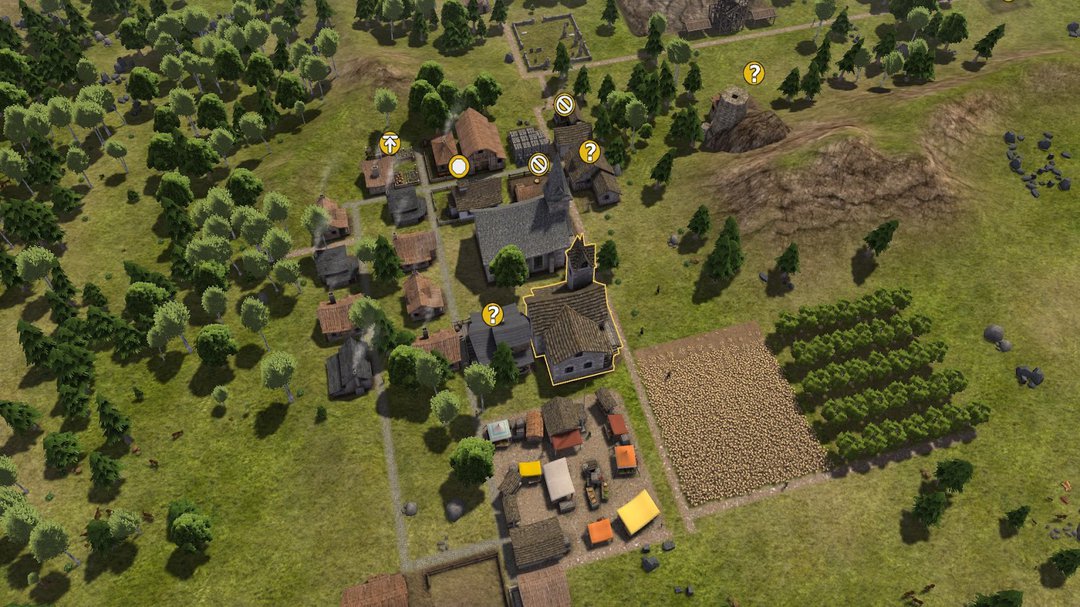 After 10 years of hard work, the Orchard is growing, the market is starting to get trade, and a church for the faithful. It feels like a real town... but can it last through another disaster?

The game starts off almost peacefully. You build four homes for your families, and start clearing the wood around you to make it feel like a town square, and a feeling of accomplishment blows through you. A sweet, simple satisfaction. Suddenly, hubris hits - its time to expand. To be a real town. You find yourself laying groundwork for two or three buildings at a time. "You know what my town needs? A market! Every town needs a market", or "Lets prepare a town hall, give a landmark to the place."You sow the seeds of your own starvation this way.Expand too quickly, and you prepare yourself for some major setbacks. This happened in my years 5-8, when I felt confident enough to speed up the game and let my workers begin to take other jobs besides basic food and clear cutting. A blacksmith, on full production. A mine and quarry, for when the resources nearby are cut away. A tailor. A church. An orchard instead of a second field of foodstuffs.The Seventh Winter hit, and suddenly, my town, that had finally built towards 25 healthy adults, was falling backwards. I rushed to re-commit members to other parts of town, to the fishing dock or hunting villages, but it was too late. An extra snowfall that ran into spring, and then snow hitting as I was harvesting in year eight cost me, and suddenly 10 members of my community lay dead, in the graveyard I had built after a traumatic accident early in my town's history. 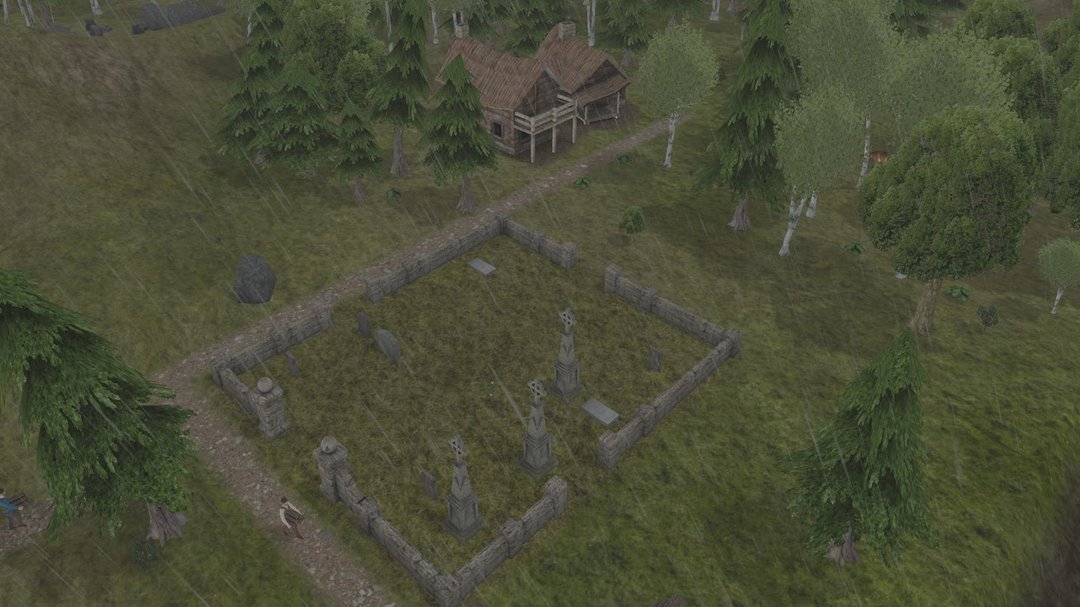 Claude... Emgard....Josephine, Antonio.... I'm sorry you died before I got the tavern going. That's not even fair.

There's no fanfare if your villagers die - something I almost found myself wishing there was more of. A ceremony. A plaque in the menus where you can see the lists of people and how exactly they died. But, then again, the game doesn't really need it. Banished is able to add a feeling of intimacy by just adding names to the otherwise unremarkable and featureless characters. When Clarence the trader dies in my game, two things happen; the first is the obvious gamer response of "No, I need a new trader now to keep things going!". The other is a soft, quiet voice in the back of my head that goes "Oh....Clarence, no...I remember when you helped build the Mine and Quarry for me."When I was deciding whether or not the game was worth it, I asked my friend "Better than SimCity?" He responded back. "Its a lot more personal." He was 100% right, and I'm happy he was.Don't worry, you'll still get those monumental moments. Take this screenshot, as an example. 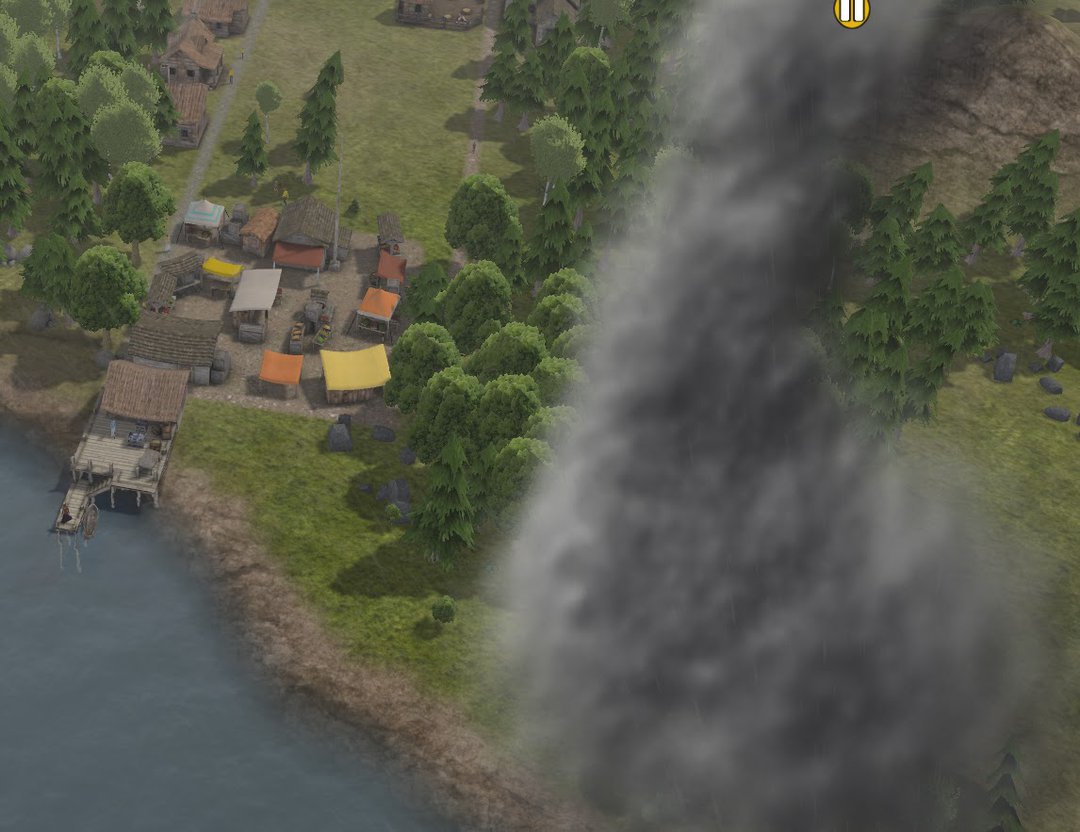 That would be my town, four years in. Finally with some infrastructure. Ready to start branching out, building things I didn't quite need, but wanted instead. Families starting to thrive. But then, the wind howls, time slows down, and this massive vortex works its way through the map. I watched as it blew through, holding my breath...just missing my quarry and mine I had been preparing. I was cursing as the trees and resources under it vanished, as they were in areas I was using to supply the town. That's when I got the pop up message that a five year old child named Audio had died. Out, playing in the woods... and then he was no more. It stung. Nothing more than just a message saying a child died... no cutscene, no fanfare, but it was enough. Enough to get across the point the game is trying to make: that starting over, making your own life in the wilderness, can be rewarding and invigorating. But quickly, suddenly, the harshness of nature can snatch it away in an instant, and make your hard work for naught. My town is small still - recovered from the famine of years 7 and 8 - and now I have the basics of the town. Its ready to expand. I'm looking at the map in a different way, as I go from a tiny haven to what will be a full town. It'll probably feel a little less personal, a little more frantic - I've seen the reddit boards and steam forum threads filled to the gills with graphs and charts and pictures of buildings derelict in a row to know that as a hamlet becomes a town, new challenges emerge. I'm hoping that I still love the game as much as I do now, where I can still memorize the names of each of the residents of my hideaway in the hills, and cheer or mourn for them respectively.Considering how much I love this game already, I'm not worried.