Battling Through the Land of Ooo 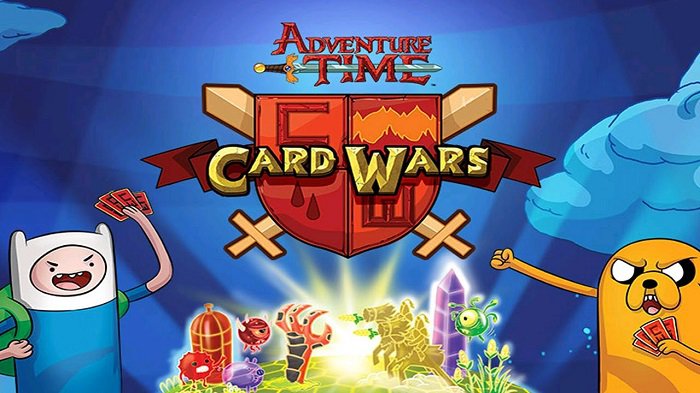 Most of our readers will have at least heard of Adventure Time, a show on Cartoon Network that is frequently and accurately described as simply “trippy.” It takes place in the far future, on a world devastated by nuclear war and now inhabited by various species of mutants and magical beings. Some episodes make you wonder what the heck you just watched, others blow your mind, and a few break your heart. 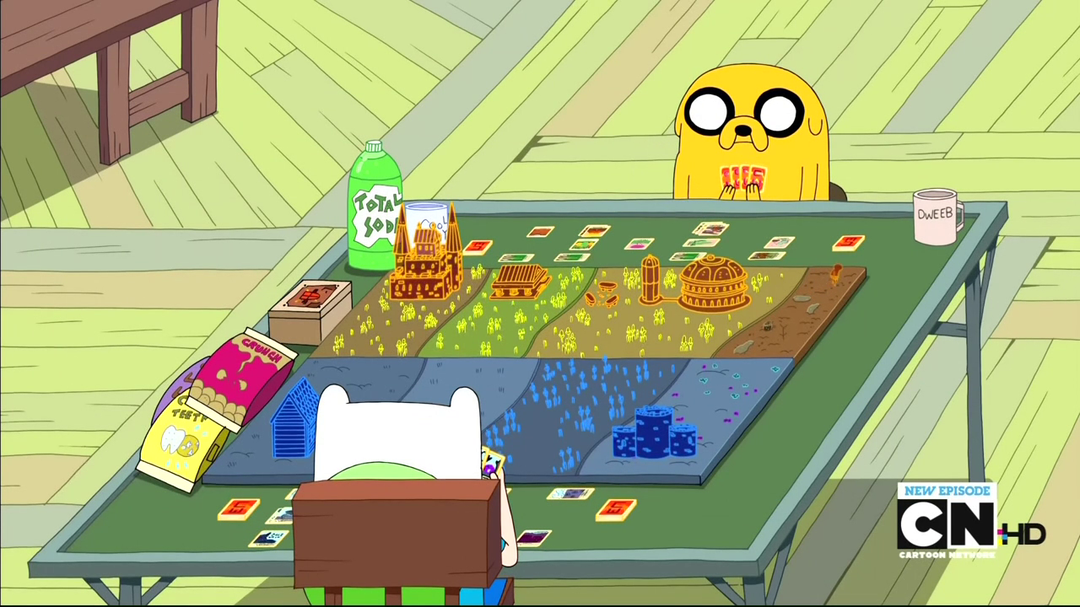 Card Wars has very little to do with that.

Card Wars is a formerly fictional trading card game that was shown in one episode of Adventure Time. That single 11-minute episode spawned an actual card game, which now has both a physical version in stores and an online version available for mobile. As a fan of Adventure Time and CCGs, I decided to check it out.

Like all CCGs, there is a story behind the game. In Magic: the Gathering you are a mighty Planeswalker fighting for control of the realms. In Netrunner you’re a hacker trying to access sensitive information, or a corrupt corporation trying to protect it. In Card Wars, you are... a guy playing Card Wars. The game is set in the world of Adventure Time, where you and your opponent battle to find out who is better at playing Card Wars and, therefore, who is the Dweeb and who is the Cool Guy (technical terms). It’s silly, self-referential, and bordering on nonsensical. It’s Adventure Time to a tee. 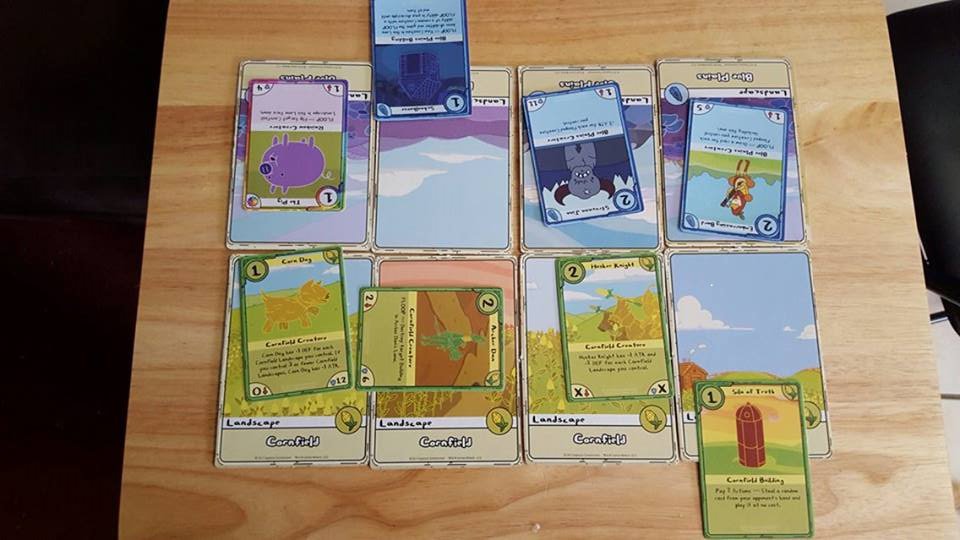 “I floop Archer Dan to destroy your Schoolhouse!”

Part of the fun of the Adventure Time episode was realizing how ridiculous CCG players sound sometimes.

Premise aside, the game itself is pretty straightforward . It plays sort of like a cross between Hearthstone and Magic: The Gathering. You have a set number of actions you can use to play cards and use abilities, then you fight. Lather, rinse, repeat, and the first person to zero life points loses. Anyone with any experience playing trading card games will have no problem picking up the rules; even the friend I tried it out with, who had never touched a CCG in her life, learned the game without too much trouble. I would even say it's a good introductory game for all CCGs.

On the other hand, every card game needs something to set it aside from all the others. Whether it’s the premise, the style, or just a unique mechanic, there has to be something to distinguish it from every other game that’s played with small cardboard rectangles. For Card Wars, the featured mechanic is the lanes. 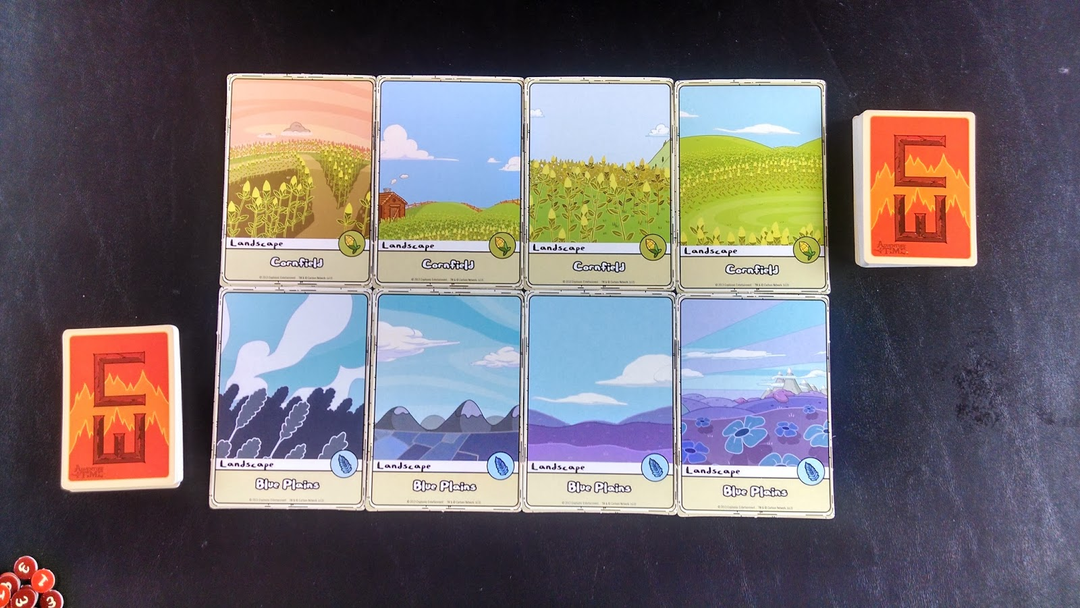 The play area is divided into four lanes, each made from a landscape card from each player, and each landscape can house only one creature at a time. The basic gameplay involves clearing lanes so that your creatures can break through. You want to make sure your creatures have a clear shot down the lane and straight to your opponent’s life points. The lanes do restrict players’ possibilities much more so than a game like Magic or even Hearthstone does, but they help to focus the action. Players can pay attention to one clear zone at a time, instead of needing to worry about a large, chaotic board.

Overall, Card Wars is easy to learn and quick to play, and it’s not likely to cause too many hard feelings. It’s a good game for younger players, people who are new to CCGs, and people who tend to drink excessively at game night (*cough*). Perhaps best of all, the game offers several different dual-deck starter packs which are totally legal and game-ready, so it’s very easy to pick up and play. 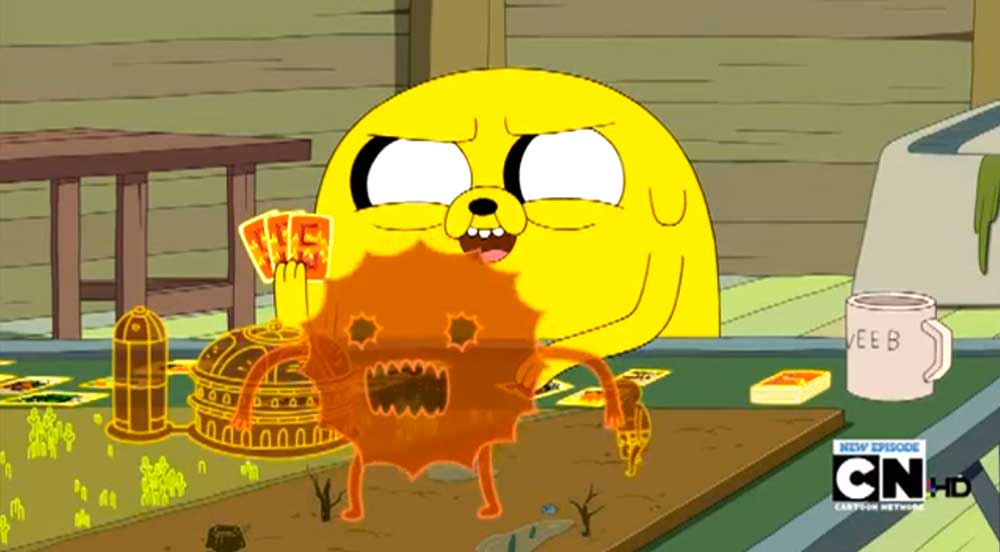 To sum it up with a phrase: if there is such a thing as a beer-and-pretzels CCG, Card Wars is it.

“Sprites and Dice is tops blooby!”