Almost immediately after watching the RWBY season 3 finale, I stumbled upon RWBY: Grimm Eclipse, currently in early access on Steam. Thinking that a good old fashioned beat-em-up might help to fix some of the shattered pieces of my soul that the finale left behind, I decided to give it a try.

For those of you not familiar with RWBY (that’s pronounced “ruby”), it’s an animated series wherein superpowered men and women called Hunters and Huntresses battle against terrorists, criminals, and supernatural creatures called the Grimm. It’s known for having strong and compelling characters, insanely over-the-top action, and a tone that covers the full range from lighthearted silliness to utter tragedy. 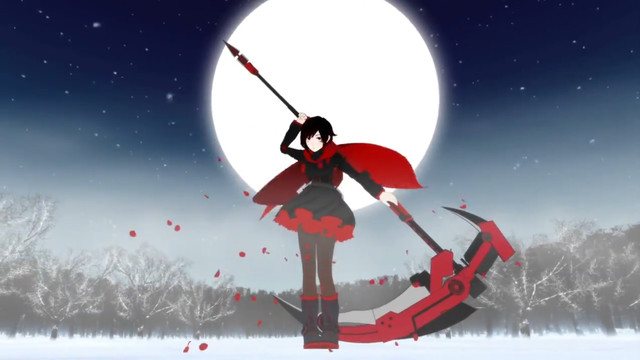 Ruby Rose, the leader of Team RWBY, wields the Crescent Rose: A deadly scythe with a rifle built into it. Because reasons.

First of all, RWBY: Grimm Eclipse appears to be very early access at the moment. It’s the framework for what could become a solid game, but there’s still a lot missing. That said, let’s take a look at what it already has to offer, with an eye on what is to come.

RWBY: Grimm Eclipse is a cooperative brawler along the lines of Marvel: Ultimate Alliance. Up to four players can select their personal favorite member of Team RWBY and go into battle against swarms of Grimm. Aside from some framerate issues at higher settings, the combat is smooth and intuitive enough that even first time players can experience the joy punching Grimm using gloves with shotguns in them. 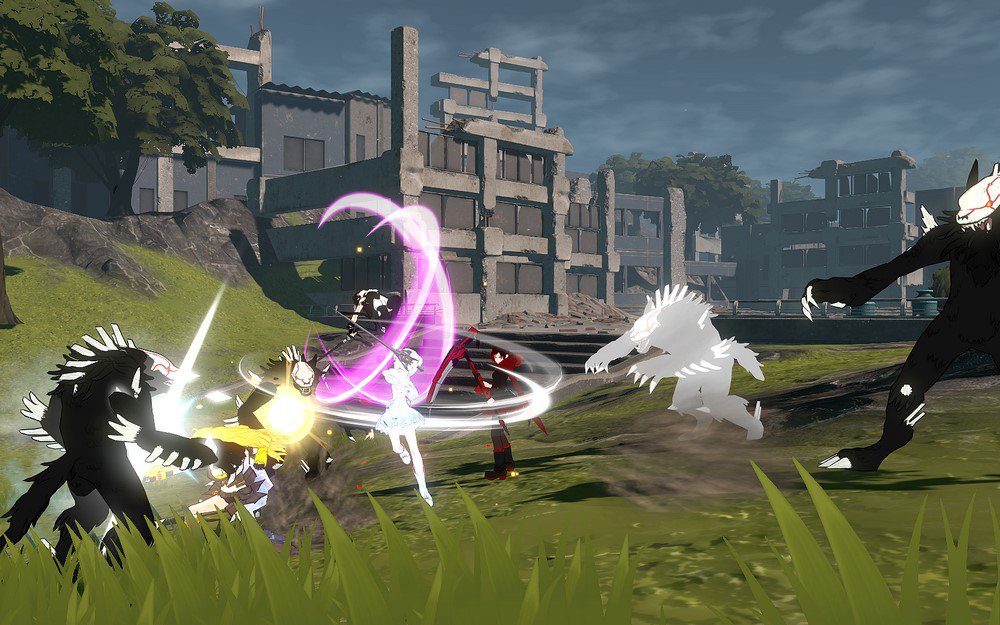 Crazy weapons, lots of explosions, and way too many Grimm. It’s exactly what you’d want from a RWBY game.

Each character has a few options for leveling up as they progress. I’ve only played as Yang so far, and her powers and abilities are certainly fitting for the character. Yang’s special ability in the show is to become stronger the more damage she takes (sort of like the Hulk, but not nearly as overpowered). In Grimm Eclipse, she has an ability that replenishes her special attacks when she takes a certain amount of damage, as well as a lot of self-healing powers to keep her in the fight.

As an official Rooster Teeth game, Grimm Eclipse is being worked on by many of the same people who handle RWBY, including the voice actors, and will be considered canon to the series.

As I said, Grimm Eclipse is still in the early stages of early access. It’s far from finished and is definitely rough around the edges.The framerate issues really hurt unless you’re playing on Potato quality (technical term), and the fact that the Grimm aren’t always quite where they seem to be. Then there’s the fact that so far the missions mostly consist of “go to place, protect thing from X waves of Grimm, go to next place.” It’s honestly a bit dull, and while RWBY is many things—silly, weird, sometimes a bit uncomfortable—”dull” is not a word that should ever apply to it.

Duking it out with a Clockwork Orange cosplayer; just a day in the life of a hunter.

Based on Rooster Teeth’s most recent announcement regarding Grimm Eclipse, it seems like many of these issues are already being addressed. Framerate issues and general performance are listed as priorities in all of their announcements, so hopefully we will see this issue cleared up soon. Combat is also being revamped with the addition of heavy attacks and counters, as well as new enemy attacks. Hopefully each new addition will take us closer to the blazing fast Devil May Cry-esque action that is the hallmark of this series.

Most exciting for me is the announcement of new campaigns being released in the coming months, with the promise of new missions, new enemies, and new lore for the series. This is where Grimm Eclipse really has a chance to shine, and where I hope to see my biggest complaints addressed. There’s a solid—if not exceptional—framework in place for the gameplay, but this game could live or die based on the story and the missions they come up with for it.

I really like what’s already in place, and I’m looking forward to seeing where Grimm Eclipse goes from here. I’m a big fan of RWBY, and I very much want to see this game achieve the same kind of over-the-top excitement and action that drives the series so well. Look forward to a follow-up article once some of these updates are in place, when I can get a better sense of what the finished product will be like.

Want to know more about Grimm Eclipse, or chat about which RWBY character is the best? Leave me some comments! Want more articles on upcoming games? Follow our Twitter, or find us on Facebook! We'll be checking up on Grimm Eclipse again.