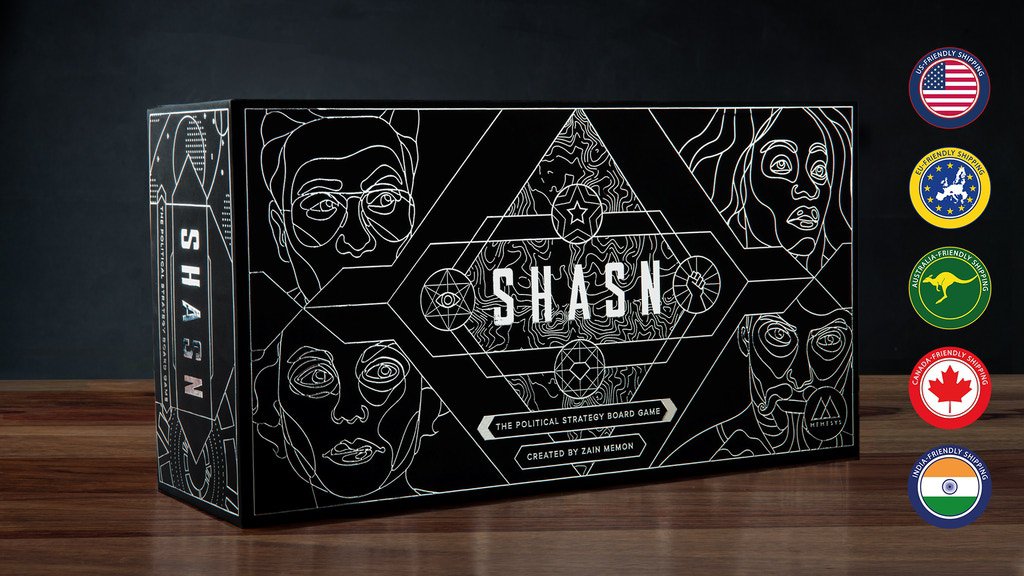 SHASN, meaning “seat of power,” is a Kickstarter coming to us out of Mumbai, India! It’s not often we get to preview games as unique as this, and if you know me by now you know unusual games grab me. Naturally, I couldn’t resist having a look at SHASN. What we have here is a game that’s one part area influence and one part ideological deduction. Define your campaign by the choices you make regarding key issues, and use the resources you collect to win the election.

What kind of governing body would you establish if you were elected?

Board overview. Pieces have an "S" stamped in one side that you flip up when you reach a majority. These pieces are now worth points.

For a game about swinging voters, establishing majorities, and boasting mechanics for things like gerrymandering, SHASN’s rules were surprisingly easy to learn. Each player’s turn begins with them answering an ideological question read to them by the player on their right; these question cards, with their double-sided yes/no answers, represent two differing philosophies on the issue at hand, say whether rural areas should be repurposed for the disposal of nuclear waste. You answer the question, possibly amidst some discussion around the table about that actual political issue, and you’re rewarded with three resources that fall in line with your answer. You then take the card and slot it under your player board, your manifesto, denoting which ideologies you are gravitating towards. The Capitalist is all about business, the Supremo thrives on cult of personality, the Showman pulls public perspective via the media, and the Idealist builds trust through strong morals.

As the game progresses, players will spend their resources (representing funds, clout, media, and public trust) to get voters, their player-color pegs that are slotted into the recessed board. Once a player has a majority in a voting district, those pegs are locked in and count as victory points at game’s end. A game is over when all districts have a majority (the regular ending) or every peg slot is filled (the game timer). Players can also spend resources on special “conspiracy” cards, allowing them to take unique actions to boost themselves on their path to victory or hinder their opponents. There are other rules for gerrymandering (manipulating votes by moving your pegs or those of an opponent) and coalitions (combining your pegs with another player’s for majority purposes), but those are the basics. This game is shockingly easy to learn and jump right in to!

Featured is the player board (manifesto) with tucked cards. Also this game can be played on an uneven set of tables with no issues!

SHASN reveals itself in layers. You can’t gerrymander voters until you have at least one district under your majority, so do you find a quiet corner of the board to stake your claims or immediately get in another player’s face and battle from the start? Coalitions were underused in our games, but in hindsight they make a great way for players to pool their resources in stopping a runaway player. Mixing in districts early doesn’t necessarily mean being permanent adversaries; sure you get less overall points for splitting a majority, but getting something while denying the leader is certainly a viable path to the win. Then again, sharing a majority denies you the aforementioned ability to move pegs around with gerrymandering. It’s a fine balance, when to strike out alone and when to seek help.

As you accumulate ideology question cards under your player board, you’ll unlock certain bonus powers within the four personality types. This is where you ramp up the engine you’re building. Players get a bonus resource for every two same-colored cards slotted into one of the four ideologies, so by late game you’ll be taking in tons of extra resources you’ll need to solidify those last, precious votes. So the strategy is to spread out and get a mix, right? You could, but the game also rewards you with special abilities if you get four (and eventually six) cards in one ideology; these abilities give you powerful boosts and even let you move those locked-in majority voters, usually immune to movement and replacement effects. Just as you think you’re solidifying the race, a new wrench is thrown at you, and it’s adapt or perish.

The art is clean and functional. The voter cards here depict which resources you'll need and how many voter pegs you earn when purchased.

The Ups And Downs Of Politics

This game has a lot going for it besides its novel theme. The rulebook contains good examples and reminds of key concepts at several points throughout, helping you not to forget the important bits. I always love when rulebooks do this, and there’s also a separate reference book just for the special abilities of the cards. The theme and mechanics intertwine nicely, and everything abstracted as it is still feels like what the game says you’re doing. Ideology cards pose interesting questions, and the fun of trying to balance issues you want to take a stand on versus needing to answer in certain ways for want of resources you’re not producing makes for a thought-provoking experience. You have control over your player board as well, your manifesto, and the strategy you take from the beginning; the only luck involved is in what cards come off the deck first and what one friend does to another. The board is recessed so voter pegs don’t slide around if the table is bumped, and the box includes several really nice components, as well, like a small container with a magnetic latch for the deck of ideology cards you pass around the table.

In fact if you’re looking at the price tag on this Kickstarter, from the game we were sent it seems you get really nice production quality in your components. The box is laid out in striking silver of the game’s stylistic artwork, the magnetic clasps on component boxes feel really good to use, and the recessed main board is a welcome addition. This game feels luxurious, and yet for a very reasonable $59 you get a backer level that won’t break the bank. If you care about getting 4 campaign decks of ideology/conspiracy cards instead of just two, the $89 backer level will add US 2040 and Rome 40 BCE to your US and India 2020 campaigns. How much is too much is up to you, but I think $15 per “expansion” is a reasonable price, and it’s nice to see backer levels for different buyers.

And I will say that, as far as plusses for SHASN go, if you’re concerned about what happens after you’ve seen the ideology cards so many times that guessing at their resources won’t be a challenge anymore, I’m pleased to say that I think there’s enough game in this box so the overall strategy and tactics of play will still keep you engaged.

Even in good lighting, one issue we found was distinguishing the black pieces from the purple ones.

And yet, I will say on the record that I think this game definitely isn’t for everyone. One of our friends had a very valid point in that she found it very hard to divorce her ideology choices from her actual views; and in a game where you need all the resource tokens at some point, if you find it hard to pull away and make decisions towards winning the game (i.e. I need another Capitalist card even if I think affordable housing shouldn’t be corporately run), you’ll learn quickly that picking the nice choice every time probably won’t earn you that win. You could possibly trade with other players for what you lack, but doing it all the time is like boxing with one hand tied behind your back and your opponents yanking on the rope whenever they want. While I will say that SHASN provides a respectful look into the material it simulates, if you can’t ultimately play it like a game it might end up getting under your skin.

Our biggest common concern was with the overall pace and length of the game. It’s currently listed on BoardGameGeek as being 1.5 to 2 hours in length, and I’d say that’s pretty accurate. Turns are snappy, but it takes several around the board before the first districts develop majorities and player boards begin churning out free resources and special powers. This game definitely has a ramp-up to its arc. Some of our players were left wishing it built up faster or played in less time. I think it passes enjoyably, but I appreciate that varying mileage is in the eye of the beholder. It can be epic, the swings and power plays, the desperate deals people make. It’s just good to know what kind of timeframe you’re committing to when you sit down for a game.

Some other small points were that we found some of the special ability and headline cards were a bit vague, even given that there’s a reference book specifically printed to address these FAQs. Ultimately they weren’t make or break, and in the spirit of the game we all took a vote on how to interpret these rules issues. Two of the player colors are also very similar: black and a dark purple. These issues may be addressed in the final printing of the game or they might stand, so just keep in mind what you see here is after all a preview.

And of course, with all this said, SHASN is a very interactive game. You’re meant to be making deals, swapping resources or forming coalitions. Or breaking coalitions. Or bursting out of nowhere with hidden conspiracy cards to snatch districts from the jaws of your opponents. If someone takes your voters away, you’ll need to take them back or foster a large enough base that it won’t matter! If you want to play solitaire in your corner of the board, this definitely isn’t your kind of game.

The token tray included in the game also sports a magnetic latch.

I can’t remember where I first heard it said: all simulations are inaccurate, but some simulations are useful. SHASN feels like it definitely does what it sets out to do. The game, with its clean, stark, and still lovely artwork feels heavily thematic. This is a sandbox that lets you play around in the two biggest democracies in the world. It’s also tense, and it’s fun. I came away from my preview play time with mixed feelings, but having a few days to think on the game I can’t deny that I’m left with the overwhelming urge to keep playing it. Like a real election, there are a lot of subtleties to digest in this box. If you’re interested in giving SHASN a further look, you can check out their Kickstarter here.