A Perennial Title For New Gamers And Vets Alike 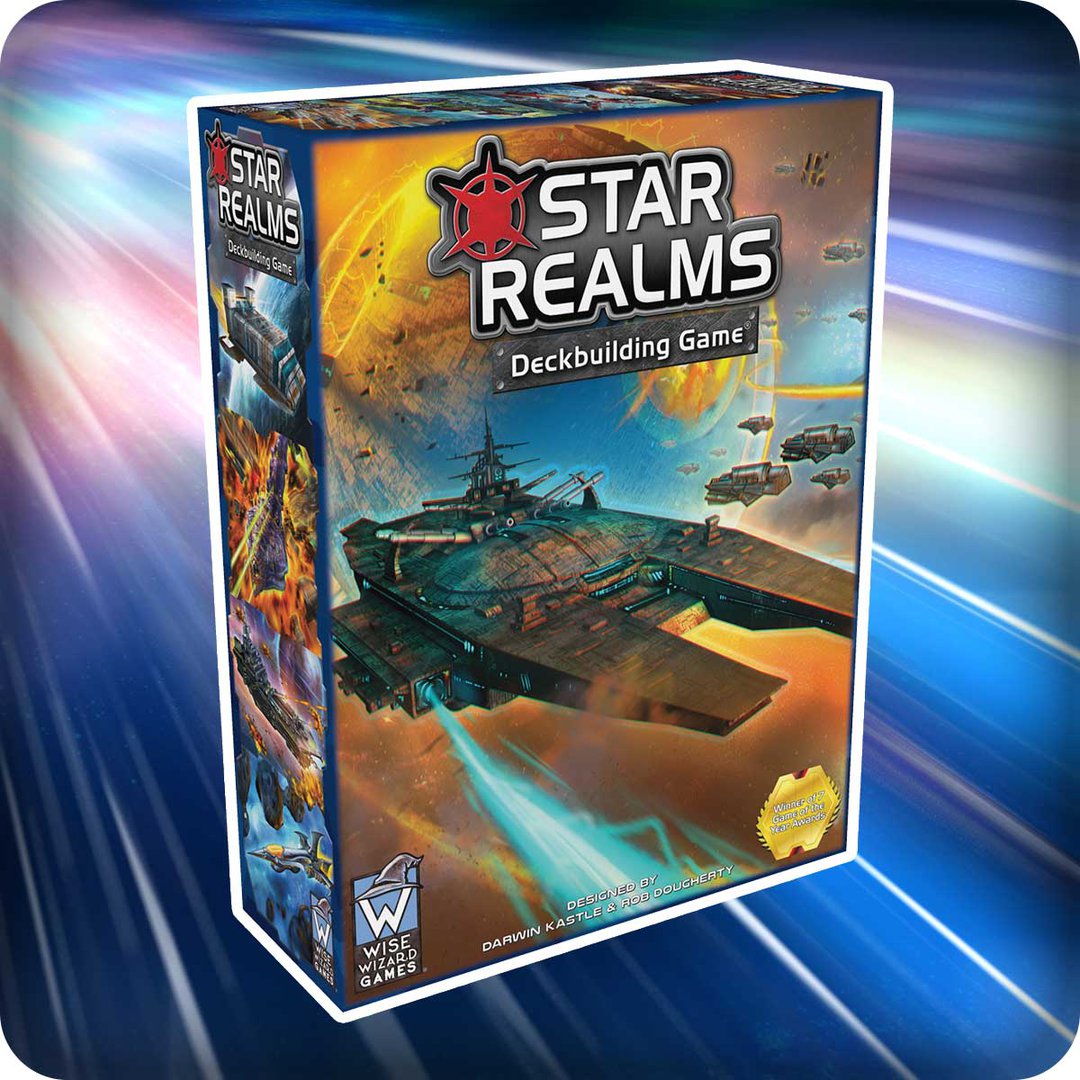 If you know me, you know by now that I love looking at both hot, new games we all can get pumped about as well as older titles coming back into the spotlight. The new Star Realms starter box, published by Wise Wizard Games, is one of the latter. I love games like this! Sure, the thrill of getting a brand-new game is always sweet, but sweeter still is the feeling of purchasing a title you know will sit with honor on your shelves for years to come, played so much that the corners of the box are practically falling apart.

Whether you’re already a fan of Star Realms or a newbie looking to get into this evergreen title for the first time, there’s a lot to love here. In fact, I’d go so far as to say the future of Star Realms has never burned brighter! Let’s take a look. 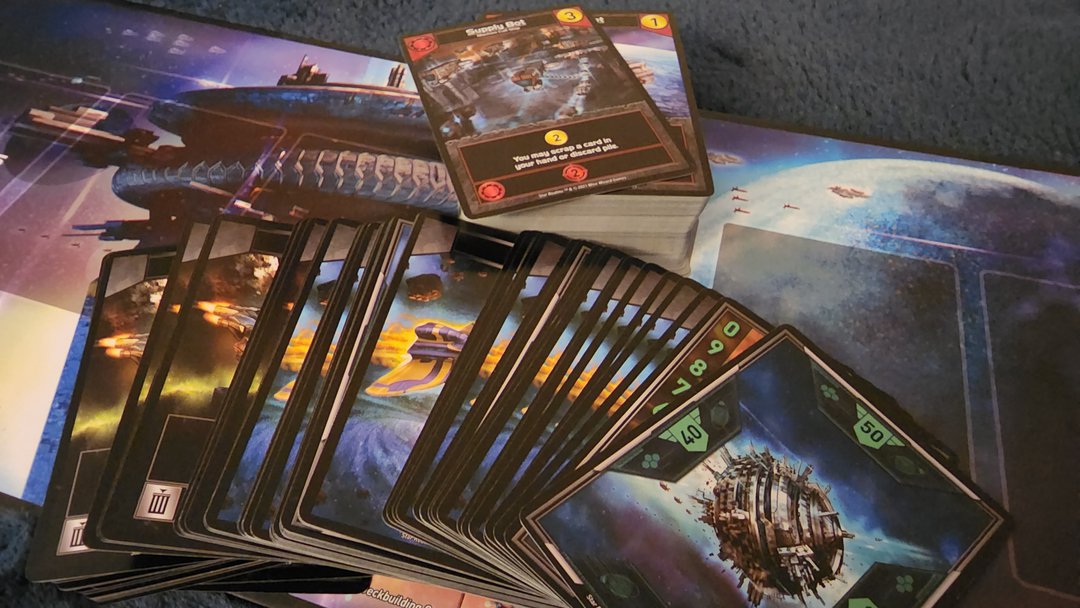 You get a generous amount of stuff in this box. A perfect way to start your collection!

If you’re unfamiliar with Star Realms, I’ll give you a brief rundown. This game is a deckbuilder, meaning you start out with a very small deck of very basic cards, and you build up to something mighty across the span of about 20 minutes. You’ll use your basic cards mostly for “money,” purchasing cards out of a cycling central market, slotting your new purchases into your discard pile. Each time you reshuffle your deck, it becomes more powerful. Naturally, some cards work better with others, boosting your attack, your economy, and even allowing you to trim cards out of your deck permanently, ensuring that each hand you draw has more and more of the good stuff in it. In Star Realms, the game is over when your attack cards whittle your opponent down to zero life points.

Of course, this basic formula gains all kinds of spice through the cards you shuffle into the deck. This game was originally published in 2014, and over the better part of a decade it’s received literally dozens of expansions and promos. That can seem like an intimidating prospect for new players, a veritable landslide of cards to get up-to-date on, but it doesn’t have to be. You see, I think games like this are perfect for new gamers looking to get the most bang for their hard-earned buck when building a board gaming library. 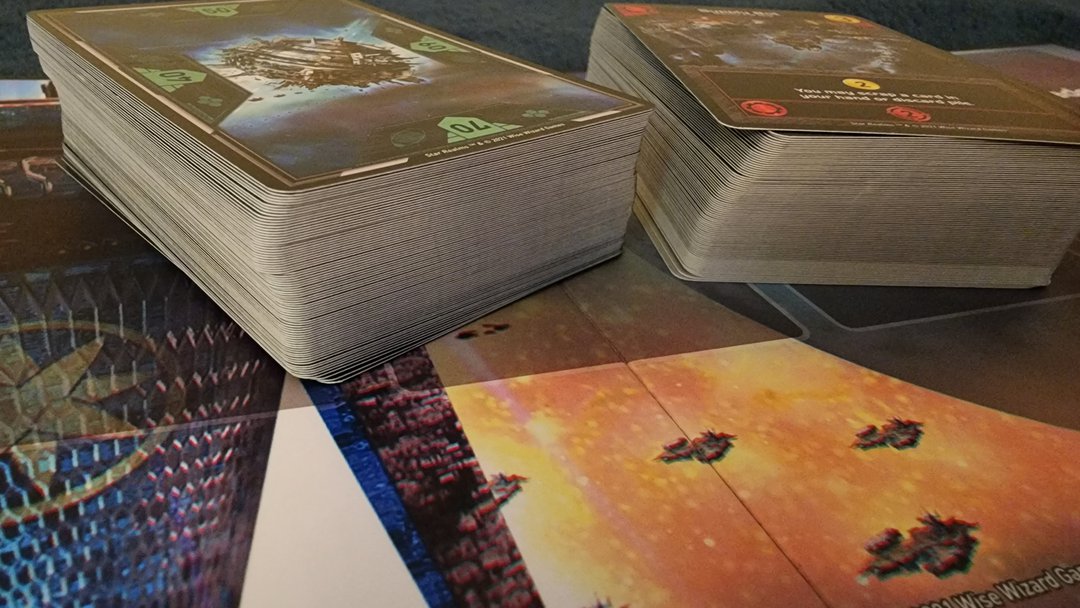 The thing you have to realize about Star Realms is that you don’t need to go all-in and buy everything at once. You certainly could, and power to you if that’s how you roll. But this is a game that you can buy as much or as little of as you want. You can get a few things to spice up your base game and keep it simple, or you can get a variety to cycle in and out as you play. To that end, the new starter box set comes with a generous yet manageable spread of goodies: you get all the cards from the Core Set and Gambit Set, plus a game board and two additional starting decks (allowing you to play 2-4 players from the get-go). For coop and solo play, the Nemesis Beast and Pirates of the Dark Star challenge cards are also included. All of this comes in a sturdy box with a molded insert, ensuring that if you choose to buy more you will have the perfect storage solution. The insert can fit sleeved cards, though of course this will somewhat diminish how many cards fit in the box overall, and the box itself retains a modest size which is a welcome bonus on my shelves.

As starter sets go, this one ticks all the boxes. You get the core game and a few extras for when you’re ready for a bit more. You get some “deluxified” stuff in the board to set up in the center of the table (you don’t strictly need this to play, but it makes the experience nicer). And you get a practical and size-minding storage solution with expansions in mind. For a game that’s been popular for years and continues to receive support, beloved by many, easy to teach and hard to master, quick and snappy to play and always engaging, you really can’t ask for more in a starter box set. It’s never been easier or a better time to get into Star Realms if you’ve had your eye on it! 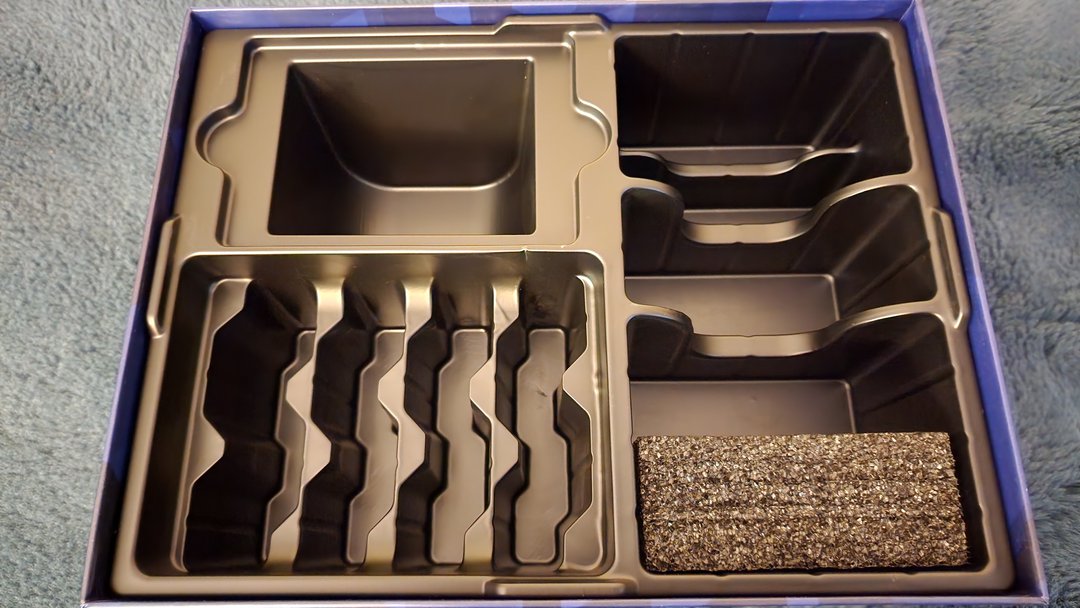 The insert is functional, thoughtful to a growing collection, and still fits in a box that's small enough to respect your shelves.

What if you already own a large box of Star Realms? You didn’t think I’d leave you with nothing new and exciting, did you? While at PAX earlier this year, I had a chance to speak with Wise Wizard Games about their plans for Star Realms and an upcoming expansion. Rise of Empire is a standalone addition to Star Realms that will add a legacy-style campaign. That is to say, as you play you will “build” cards by adding stickers with various powers to them. Cards that start off run-of-the-mill will become something unique to your set as you play through the included campaign scenarios.

By campaign’s end, your cards will have grown into special combinations of abilities, a record of your path through its adventure. These cards are then combinable with your regular Star Realms set so you can keep playing with them as much as you like. Perhaps legacy games, one-time campaigns that forever alter your copy, are nothing all that new in the board game space anymore, but in this case I think this is a brilliant move. For a game that’s nearing a decade in age, venerated and elderly by our collective standards, and for which a veritable dragon’s hoard of expansions have already been released, how do you keep things fresh? I think we’re long overdue for a campaign addition. I also think the draw of unique cards built through such a campaign offers something especially keen to a collection that could already include hundreds of expansion cards.

Star Realms: Rise of Empire is listed as a 2023 release for any who want to keep an eye out for it. If you already love this game and own a ton of it, I could easily see this being the cherry on top of your box set.

The included board lends some nice artwork while giving you a flat place to lay out the card market. A good travel game? I think it's perfect for a hotel bed.

What’s In The Box

Whether you’re new to Star Realms or someone who’s cycled it onto the gaming table periodically throughout the years, Wise Wizard Games has shown that there’s still so much to love here. Their new starter set makes a fantastic entry point into this game if you’ve been looking to get it, and with the legacy campaign around the corner there’s a lot still to look forward to. Or you could go somewhere in the middle, picking up expansion packs as you please. There’s no wrong way to go about it, but one thing remains certain. If you plan to start fresh with Star Realms, this new starter box is a perfect place to begin.