Here There Be Dragons

Pirates Dragons Treasure (PDT for short, because pirates are illiterate) is an appropriately-named card game where pirates compete to slay a dragon and take its treasure. It’s a light blend of resource management, social deduction, push-your-luck, and “take that” that just about anyone can learn and play pretty easily. I had a chance to play it on the PAX Unplugged show floor, and enjoyed my time with the theme and gameplay that I wanted to play more.

You start PDT by choosing a Swashbuckler, the most piratey pirate at the table, to handle the setup. Each player gets 5 cards, then the Swashbuckler draws a dragon card to determine who you’ll all be hunting down this time. Finally, each player chooses a class for their captain, which will provide some small advantage in gameplay; this can be a bonus to armor during attacks, an bonus to attacks to encourage aggression, and so on. 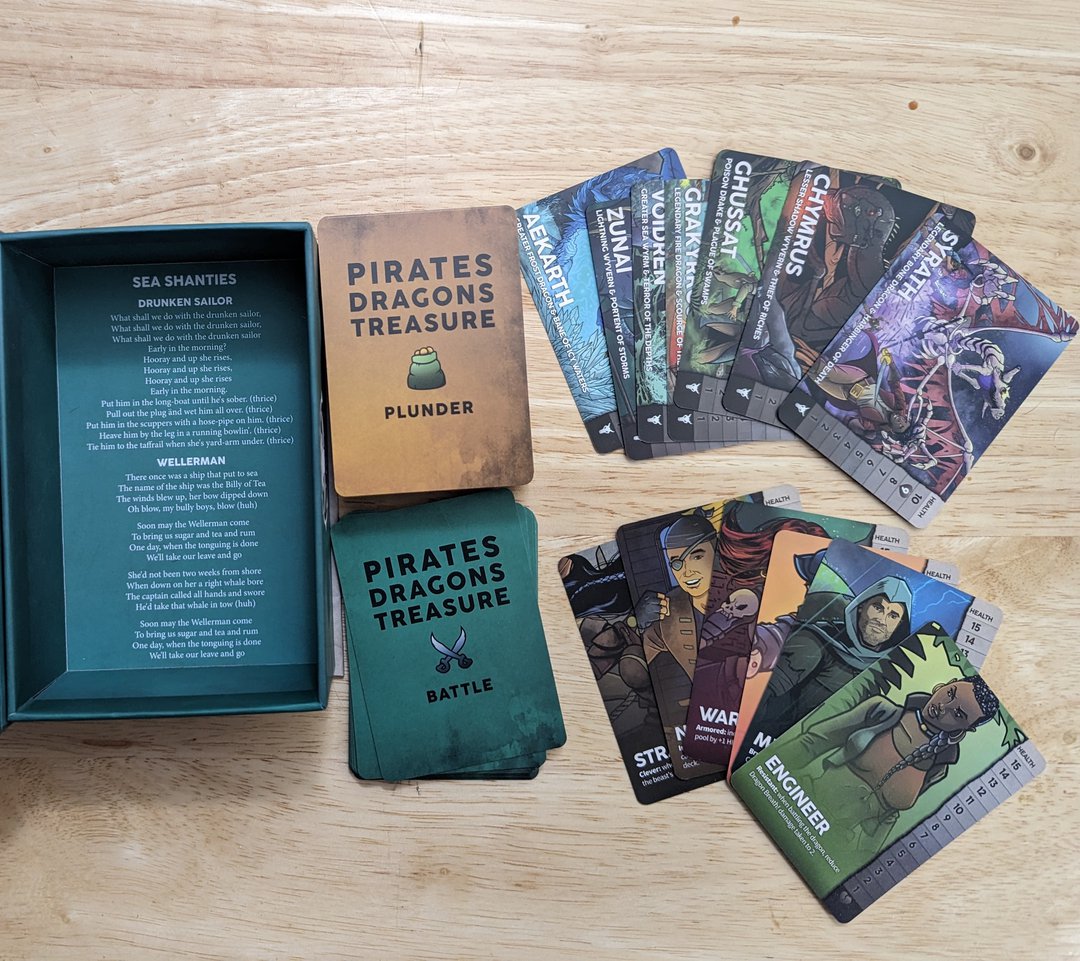 Although maybe letting the most vicious, cutthroat blaggard set up the game isn’t a great plan?

Each turn in PDT has three phases:

If you’re not ready to fight, your turn is over after your Decisive Action. You pay for your upgrade and pass the turn to the next player.

If you did choose to attack, you enter a War-like minigame against the dragon. Basically, you and the beast take turns flipping cards from the Battle deck and applying their effects until one of you ends up in Davy Jones’ locker. 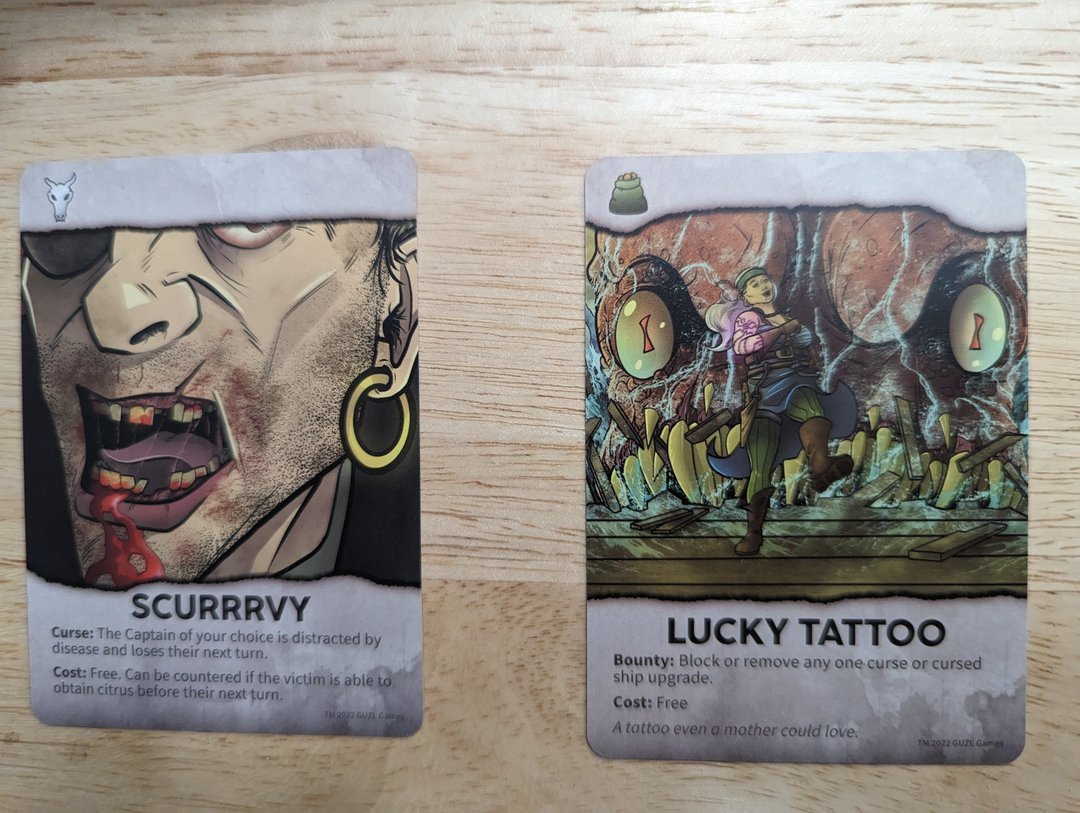 Bounties and Curses throw some exciting twists into an otherwise straightforward game.

The good news here is that, like the scurvy dog you are, the captain doesn’t go down with the ship. Losing to the dragon means you discard your crew and all of your upgrades, but you keep the cards in your hand and can start rebuilding on your next turn.

If you defeat the dragon, then you win! You claim the dragon’s treasure and presumably spend the rest of your life as a fabulously wealthy pirate king, while your opponents wallow in obscurity and poverty forever. This means there’s also a push-your-luck element to PDT: You want to wait until you’re strong enough to kill the dragon, but not wait so long that someone else beats you to it.

And finally, remember that pirates don’t play by the rules. It’s only cheating if you get caught!

Overall, Pirates Dragons Treasure is a solid choice for casual gamers, as a palate-cleanser for game night, or as a gateway card game to lure in your friends who like pirates, dragons, and/or treasure. I think the extra rule that sort of encourages rule-bending unless someone calls you on it really cements what this game is going for: good fun that's meant to cause some laughs and dramatic moments. With games only being about 20-30 minutes, you shouldn't be worrying too hard about analysis paralysis or who actually wins. 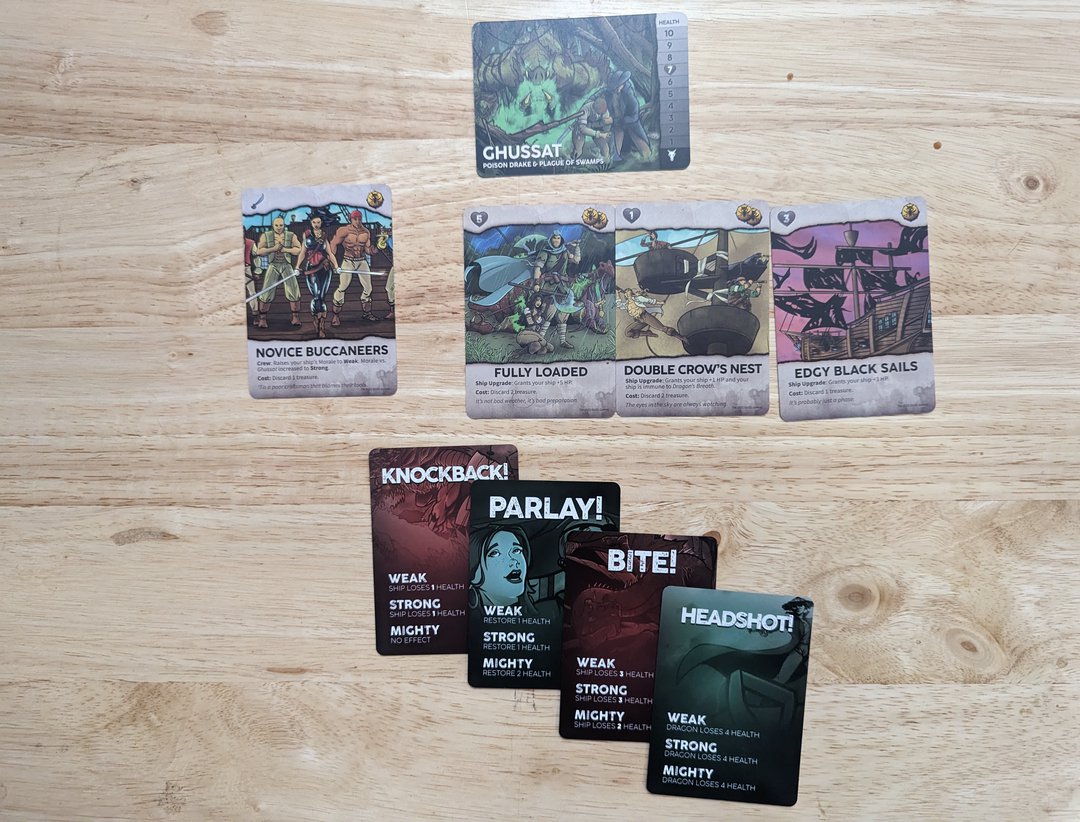 Morale is key in battle—it bolsters your attacks and weakens the dragon's attacks.

Not All Smooth Sailing

While I like PDT overall, I do have a couple of issues with it that bear mentioning.

To begin with, the first player has a definite advantage, and there’s nothing in the setup to offset that. This one is really more of a nitpick, since Curse cards will tend to balance out the game as other players target the ones who are doing the best.

Second, once somebody engages the dragon, there’s nothing for the other players to do except wait and see who wins. It would be nice if the others could participate in the battle somehow; of course, allowing that without creating Munchkin-style endgame dogpiles could be tricky. 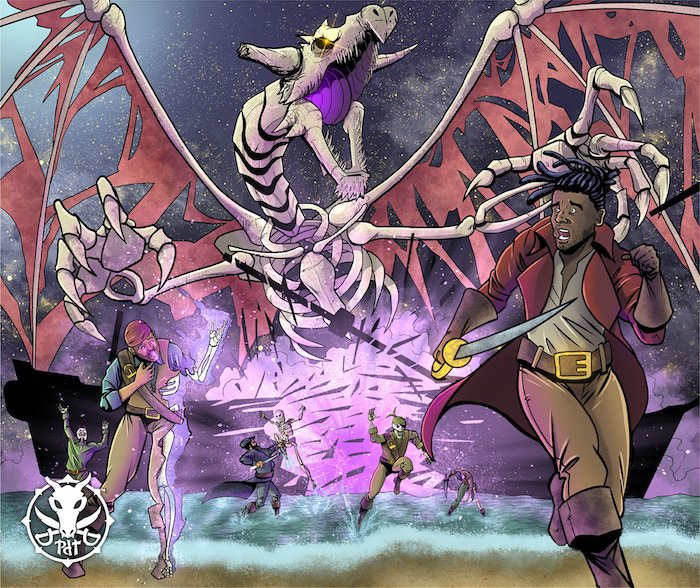 And finally, a word of warning from the designers, confirmed by my own experience: You can play this with 2 people, but you’ll want to have at least 3. The more social aspects of PDT don’t really work when there are only 2 players, so the overall experience is a lot less exciting and a lot less fun.

It’s worth noting, however, that PDT is the first game from Guzl Games. Minor problems like these are the kind of thing one might expect from inexperienced-but-passionate game designers.

Is The Booty Worth Buying?

Pirates Dragons Treasure is easy to learn, quick to play, and everyone’s bound to love at least one word in its title. In spite of some issues, it’s a strong first outing from Guzl Games. If you don't take the games too seriously, its definitely worth taking a look at. Using it at parties or at hang outs at bars where you can't settle into heavier games might be your best bet. Also if you are a die hard fan of pirate themed adventures, the art and style here will be enough to grab you.

The standard edition of PDT carries a reasonable price tag of $34.99. But, if you’d like to try it out first, you can also download a print-and-play version totally free. Good luck on the high seas, and good luck hunting!