Evolving The Reach of Digital Tabletop

This might come as a surprise to some of you. I was a public school teacher and tutor for much of my time following undergrad and graduate school. I’ve always felt particularly close to the topic of education as a result, and so when I learned that North Star was releasing an education build for their Evolution board game app, I was all over it. I’ve been waiting for literal months to get my hands on this one, and I could not be more excited to talk about it now.

Whether you’re a board gamer who enjoys packing apps for the go or an educator yourself, looking for ways to make the classroom just that little bit more engaging, I hope you’ll find this look into a cool digital adaptation of a much beloved board game—well—educational. Jokes aside, let’s see what’s on offer! 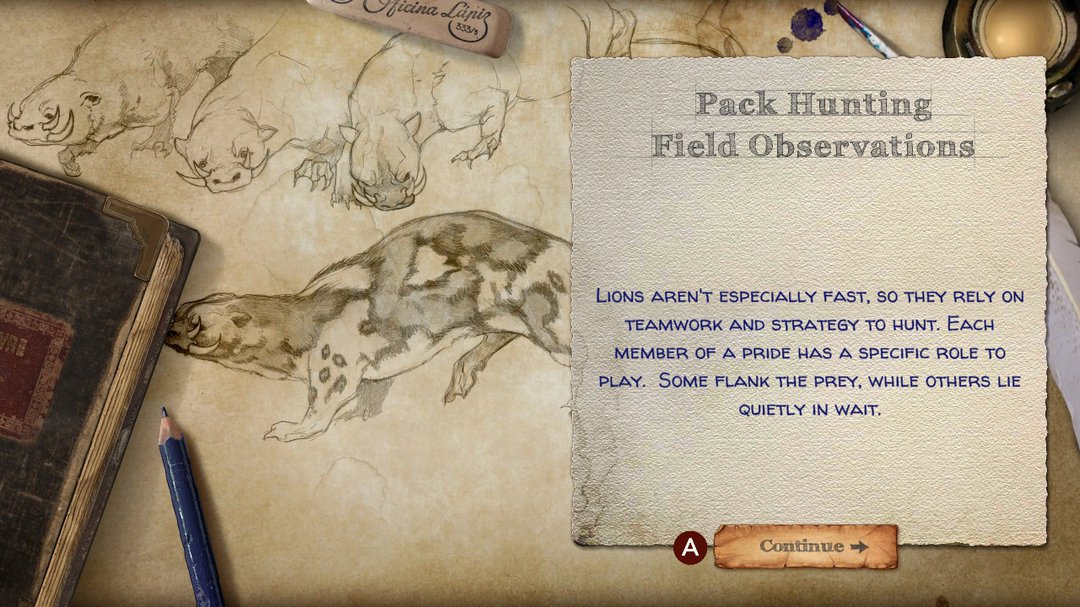 In addition to the added features in the education build, the game throws out educational bits during loading screens as well.

If you’re not familiar with the original board game, Evolution, here’s the quick rundown. Players play from a hand of cards to create and adapt new species on the table in front of them. Cards can be played to increase species population or their overall size (which affects who can hunt them), but they can also be played for their traits like a hard shell or long necks. Herbivore species compete over a limited food supply in the center of the table, and carnivores instead eat other species for food (even that players' own other creations). Each food eaten is worth a point at game’s end, and the player with the most points wins! A perfect little model of creatures evolving in a system of “eat while trying not to be eaten.”

Moving on to the digital adaptation of this game, if you’ve seen some of our prior reviews on board games gone digital, for example my coverage of the beloved woodland wargame Root, you know that while it's great to see a digital adaptation to take on the go with a smartphone or tablet, we love seeing just a little bit more. A good digital adaptation of a game should give that game new life. Characters, music, sound effects, visual effects, they all contribute to making the game more than its cardboard counterpart, and it’s an absolute joy to watch a beloved title “come to life,” so to speak. You’ll be pleased to hear that Evolution’s digital adaptation is everything you’d expect from a top quality board game app!

This game really comes alive, from the pleasant music playing in the background to the animations as your species evolve into predators, growing claws on the edges of their paw-shaped tiles, growling and swiping at other tiles when they hunt for food. Green food bits are sploshed into the central feeding area at the start of a round and actively gobbled up during the feeding phase. The species “paws” themselves have easy to read slots for cards, allowing you to sweep the table at a glance or zoom in and examine things one bit at a time if needed. The game is both beautiful and functional, thematic and thrilling. Top marks all around! 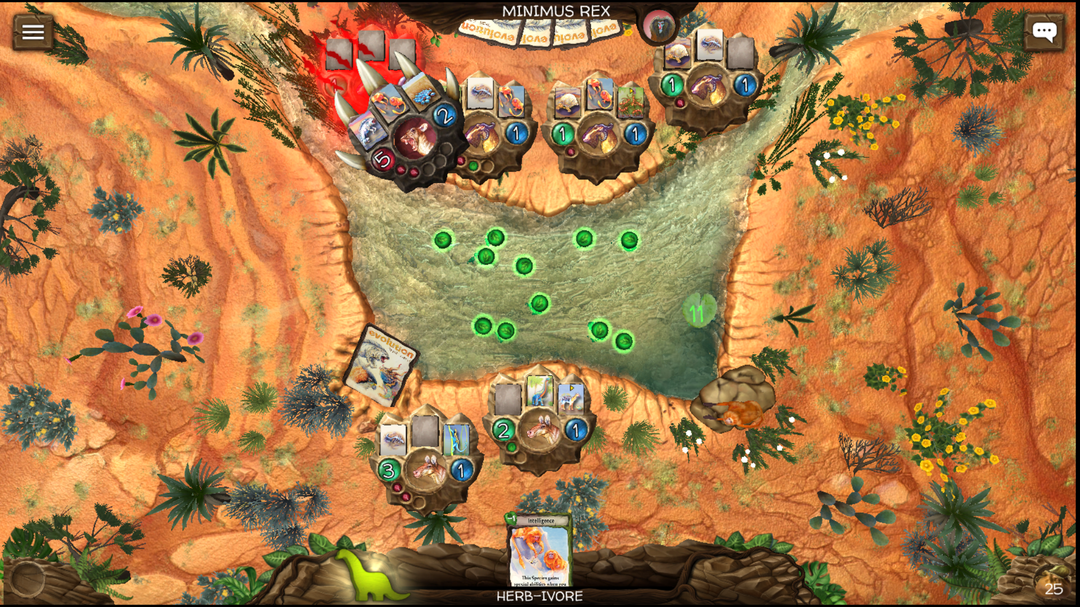 A shot of the digital board. Predators feed not on the plant food in the pond but on the other species themselves!

Back In The Classroom

Of course, the app for Evolution has all the staples you’d hope to find in a digital release: there’s quick play, pass and play, a campaign mode (which sees you spanning across a fictional continent with different zones, card combos, and themes), and a decent AI to bash your brain against when you’re solo. If you’re new to the game, it does a fantastic job of showing you what’s what, giving you time to dip your toes into the waters of that frenzied feeding pool, learning your warning calls from your apex predators, as well as the sleek digital interface. But you’re not here just for all that, are you? What does Evolution’s education build add, you might be asking, that makes it such an exciting addition? Quite a few things, actually!

In addition to the already wonderful gameplay, in which the concept of evolving traits and out-competing one another is core to the mechanics, the app also boasts 21 different ecosystem “levels,” teaching players and students about new survival strategies. Real life examples of traits are given alongside the game’s cards, allowing learners to see facts as well as actual examples of creatures in the wild who exhibit the traits they’re playing with. There are locks on chat controls in case players seek games online, and there’s easy account switching, allowing students to keep profiles of their own on public machines. The game is also supported across Windows and Mac equally, along with iPads and Chromebooks, so no matter what hardware is in your classroom, it probably runs Evolution. A very cool little touch to round it all out is that players receive a pencil sketch at the end of their games depicting one of their created species, a fictional illustration of something that combines the traits they’ve just blended together!

Also of note, special pricing discounts are available when buying in volume for a classroom worth of machines. A classy move that I’m sure will be appreciated by many educators. 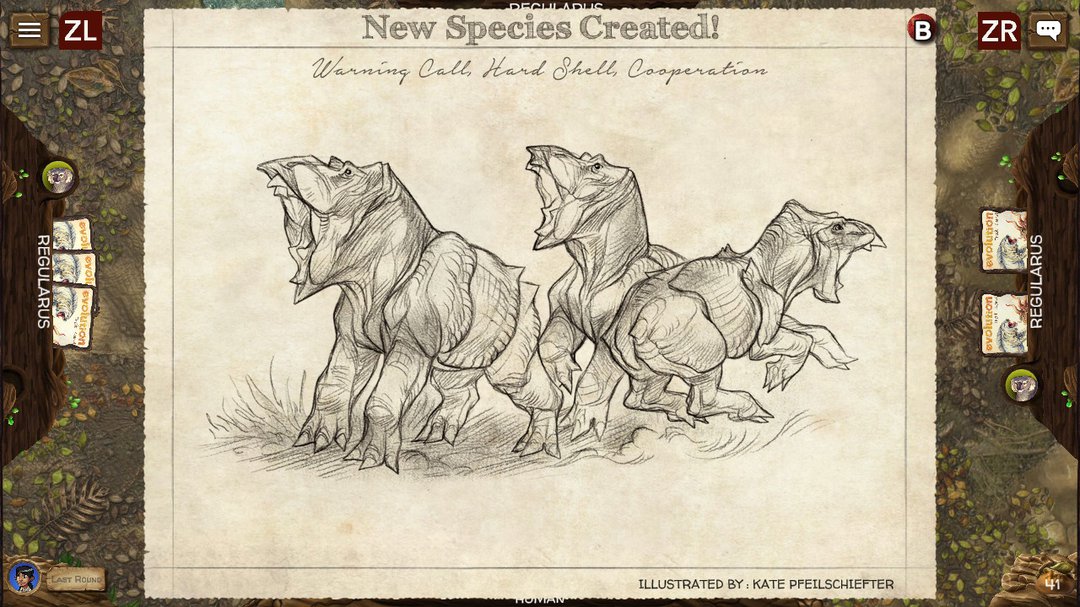 The species I created in my first game: warning call, hard shell, and cooperation. Plus a decent body size (to stop predators)!

As an educator, I understand that engagement is everything. Keeping a subject fun and exciting drives so much more within a classroom than just reading textbook chapters in turns. Clever board gamers, who also happen to be teachers, already look for ways to bring this beloved hobby of ours into the walls of their workplaces. After school clubs, thematically appropriate games or mechanics, these are all ways I’ve seen folks spreading the joy of cardboard with their students. Still, it can be tough finding enough games to fit an entire classroom of students who all want a turn. Evolution shows that there’s definitely still plenty of space in schools for digital games-as-educational-supplements. Go ahead and check out North Star’s site on the education build. They’ve even got a link with some lesson plan materials!

Frankly, I love what North Star has done here. They’ve taken a game that was already great as a digital app and expanded it even further. Evolution really feels like it’s living up to its full potential. I hope this opens the door for more game publishers to see the reach their games can have with young learners. The educator’s heart in me soars to think of classrooms everywhere blending digital tools, games, and hands-on learning aids. Think of what we could accomplish with students when we have even more wonderful resources like this! I’ve resisted making the pun up until this point but—well, I think we could be looking at an evolution of educational materials right here, right now. If you’re an educator yourself, I hope that maybe you’ll find a way to make this work where you work. And hey, even if it doesn’t make it into your classroom, maybe it can at least make an appearance in your home.