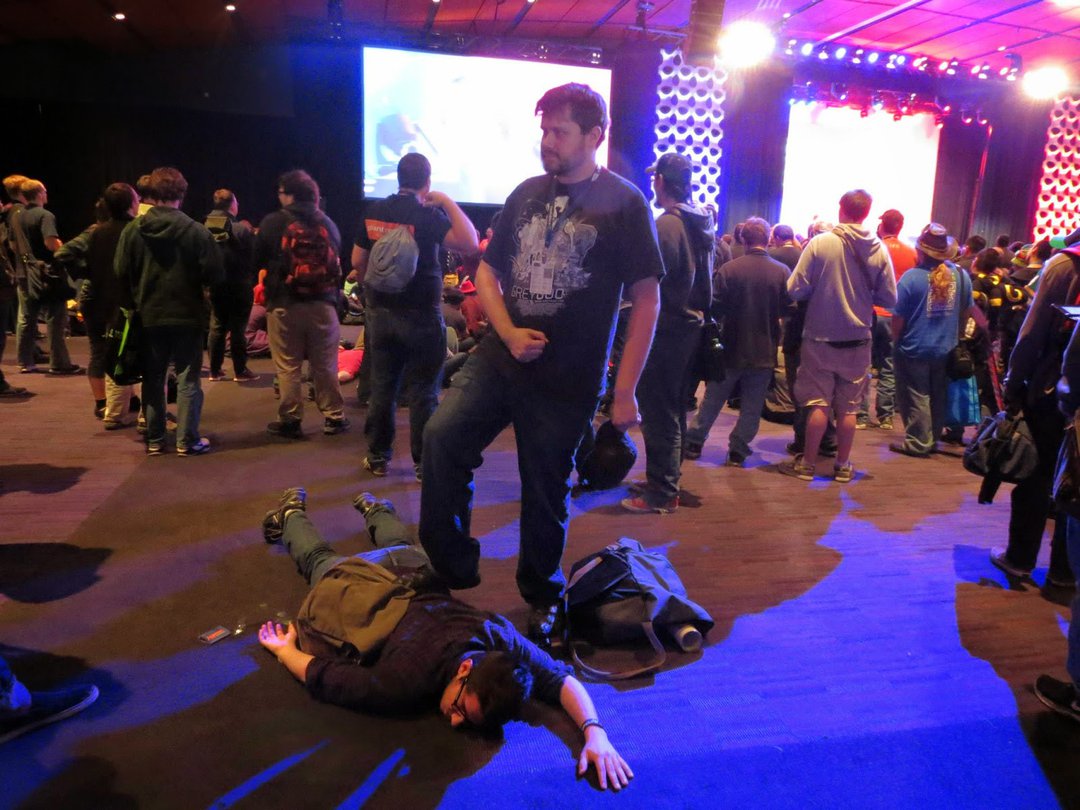 Last weekend marks the third PAX East I've gone to in a row. Three years have made some things easier: I know the importance of being online the second three-day badges drop. Our group is extremely well organized in making sure everyone gets a ride to Boston. If there's a popular panel or booth I want to be at, I know to be there two hours early or not bother. Of course, I'm still never truly prepared: after wandering around the convention floor for three days like an excited puppy, I still only scratched the surface of what I wanted to see. I missed tons of things that I had initially been excited for before the con: Zoe Quinn's panel, Hotline Miami 2, friggin' Hyper Light Drifter... but what I DID see really lifted my spirits

I know the huge "welcome home" sign in front of the convention center is nothing more than a sign to most, but this year I've really taken it to heart. I spend a gigantic chunk of my time day to day online. Whether it's listening to gaming podcasts, writing about games, or most likely scrolling through my Twitter feed, a huge part of who I am is thanks to an internet connection. Even among close friends, I have trouble finding people who care deeply about the same stuff that I do, which often drives me to post about it online. Once I'm at PAX, all of those feelings go away. Conversations with other just click. I don't have to spend my energy explaining things in layman's terms, but instead get in depth talking about what I love. Of course, being with friends, I can still excitedly exclaim "I just saw Hamza Aziz, Nika Harper, and RedPandaGamer pass by!" and get nothing more than a "Who?" - but hey, I feel like I'm in my element.

Speaking of being in my element, I found it easier than ever to start conversations with developers this year. Maybe it's because I'm more active than ever on Twitter, maybe it was the box full of business cards I was toting around, but I was determined to make the most out of every single day on the expo floor. On Thursday night, I kind of accidentally came up with one of the most effective icebreakers ever - instead of getting a photo or a signature from all my favorite developers and artists, I figured I would take my stack of blank Cards Against Humanity cards with me and have them all create their own cards for me. On top of this, I tweeted most of them throughout the weekend, and one even made it onto Christine Love's blog. 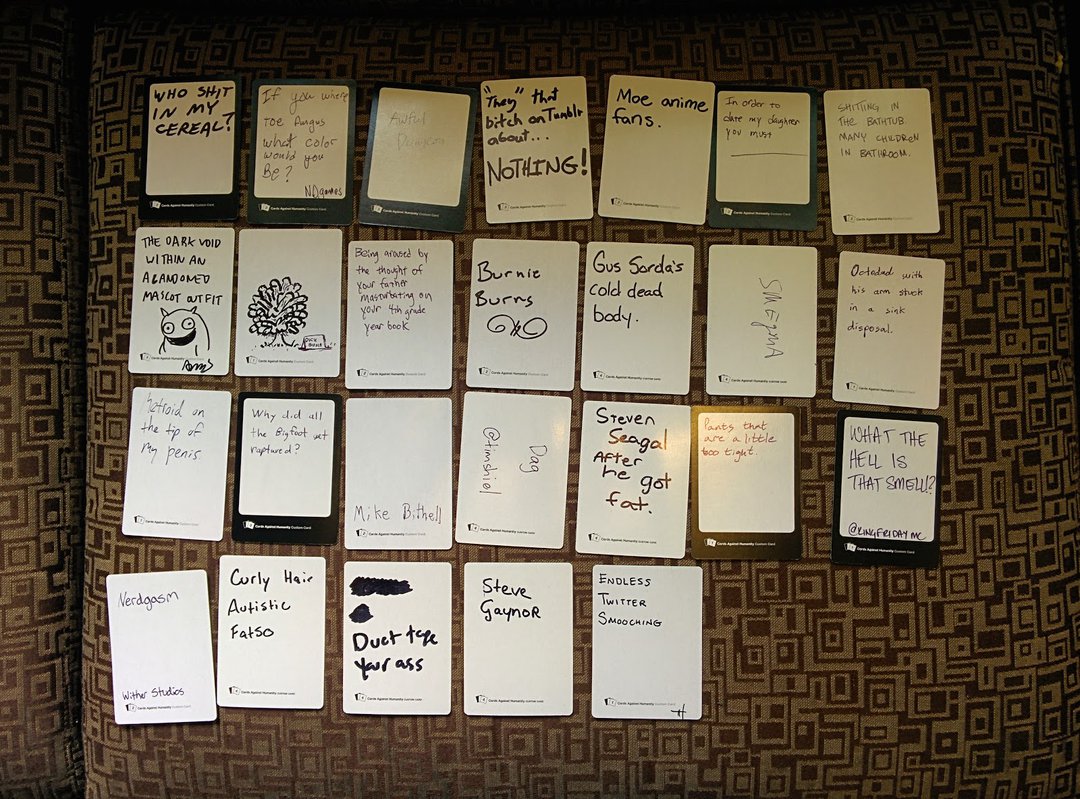 The full collection of cards! Ryan Weimeyer, Tommy Refenes, Kevin Zuhn, Rami Ismail, and Maya Kramer are just a few of the lovely people who signed these.

To take it a step further, I tweeted most of them throughout the weekend. What I discovered was that this was an amazing way to start conversations with people. Either we'd make small talk while they thought long and hard about what to write, or we would talk about what was written on the card. Either way, it cut down the usual talk you get at PAX. It's hard for a developer to throw you their standard pitch after you've called them by name and asked them to write you something terribly offensive. I talked with Dan Pearce about the frequency of Mike Bithell's tweets, shuddered at the thought of Metroids biting my nether regions with Grant Henry, and learned a bit of Austrailian slang from Tim Shiel. Friday and Saturday were packed with conversations like these, and my tiny deck box was filled to the brim with funny cards as well as business cards to reference later - plenty of which I'll be referring to as Wyatt and I write about everything we saw over the weekend. I'm still astounded that Wyatt and I were treated like actual press. Part of that was because we carried business cards, sure, but I was surprised to see certain developers remembered me either from last year or because I wrote about their game. Even if it was just for a moment, it made me feel like the vast, noisy ocean that is the internet isn't as large as I had initially thought. 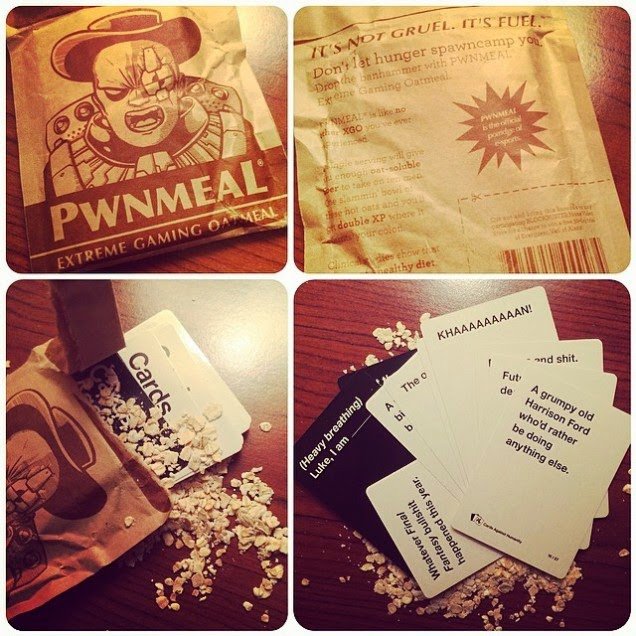 While I'm still on the subject of Cards Against Humanity - the CAH guys pulled some really sneaky stuff this year. Firstly, they put their PAX East exclusive cards in friggin' OATMEAL PACKETS. My friends and I spent an hour at the end of the swag bag line with other CAH fans, trading out our doubles and making sure every fan who wanted to complete a set got all the cards they needed. There was a collective community pile of extra cards, as well as fans with bags full of extras tweeting out and organizing on Reddit to meet up and distribute the cards to those who wanted them. At the same time, it was kind of a bummer to see so many people grabbing multiple swag bags JUST for the CAH cards - to the point that people who came to the show on Sunday barely had a chance to get swag bags for themselves. I really do love the community efforts and gags that came out of this, but I also can't help but be bothered by all the extra waste caused.

On top of the PWNmeal gag, the CAH guys also went all out for their Friday night panel. It was yet another suggest-a-card panel, which seemed standard fare for them at this point. They took up the second half of the panel with Q&A, trailers we've seen before, and talk of Pwnmeal, but it felt like they were stalling...and they were. Minutes before the end of the panel, they facetimed one of their employees...who happened to be in a printing shop in Boston. Projected before our eyes was every card that made it onto their spreadsheet during the panel being printed off only miles away from the convention center. When everyone in the audience was told to look under their seats, they found special "Panel Pack" pins. These packs were to be printed overnight and given to everyone who was at the panel for free. If any company knows how to treat their fans well, it's CAH. I already felt extraordinarily special after the Twelve Days of Holiday Bullshit, but this was an unnecessary level of awesome and an amazing way to end the first day (not to mention the audiovisual bliss that was Anamanaguchi's live show afterward). 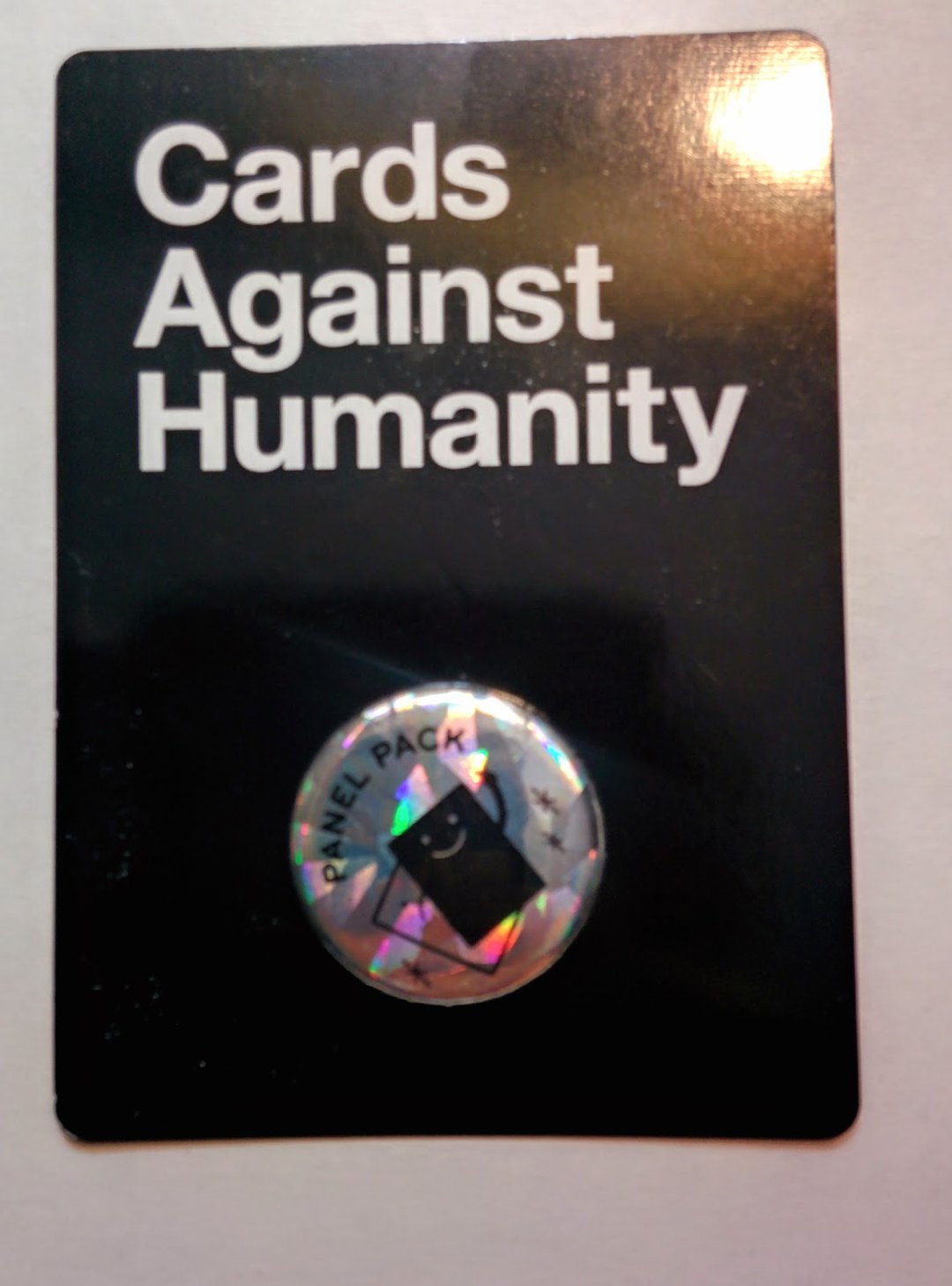 Unfortunately I had to give this pin back in order to get the panel pack, but it was nice and shiny!

Moving on to the rest of the weekend - Saturday night was...interesting to me. Wyatt got us both invited to a meet and greet for the game Grey Goo. I'll admit, at first I thought this was huge. From the way Wyatt described it, it sounded like a super-exclusive press event. I thought we'd be getting a super-special walkthrough of the game meant for writers with a certain amount of clout. Of course, as I can now see from the link, it was simply just a nice little party with some appetizers and a live demo of the goo faction in the game. Still awesome, but for a second I thought we had pulled some wizardry and landed ourselves in the land of official press instead of small time bloggers...regardless, small steps. It was really inspiring to listen to these developers, most who have been in the industry for over a decade, casually tell stories about how games like Command and Conquer were created. As someone who's just barely getting grips on how to make games myself, it really struck a creative nerve in me to want to be in the same industry as people like that. Overall, a nice event, even if I felt completely out of my element the entire time.

Well, to be fair, I was nowhere near as out of my element as I was the next morning, all thanks to food poisoning (a reminder to never buy a convention burger ever again). The last day of my PAX was kind of a wreck. I was determined to be there, regardless of how little energy I had. I was exhausted and miserable and practically in tears when we finally caught a cab to the convention center around lunch time. Partially due to exhaustion, partially due to not wanting to show my miserable face on the expo floor, I found myself at the panel for the Indie MEGABOOTH. Honestly, it was exactly what I needed. I highly encourage you to follow this link to the Polygon article covering it. I sat in the back of the room, feeling vulnerable and defeated when Christopher Floyd gave these words:

"My advice would be that, what I've learned over the last millennium (I don't know, however long I've been doing this), is that nobody knows what they're doing," Floyd said. "There is not a single person I've ever met in this industry who's like, 'Yes, I understand completely what is happening right now.' If you want to get into the game industry and you're like, 'Maybe I don't know enough,' then you're ready to join us." - Christopher Floyd, quote from Polygon. 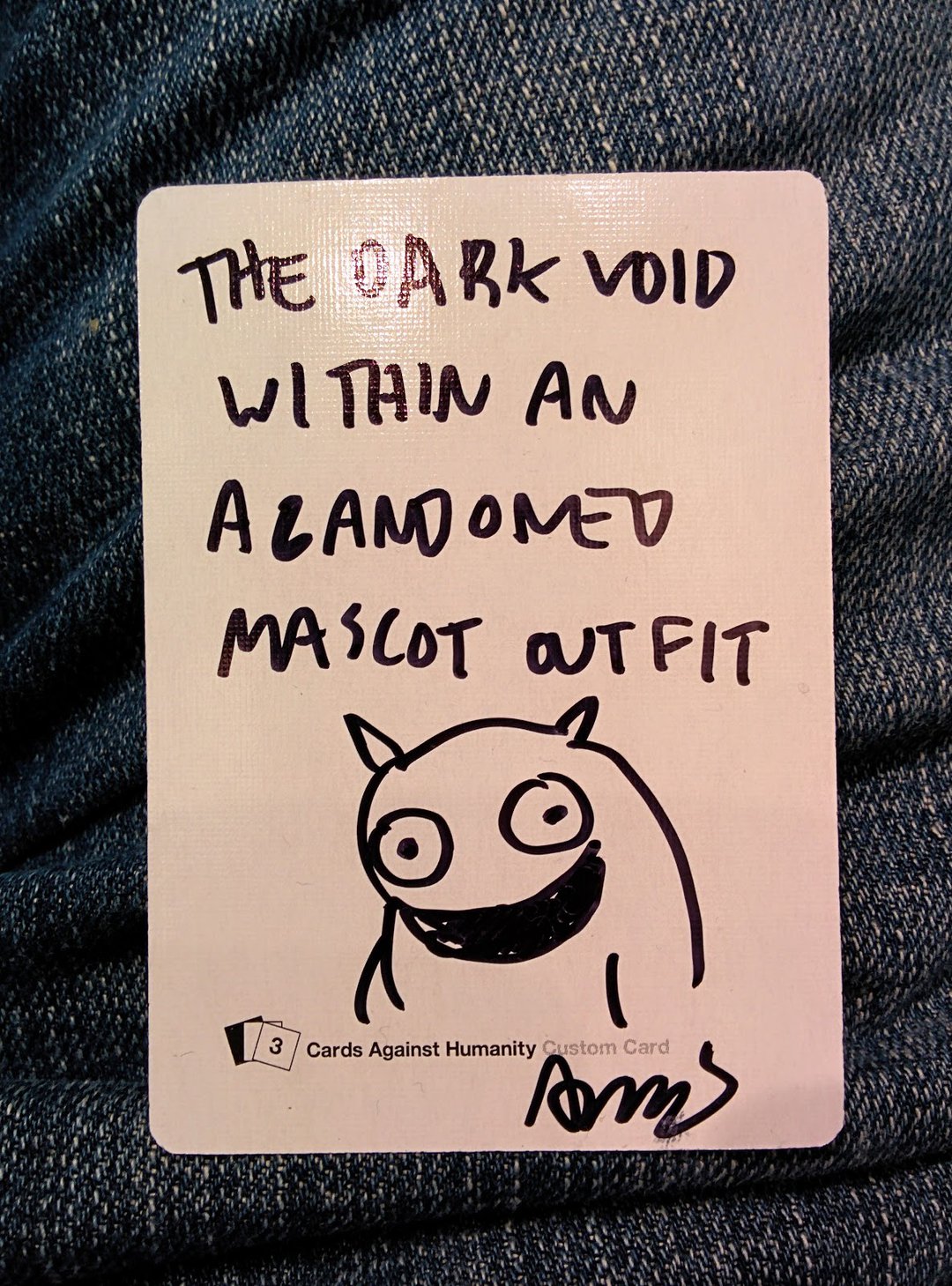 Part of the reason I'm writing now is because I decided to call myself a games writer. The one hurdle I've had in actually making games though is that I don't feel I have the experience - which is pure crap, honestly. After simply a year of writing, the exhibitors of PAX treated me like press. Sure, I didn't have any appointments or special treatment, but when I told them I was a writer they encouraged me to keep doing what I was doing. I know they believe that same philosophy applies to games because that's what got them to the expo in the first place. This panel made me realize that I may have been waiting for an opportunity to come that is never going to on its own. Once I decide to take that first step and actually finish a game, though? I'll be halfway there.

And finally, when you're sick and tired and all of your effort seems like it has gone to waste, ask Abby Howard to draw you something. It might lift your spirits just enough to get you back on your feet.