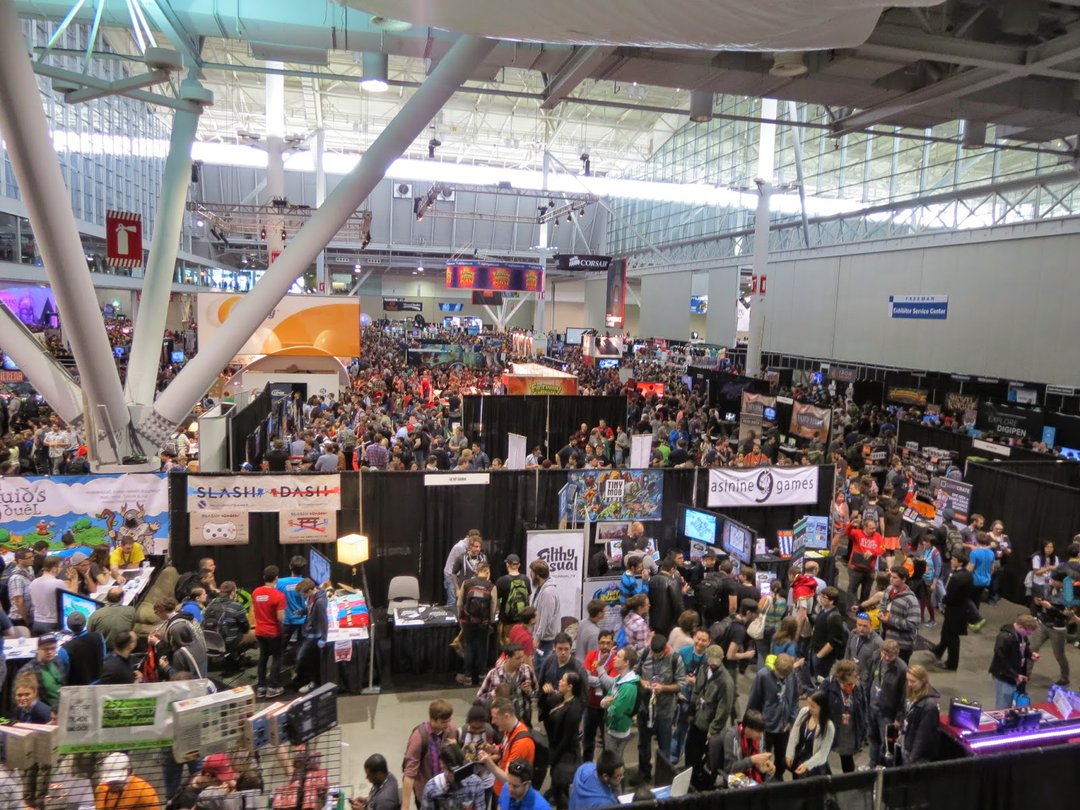 Last weekend is still sinking in: Not just one conversation with a developer, or one particular game experience blowing me away. Its not just one piece of gaming loot or a special prize that I'm having finding myself still digesting, but the full experience of the convention, the full package that I brought home, exhausted but happy, during that long drive back to New York.

This was my third full PAX East, and it was different. It was something both familiar and fun, but it was also new and paradigm changing. I didn't think it was possible, but I love gaming culture even more.

Getting to go for the full 3 days helps, as well as having a budget. Planning out panels I actually wanted to go to, figuring out what I wanted before stepping foot into the convention center... I had to talk to the awesome Megacon games about the MERCS: Recon Kickstarter, for one. I had heard rumors of Thornwatch being playable, and wanted to do that. I knew there was a Netrunner tournament, and as someone who has recently become a huge fan of the game, was getting excited about jumping right in to that as well.

But lets be honest - as soon as you get into that line... you know, the line with an uncountable amount of people, smushed together, getting more and more excited as the show floor opens on Friday morning? All those plans go out the window. Excitement takes over. Hope for grabbing that one perfect game or experience. Now, this year, to top it all off? Hope for getting that one moment during the convention, where I can get what I need to write a good story. 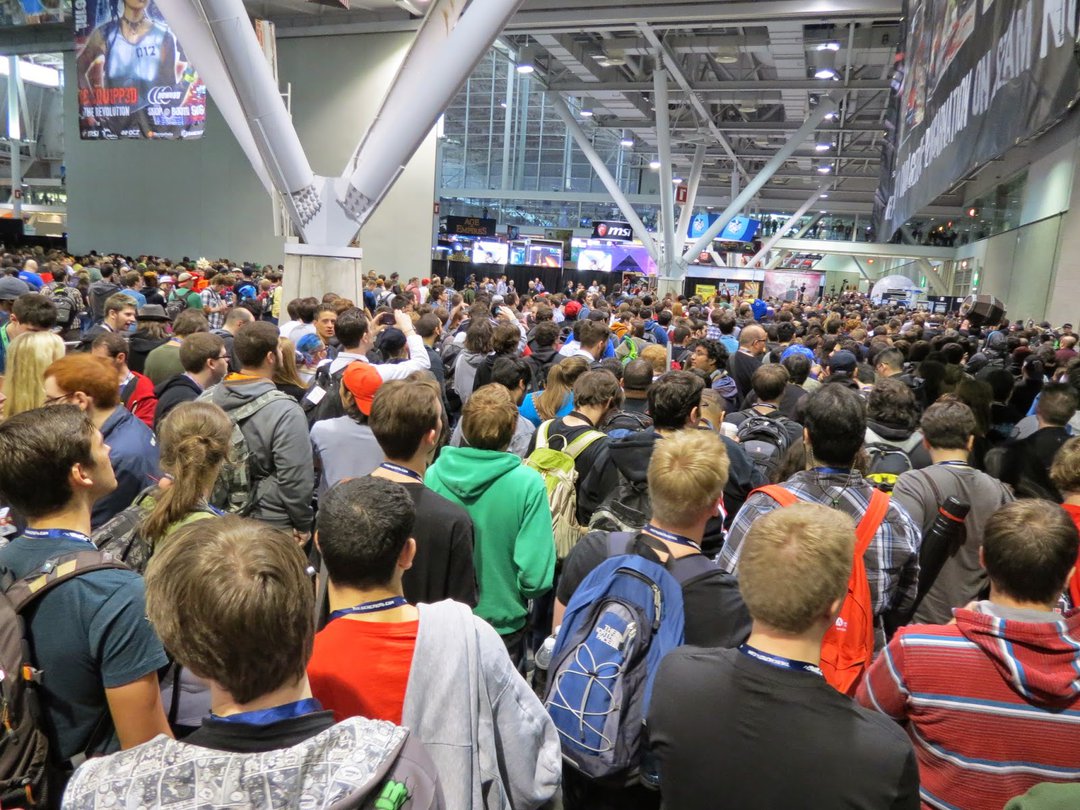 That moment, right before getting to the event itself.

I had waited a year since the last expo to come back. There was a reason: as I had left the last time, Zoë and I had just made our plans to get more involved in the gaming world we both loved and grown up with. To make Sprites and Dice, to try and write about games, to get more involved. What I wasn't expecting was to end up somehow loving being a gamer even more by the time this Penny Arcade Expo rolled around.

The realization came quick - when I passed out, gingerly, my first few business cards. Suddenly I had a few in return from different booths. I played the games, like the wonderful Orcs Must Die: Unchained, and surprise new favorites like Lichdom, and I had a blast doing it, but suddenly I found myself doing something brand new - talking to the developers. Sure, I had done it before, but it was to find out about the game, and when it was coming out. Now it was different - I found myself more wanting and more willing to hear their stories. Asking about what it was like to make the game. What inspired them, what led them to this moment here on the PAX East floor. Were they hoping for their Kickstarter to take them off the ground, or were they excited to have just released the game? 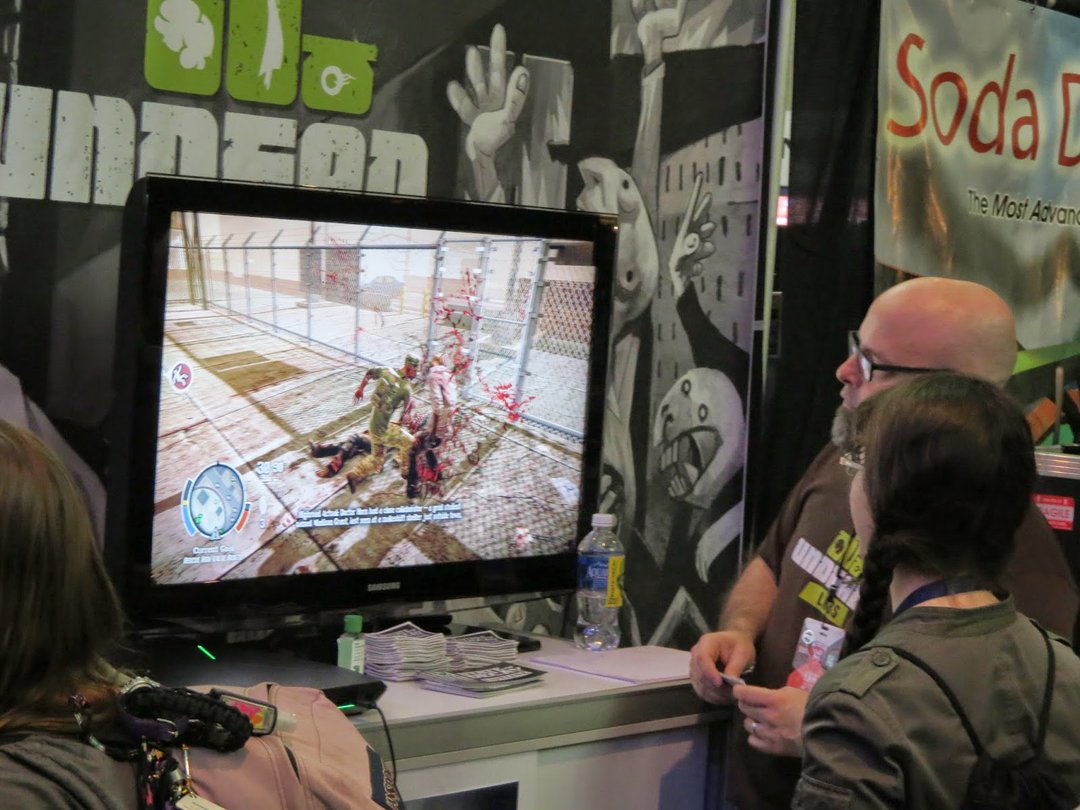 One of my friends getting taught State of Decay firsthand by a leaddeveloper.

Friday around noon is when it hit me - stopping off at the State of Decay booth, one of the first games I ever reviewed here on the site - it had the president of the company and two of the lead designers for their new expansion sitting in front of televisions, just waiting to show you the game. Where I could gush about how awesome that one game mechanic looked, or ask why they used a particular art style. How they improved on their last game, and laughing about old glitches. Shaking my hand as I left the booth, making that connection, that association - seeing the faces behind the games we play hour after hour.

I shook a lot of hands this Expo.

I'll try to get through as many as I can. Knight Squad was something not even on my radar, but yet I know I'm going to buy as soon as it comes out. This was the convention that made me cry for not having more money and Kickstarter awareness - How did I miss out on a game that seems perfectly tailored to me as Darkest Dungeon? Of course, there is always Dragon Fin Soup, where I can play an RPG of a drunken Red Riding Hood. Hands of Fate is one game I saw near the end of the show that again, I can't wait for - mixing cards and action RPG in a simple, fun looking package. 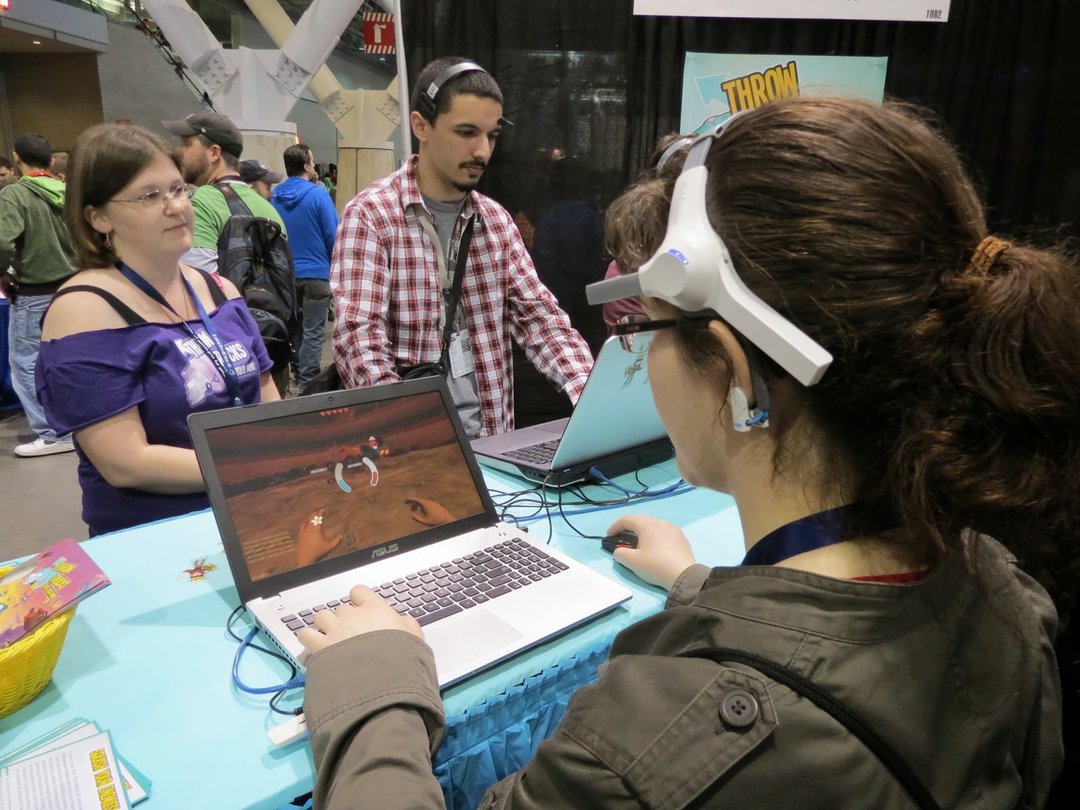 So a First Person Shooter you play with brainwaves?Shut up and take my money!

Only scratching the surface. There was World Zombination for IPad lovers, enough new rogue likes such as Delver's Drop to keep me busy for a year, and then there were games that blew my mind: I need to get a copy of Throw Trucks with your Mind if just to experience a brand new way of playing games. Of course, There Came An Echo is a squad based game that you control with just your voice, and feeling like a military commander is a penchant of mine...

That was just the indie booth. Or mega booth, or just what felt like a third of the show floor. Zoë and I have met several times since the end of the convention, and we both agree, the real winner here wasn't just one game, but instead Indie games as a whole. As Nintendo and other large companies chose not to make an appearance, for every one large booth they would have had, eight or more small companies and garage programming duos were able to show off their wares, and what they had to offer.

There were so many games, so many games in the Indie section alone that I couldn't get to them all. It felt... I don't know how to describe it - victorious. To see so much passion and hope and aspiration in one place. The polished booths of massive corporations are a monolith to gaming conventions, ones such as Bethesda and Ubisoft, ones where lines were always two hours long just to see the game - but to see the indie booths get just as much attention, to see more and more people just excited to see what developers and designers are trying to do, ones they can talk to up close and personal, is heart warming.

There's a part of me that feels like I'm along for the ride too, now that I've been to several of these. I remember when Supergiant Games was showing off Bastion with a small booth in 2011, with only several screens and some couches, just excited to have a few people sit down and play with them. This year, I didn't have the time to wait on their line to play Transistor. To see Robot Entertainment go from a small booth with two regular sized computers to a full display with epic murals displaying their art in three years makes me grin. 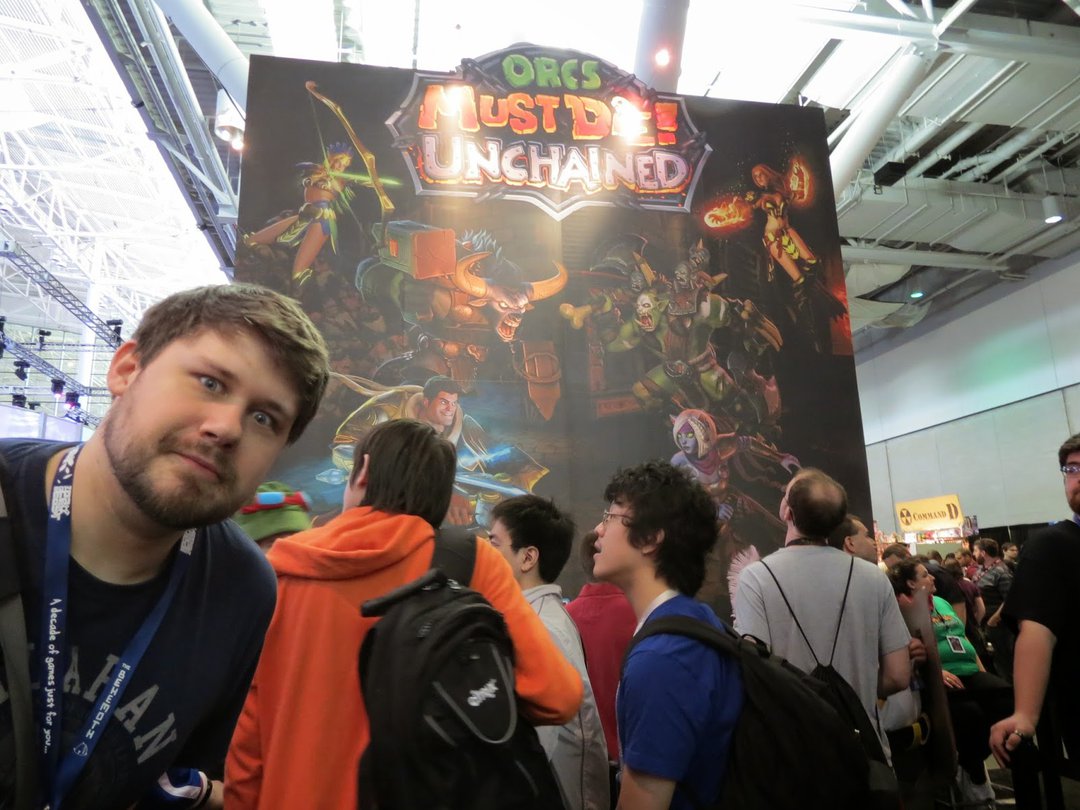 I wish I had a picture of the first Orcs Must Die booth from 2011.I assure you it wasn't as epic as this one.

It's not all just about that - the rush of new games. There was so much more at PAX, and so much more I didn't get to experience. One of my college friends got to work the Diversity Lounge as an enforcer, and while I didn't get to go, every person I talk to about it has a strong opinion of it. There were panels that shared brand new games, like Beyond Earth, from an old franchise that I've loved since I was ten. I got to go see a panel that talked about one of my real loves, Dungeons and Dragons, and how the Tabletop RPG started in the 70's and continues to this day, right alongside the flashy video games. 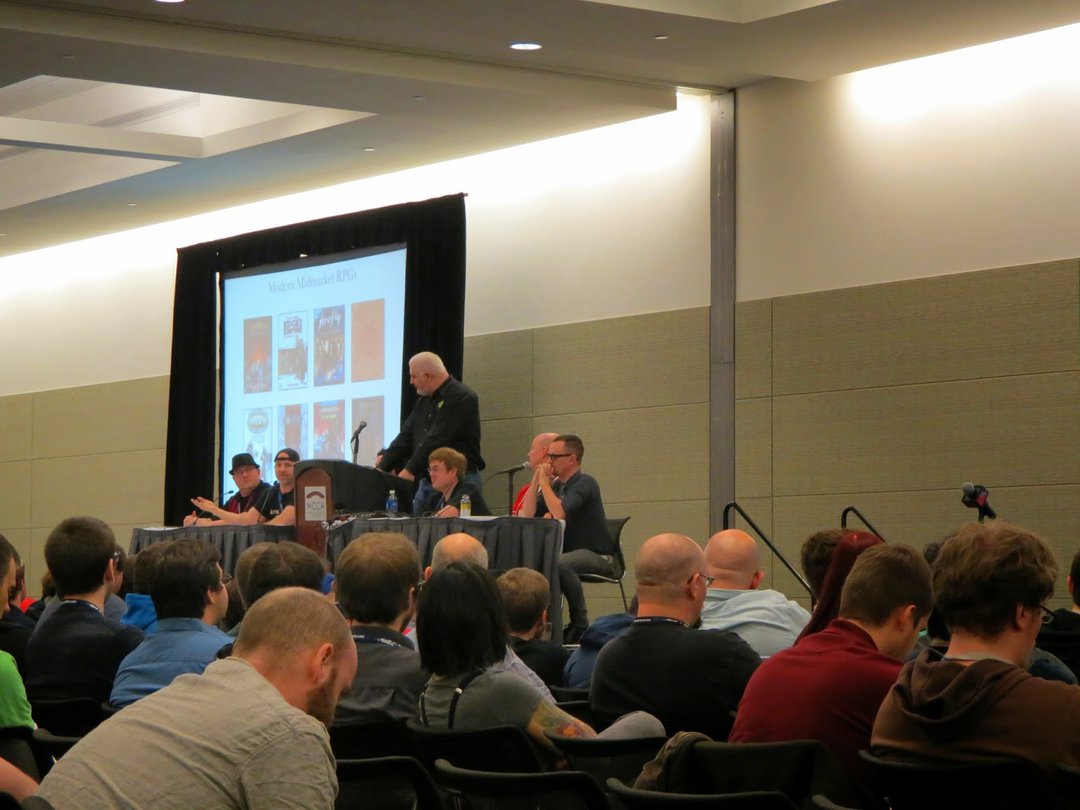 Panels aren't as showy as the Expo floor, but can bejust as rewarding.

I managed to sit down and play Smash Brothers with my roommate from college, revisiting a scene from a decade ago. I got to sit down and play games I had been curious about for months, like the amazing tabletop game Rivet Wars, and introduce others to play through of Shadowrun. I got invited to a party with the developers of Grey Goo, and was practically star struck as I realized the people who were making this game helped develop my childhood - old Westwood studios folks who made the first real time strategy games. Hearing about all the stories of how the music for Red Alert was made straight from its sound director, Frank Klepacki, of what inspired and brought them to make these games they way they did, was an experience I wasn't even anticipating this Penny Arcade Expo.Where do I even begin trying to cover and write sufficiently all of these amazing games, all of these great moments? How do I even end this post, this rambling litany of amazing games, still awaiting to arrive? 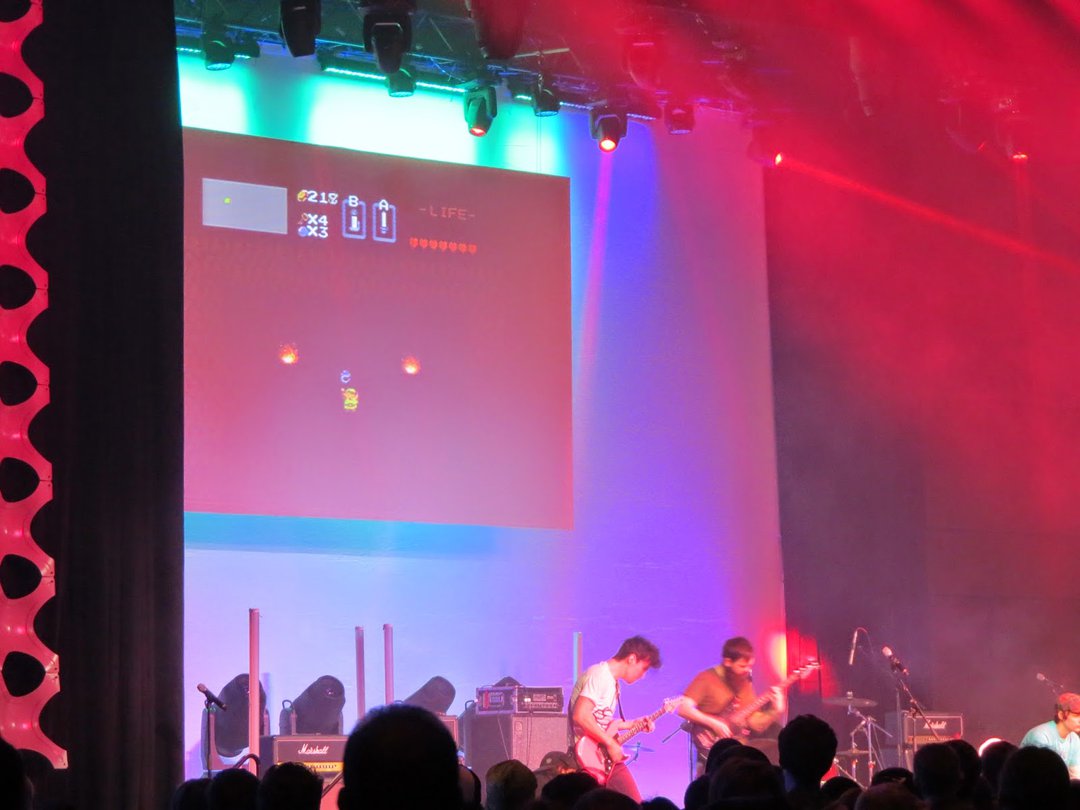 And I haven't even had time to talk about the concerts.

Now is as good a time as any. I have at least three drafts started for games I saw this PAX already started. I have a pile of game codes and miniatures I still need to unwrap and sink my teeth into for my own enjoyment... and I know I have a few dozen more articles left to start just to even to begin to scratch the surface of everything I saw. For everything that I was able to get from this amazing convention, expect me to try and give back - 2013 inspired Zoë and I to make this blog. 2014 has galvanized me to make it better, more informative, more thoughtful, more passionate for this hobby we all share.

It was a good Expo, and now with new aspirations and new goals to work towards, I can't wait to see what the next one will bring.