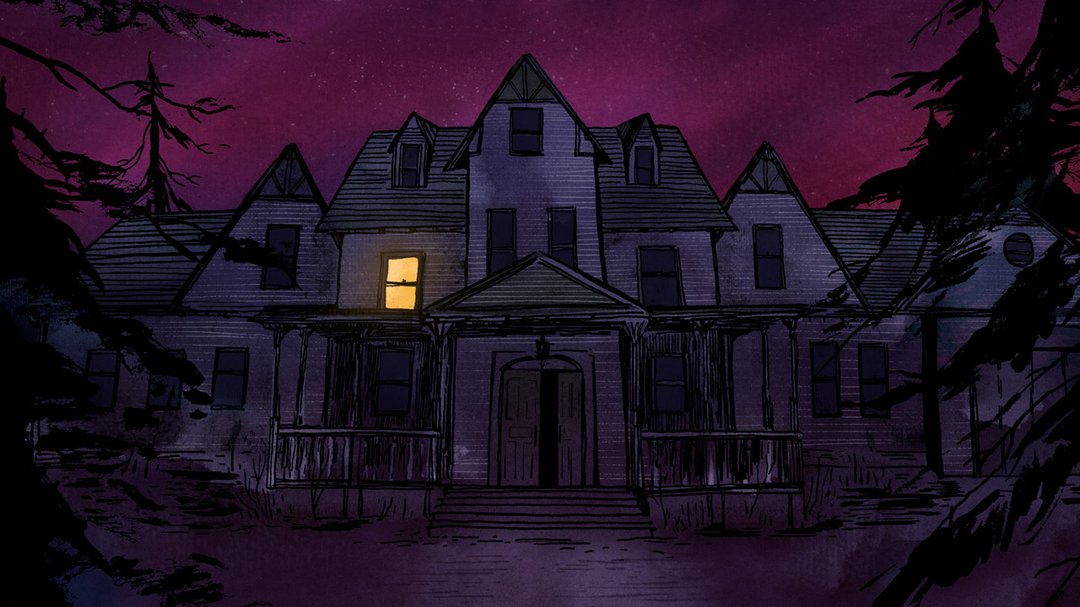 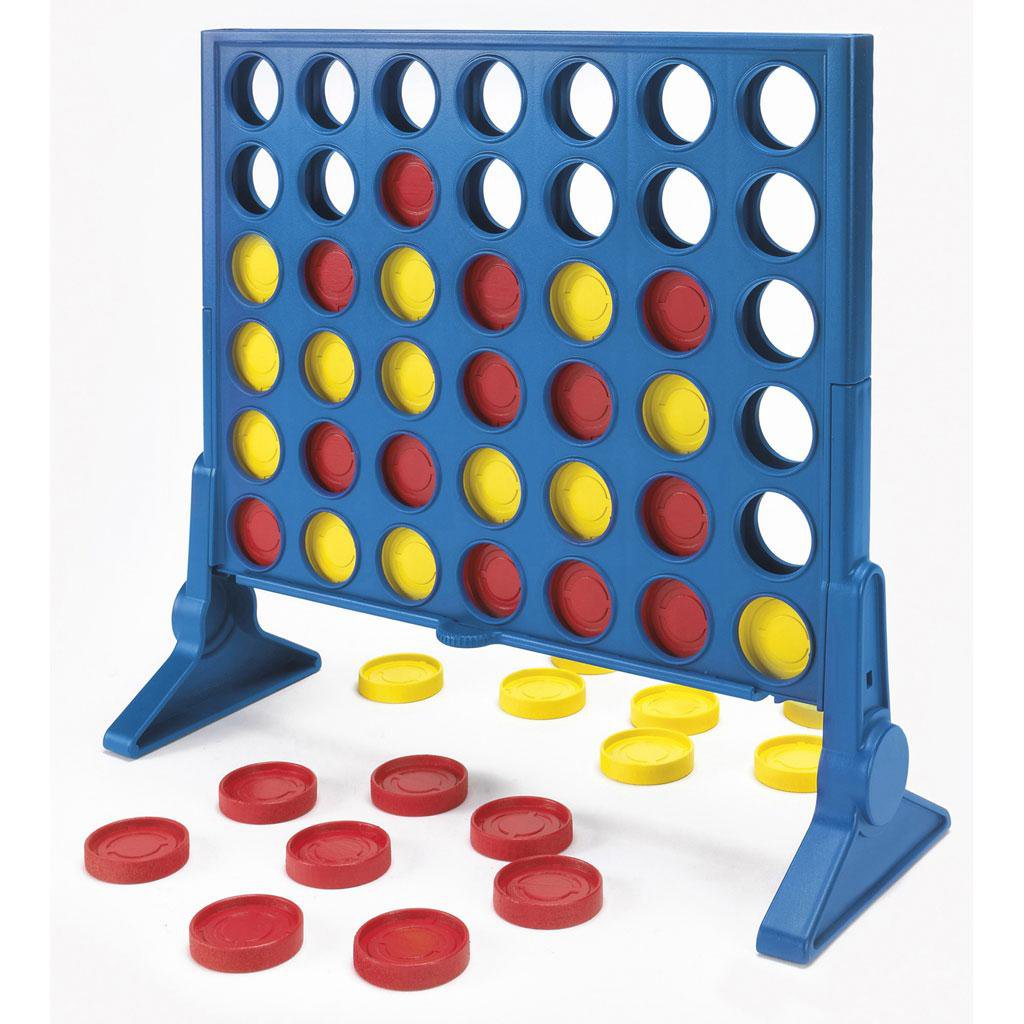 Connect Four has been totally solved. The first player will always win if they know the right strategy. It never changes.

Can you spot the difference?

The distinction is that games offer the control of choice. Player decisions alter the fundamental experience. If the user has no meaningful input to impact the course of events or change the outcome, then the pastime you are engaging in is an activity.

Now before you go into the comments and call me a fart chewer, I'd like to point out that I really love activities. When I experienced some off the narrative-focused computer applications like Gone Home, Dear Esther, and The Vanishing of Ethan Carter, I enjoyed the shit out of them. I'm a narrativist at heart and a good story does more for me than finely crafted gameplay. Novels (both visual and dead-tree versions) number among my favorite hobbies alongside games and movies. Lacking choice does not make something intrinsically worse, nor does it qualify as better by delivering a more focused experience devoid of fuck-ups on the user's part. The distinction is important because it alters the fabric of the narrative by either withholding or granting control over the weft and weave of the story. Choice both personalizes and dilutes the events as interpreted by the audience.

I'll grant you that even the most clear and straightforward of books is open to interpretation. When we observe Harry Potter growing up each reader will take something unique away from it, but the ending will always be the same. In contrast, when we follow the space opera of Mass Effect and see the journey of Commander Shepard unfold, there are significant and deep changes that the narrative will experience at the hands of the players. There's a Shepard for each player, and each is different and personalized to that player in a way that Huckleberry Finn can never be for his readers. Again, that isn't innately good or bad.

Interactive narratives explore the medium of storytelling in a way that was only glimpsed at before the advent of personal gaming. Sure, we all loved R. L. Stein's choose-your-own-adventure Goosebumps books, but they didn't quite grant us that intimate and visceral personal narrative that taking control of the Hero of Kvatch in Oblivion did.

I'm not here to gush about the open-ended roleplaying game though. I want to discuss the merits of the linear and atmospheric interactive stories. (I'm going to call them "walking simulators" because there's only so many times i can jumble "experience" "narrative" and "non-interactive" together before I want to go apply for a bachelor's in philosophy.) I feel that well-crafted walking simulators allow for the exploration of more precisely defined narratives than can be found in traditional novels, simply due to the limits of that medium. After all, haven't you ever read a book and had an image of the character in your head based on the author's description, only to see some official art and experience the dissonance of the character being different than YOUR hero?

The atmosphere combined with the delivery of the content was highly engaging. It encouraged the player to move along with the narrative, sampling as much or as little of the supporting details and secondary plots as they desire. Hearing Sam's narration added a layer of characterization that would be lost if it were only delivered in writing. The actual narrative wasn't extremely revolutionary, though it did strike me as a good entry-level story for people looking to explore character-driven plots in games. As a static observer, the audience completely fails to participate in the narrative as all of the events have happened before you even step onto the front porch of the house. It's like reading Dune, or watching Apocalypse Now; you just absorb the plot without interacting with it. However, Gone Home is still a fun experience. 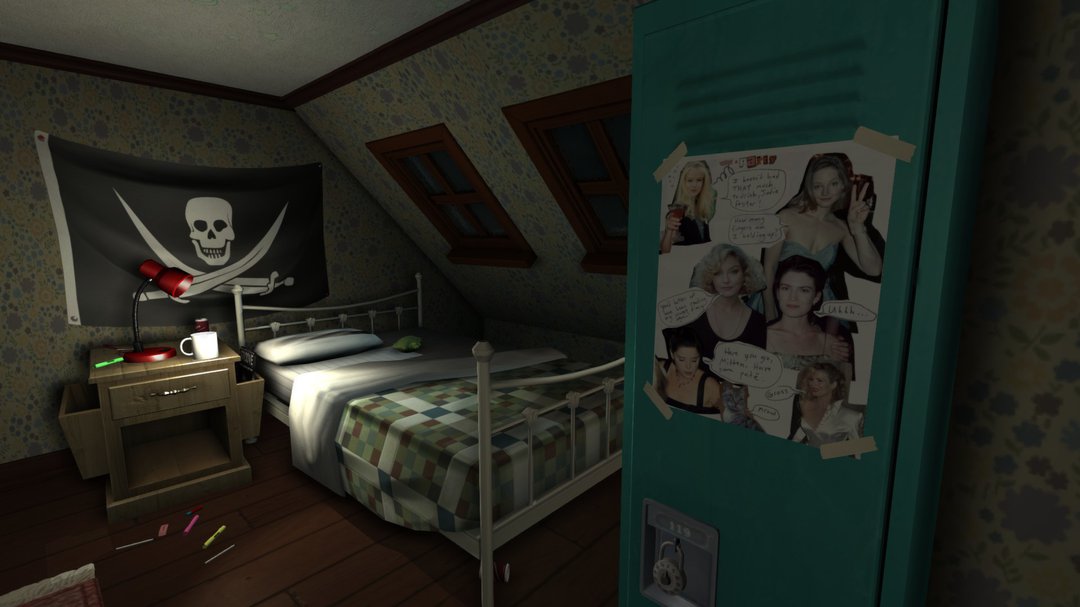 It's a very real story that just happens to be fake.

The Vanishing of Ethan Carter

The assets in this story are gorgeous: The scenery, music, and lighting all come together to create an incredibly vibrant setting. Several times I looked out over a vista of a dam, or the sun setting behind a mountain, and thought to myself "This would look picturesque as hell if I ran this screenshot through an oil filter."

There were minor puzzle-solving elements which, while they were well designed and enjoyable, I didn't feel that they contributed to the narrative beyond padding out the experience. There was no risk of death or failure, and no change could be wrought upon the narrative by the player. There's only one ending with minor variations in how much you have to backtrack to solve missing mysteries. The narrative itself is mysterious and a little out-there while maintaining an edge of poignant reality that makes each of the flawed characters relatable. I was able to guess the ending, but that's only because I'm a huge fan of that particular flavor of finale. I won't spoil it for you. 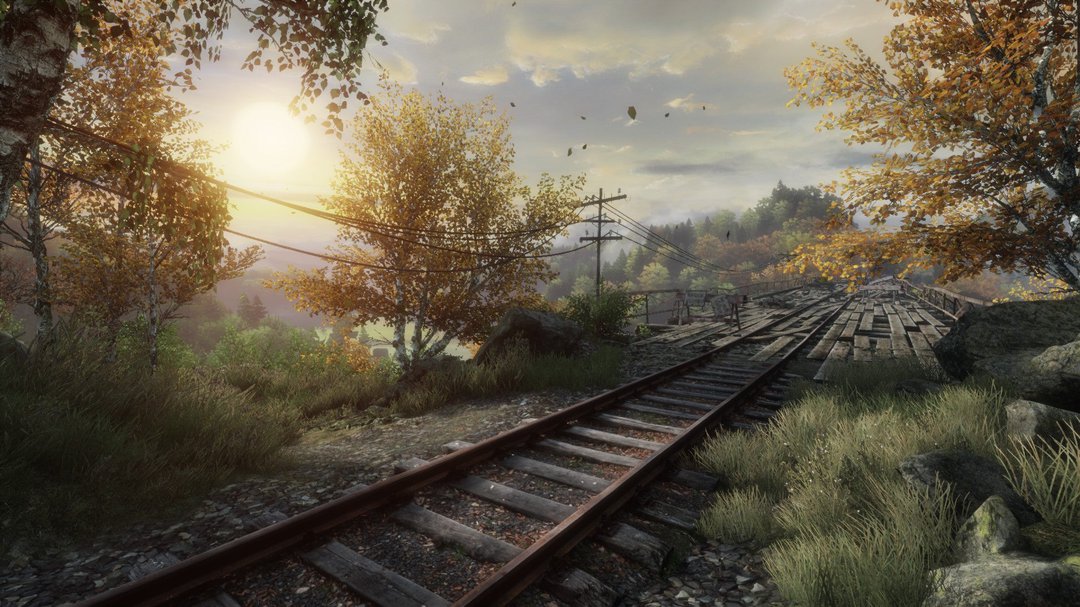 Sublime craftsmanship of the scenery creates a palpable feeling of loneliness and isolation.

It's been a while since I sat through this one. I did some research and this seems to have been one of the first western walking simulators, preceded only by The Stanley Parable. That was so chock full of choices, and other writers have explored it thoroughly, that I'm just going to leave it alone for now. Just as in later walking simulators, Dear Esther used the pre-rendered island setting to deliver the atmosphere without describing the environment. The narrator doesn't wax poetic about the eerie and alien cave-scapes, only tangentially mentioning the island itself as a lens through which to view his own rebirth. What would take reams of paper and gallons of ink can be conveyed directly using two gigabytes of data. We, the audience, can see exactly what the creator wanted us to see without any interpretive misunderstandings of the written word. Back when this released in 2012 it was a novel idea (no pun intended), and thus somewhat derided as a bad game.

In truth, it was a bad game. Viewed as a "game" it was pretty boring, featuring an unchanging landscape with no challenge, meaningful decisions, or consequences to empower the player. That's because Dear Esther isn't about the player at all, and that was a new concept back then. The story is about the narrator and his emotional turmoil, pain, and eventually his release from the inexplicable purgatory of the island. My entire point is that these walking simulators shouldn't be judged on their game merits, though I may be three years too late for this to be a shocking revelation. 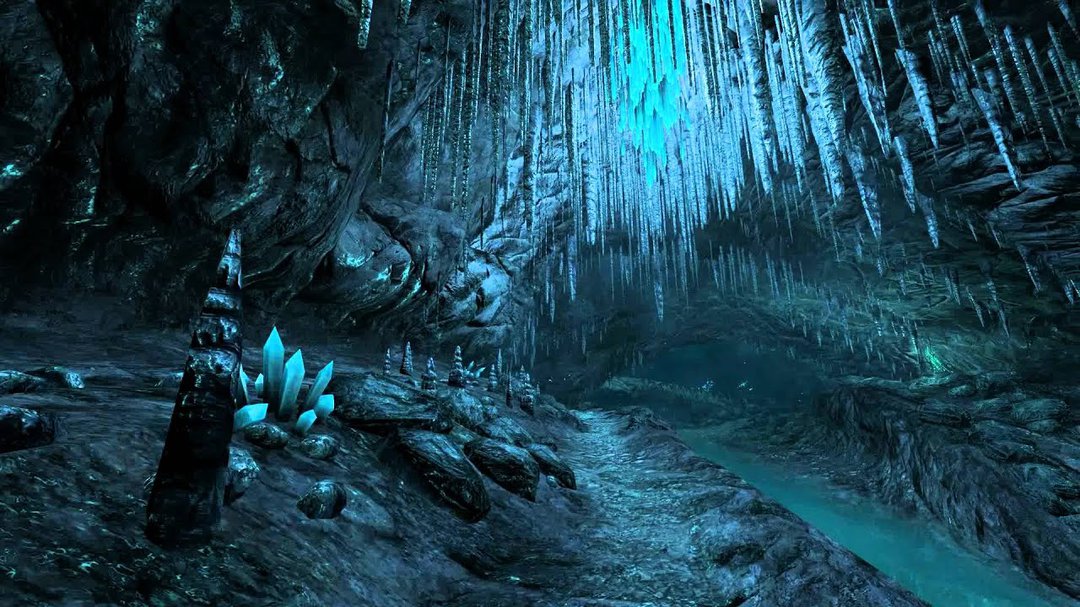 The line between metaphor and reality is thoroughly obliterated in this game. Its not too late to try it out.

This game was what got me thinking about the notion of choice in walking simulators. The Talos Principle is a genuine game that offers choice and consequence for the player. It's a pretty dense philosophical perspective on human nature and the intrinsic value of consciousness, couched in a Portal-like puzzle game. Plus there's neat robots! I like robots.

The true depth and artistic value of the narrative is up to the player, but I think it's a real bang-up job. Each of the puzzles are well designed with some real stumpers. The plot is pretty highbrow, dealing with an omnipotent AI god in a biblical parallel that doesn't feel strained or pretentious. You get to engage in some conversations that really pick away at the philosophical shell of your understanding of the nature of self, unless you just feel like obstinately trolling the shit out of the AI in charge of the archives. It's fun to discuss difficult concepts of self-awareness using language that doesn't leave the average user feeling patronized. Wrapping a philosophy textbook in a puzzle game is an amazing way to examine these multi-layered concepts with a wide audience in such a way that it doesn't make you want to get a Bachelor's in Philosophy (and consequently a job at Starbucks). 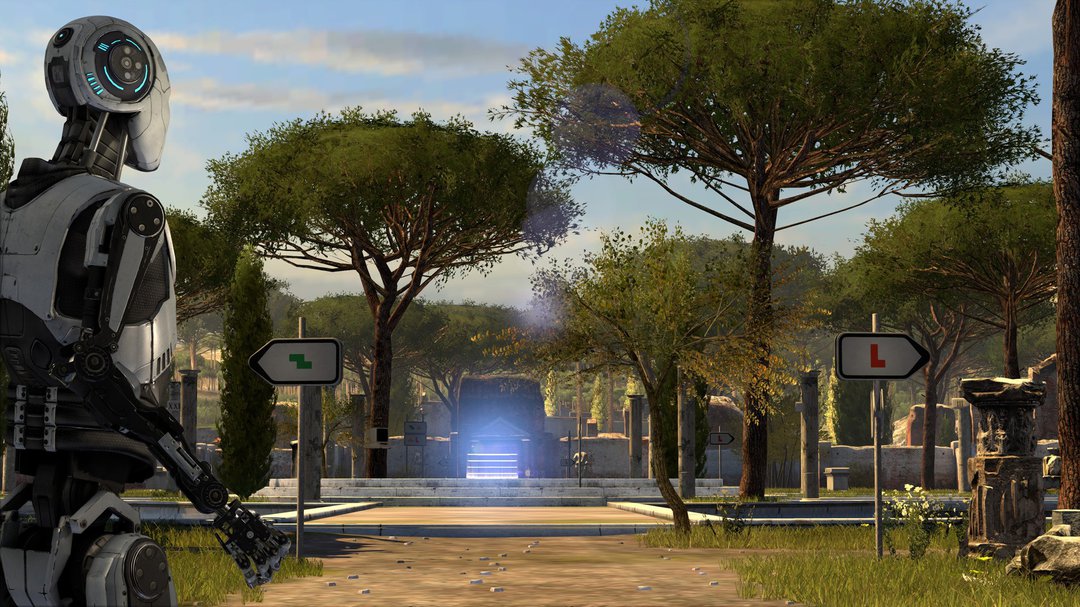 You may disagree (which is cool, I don't think you're literally Hitler for disagreeing. Maybe Mussolini), but I consider these stories and games as more evidence for the "video games as art" argument. Managing your expectations will be really helpful if you want to enjoy some of these more novel-like non-games. As the prevalence of electronic media continues to eclipse paper media, I believe that we're going to see more walking simulators with better graphics, music, and narratives. Are there any that you've found that you'd like me to check out? Tell me in the comments.

If I had to sum this all up, I suppose I'd just like to say that that while there's a massive difference between games and non-game interactive media, there is no way to qualify one as inherently better than the other. Bashing something because it's a walking simulator when you were expecting a game isn't fair, just like complaining that a game like Devil May Cry has a weak story is unfair. There's a time and a place for both games and activities, and we should love them both for what they are, not deride them for what they weren't trying to be in the first place.