Undertale's Storytelling is the Best I've Ever Seen 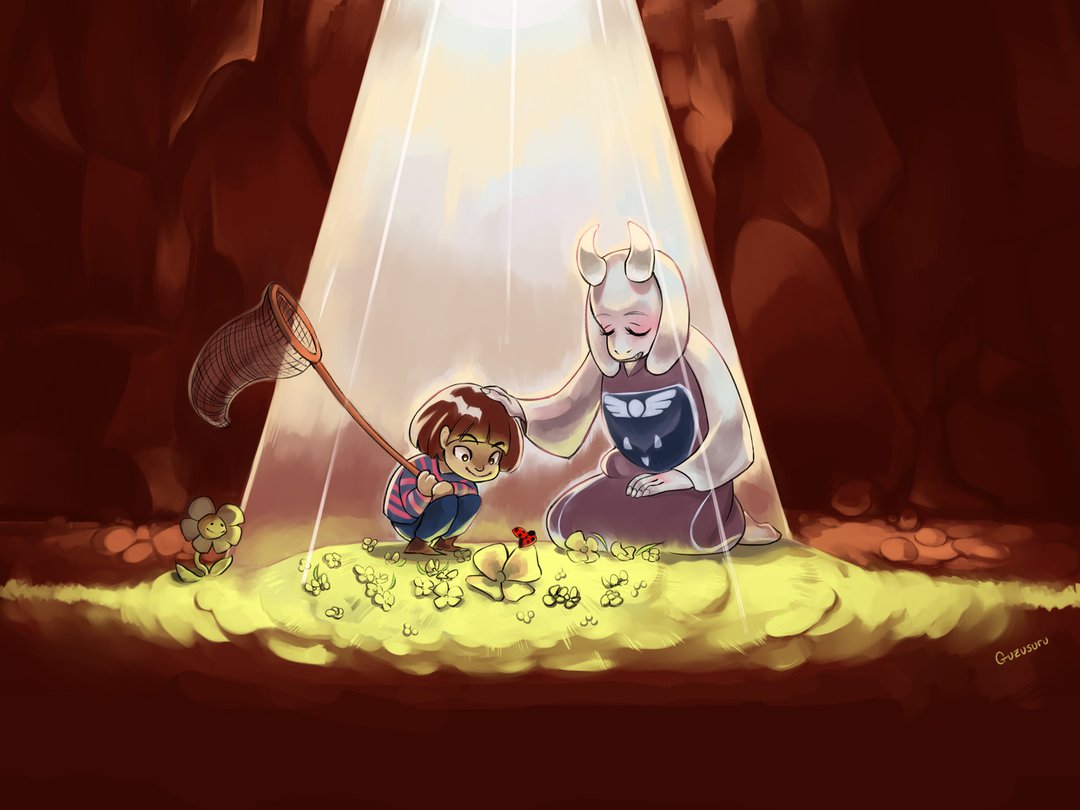 Undertale is the latest indie hit, a relatively new RPG that's available on Steam, and talked about basically everywhere on the internet. It centers around a protagonist of uncertain name, age, and gender, almost a total blank slate. All we know for sure is that this person is young enough to be referred to as "child". This is, without doubt, a deliberate setup to create a character that is both easy to relate to and in a vulnerable position. It's a perfect recipe for empathy, and helped to inspire a large and still-growing fan base. 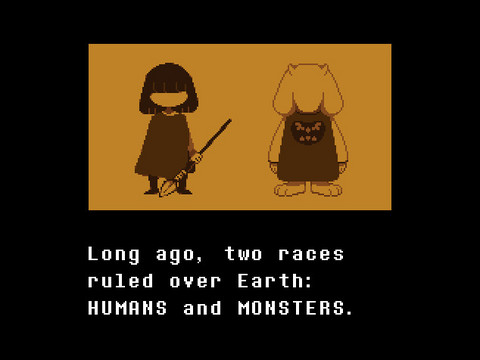 The game begins when this child falls into the Underground, where a race of monsters was banished and sealed after losing a war against the humans. That's about all the backstory you get. You then have to make your way through a confusing new world where it seems like you always have some information, but rarely all of it. You are helped or harmed along the way by monsters whom you can help or harm in return.

Its strong characters, quirky humor, and penchant for turning tropes on their heads have already given Undertale a well-deserved reputation as a gem of indie gaming. There's a reason why what sounds like a simple RPG premise is being called "brilliant" and even "revolutionary".

As I said before, Undertale hardly ever provides you with all of the information you need, and it never does so easily. It’s as much a puzzle game as it is an RPG. The decisions you make, sometimes without fully understanding them, impact the game as a whole. Dialogue options, enemy encounters, and the overall plot and ending are affected by what you do throughout the game.

Undertale also has a great cast. Setting aside the largely-silent protagonist — your actions speak louder than words, after all — it has very strong characterization. Each of the main characters has clear desires, motivations, and relationships to (and sometimes with) the others.

Obviously there are NPCs in other games, but what can set this game apart is that you might be surprised to quickly find yourself feeling for them. For instance, one of the first characters you meet is a kindhearted, motherly monster named Toriel. From the moment she finds you in the Underground, Undertale sinks its claws into your heart and doesn’t let go. It's a long way from the "here's your quest, now go," NPCs of many other games.

Part of why Toriel works so well is because, at this point in the game, you as the player do feel a bit like a lost child. I’m not going to spoil anything here, but suffice it to say that you’ve just come through a fairly disturbing experience. When Toriel shows up to protect and guide you, it really is a relief. 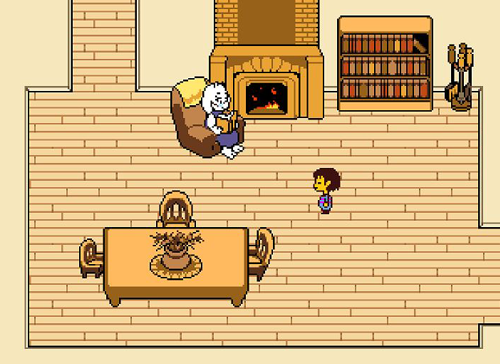 The game uses simple, outdated visuals, but it lets you appreciate the characters and ideas more because of it.

The moment I knew that I had to give huge props to this game came about half an hour in, when I made a bad decision. Without meaning to, I did something that hurt Toriel, and was surprised to find that I legitimately felt bad about it. I was experiencing real guilt because I’d caused “pain” to some pixels and lines of code. That’s how good this story is, and she’s just one of around half-a-dozen major characters that you meet.

What really makes Undertale special though is not just the story it tells, but the way it is told. The game mechanics and the very foundations of RPGs are used as storytelling elements. For example, saving and loading your file is not just something that you do as a player, it’s an actual power that your character has. Even more interestingly, and sometimes disturbingly, you’re not the only one who’s aware of it.

That kind of meta-narrative runs throughout the entire game. Undertale isn't just about getting your character through the battles, it's an ongoing conversation with the player about what it means to have that kind of power over a world, what it is to be a gamer and a human. When these sort of concepts come to a head, that's where this game goes from having a solid story to a mind-blowing one.

As most players know, there are three types of ending in Undertale with a bunch of variations on each. There’s the Neutral ending, which gets you a very weird (but very cool) battle against whatever the heck the character Flowey turns into, then a conclusive but rather unsatisfying ending. There’s the True Pacifist, where everyone’s happy and you get a nice warm fuzzy—and sometimes a slice of pie from Toriel.

I mean, just look at all these happy faces!

...And then there’s Genocide.

Let's talk about Chara, and what an absolutely horrifying character they are. The first human to fall into the Underground; the one who ran away because of their disgust with humanity, then found monsters equally repugnant; the one who came up with a plan to tear down the Barrier and reignite the war between monsters and humans; the one who, if you let them, will utterly destroy the world. The one who is strangely reminiscent of you.

This was the moment when I knew that Undertale might just be the best story I'd ever experienced, simply because of the extent it went to drive home its point. If you give in to your darkest side, Chara will emerge and destroy the world of Undertale. I mean the actual game itself. It will crash, and if you try to come back, you’ll find that there is nothing there: no images, no buttons to press, nothing at all. Although you can eventually reset the world, you are already damned. From that moment on, there is no such thing as a happy ending for you. 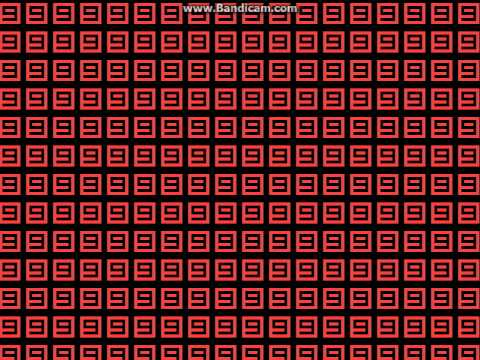 The moment the world ends.

Spec Ops: The Line played with a similar idea, that in the end it’s always the player who has ultimate control over the game. However, I find Undertale so much deeper. In Undertale , you aren’t railroaded into doing anything. You know beyond doubt that it’s you who made the decisions. You don’t end up feeling like you’re a terrible person because you didn’t understand a riddle about "making it stop" or “doing the right thing.” 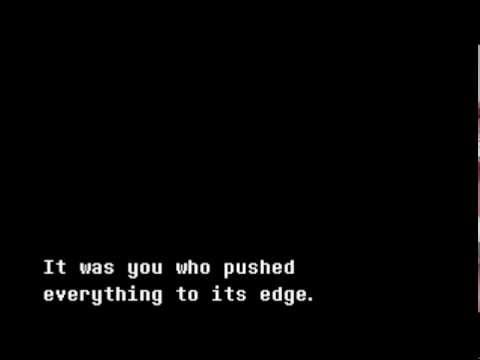 This is without even getting into the wonderfully meta battle with Sans, who knows that he’s in a game and breaks all the rules trying to get you, the player, to give up. Genocide is without a doubt the best storytelling that this game has to offer—heck, the best storytelling that any game’s offered in a very long time—and it’s almost a shame that you have to sell your soul to experience it. This game has a massive set of fans, and it's something that is well deserved just for the Genocide route alone.

If you need one last piece of evidence of what I’m talking about, someone has actually designed a program that seeks out and removes the data of the Genocide run, allowing you to continue as if it hadn’t happened. Somebody wanted a good ending badly enough that they actually went one step beyond Undertale’s meta, and tinkered with the programming itself to allow the player to undo their actions.

To those of you who skipped the spoilers, I apologize for the long digression and the relatively short article. Undertale really needs to be experienced to be fully appreciated, and it’s hard to discuss without giving too much away. If you haven’t played it yet, all I can say is that I cannot recommend a game right now more highly than I recommend Undertale.

Undertale is a game that plays you almost as much as you play it; It knows where your buttons are and is entirely too good at pushing them. When, like me, you find yourself trying to convince a skeleton that you really enjoyed the spaghetti that he made for you, you’ll know what I mean. Is it a different sort of game than those that have come before it? Yes, Undertale is deep, artistic, and meta in all the best ways. If you haven’t played it yet, I sincerely urge you to do so. Just, when you do…

Agree or disagree with my thoughts on Undertale? Do you want to rave about how Goat Mom is best Mom? Leave us a comment here with your thoughts, or track us down on our Facebook or Twitter so you can keep up with all of our discussions!