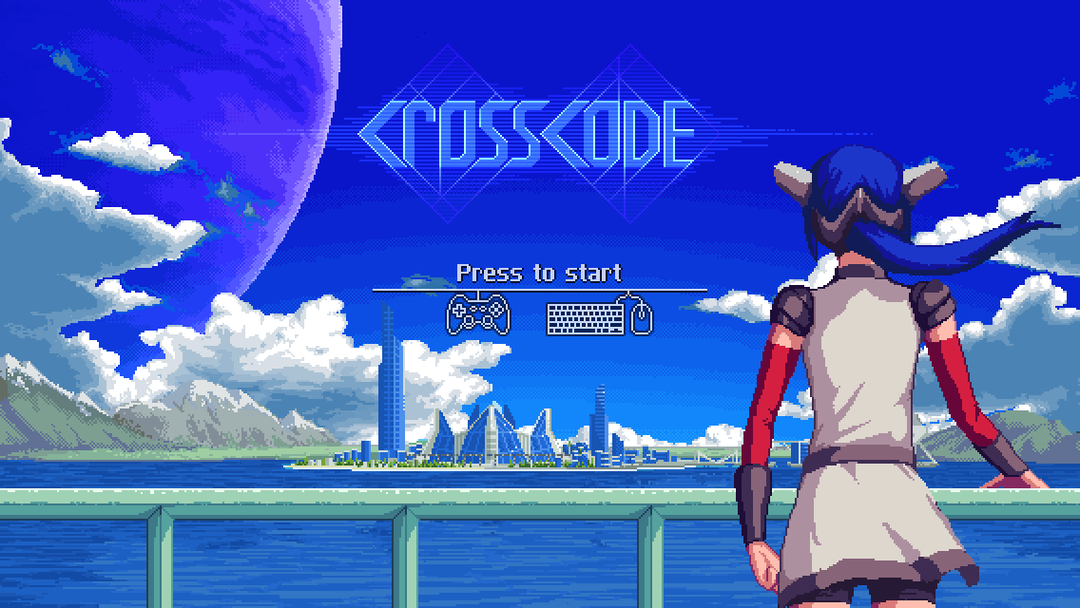 I was noodling around on the internet and I found something pretty cool. I'm a sucker for high tech settings, action-RPGs and gorgeous visuals, so when I read about Radical Fish's indie game CrossCode I dropped by Gamejolt.com and grabbed the playable demo. 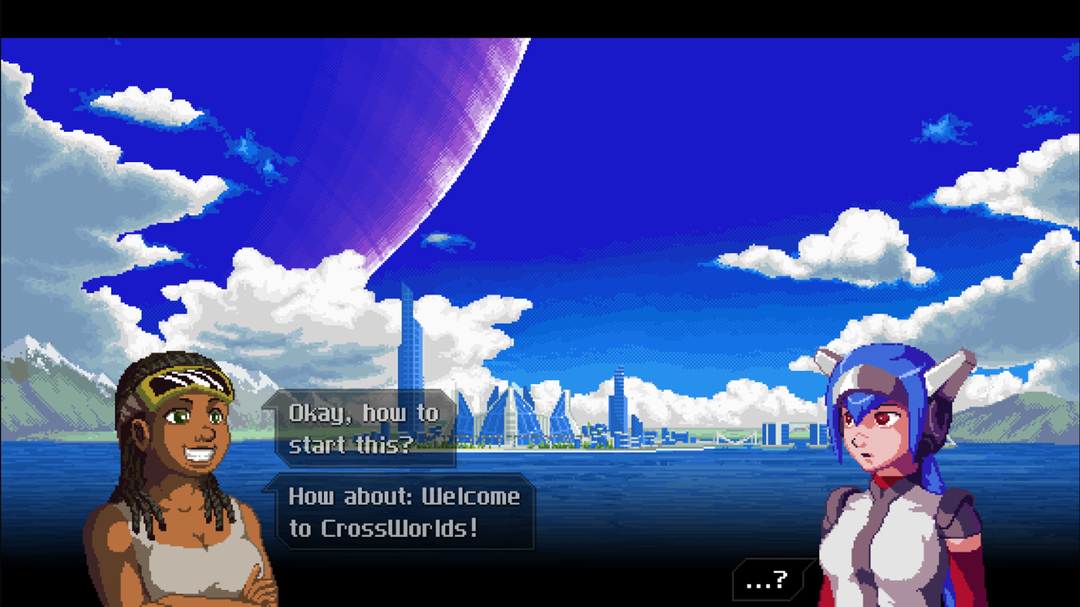 CrossWorlds is the MMO of CrossCode. Kind of like Sword Art Online, but maybe with less despair?But maybe not.

I wasn't disappointed, and you won't be either. This is a game that should be made: let me tell you why.

From the first scene, I was intrigued by the level of detail in the pixel art. Each frame was carefully crafted and the animation was smooth like silk. Pixel art is in vogue and I can't help but appreciate it; It might lack some realism but it has a lot of style. Sometimes you'll hear folks accuse pixel art of being the lazy man's version of proper 3D assets, and sometimes that's true. Quality pixel art looks great, and no one can claim that CrossCode isn't bursting with heart and charm. The demo only showed a dimly lit garden scene, a container ship, a futuristic dungeon and an outside exploring section, but it promised a dearth of exciting environments when we got to survey The Playground (more on this later) from the bow of the solar-powered ship your characters ride about on. The character animations are fluid, and it's easy to lose sight of the small details in combat when there's so much going around. The main character is kinetic and quick and controls easily. The sound design is on point, with the music complimenting the atmosphere; It kicks into a hectic beat when you're being attacked. The engaging setting drew me right in and held my attention for the entire demo.

Check out that spinning hair! More impressive that then laser-turret.

And what is The Playground? It's an intriguing "MMO-in-real-life" sandbox, with virtual avatars interacting with the live human workers that support the theme park. CrossCode manages to explain the premise without feeling too long-winded by making the main character Lea an amnesiac mute. "Wait," you might say, "that's been done before, it's lazy writing!" Well, yeah, but the silent protagonist of early 90's JRPGs are pretty far behind us. I'm willing to let Radical Fish play with the concept since the ever-present techie guide hovering over Lea's head was able to provide her with a single snippet of dialogue during the course of the demo, while promising more in the future. The amnesia line was played with in a fashion that reminded me of Persona 2, where it was an integral part of the narrative instead of a technical limitation or design decision like the first few Final Fantasy games. The drive to find out more only makes (the surprisingly expressive) Lea easier to relate to for the player. It doesn't feel like a cop-out to the plot, but rather a fertile ground from which the plot can grow in an organic manner, especially since they waste no time in presenting the player with a god-level avatar that claims to recognize Lea. I knew I was invested in the plot when I was so engaged in seeing what happened next that the end of the demo hit, it felt like a power outage in the middle of your favorite movie. 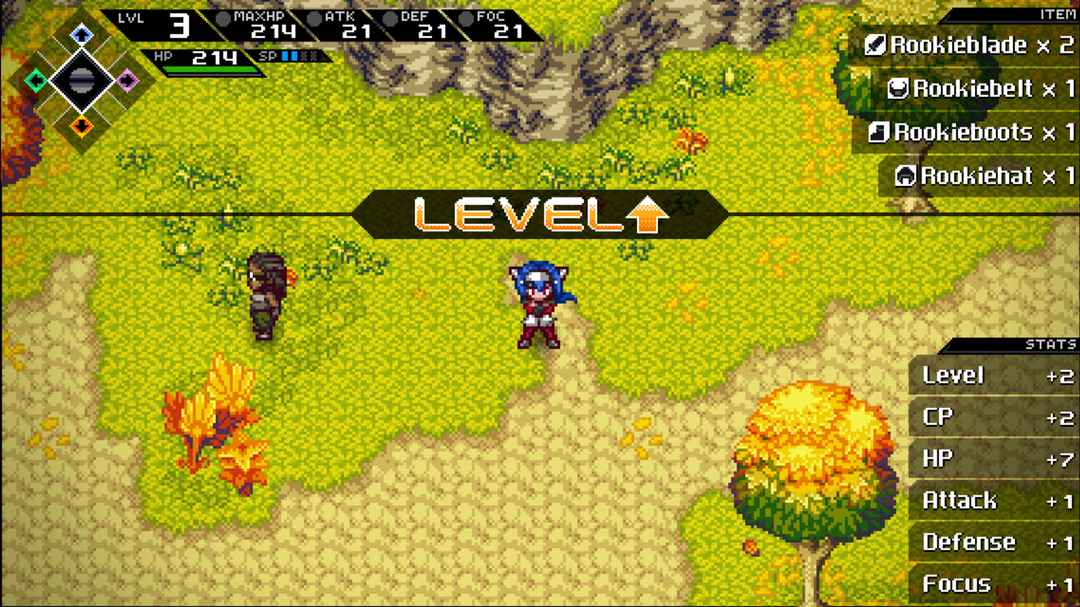 Aw man, stat buffs, yesssss. Worth all the animal cruelty to get that sweet EXP.

Combat was reminiscent of 2D Legend of Zelda games but with the added depth of being able to move in eight directions instead of just four. Fighting was flashy and felt dense without being distracting because all the game mechanics were understandable, being couched in an in-universe rules platform. There is a level-up system providing stat growth, and the Indiegogo page promises inventory management, a sphere-grid style skill system, and combat skills to keep the already frenetic combat fresh. The skill system looks like there's a grid of 36 squares, each containing maybe thirteen or so individual skill blocks. They contain stat boosts or new skills: nothing groundbreaking mechanically, but the sphere grid style has pedigree so I can't complain. It looks like certain passive skills and active skills can promote a spread of different play-styles, focusing on ranged, melee, defensive stats and health boosts. One really neat thing is that each tree grants a special ability that you can use while dashing, guarding, fighting or shooting, so you can have one of each at any given time. In addition to that, you can change your skills to switch up combat styles. For example, the ranged special ability is either a spray of weak shots or one big piercing shot and you can swap between them depending on the enemies you are fighting. It's a gem of depth and simplicity. 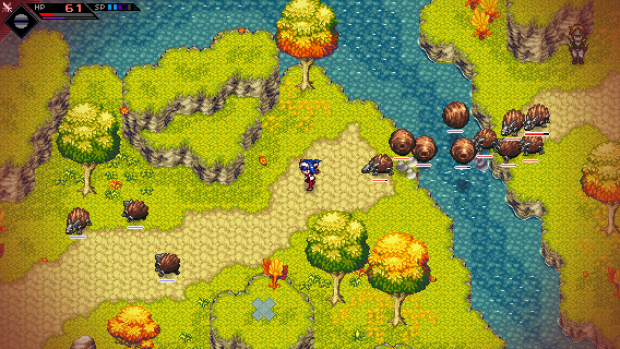 Getting your ass busted by hedgehogs. Now you know how your dog felt that summer it tried to bite a porcupine.

There's a fair bit of platforming that requires precision, as I found out while being chased through the M.S. Solar by high level mobs summoned by the mysterious godlike antagonist. There's an entire puzzle section that isn't terribly difficult but does require a fair bit of finesse. Further, the boss in the first dungeon is actually pretty hard because you have to juggle between defending yourself, using the environment to block really nasty attacks, and bouncing charge shots off the walls to hit the boss' weak spot. Using the classic Nintendo three phase boss strategy here feels like a challenge as opposed to lugging along a sacred cow of a mechanic.

This game has all the pieces needed to make a solid action RPG. It has a lot of potential and as an RPG fan I'm rooting for CrossCode to make it's Indiegogo funding goal. Try the demo here and see it for yourselves. I'm going to give this game a "tentatively excited" out of Five Stars!

If you enjoy my articles then follow me @DKjolner, I'll give you out of context quotes from my tabletop games! And check out our Patreon, our server has little server kids at home to feed.